US Representative Paul Tonko, a Democrat whose 20th congressional district in New York includes GE’s Research Lab in Niskayuna, hosted his fellow colleague from across the political aisle, David McKinley, a Republican from West Virginia’s 1st congressional district, for a two-day visit to his District that included a visit to our Lab. The trip was organized through the Washington D.C.- based Bipartisan Policy Center and is part of a Congressional member exchange initiative the Center leads to encourage bipartisan working relationships in the US Congress.

A primary focus of the recent visit at the end of August was to share GE’s perspective on decarbonization and the energy transition. Both Tonko and McKinley are members of the House Energy and Commerce Subcommittee, and both are trained engineers. Coming from New York and West Virginia, they each bring unique perspectives to the energy transition that they have worked to better understand through the Member exchange. Tonko visited McKinley’s district in the northwest corner of West Virginia this past May, where the coal industry makes up a big part of the local economy.  During McKinley’s visit to New York’s Capital Region, he met with business leaders from Plug Power to learn more about green hydrogen technologies and also was introduced to the wind manufacturing being assembled at the Port of Albany to support New York’s offshore wind initiative.

You might label the visit to GE Research a truly bipartisan one that split right down the middle.  Led by Matt Guyette, Director of Business Programs, Keith Longtin, who directs the Lab’s government and commercial programs, and Chip Cotton, Energy Research and Development Account Executive, the GE team presented the company’s key energy transition principles to accelerate global decarbonization goals while also ensuring that future energy needs are met. 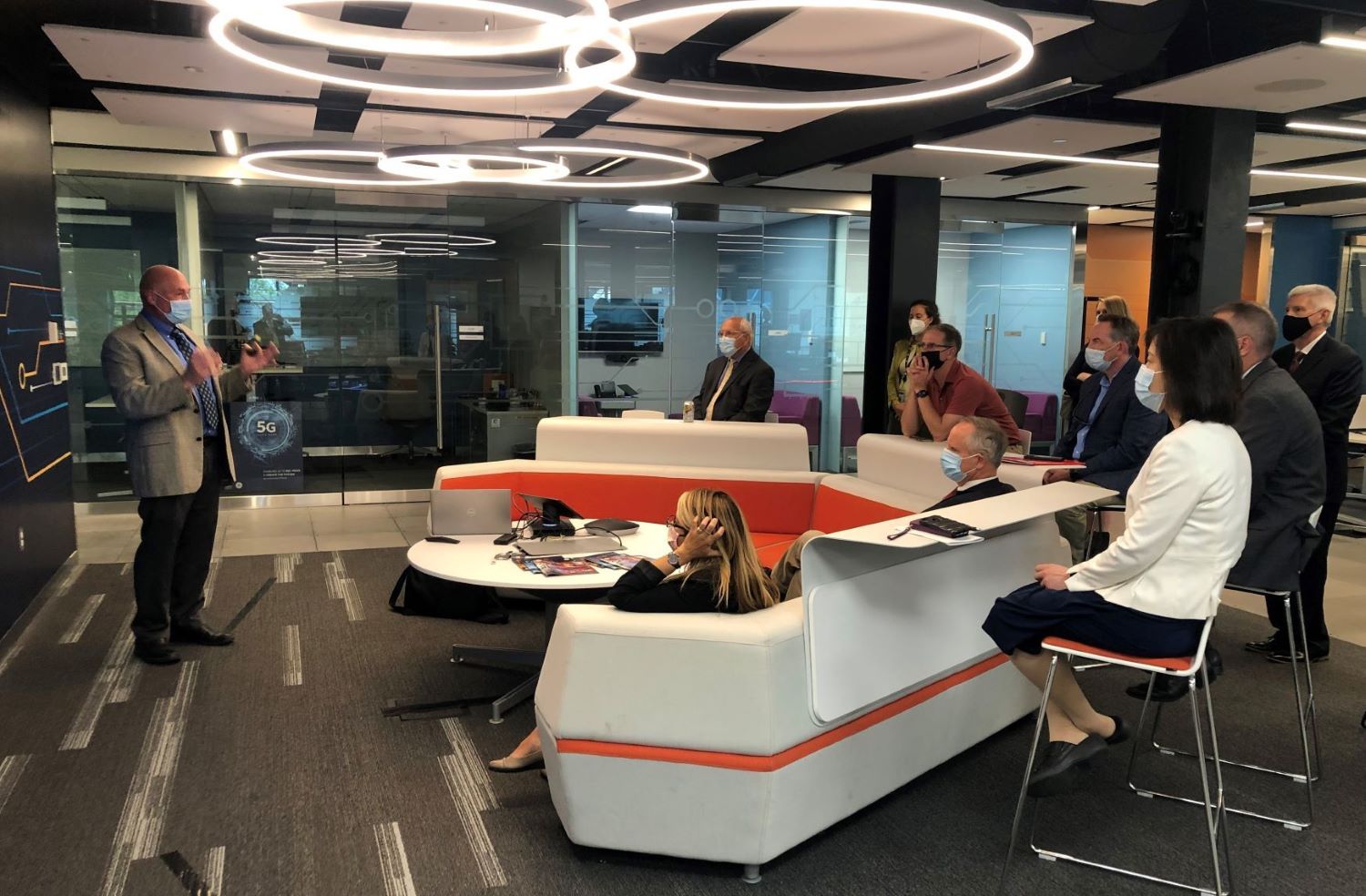 Caption: Matt Guyette, Director of Business Programs at GE Research, provides an overview of GE Research and shares GE’s views on the energy transition in the Forge Lab with Reps Tonko and McKinley, members of their staff and representatives from the Bipartisan Policy Center.

“We need to grow renewables like wind and solar as fast as possible, but we know based on current forecasts out to 2050 that we’ll need more than just wind and solar to meet our future energy needs,” Guyette said. “We believe gas has a critical role to play, along with other carbon free alternatives like nuclear too. We see multiple pathways to a zero- carbon energy future that involves a mix of renewables, gas, nuclear and other technologies.”

GE’s Gas Power business already manufactures gas turbines that are capable of running significant percentages of hydrogen and are on a path with GE Research to one day achieve 100% hydrogen combustion. GE has more than 75 gas turbines with greater than 8MM operating hours on hydrogen and similar low-BTU fuels. In parallel, GE researchers also have multiple programs in carbon capture technologies research.  During the visit, Reps Tonko and McKinley toured a lab where a GE Research team is hard at work enabling a large-scale, economical solution for carbon dioxide (CO2) capture. 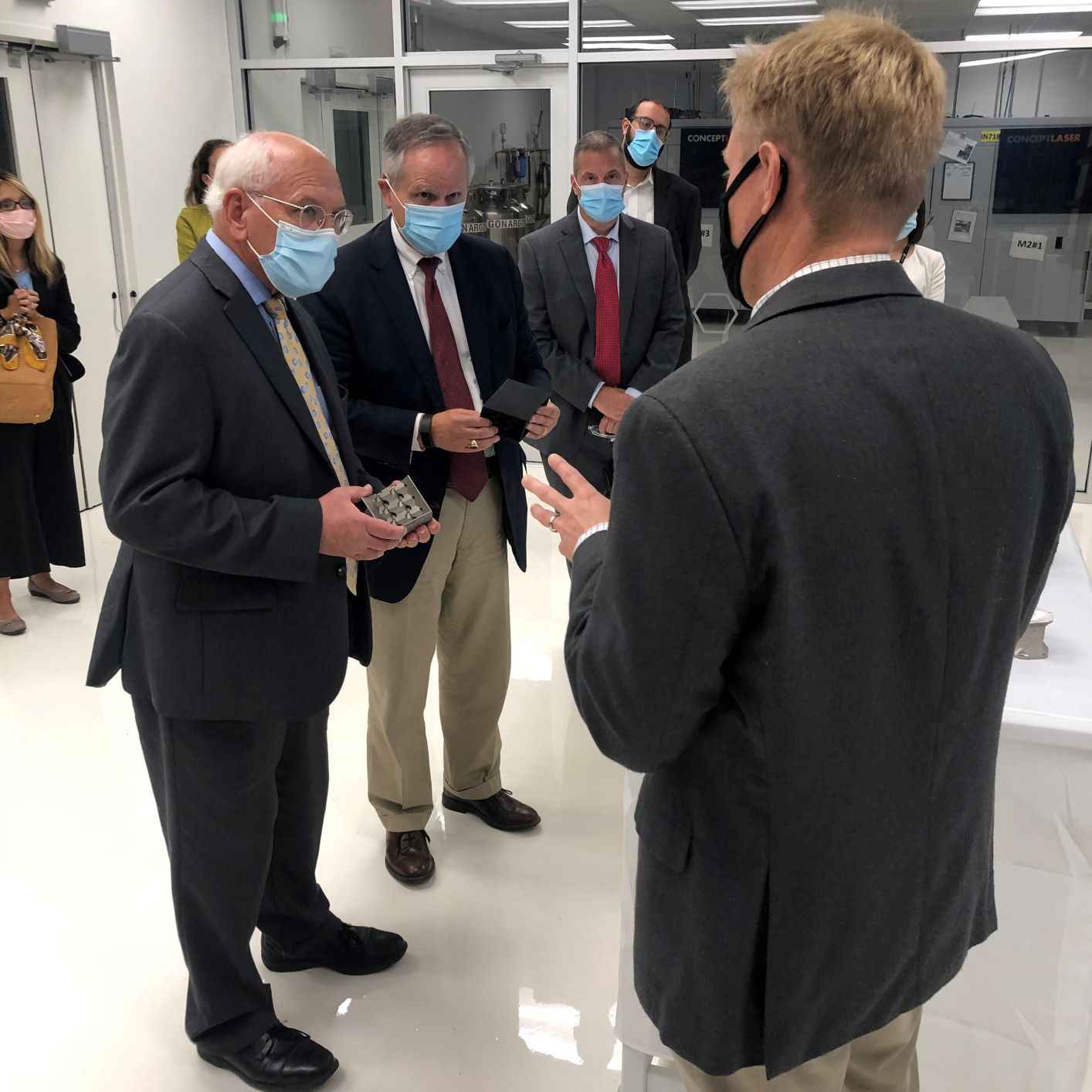 Caption: Dave Moore, Technology Manager for Material Physics and Chemistry who leads GE Research’s CO2 capture research initiatives, provides an overview of the Lab’s carbon capture technologies to Reps Tonko (at left) and McKinley (at right). Rep. Tonko is holding a 3D- designed and printed heat exchanger, which is a key component of the CO2 capture solution GE researchers are designing.

In addition to carbon capture, Reps Tonko and McKinley also toured a lab where a team of GE researchers, led by Senior Principal Engineer, Dave Torrey, are working on a $20 million project funded by the DOE to develop and demonstrate the world’s largest offshore wind turbine utilizing superconducting generator technology. The team is applying 40+ years of IP and application experience scaling superconducting magnet technology for GE’s Magnetic Resonance Imaging (MRI) business to increase wind energy output, while increasing efficiency and eliminating the use of heavy rare earth materials. 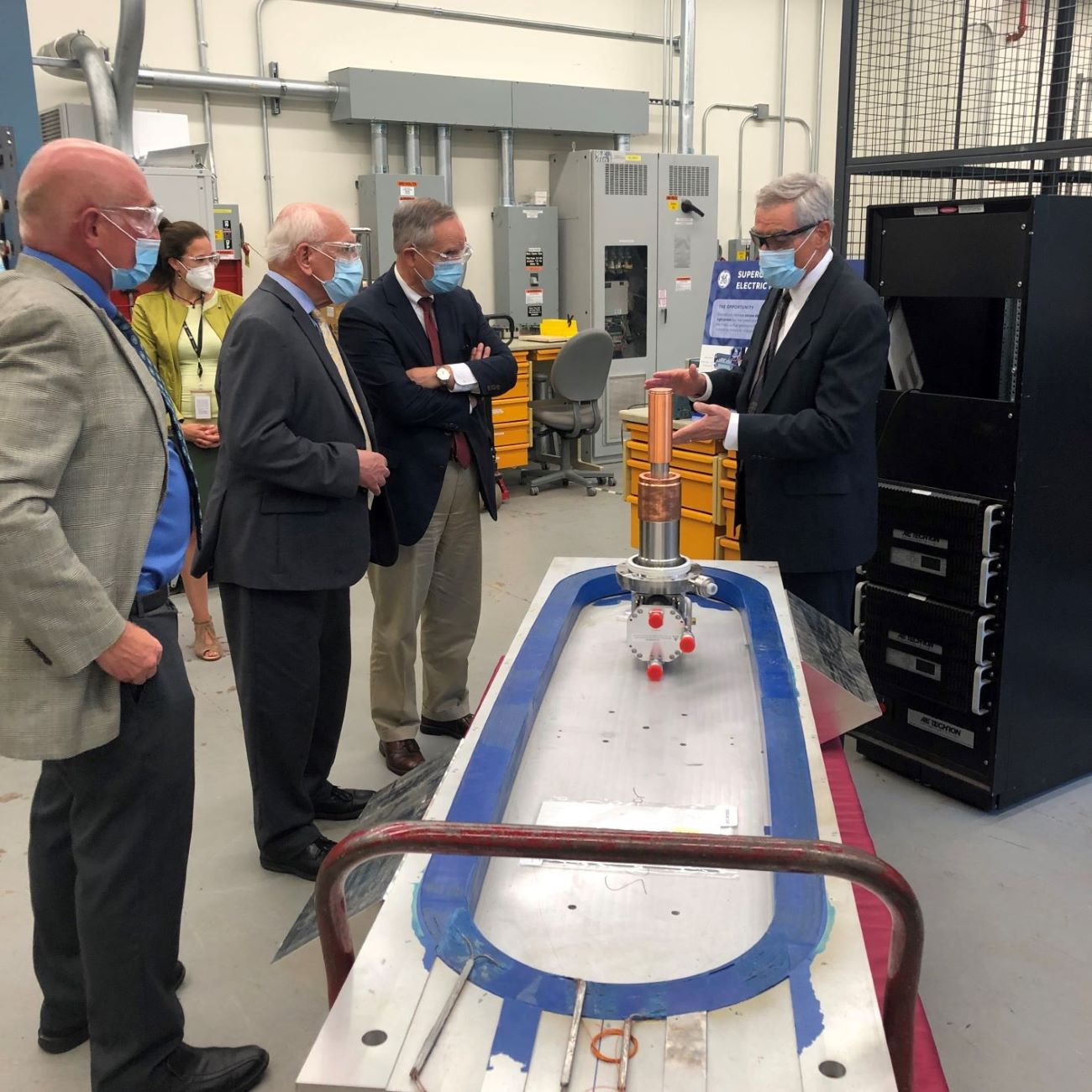 Caption: GE Research Senior Principal Engineer, Dave Torrey, discusses the Lab’s multi-year program with the DOE to develop and demonstrate a full-scale superconducting generator prototype, which will pack more power density in a smaller footprint to improve the economies of scale for offshore wind. Rep. Tonko has been a great advocate and supporter of GE’s superconducting generator initiative.

“We really appreciated the opportunity to have an open and wide-ranging dialogue on the energy transition with Representatives Tonko and McKinley,” Guyette said. “Together they bring a broad perspective across the energy landscape and are extremely knowledgeable about the issues and technologies driving the current energy discussion and debate. It also was a special treat to talk with two engineers, who truly appreciate the vast potential that engineering, and innovation have to solve our toughest energy challenges.”

“We really appreciated the opportunity to have an open and wide-ranging dialogue on the energy transition with Representatives Tonko and McKinley. Together they bring a broad perspective across the energy landscape and are extremely knowledgeable about the issues and technologies driving the current energy discussion and debate. It also was a special treat to talk with two engineers, who truly appreciate the vast potential that engineering, and innovation have to solve our toughest energy challenges.”  -- Matt Guyette, Director of Business Programs, GE Research
Share to social
Media Contacts
MEDIA RELATIONS