Most early career engineers can trace their love for math and science back to an early age. This organic interest mixed with ambition, support, and access to the right opportunities is the perfect recipe to create a career engineer. For Yohan John, innate curiosity and drive were encouraged by two parents – both accomplished medical doctors who hold education in the highest regard. His opportunity came in the form of FIRST Robotics, an extracurricular offered at Yohan’s high school in Knoxville, Tennessee. 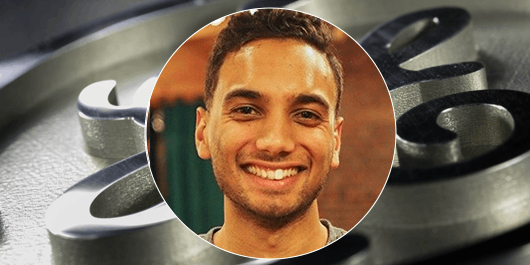 “I was interested in numerical modeling and simulation, which is taking a real-world phenomenon, understanding the physics that drive behavior, and modeling that behavior on a computer,” said Yohan.

His MIT research focused on power systems for the grid – using tools from control theory and optimization, which go hand-in-hand with modeling and simulation. Yohan describes it as developing a framework for assessing the state of a power distribution system in the presence of distributed energy resources like residential solar.

His first rotation included multiple small-scale projects with GE Research’s Electric Power team. Among them, he helped create a computer model for the Department of Energy around adoption of combined heat and power (CHP) in the United States. The model simulates certain scenarios and accounts for drivers and barriers to show when and where CHP can create the most value. Yohan also worked on simulation testing for a new wind turbine power converter for GE’s next generation wind turbine offerings. His focus was building the hardware and circuit boards to connect the prototype converter to GE Research’s wind turbine simulator.

Yohan’s second rotation was with GE Research’s Controls & Optimization team and focused on GE Aviation’s next generation helicopter engines. A complex physical application, the engine works in concert with a drive train, rotor, and numerous other OEM-manufactured components. Yohan has – and will continue in his third rotation – to assist in developing GE’s model-based control architecture for the T901 engine to ensure optimal functionality and performance.

“I am starting my third rotation and will continue to work on this project with the GE Research Controls & Optimization team,” said Yohan. “This is probably my favorite project because it’s such a cool application and it requires close partnership with the GE Aviation team in Lynn, Massachusetts. To think that this control software will be running on an Army helicopter someday is amazing.”

Outside of his technical focus, Yohan is taking advantage of networking and career building opportunities offered through the EEDP and GE’s employee resource groups. As far as career ambitions, Yohan aspires to become a subject matter expert in the field of controls and optimization.

“I have learned so much working with the people at GE Research and GE Aviation. In particular, I look up to Aditya Kumar, a senior principal engineer for GE Research, and am inspired by his ability to take a complicated problem and break it down to fundamentals.”

Yohan hopes to continue his work with the GE Research Controls & Optimizations team after the conclusion of his third EEDP rotation.