Becky Sondelski grew up around machines and hard-working people. Her family owned a recycling business in central Wisconsin and she often found herself venturing into the shop to help with equipment maintenance. For Becky, it was a curiosity for how the machines worked; taking them apart and putting them back together garnered her attention and played into her love for math and science. 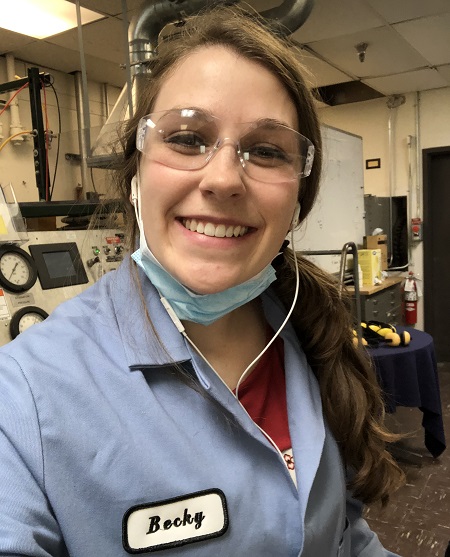 In high school, Becky pursued advanced tech classes where she discovered an interest in CAD and programming. After a bit of research and advice of friends and teachers, she enrolled in the Milwaukee School of Engineering where she pursued a bachelor’s degree in mechanical engineering. Her time at MSOE was followed by two years at The University of Wisconsin – Madison where she earned a master’s degree in the same discipline. It was here that she discovered a passion for thermal sciences and research.

Becky’s goal was to meld these fundamental engineering passions with applications in the aerospace industry. “There aren’t many companies in jet engine research, but I knew GE was and I knew they had a great program for early career engineers,” said Becky. “A research friend of mine from UW was part of the Edison Engineering Development Program (EEDP) and recommended that I check it out.”

Becky did more than check it out. She applied, was accepted, and in July 2019 she started her first rotation with the Thermal Management and Systems Technology team. The team was building and testing an auxiliary system for engine thermal management with the goal of retiring risk for various components and the system itself. Becky developed a steady state thermal model of the lab setup. The model helped inform several aspects of testing, including system changes necessary to operate at the design point, refining of the test matrix, and development of a control plan for testing.

“It was a great introduction because it is a real-life application of similar systems I had studied in my master’s thesis,” said Becky. “The experimental aspect was entirely new to me. In addition to applying theories, we’re figuring out what’s needed to fix problems, then finding ways to implement the solutions. The team was very helpful in navigating tasks such as sizing and ordering auxiliary components and managing the schedule, which were all new to me.”

In July 2020, Becky entered her second and current rotation with the Component Heat Transfer team. Her work with the team is focused on measuring local heat transfer coefficients resulting from architectural changes to the stage 1 nozzle of a gas turbine enabled through advanced additive manufacturing.

“We have run similar tests for localized heat transfer coefficients before, but because of the change in design, we had to reconfigure how the pieces were manufactured and attached to the test rig. We’re now running tests with varying geometries and layouts of internal cooling features to determine how design changes affect cooling. We will use these results to inform designs that take advantage of cooling benefits in the product,” said Becky.

Becky says she is thankful for the opportunities that the EEDP is providing and looks forward to continuing her work in aviation and gas turbine research. “It’s hard to make big step changes in this space but there’s building interest around new areas like carbon capture and hydrogen,” said Becky. “Technology is becoming greener and more sustainable. There’s lots to be done and I’m excited to be part of that change.”

“Technology is becoming greener and more sustainable. There’s lots to be done and I’m excited to be part of that change.”
Share to social
Media Contacts
MEDIA RELATIONS