Alex Duncan was just 12 years old when he participated in his first robotics challenge. The middle schooler was immediately hooked and spent the better part of the next two decades advancing his knowledge and pushing the engineering limits of his chosen field. Today, as a participant in the Edison Engineering Development Program (EEDP), Alex continues to explore his passion for robotics while also leaning into new fields and disciplines. 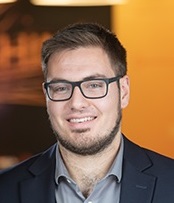 Alex is a graduate of Carnegie Mellon University and a through and through Tartan; he holds a bachelor’s and master’s degree in mechanical engineering, and a bachelor’s degree in robotics. During his studies, Alex worked with well-known robotics academic William “Red” Whittaker to develop an autonomous inspection system for detecting radioactivity in decommissioned uranium refinement pipes. The project was funded by the U.S. Department of Energy (DOE).

When Alex joined the EEDP in September 2018, his first rotation was with GE Research’s Robotics Breakout Group. Familiar with his work at CMU, GE Research Principal Roboticist Todd Danko, and Executive Leader, Robotics and Autonomous Systems John Lizzi guided Alex and embraced his expertise in the pipe crawling robotics domain. Alex was welcomed as part of the team and encouraged to collaborate.

The trio – Alex, John, and Todd – headed to Washington D.C. to hear from the program’s key stakeholders and to network with those boasting complementary technologies. For Alex, the visit is a highlight from his time on program. He was an early career engineer representing a multinational company, forging new relationships, and creating the connections needed to build a solid proposal.

In the end, Todd and John’s trust in Alex paid off. In September 2020, GE Research and two partners were awarded $5 million to create the PipeLine Underground Trenchless Overhaul (PLUTO), a long-distance, minimally invasive pipe repair system. PLUTO will provide structural rehabilitation of gas pipelines at unprecedented speed and efficiency at a lower cost than traditional open-cut excavation replacement. Read more about PLUTO and the other ARPA-e REPAIR grant winners here.

Riding the high of this news, Alex stepped into his second and final rotation with GE Research’s Controls & Optimization group. His time there is predominantly spent learning and validating models for the co-design and optimization of large floating offshore wind turbines. Funded by the DOE, the effort is helping to establish expectations for what cost competitive offshore wind looks like. The experience has been both exciting and insightful for Alex; he has gained a better understanding of the renewables market and its future direction.

Alex will roll out of the EEDP in January 2021 and is hoping to assume a full-time permanent position with the Robotics Breakout Group. His wants to rejoin work on PLUTO and re-immerse himself in the world of robotics.