When an engineer develops a medical device for the healthcare industry, that person better know a thing or two about the professionals who will use the device and the environment in which they operate. How does the device make a doctor’s/nurse’s job easier? How does it fit in with other apparatus? Are there any burden-causing intricacies?

Even with the utmost understanding, there’s still a disconnect between the product developer and its end user; an engineer is not a doctor, and a doctor is not an engineer. Unless, of course, they are.

Dr. Tzu-Jen (Felix) Kao came to GE Research 10 years ago by way of Rensselaer Polytechnic Institute (RPI). He earned his PhD in biomedical engineering from the school in 2005, a culmination of more than 15 years of education that began many miles from GE Research’s Niskayuna campus.

Felix is originally from Taiwan, and the Tatung Institute of Technology in Taipei (now called Tatung University) is where he studied computer science and engineering. Working towards his bachelor’s degree, Felix’s focus was small-scale clinical information system design. That is, a digital solution to house patient history, drug confliction info, etc.

“Computers were not popular in the healthcare setting in the early 1990s, so this project aimed to streamline delivery of information in a small clinical setting to improve efficiency and enable more informed decision making,” he said.

Felix explained that he had all the knowledge to execute from an engineer’s perspective but lacked medical knowledge, which was frustrating and made the project more difficult.

“This challenge is not unique; medical professionals and engineers have different ways of thinking, different goals, and communication between sides isn’t always great,” he said. “This gap makes execution a challenge.”

Bridging the gap became Felix’s new goal and while many engineers would have simply vowed to be more mindful, Felix’s dedication was extreme – he enrolled in Beijing Medical University (now called Peking University Health Science Center). With cardiothoracics as his focus, Felix earned his medical degree in 1998.

Less than a year later, Felix moved yet again – this time to the U.S. – to apply his newfound medical knowledge and experience to his studies at RPI. Upon earning his PhD, Felix stayed on board as a postdoctoral research assistant, exploring 3-D electrical impedance tomography (EIT) for breast cancer detection.

EIT is a non-invasive, non-ionizing, real-time, functional imaging technique that uses the electrical properties within a patient, derived from surface electrode measurements, to form a tomographic image. At RPI, Felix led algorithm development for the project, probe design, and data analysis. He also led development of a high-permittivity tissue-mimicking material for EIT phantoms, which can be used to test hardware, reconstruction algorithms, and the interpretation of data. This was a huge accomplishment; it gave Felix notoriety, international recognition, and was followed by a move to GE Research.

“I joined GE Research in early 2010 to very much continue the work we began at RPI,” said Felix. “We secured a six-year grant from the National Institutes of Health (NIH), which gave us the means to work on leveraging EIT to enable real-time lung ventilation (V), perfusion (Q), and V/Q ratio maps.”

Felix and the GE Research biomedical engineering team put in the work and created a novel, simultaneous multi-source EIT. Each of the EIT’s 32 independent channels consist of individual current source and voltage measurement circuits for driving and measuring signals operating at 10 kHz. Data is acquired at about 20 frames per second with 16-bit accuracy.

The number of current sources sets GE’s solution apart; these sources significantly increase the capability to detect small inhomogeneities compared to EITs with a single or bipolar current source approach.

“Real-time heart and lung monitoring is an unmet need in the healthcare industry. Today’s doctors must rely on CT or X-ray, both of which are invasive and provide slow data,” said Felix. “The potential for EIT is amazing. Imagine being able to monitor – in real-time – the lung function and therapy response for premature babies or being able to bring this functionality to aeromedical transport.”

In addition, with EIT implemented as a small, battery-operated portable device, its use could extend beyond civilian healthcare applications to military applications, and perhaps even to astronauts in outer space.

Felix’s experience goes beyond EIT. In 2009, prior to GE, Felix performed neuro-monitoring for more than 143 cases in the operating room at several California hospitals as a neurophysiologist to monitor the spontaneous electrical activity of the nerve system to reduce neuronal deficits during critical surgeries (neurosurgery, orthopedic, and vascular surgery). After joining GE, he leveraged this experience and collaborated with colleagues and other external researchers in exploring the therapeutic neuromodulation research. The group published this article in Nature Communications. Today, he continues exploring this technology for different diseases with Albany Medical College (AMC).

Like many at GE Research, Felix has and continues to be involved in multiple GRC projects. He’s lending his medical knowledge and experience to GE Research’s Digital Womb project, which seeks a solution to monitor premature babies’ vital signs without physical contact. 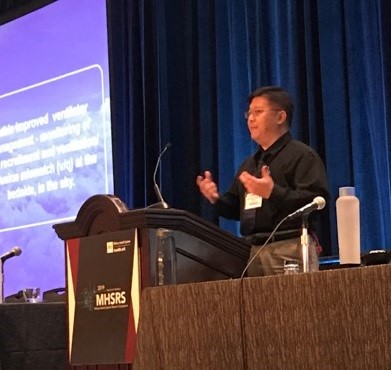 "Real-time heart and lung monitoring is an unmet need in the healthcare industry. Today’s doctors must rely on CT or X-ray, both of which are invasive and provide slow data. The potential for EIT is amazing. Imagine being able to monitor – in real-time – the lung function and therapy response for premature babies or being able to bring this functionality to aeromedical transport.” -Felix Kao
Share to social
Media Contacts
MEDIA RELATIONS