How could the world change if the government, industry and academia successfully performed collaborative research? That’s the question that Dr. Peter De Bock posed to a group of students who attended a talk that was held at the University of Maryland (UMD) on December 5th. The talk, which was hosted by students and faculty members of UMD’s chapter of the American Society of Heating, Refrigerating, and Air-Conditioning Engineers (ASHRAE), was on “How Collaborative Research on Additive Heat Exchangers Can Lead to a Greener Future.” This topic corresponds with research that De Bock and his team are currently doing for the Advanced Research Projects Agency-Energy (ARPA-E).

De Bock, Principal Engineer for the ThermoSciences organization, is leading a team that is working on the development of an additively manufactured heat exchanger that would provide cleaner, more efficient power generation. The project, titled UPHEAT (Ultra Performance Heat Exchanger enabled by Additive Technology), involves an innovative heat exchanger design and the application of a newly-developed nickel superalloy that can withstand high temperatures. The project is partially funded by a two-and-a-half-year grant from ARPA-E and is being completed in partnership with UMD and Oak Ridge National Laboratory.

ARPA-E is focused on the development of technologies and solutions that could revolutionize energy consumption in the United States. According to information released by the Lawrence Livermore National Laboratory, the US energy landscape operated at only about 32% efficiency in 2018. More efficient and higher-performing heat exchangers, like the one being developed by the UPHEAT team, could result in significant energy savings, which would help provide a cleaner, more sustainable future.

ARPA-E programs come with quarterly progress update obligations. Given the proximity of UMD to the ARPA-E headquarters in Washington, DC, an opportunity presented itself for De Bock’s team to have an in-person meeting hosted by UMD. Bill Gerstler, Principal Engineer for Thermosciences, and Dan Erno, Senior Engineer in the Mechanics & Design organization, were also in attendance. De Bock used the event to connect with UMD students on the topic of collaborations between government, industry and academic institutions. In order to reiterate the impact of this type of partnership, ARPA-E Technology to Market Advisor, Rakesh Radhakrishnan co-presented the meeting with support from Vivien Lecoustre. The presentation included a brief segment in which ARPA-E introduced themselves and their mission to the students followed by a GE presentation highlighting an example of how collaborative research might be performed. 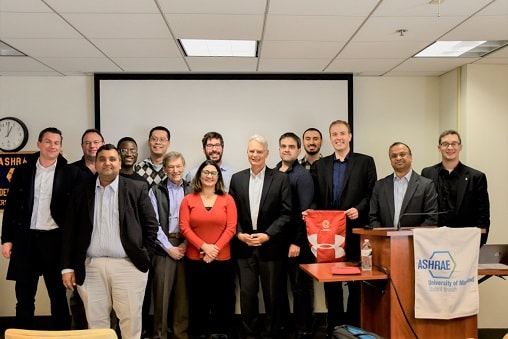 De Bock and the UPHEAT team have an interest in mentoring and working with students, especially because of the energy, excitement and new ideas that they bring to research. The event was standing-room only, and the attendees were highly engaged with the topic. GE often partners with academic institutions on research and events—in 2019, a group of 21 universities around the world participated in a GE-sponsored additive heat sink design competition. De Bock is hopeful that in the future, he can continue to find and take advantage of opportunities to interact with students. “The work we do here is significant,” says DeBock. “If I can show people the impact their work is going to have, they get excited about it. When I mentor students, I try to show how the work is relevant and how it changes lives. Who doesn’t want to work on that?”

"The work we do here is significant. If I can show people the impact their work is going to have, they get excited about it. When I mentor students, I try to show how the work is relevant and how it changes lives. Who doesn’t want to work on that?” -Dr. Peter De Bock
Share to social
Media Contacts
MEDIA RELATIONS