BRINGING THE MOST POWERFUL OFFSHORE WIND TURBINE TO THE UK

The UK is the largest global player in offshore wind, with a current installed base of nearly 8 GW—enough electricity to power 7 million homes—and another 7 GW committed or under construction.

With a commitment from the UK government to increase the country’s offshore wind energy generation to at least 30 GW by 2030, the UK is set to keep growing in offshore wind, and more than 30 additional wind farms and related projects are already in planning or development to help reach those ambitious goals.

The UK government’s long-term strategy to deliver at least one-third of the country’s electricity from offshore wind was developed as part of a Sector Deal between the offshore wind industry and the government to substantially increase the country’s affordable energy supply while reducing carbon emissions. In addition, the UK could become the first large economy to legislate “net zero” emissions target for 2050, according to the UK’s Committee on Climate Change report. GE’s newest offshore wind turbine, the Haliade-X 12MW, can contribute to that goal: One Haliade-X 12MW can reduce CO2 emissions by 42 thousand metric tons—or the equivalent of removing 9,000 passenger cars from the road annually*.

GE AND THE UK

A close collaboration for 128 years

LEARN MORE ABOUT GE IN THE UK

With offshore expertise and solutions that include the Haliade-X 12 MW—the most powerful offshore wind turbine in the world—and substations, grid connections and financing, GE is uniquely positioned to address the UK’s offshore wind energy needs, and is already active in many research, testing and supplier programs in the UK. 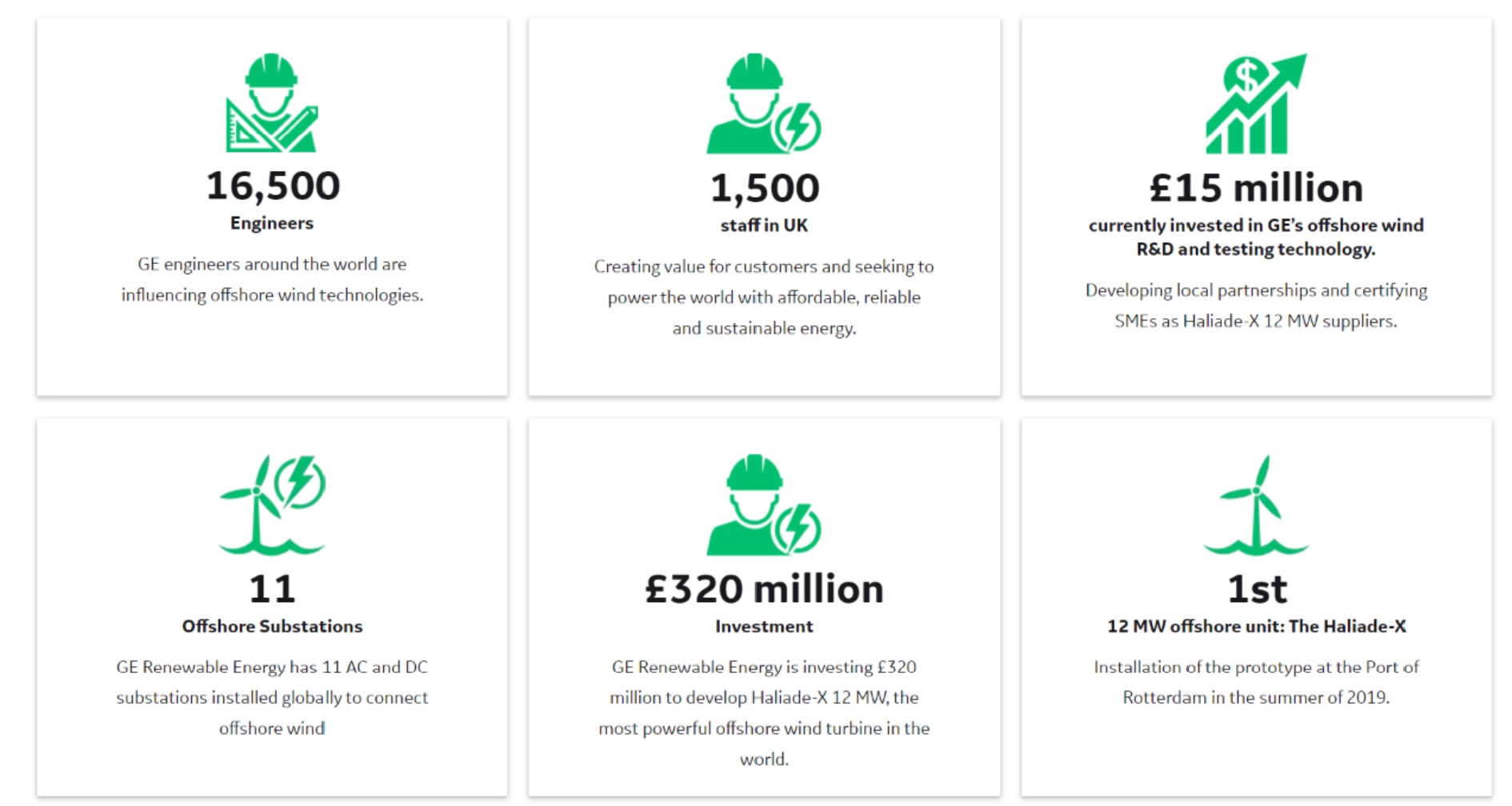 INVESTING IN THE UK OFFSHORE INDUSTRY

Innovation for the future

Today GE Renewable Energy is investing nearly £15 million—mostly in the UK—through partnerships with local players in innovation, research & development to test offshore wind turbines nacelles and blades, developing local SMEs, and certifying potential local Haliade-X 12 MW suppliers for projects in the UK and around the world.

Through a partnership with Offshore Renewable Energy (ORE) Catapult, we are testing our Haliade-X 12 MW technology through advanced test and demonstration programs. We are also working on initiatives to reduce the operating costs of offshore wind, by minimizing the time people spend at sea (“Stay Ashore!”) focused on design reliability, remote operability and robotics for planned maintenance.

Press release: Haliade-X nacelle and blade testing in the UK

GE is also helping to fund research projects to improve the operation, reliability and performance of next generation offshore wind turbines through a collaboration with the University of Sheffield, the academic partner for Catapult’s Powertrain Research Hub.

In 2018, GE Renewable Energy and ORE Catapult signed an R&D agreement to advance offshore wind technologies in the UK.

We are looking for local suppliers!

GE has been actively assessing the UK’s offshore supply chain, infrastructure and skills to develop programs that will help us continue evolving our offshore products and help strengthen the country’s global offshore competitiveness.

As members of the Offshore Wind Industry Council (OWIC), GE Renewable Energy actively supports the recently announced Offshore Wind Growth Partnership (OWPG) initiative, which aims to increase UK local content and support the growth of UK businesses looking to capitalize on the opportunities offered by the expansion of offshore wind around the world. GE will be developing local Small and Medium-sized Enterprises and qualifying them as potential suppliers for the Haliade-X 12 MW—the world’s most powerful offshore wind turbine—providing training and apprenticeship programs to leverage local employee resources for local and global projects, and developing local suppliers to work on the industry’s largest turbines.

We invite you to visit us at the event below, where you will hear about the latest developments in offshore wind technology and services from the GE Renewable Energy team. 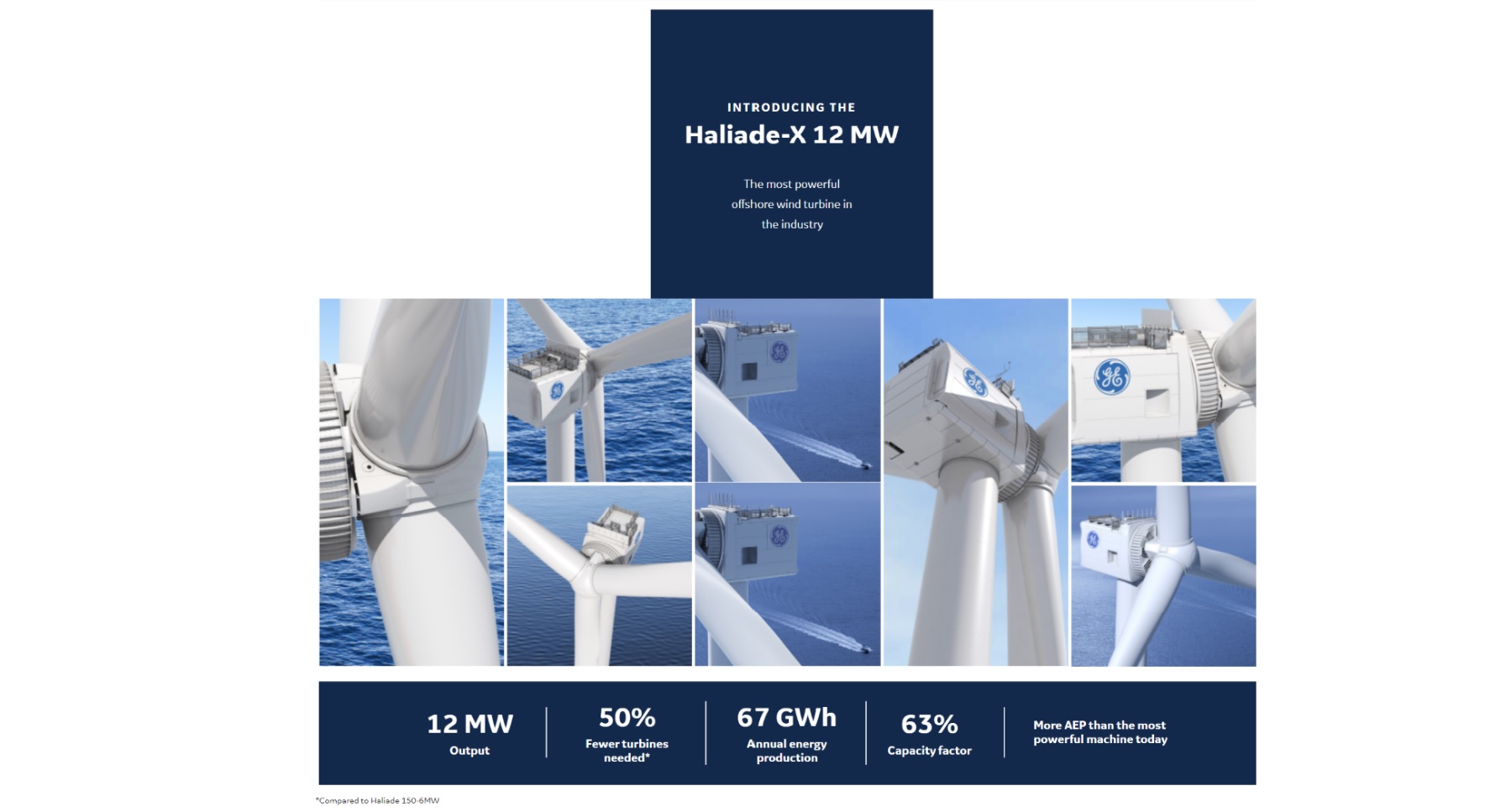 Early this year, GE Renewable Energy and Future Wind announced an agreement to install the first Haliade-X 12 MW prototype in the Netherlands, at Rotterdam Port. Onshore installation will allow for the testing, initial operations and data collection required to obtain a Type Certificate before shipping our first units in 2021. Although installation is slated for this summer, components of the Haliade-X 12 MW prototype are currently being assembled.

Want to keep up to date on our journey?
SUBSCRIBE TODAY

GE is the only offshore wind turbine manufacturer with projects in the America, Europe and Asia. 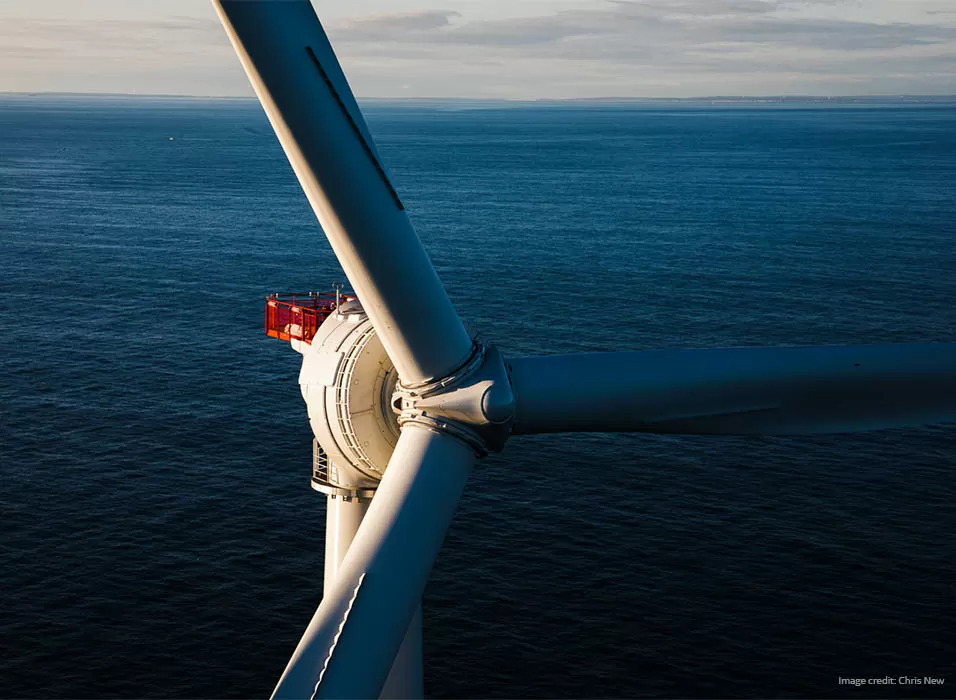 GE successfully installed and commissioned the turbines for the first offshore wind farm in the U.S., located off Block Island, just south of mainland Rhode Island. The five Haliade 150-6MW wind turbines are now providing all the energy needed for the island’s inhabitants—and saving up to 1 million gallons of diesel that were previously burned every year to generate power. 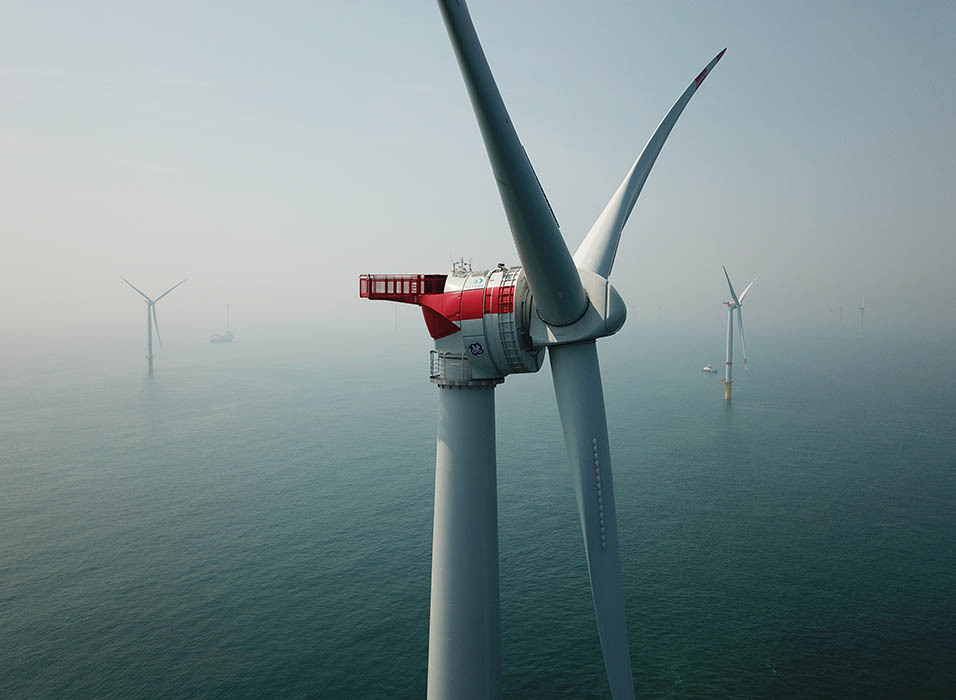 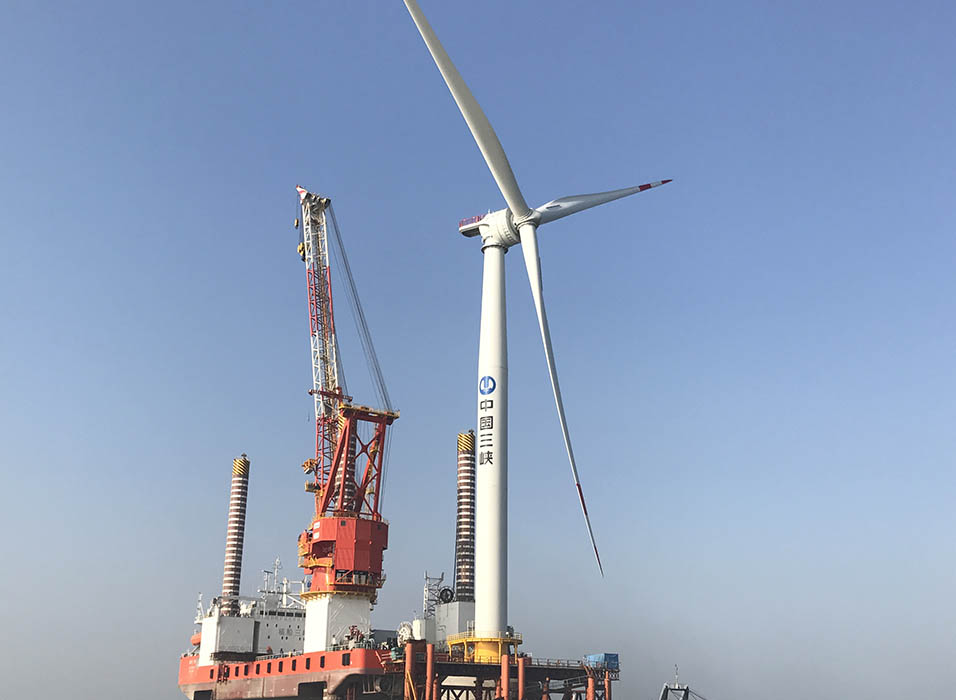