Jérôme Pécresse was appointed President of Alstom Renewable Power Sector and Executive Vice-President of Alstom, in June 2011. He created Alstom’s Renewable Power business which had close to 10,000 employees and sales of around €2 billion. He joined Alstom from Imerys, where he held several positions during his 12 years there, starting with Vice-President Strategy and Development until being appointed Chief Operating Officer of Imerys in 2008. Prior to this, he was with Crédit Suisse First Boston from 1992, firstly as associate, then Vice-President, and finally Director responsible for mergers and acquisitions for France.

Born in 1967, Jérôme Pécresse is a former student of the Ecole Polytechnique and an engineer from Ponts & Chaussées. GE is one of the world’s leading suppliers of renewable energy technology with more than 400GW’s of installed capacity in 60+ countries around the world. With manufacturing and assembly facilities in the United States, Europe, Asia and South America, the company’s current renewable product portfolio includes onshore and offshore wind turbines and hydro products and services. Anne is a 20-year GE veteran who has worked and advanced through a series of increasingly responsible assignments in the power generation, oil & gas, and renewable energy industries.

Previously, Anne spent four years as President and CEO of GE’s Onshore Wind business, which achieved record orders in 2016. Under her leadership, the business expanded globally in countries like Brazil and India, as well as growing significantly in Asia and Europe, while expanding the global services offerings with new products like repower and PowerUp.

Prior to her role in GE Renewable Energy, Anne was CEO of Flow & Process Technologies, a division of GE Oil & Gas. She has also held the role of General Manager of Power Services.

Anne was promoted to a Vice President and Company Officer of GE in March 2011. Anne holds a Ph.D. in Applied Mathematics, from Rensselaer Polytechnic Institute in Troy, NY. 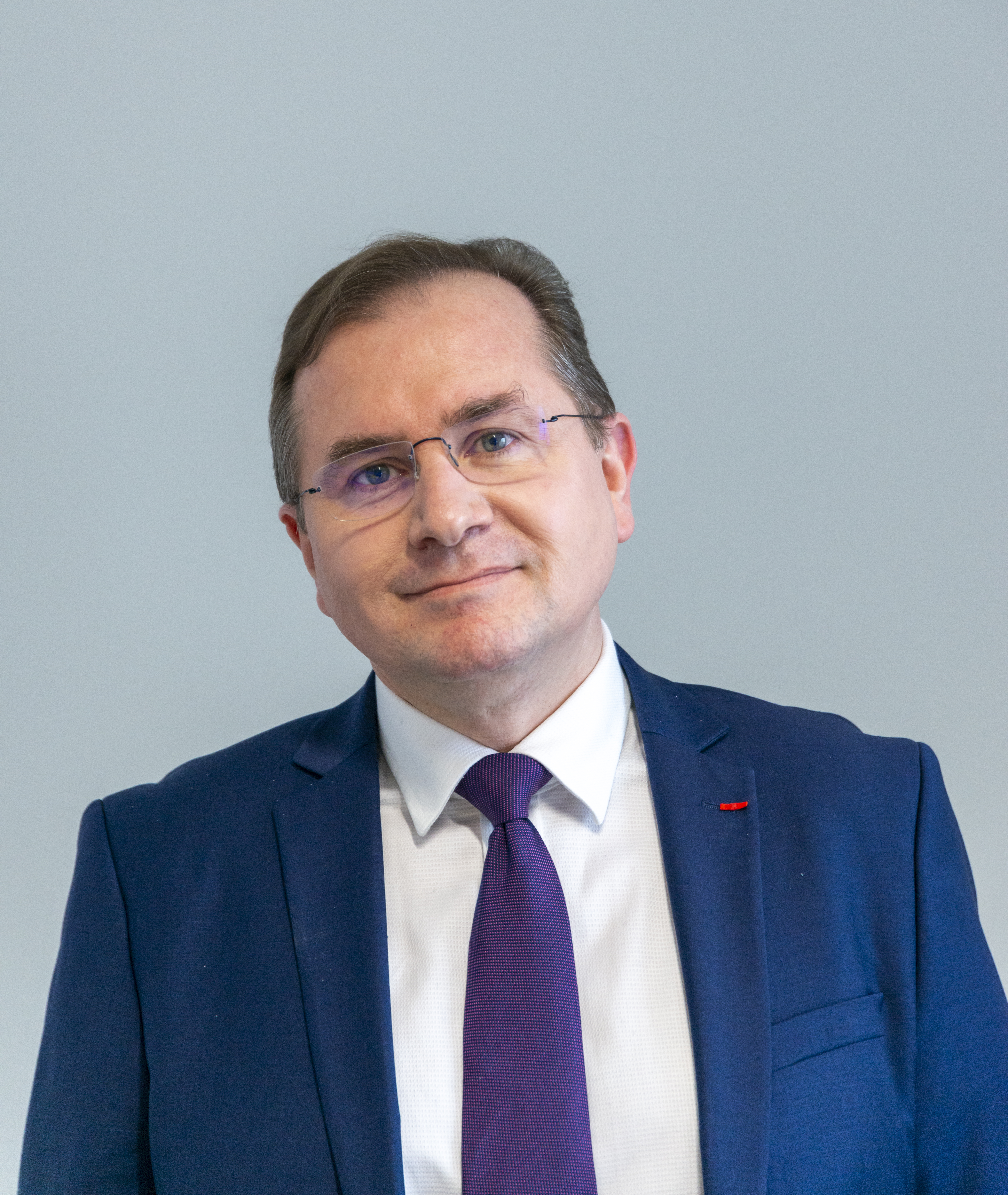 He is responsible for steering the companies' strategies and for continuing to develop the businesses across multiple energy-intensive industries, contributing to the decarbonization of their footprint and building the grids of the future, while driving commercial and operational excellence. Grid Solutions provides power utilities and industries worldwide with integrated systems, and services to bring power from distributed energy resources, reliably and efficiently from the point of generation to end power consumers. Power Conversion applies the science and systems of power conversion to help drive the electric transformation of the world’s energy infrastructure.

A graduate (PhD) of Ecole Polytechnique in France, Philippe has more than 20 years’ experience growing and transforming industrial companies with a global footprint. He has been deeply involved in the fields of energy, marine, defense, electro-intensive industries, and digitally engineered products.

Philippe is also Chairman of the Board of GE France and has been distinguished as Knight of the Legion of Honor by the French Republic Presidency.

Since October 2017, Prakash was Chief Financial Officer for GE Renewable Energy’s Hydro business. Previously, Prakash was the global CFO for the GE Boilers business, within GE Steam Power Systems. Since 2014, Prakash held a dual role as CFO for GE Power in Asia Pacific and Regional CFO for GE in South East Asia (ASEAN).

Prakash started his career with GE in India as part of the Financial Management Program and then joined the Corporate Audit Staff. His experience on these leadership programs over 6 years included financial, compliance, M&A and risk management work across Healthcare, Energy, Media, Commercial Finance, Capital Markets, Consumer Finance and the Reinsurance businesses in North America, Europe and Asia-Pacific markets. Over the following 5 years, Prakash held various roles in GE’s Financial services businesses in Asia based in Tokyo and then subsequently in Singapore where he was the CFO for GE Capital in the South East Asia region before moving to his Regional CFO role in GE ASEAN in 2011.

Prakash graduated with a Bachelor of Commerce degree from Bangalore, India. He is a member of the Institute of Chartered Accountants of India.

Pascal Radue is the President & CEO of GE’s Hydro Solutions for GE Renewable Energy, based in Paris, France.

Pascal Radue is a seasoned leader that brings a wealth of strategic thinking and an intense focus on execution. He has a passion for the energy industry in which he has developed a profound experience in project and general management.

He started his career with Alstom Power in Belfort, France, in 2001. He then held several leadership roles for Alstom and then for GE Power, in Australia, Switzerland, Thailand, and Malaysia. He has a proven track record of delivering complex projects in a global environment, as well as developing and implementing global transformation strategies that support business growth.

Pascal Radue is passionate about working in and building multinational collaborative teams, as well as establishing strong relationships with customers and stakeholders.

Pascal Radue holds a Master of Engineering (Hons) degree in Naval Architecture from Southampton University in the UK. Olivier Fontan is the President and CEO of LM Wind Power a GE Renewable Energy business. LM Wind Power is a world leading designer and supplier of rotor blades for wind turbines. Olivier is a GE Company Officer.

Prior to this new role, he was the Vice President of Global Supply Chain for GE Renewable Energy. In this position, he was looking after the entire supply chain, including Manufacturing and Sourcing, of this $10b business.

Before joining the GE Renewable Energy business, Olivier spent more than 10 years in Asia as the Vice President Asia Manufacturing and China Sourcing where he developed, grew and lead a supply chain footprint with up to 30 plants and $5b buy. Earlier he was Operations Manager for GE Power in Hungary in a green field plant, dedicated to Gas Turbines components, he participated to set up, grow and lead.

Before joining GE, Olivier worked as Manufacturing Leader in the car industry and worked for the global sourcing organization of Alstom.

He is a Master Black Belt certified.

Olivier graduated with M.S degrees in Mechanical and Manufacturing Engineering. He has built a 20-year career in the wind sector with companies like Bonus Energy, Siemens Wind Power and Bladt, Kjærsgaard joined GE in June 2021 with a goal to continue scaling up its offshore wind business. Today, GE is established as a leading offshore wind equipment supplier with its Haliade-X platform, totaling 5.7 GW of commitment backlog.

Prior to joining GE, Jan was CEO of FLSmidth’s cement business, including full EPC turnkey plants, products businesses and aftermarket services, from 2017 to 2020. From 2014 to 2017 Kjaersgaard was CEO of international steel contractor Bladt Industries and continued to gain expertise in the offshore wind sector.

He previously served as VP Global Sales of Siemens’ onshore and offshore businesses before becoming CEO of Siemens Wind Power Americas and later on CEO for Siemens Wind Power EMEA. He came to Siemens from Bonus Energy, where he led the organization’s commercial team and was involved in some of the first utility-scale offshore wind projects in European waters before the company was acquired by Siemens in 2004.

Pat Byrne brings more than three decades of deep domain expertise in technology and strategic business development to his roles at GE, leading organizations that are collaborating across businesses, and contributing toward GE’s work in the energy transition.

He is Chief Executive Officer for GE’s Onshore Wind business, which is innovating, manufacturing and servicing an installed base of more than 49,000 onshore wind turbines, and is also CEO of GE Digital, leading the company’s software business focused on digital transformation in grid operations, power generation, oil and gas, manufacturing and aviation markets. Pat also leads GE’s global Safety and Lean Transformation initiatives.

Pat joined GE from Fortive, where he served as Senior Vice President, leading their Product Realization business. Prior to Fortive, Pat was the Vice President of Strategy and Chief Technology Officer for Danaher’s test and measurement segment, where he drove strategic market development, business development and M&A. Pat also served as President of Tektronix, a leading worldwide provider of measurement solutions, and President and CEO of Intermec Technologies and Agilent’s electronic measurement group. Pat began his career at Hewlett-Packard, holding various leadership roles in R&D, technology development, marketing, quality and general management.

Throughout his career, Pat has served as a member of the board of directors for multiple publicly-traded companies, including Micron Technology, the global leader in memory solutions and recently at Verra Mobility, a leader in smart transportation technology.

Sheri currently serves as Chief Executive Officer of the GE Renewable Energy Onshore Wind International business (covering Europe, Africa, Middle East, Turkey, Asia Pacific, China, and Latin America), where she and her team partner with customers to increase wind energy penetration in some of the fastest growing markets in the world.

After a long career in automotive, Sheri joined GE in 2017 as the General Manager for Global Product Development for Onshore Wind, where she oversaw the launch of GE Renewable Energy’s industry-leading Cypress onshore wind turbine platform, as well as the launch of the best-selling 2.x-127 turbine, and first low windspeed turbine specifically designed for India and China, the 2.x-132. In 2019, she was appointed Chief Executive Officer of Onshore Wind for Asia Pacific, a region where GE currently has over 8 GWs of installed capacity with a growing backlog.

Prior to joining GE, Sheri served as Executive Chief Engineer for Autonomous Partnerships & Fleets at General Motors. During her 22-year tenure at General Motors, she held various positions including Chief Engineer for Next Generation Full-Size Trucks, the highest volume automotive platform in the world, and Executive Director for Global Supplier Quality & Development. She also led operations at GM’s Global Noise and Vibration Center and served as Chief Engineer on the Buick LaCrosse hybrid and Cadillac XTS. Sheri joined GM in 1995 as a co-op student and progressed through a number of roles within the company during her tenure.

Most recently, Sheri was recognized as 2020 Women In Renewables of the Year award recipient by Women in Renewables Asia. In 2015 and 2016, Sheri was named to the Motor Trend Top 50 Influencers in the Automotive Industry. In addition, in 2015, She was also named among the Automotive News Top 100 Women in the Auto Industry and has been recognized by Fortune Magazine, Kettering University, and the Detroit Free Press for her leadership and career achievements. Sheri is a member of the World Economic Forum Young Global Leaders and was a three-time DAVOS Panelist on Urban Mobility, The Future of Production, and Women in Tech. Before joining GE, Jason was at Dematic— part of the KiON Group, the global leader in supply chain automation and intralogistics solutions—since late 2020. Jason brings to GE a wealth of operations, execution, project management and engineering expertise across numerous industries, working both in the US and around the world.

Prior to joining Dematic, Jason spent 13 years in a variety of roles across the Linde Group, the world’s largest industrial gas company and a leader in global energy markets. He was previously Senior Vice President of Asset Delivery for Linde Gas Asia Pacific, where he was responsible for the development, execution, and commercialization of the Singapore Gasification Complex. Prior to that, he was President and CEO of Linde Engineering North America; Managing Director of Linde Engineering, Southeast Asia; and VP of Project Management and Construction for Linde Process Plants. Jason has lived and worked internationally for much of his career, having completed multiple assignments in the UK, India and Singapore.