Poland, like several of its Central European neighbors, weathered the first wave of the COVID-19 pandemic well. Until early October, the country’s hospitals were never treating more than a few thousand patients with the disease at any one time. Unfortunately, the next wave of infections hit Poland hard and that number soared well above 20,000 in mid-November, pushing the country’s healthcare system to its limits.

But Poland can count on reinforcements as it navigates the difficult winter months ahead. A 1,300-strong shipment of GE Healthcare patient monitors started arriving at hundreds of public hospitals throughout the country shortly before Christmas. The monitors use advanced software that can help to keep tabs on the most critically ill COVID-19 cases and also help alert clinicians to troubling changes in their heart rate, blood oxygen level and body temperature. Logistically, it’s been a remarkable effort: Just a few weeks ago, those monitors were nowhere in sight, explains Marcin Karp, a service director for North Eastern Europe at GE Healthcare. “It would normally take us one or two years to deliver that number of units, but we managed it in a matter of a couple of weeks,” Karp says, who is based in Warsaw. “That’s not scaling up by 50%, that’s scaling up by 50 times.”

Karp and his colleagues were able to ramp up delivery efforts with help from another GE business: GE Aviation. GE Aviation runs the Engineering Design Center (EDC) near Warsaw where highly skilled professionals work on the next-generation of aircraft engines, including the Catalyst, an advanced turboprop engine whose large sections will be 3D-printed from metal. Last fall, though, they pitched in to help with final configuration and setup of accessories with the monitors — an end step that normally occurs at the hospital.

The story began back in October. The Polish health ministry, which was rapidly working to strengthen the country’s intensive care capacity in response to rising COVID-19 infections, awarded GE Healthcare a contract for the patient monitors. “Our spring wave of COVID-19 was not so serious, but the autumn wave brought a big increase in the number of patients in intensive care,” Karp says. 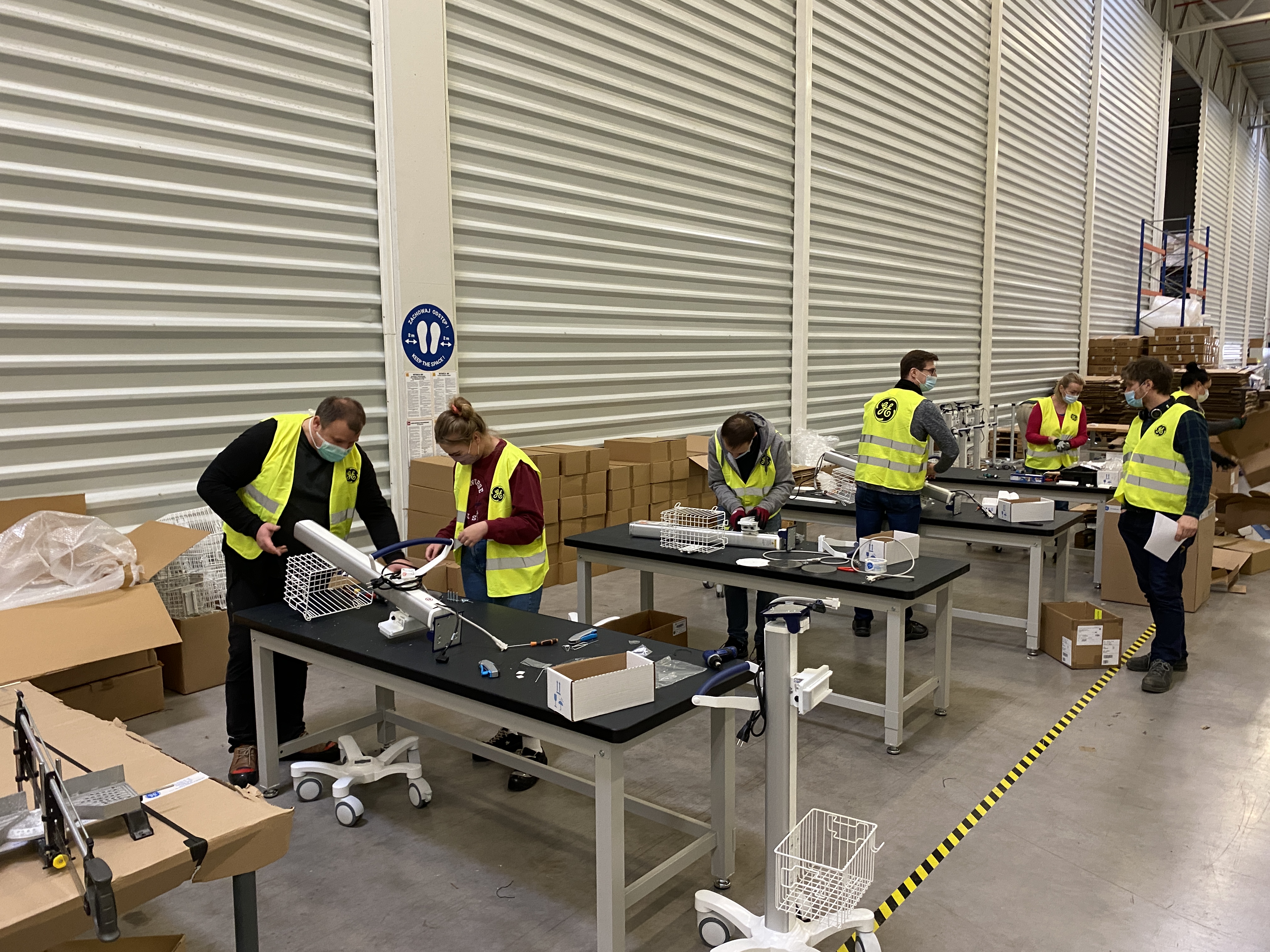 With the onset of the second wave of COVID-19 cases, the need for patient monitors became more urgent, and Karp and his GE Healthcare colleagues acted quickly. The major sticking point was not their ability to manufacture the patient monitors themselves but their capacity to complete the last step in the configuration process: The installation of the devices and their accessories onto hospital trolleys. “It’s normally an hourlong job for one person on one machine, but we had 1,300 machines,” Karp says.

Karp knew he would need help. “We thought about reaching out to the military, or university students, who both might have the technical skills required for the job,” he says. But it quickly dawned on them that the answer lay much closer to home.

Warsaw is nicknamed the city of engineers and many of the best ones work at the EDC, a hybrid company set up in 2000 by GE and the country’s prestigious Łukasiewicz Institute of Aviation. EDC can seem like a giant engineering faculty team at a major university with one major difference: Its research and development programs are not purely experimental but directly connected to the industrial world.

Around 1,300 employees work across EDC’s sprawling complex of laboratories, test rooms, classrooms and offices in south Warsaw. They handle a broad range of aviation and power challenges that can involve materials research, high-pressure testing of airfoils, as well as projects focusing on improving service for airlines and other customers. “For example, we’re looking for repeatability of process, efficiency, safety and speed of delivery,” says Michal Woelke, a senior manager at GE Aviation.

GE Healthcare outlined the patient monitor challenge to their EDC colleagues and it wasn’t long before EDC arranged for the needed reinforcements. A total of 43 EDC engineers volunteered to pitch in with the final configuration of the devices. They worked from a COVID-19 secure workshop, mounting the monitors onto the hospital trolleys before boxing the devices and components and loading them onto trucks. “It was a great example of synergy,” Woelke says. “We had engineers from different businesses coming together to share their ideas and work together to solve a problem.”

Poland is no stranger to scientific and engineering achievements. Nicolaus Copernicus, the Renaissance-era astronomer who calculated that the sun was the center of the universe, was born in Toruń, a city on the banks of the Vistula River in north-central Poland. Poland is also the native land of the first and only woman to win two Nobel Prizes, Marie Sklodowska Curie. The EDC site itself is also steeped in aviation lore. Thanks to the efforts of engineers at the facility, Poland became one of the few countries able to manufacture both aircraft and engines, as well as export airplanes, during the early 20th century when the aviation industry was taking off. 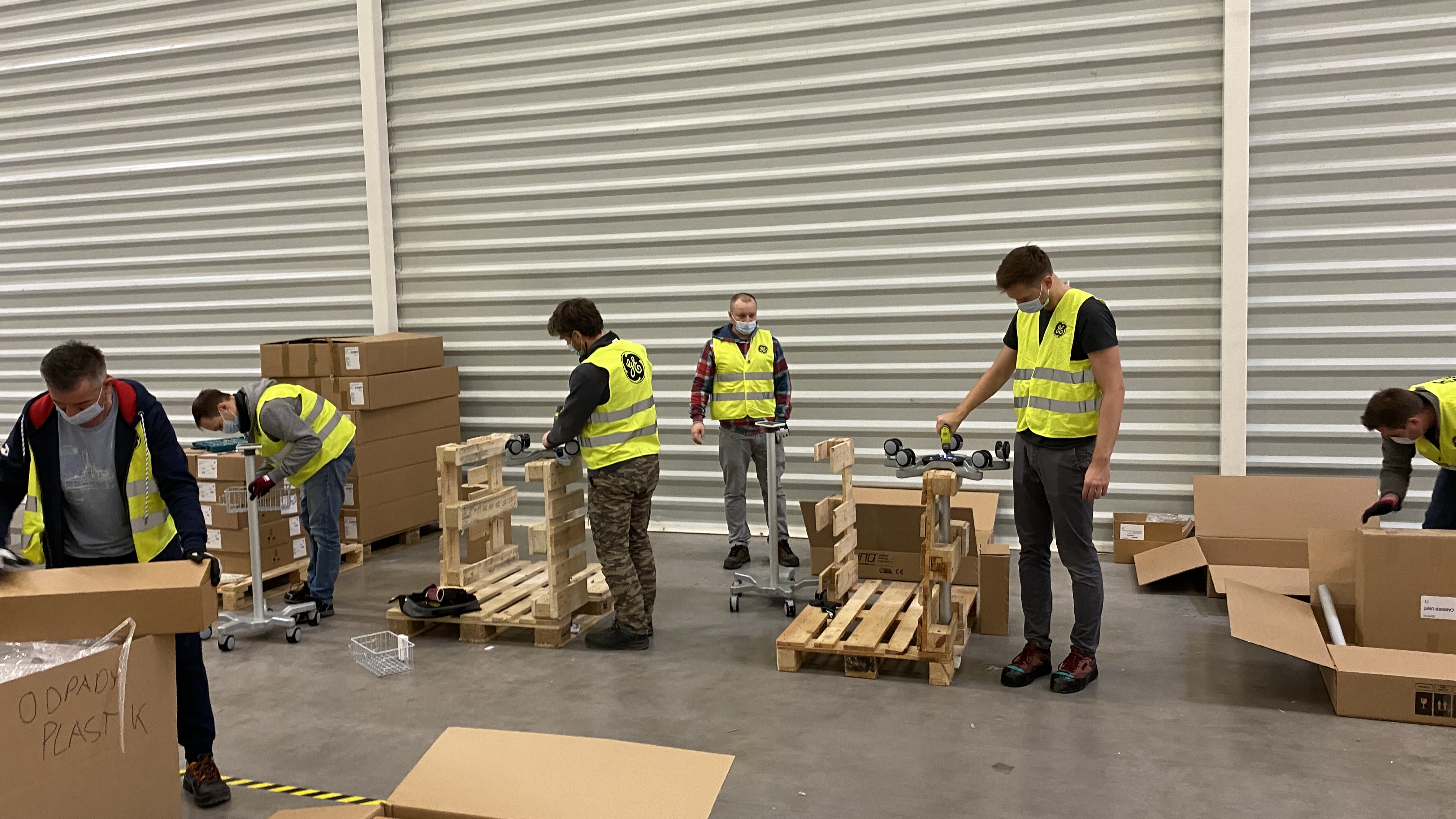 The laptop-sized patient monitors might be much smaller than aircraft engines and wings, but they will be invaluable allies in Polish hospitals in the coming months, explains Iwona Zagajewska, country manager for Life Care Solutions at GE Healthcare in Poland. “They use algorithms to measure ECG [electrocardiogram], blood pressure, body and surface temperature, oxygen hemoglobin saturation and CO2 concentration in patient’s airway,” she says. “They should be able to help notify clinicians with alarms when the patient’s condition is getting worse.”

The project wasn’t the first time GE Healthcare and GE Aviation teamed up in the fight against the pandemic. Earlier in the spring, workers at another GE Aviation facility in Cheltenham, England, worked with their colleagues to configure patient monitors and accessories for clinicians in the United Kingdom. “When COVID-19 hit us, we had to do everything differently,” said Steve Smith, regional executive manager for Life Care Solutions at GE Healthcare in the U.K. “We didn’t know how it was going to go, but, in the end, the collaboration between the two GE businesses was seamless for hospitals to be able to receive the product, unwrap it and turn it on. That has been very, very warmly received. It shows how powerful a common goal can be.”