When The Clouds Lift: How Data Can Help Airlines Recover From COVID-19 Disruptions

The coronavirus pandemic has hit the aviation industry hard. Empty airports, canceled flights and disrupted balance sheets are hurting air carriers all over the world. But the market turbulence may also point to new ways of running the business. As hard as it is, the global pandemic could become a transformative event, speeding up the adoption of data and digital systems across the industry.

GE Aviation, for example, has long played a key role in analyzing flight data. Many passenger jets are already equipped with sensors that gather data on engine use, temperature, position of the aircraft and hundreds of other variables from one millisecond to the next. Airlines use this data in any number of ways, from monitoring flights for safety issues to tracking fuel consumption across their fleets.

But that’s just the start. Airlines “have an incredibly valuable asset today that is not being fully tapped into, we think that’s about to change,” says Andrew Coleman, chief commercial officer for GE Aviation’s digital group (GEAD). “That asset is their data and it is ready for the taking to make much more insightful and effective decisions.”

Take software called EMS, for Event Measurement System, developed by Coleman’s business. It crunches the information and looks for patterns in its operations that previous techniques and approaches most likely would have been missed. ”While two planes may have the same brand and number, we have learned that no two airplanes are alike,” Coleman says. “By looking at actual performance over time, we can give customers the best thinking and advice possible.” 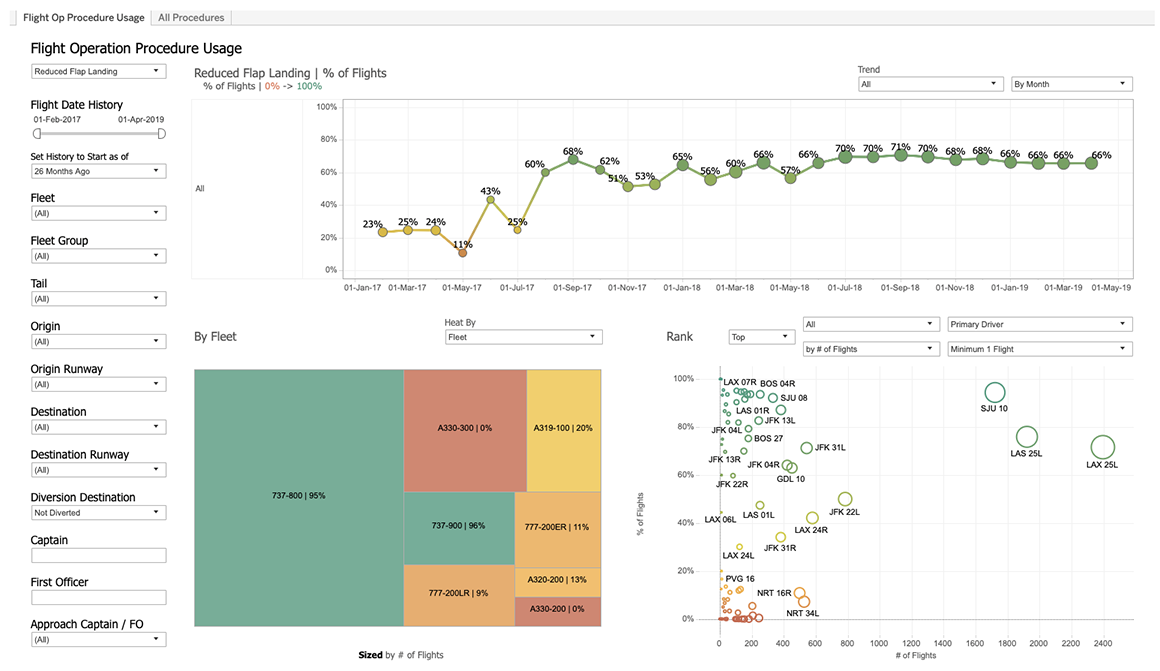 Top and above: EMS (or Event Measurement System) developed by GE Aviation's digital group crunches information and looks for patterns in airplane operations that previous techniques and approaches most likely would have been missed. ”While two planes may have the same brand and number, we have learned that no two airplanes are alike,” says Andrew Coleman, chief commercial officer for GE Aviation’s digital group (GEAD). “By looking at actual performance over time, we can give customers the best thinking and advice possible.” Top and above image credit: GE Aviation.

These insights can help carriers make smarter decisions during disruptions like the COVID-19 pandemic. Grounding planes is no trivial task, and figuring out how to do it in the most optimal way isn’t easy, Coleman says. A typical airline fleet includes planes that vary by age, size, engine configuration and even cabin items like seat layout, he says. Does it make sense to ground an older plane that’s less fuel-efficient but has an excellent service record? EMS can help answer that.

To put that data to work, GE Aviation is offering a new digital fuel dashboard at no cost to airline customers using the software, enabled by Microsoft Azure. It can help airlines make better decisions in crucial areas like saving fuel and parking planes. The insights could allow them not only to better manage through the downturn but also to take off faster when the economy starts to rebound.

Data scientists at GE Aviation have also created a new method to study trends that affect fuel consumption. The approach uses the same set of data already processed by EMS with an algorithm that combs through actual flight data to see what fuel savings procedures are being adopted and to study traffic trends by fleet and airport. Airlines can use these insights for flight planning and to identify where in their operation they have opportunities to reduce fuel costs and carbon emissions.

GE Aviation’s software can also help airlines answer tough questions as they ramp back up, which is already happening in Asia. Chinese airlines, for example, doubled the volume of domestic flights from February — when much of the country’s transport was locked down — to late March, according to Flighradar24. Normally airlines want to fill as many seats as they have available but Chinese airlines ramping back up are deliberately limiting the number of passengers on each flight to enforce social distancing measures. That creates a problem airlines haven't seen before: how to schedule flights to meet fast-changing demand but still make money with half the seats empty.

To help them, GE repurposed software that airlines normally use to recover from service disruptions — maintenance issues or bad weather that force quick decisions on rescheduling flights and crews — by tweaking the software's parameters to account for the limited number of seats, says Sean Moser, chief product officer for GE Aviation’s digital group. 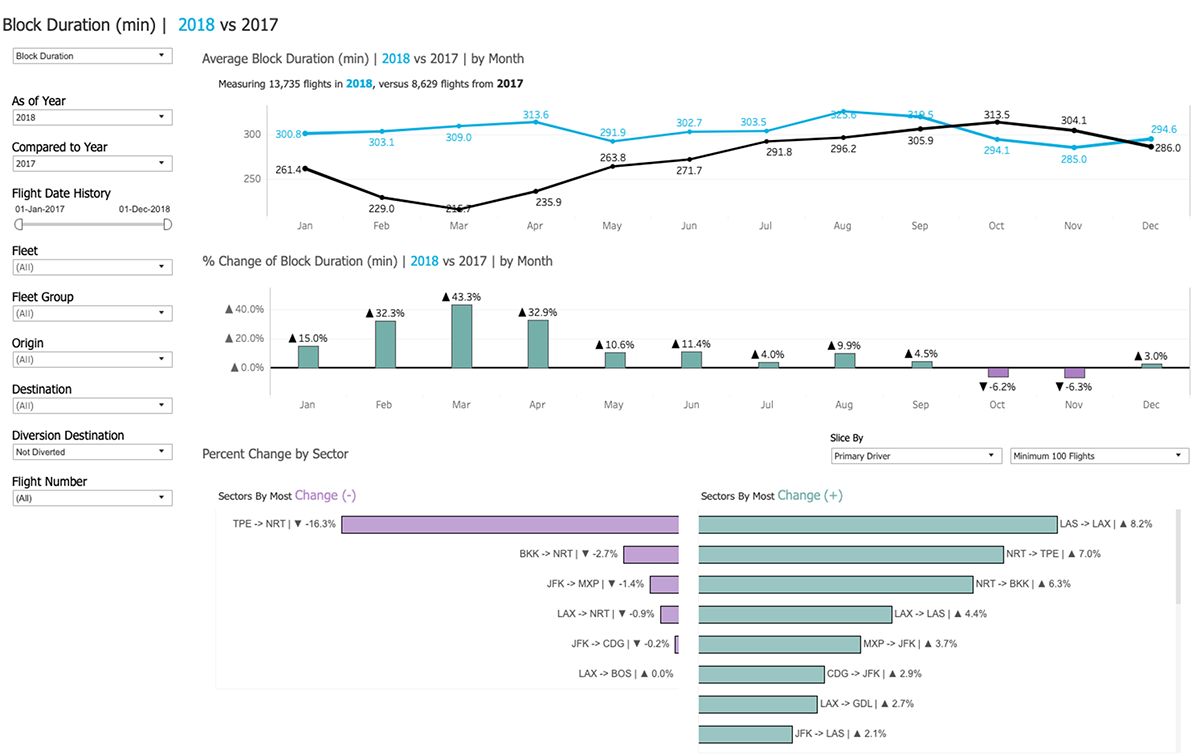 GE Aviation is offering a new digital fuel dashboard at no cost to airline customers using its EMS software, enabled by Microsoft Azure. It can help airlines make better decisions in crucial areas like saving fuel and parking planes. The insights could allow them not only to better manage through the recent downturn but also to take off faster when the economy starts to rebound. Image credit: GE Aviation.

Managing expenses while trying to get back in the air is also a big priority. Even with oil at its lowest price in nearly two decades, fuel cost for some airlines can be in the billions of dollars a year. Just a 1% savings means many millions of dollars will be saved along with the added benefit of lower emissions, Coleman says. Fuel monitoring software helps airlines shave their consumption in a number of ways, like promoting more efficient flight paths near airports.

Several years ago, Malaysian carrier AirAsia had asked pilots to taxi with only one engine running to conserve fuel, Coleman says. The software’s fuel dashboard re-enforced the value of single-engine taxi to the airline overall. Sharing this information with pilots via another GE application led to even greater adoption of this practice.

While Asian airlines are seeing restrictions loosened and passengers returning, U.S. skies still remain relatively empty. As a result, some carriers have started putting planes on the market. “Those assets are going to go somewhere else,” says John Mansfield, chief digital officer for GE Aviation.

About half of the world’s commercial aircraft are leased to airlines and their owners typically face a raft of paperwork to transfer them to a new operator, including reams of maintenance logs that sometimes need to be manually reviewed and digitized. GE’s asset transfer system software package allows lessors to digitize the process of auditing a plane’s operations and maintenance logs so it can be quickly recertified for flight faster and transfer its records, Mansfield says.

Taken together, the software solutions are tools for airlines to help them get through a difficult period, but longer-term, Mansfield sees data reshaping the fundamentals of the industry.

“Maintenance is going to be predictive,” he says. “In the future, you’ll do an oil change based on how you actually flew the plane” not based on how many miles it was flown or how long ago the last oil change was.

Says Mansfield: “There are things in the industry that are going to be fundamentally different.”