Virtual Reality Bites: 6 Ways Industry Is Harnessing The Power Of VR And AR

The future’s made of virtual insanity, warned Jay Kay, the lead singer of Jamiroquai, in a 1996 megahit. The song “Virtual Insanity” imagined a bleak world where we’d all live underground in a simulacrum of reality afforded by “useless technology.” But there’s no sign of this subterranean dystopia in 2019: Humans are still an aboveground species, and virtual and augmented reality technology (VR and AR, respectively) is seriously funky.

VR has come a long way since the 3D polygon graphics of the mid-1990s. Users now have access to headsets like Oculus Rift, where they can feel the experience of flying a plane or walking around an imaginary kingdom — without leaving their living room.

AR has also made huge strides. Among its first applications were games that allowed you to shoot monsters in your own backyard, but heavy gear such as a laptop, a headset and a GPS system were required. Now only a smartphone is needed to add bunny ears to Snapchat photos or catch Pokémon creatures on the street corner.

GE engineers are also harnessing those updated versions of VR and AR to lower costs and better understand their business interests. These technologies are helping GE and its customers train technicians, repair infrastructure and even save lives. Check out some of these applications — there’s nothing virtual about their benefits.


On any given afternoon, trainee field engineers at GE Grid Solutions work to control enormous cranes that lift high-voltage circuit breakers into place in electrical substations. But those trainees aren’t anywhere near a real power grid: They’re perfecting their skills on VR headsets from a small conference room in suburban Paris. Previously, GE’s Grid Solutions customers, such as utility, power generation and mining companies, trained for a week with physical machinery, a time and money loss for employers when it came to scheduling. But a VR practice session takes just 20 minutes and can be done anywhere, anytime — and it’s safer, too. Trainees can practice a specific maneuver until they’ve nailed it.

VR might soon allow technicians to skip that fieldwork altogether. GE Research’s robotics team has received praise for designing tiny robots that can access small or dangerous spaces where humans cannot venture. The next step is telerobotics — using VR to teleport into the robot’s working environment and control it. The robots can use lidar — a form of radar that relies on laser lights instead of radio waves — to map out the contours of their surroundings and then relay a 3D image to an operator wearing VR goggles. Using hand controllers, the techs can then manipulate the robot’s “hand” in the fields.

Walk On The Human Side

Doctors could one day don headsets to observe the glistening membrane of the lungs or the pinkish tissue of the brain. They could also “enter” a specific part of the body and scrutinize it for things like polyps, tumors and lesions, thanks to two video game enthusiasts who work at GE Healthcare’s Global Center of Excellence in Medical Imaging Software in Buc, France. Inspired by the photorealistic rendering techniques in their favorite games, the pair have created a way to walk through the human body using VR. Design tools, gaming software and detailed 3D information from CT and MRI body scans were used to build a virtual experience complete with color, texture, light and other features. The prototype, which can be used with off-the-shelf VR headsets like the Oculus Rift, could give doctors new ways to interpet medical images, as well as allowing them to prep for surgery.

He’s More Than A Dummy

Training for sonologists is lacking in developing countries, and GE Research engineers are working to fix that. Now trainees are able to scan the bodies of dummy patients while wearing special AR headsets linked to the scanners. What’s the trainee seeing? Where an average human’s organs are located and what they look like as the sonogram wand moves over the body. The headgear provides directions to specific organs, telling the trainee to move certain ways to properly capture the scan. Future plans include creating an AR program for “pregnant” dummies so problems can be spotted early in pregnancy ultrasounds.

Consider It A Great Hat Trick 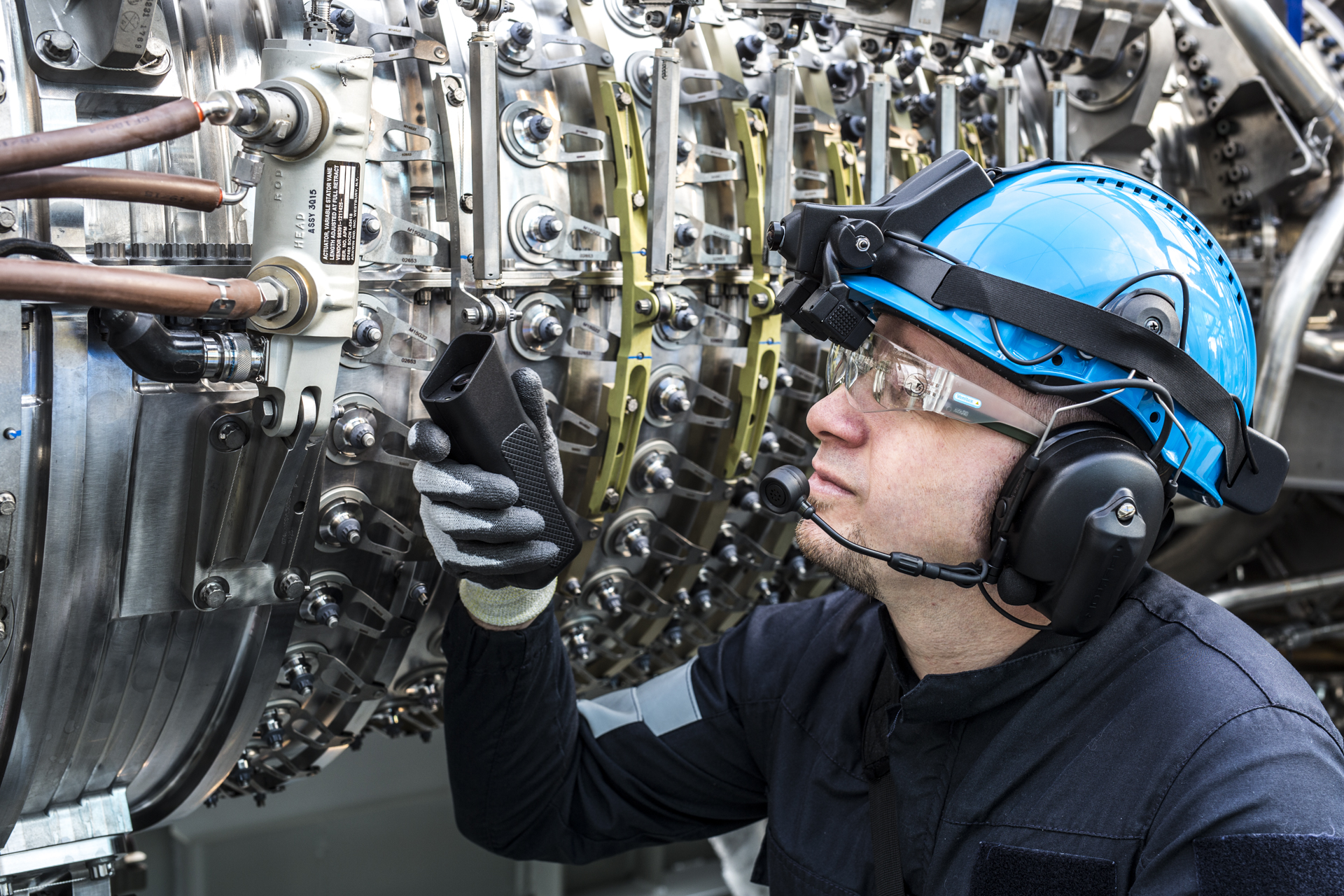 The Smart Helmet summons documents, video and drawings to the helmet’s visor with a simple voice command. Image credit: BHGE.


AR doesn’t just help to keep the heart pumping; it can also keep the oil and gas flowing. GE’s field engineers are testing smart helmets that enable them to contact colleagues sitting in offices on the other side of the world, and summon documents, procedures, video and drawings to the helmet’s visor via voice command. In the past, checking on key infrastructure in the field would typically require engineers to take several trips to gather photos and videos before making their next move. With a video camera, near-eye display and a Bluetooth-enabled headset on an industry-certified hard hat, these AR-enabled smart helmets will halve downtime from unplanned problems, says Giulia Prayer Galletti, a site activity product leader for GE Oil & Gas’ Turbomachinery Solutions, whose unit is testing 15 of the devices.

Top and above: Using Skylight, workers can access text, diagrams, checklists, images and videos that they’d otherwise have to view on a laptop, tablet, smartphone or, in many cases, paper. ”When you can digitize that information so that its available and dynamic in real-time, the opportunities for efficiency are quite meaningful,” says Upskill’s Ballard. Top and above GIF credits: Upskill.


These same principles are behind the smart glasses worn by workers assembling wind turbines at a GE Renewable Energy factory in Pensacola, Florida. These glasses — powered by Upskill, a GE Ventures-backed company — allow workers to easily pull up digitized directions and study them in their line of sight. The technicians can also access training videos or use voice commands to contact experts for immediate assistance with troubleshooting. And the expert gets to see it from the technician’s point of view through a live video connection. With wearables, productivity has only increased. “We’ve seen empirically across GE that we can make a heck of a dent in the skills gap by giving workers information on demand to do their jobs more powerfully,” said Brian Ballard, CEO and co-founder of Upskill.