This Milestone Will Blow You Away: GE Wind Platform Just Logged 20 GW of Installed Capacity Around the World

Last November, more than 8,000 GE Renewable Energy onshore wind turbines standing in 23 states in the United States and 10 different countries quietly took the power industry by storm. The 2 megawatt (MW) onshore wind platform blew through a major milestone by logging a combined 20 gigawatts (GW) of installed capacity worldwide since its debut in late 2015. That’s the equivalent of displacing 120 million tons of CO2 in five years and enough to power the equivalent of 12.9 million homes around the world.

This is a rare milestone, achieved by few platforms in the two decades since wind emerged as a powerful renewable energy source. One reason for this achievement has been incessant innovation that has allowed GE to continually evolve the turbine technology and keep them at the front of the pack. The latest turbines come with larger rotors, taller towers to capture faster, steadier winds, and digital controls for remote monitoring.

In fact, the platform recently closed another huge order as U.S. Pattern Energy announced that 377 2 MW turbines from GE Renewable Energy will power its Western Spirit Wind complex, which will consist of four separate wind farms in central New Mexico. When completed, Western Spirit Wind will be capable of delivering more than 1,050 MW — enough to supply the equivalent of 590,000 homes in the state — and help New Mexico meet ambitious energy goals. The state aims to get half its electricity from renewables by 2030, and 80% by 2040.

So why has the 2 MW platform enjoyed such longevity? For one thing, it offers 98% global availability, meaning the time its turbines are able to operate reliably for customers when they need them to. What’s more, the 2 MW platform is better than other platforms at capturing electrical output from the moving air. A team of third-party independent engineers has evaluated the 2 MW over the last five years, measuring its performance against the theoretical wind power curve, which indicates how large electrical power output will be at different wind speeds. “We beat our power curve and operate at over 100%,” says Kellan Dickens, who manages the platform’s product line. That means the turbines can generate more power than expected whether conditions are breezy or blustery. 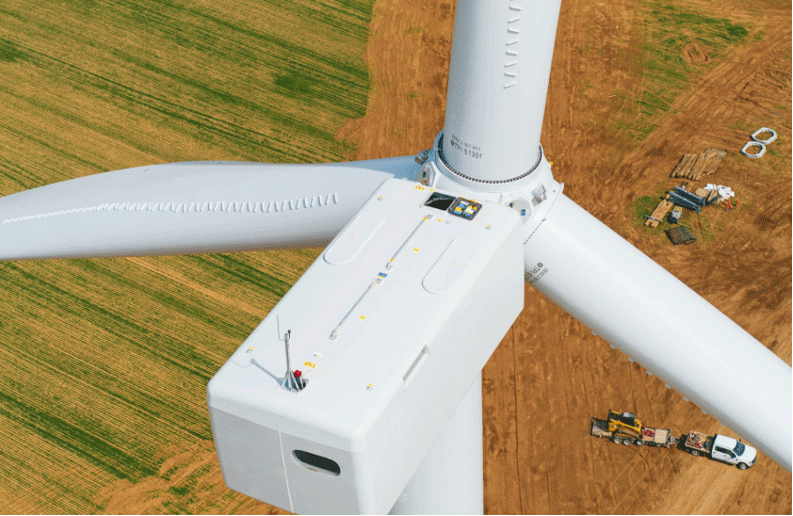 The team behind the 2 MW platform has continued to search for improvements. For instance, when it lengthened the turbines’ rotor from 116 to 127 meters to capture more wind, the team developed technology to increase the removal of excess material. “Our focus was on how we could provide the most value to our customers,” explains Dickens. “In markets like the U.S., this comes mostly through the rotor — and through technology improvements in both blade design, loads and controls, we’ve been able to build the longer rotors for approximately the same cost as the smaller ones.” Those savings particularly resonate in megawatt-constrained markets, meaning areas where onshore wind farms often require multiple, smaller turbines spread out across acres of open fields in places like Texas, Iowa or New Mexico.

The team made other improvements over the years, such as increasing the height of towers to reach faster wind speeds at higher altitudes and implementing digital monitoring and controls to maximize minute-to-minute production. And critical to the success of the platform, the GE sales, services and EFS teams worked to build deep relationships with customers on projects from conception through operation. Considering the customer focus and innovations GE Renewable Energy has put into the turbine, it is no wonder the 2 MW platform has grown its market share in the U.S. market by over 10 points in the last four years, according to the American Wind Energy Association.

A lot of people took great pains to get this platform right. Even before it launched, the design team tested the 2 MW platform with not just one but two prototypes at GE Renewable Energy’s test site outside of Lubbock, Texas. It also invested heavily in a series of independent tests on such major components as the pitch bearing, gearboxes and the blade. All of which lends itself to Dickens’ contention that the 2 MW is not just a product of innovation or inspiration, but one of hard labor.

“Thousands of our dedicated employees, from engineers to sales to field techs, have contributed their expertise to this platform,” he says. “The innovation here isn’t overly complex or grabbing all the headlines. We simply brought in technology where it made sense and focused on quality and execution with an underlying lean approach. Along the way, we’ve continued to listen to our customers, and in turn, have grown strong relationships with them. The fruit from all of this has been one of the most successful turbine platforms in our history.”