Here’s the skinny on conventional water-cooled nuclear reactors: they produce hundreds of megawatts of carbon-free power, but when they are done digesting their nuclear fuel, more than 95 percent of the available energy still remains locked inside. “If that happened to us with regular food, we would never be able to stop eating,” says Jonathan Allen, spokesman for GE Hitachi Nuclear Energy.

But nuclear engineers working for Allen’s business have turned the equation on its head. Led by Eric Loewen, whom Esquire magazine described as “the man who could end global warming,” they’ve developed a new reactor that can produce 99 times more power per unit of uranium fuel compared to conventional nuclear power plants. “It’s like cars,” Loewen told Business Green. “Do you want to drive around in an old Ford [or] Buick that gets 10 miles to the gallon, or do you want to get in a hybrid that goes 40 miles per gallon?” 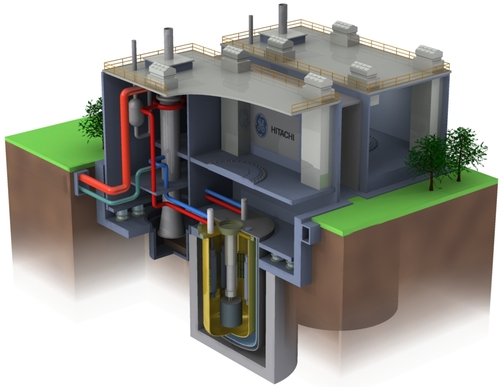 Top image: A pellet of plutonium PU-238. Scientists have used this isotope for powering thermoelectric generators on space probes, navigation beacons and other devices. Fast nuclear reactors like PRISM use PU-239, PU-240 and other isotopes. Image credit: NASA

Loewen’s reactor is called PRISM (above), short for Power Reactor Innovative Small Module. It eats used nuclear material like plutonium and other artificially made “transuranic” elements like americium and neptunium, and converts them into electrical energy. The technology was just named among several advanced nuclear projects that will receive $13 million in new funding from the Energy Department as part of President Obama’s Climate Action Plan. GE Hitachi will use the money to update statistical safety modeling of the reactor to assess the probability of external, design and operational risks.

The efficiency of the PRISM’s stomach combined with GE Hitachi’s Advanced Recycling Center has another benefit: the waste that comes out has a half life of just 300 years, as opposed to 300,000 years for nuclear fuel currently used. “Can humans make a structure that can last 300,000 years?” Loewen told Business Green. “No. For 300 years? Sure, you can see them outside.”

PRISM is a so-called “fast reactor.” It uses liquid sodium, rather than water, to cool the reactor. The sodium allows the neutrons to maintain higher energies and cause fission in elements such as plutonium more efficiently than water-cooled reactors.

The PRISM design also incorporates “passive safety,“ a design feature using the laws of physics, instead of human, electronic or mechanical intervention, to reduce the risk of an accident. PRISM relies on natural air circulation for cooling – hot air rising and cold air coming down – and does not need automatic systems, valves or operators to remove reactor heat after a shutdown with a complete loss electrical power.

PRISM is also relatively small. It can be built in modules in a factory, lowering the costs and adding another level of component control.

A few years ago, GE Hitachi proposed to the U.K. government to use a PRISM for managing the world’s largest civilian stockpile of plutonium and converting it into electricity and more benign waste. Soon, the U.K. will have 140 metric tons of plutonium. The government accumulated  it mostly in the 1970s and 80s when countries worried that they may run out of nuclear fuel.

The plutonium is stockpiled in the coastal town of Sellafield in northern England. GE Hitachi said that the PRISM reactor could use practically all of the plutonium stored at the site, produce low-carbon electricity, turning it from liability into an asset.