The Heat Is On: How The Kaizen Approach Is Helping GE Gas Power With Carbon Emissions And Energy Costs

Dan Morey had a problem. He knew the vast compressed air system in Building 273 was leaking air, but he didn’t know where.

This was no small matter. At 1.1 million square feet, Building 273 is the largest structure on the campus of GE Gas Power’s headquarters in Schenectady, New York. It’s where GE builds and services the massive steam turbines and generators that get shipped to power plants around the world. The compressed air powers pneumatic motors and other machines that help keep numerous assembly lines and parts shops running in 10 different bays. But searching for an air leak in all of that space is akin to looking for a new star in the night sky.

Yet Morey had a powerful tool at his disposal: kaizen. Kaizen is a Japanese term at the heart of lean management that translates as “continuous improvement.” Lean is the management philosophy, popularized in Japan by Toyota, that is powering GE’s turnaround. “I know of no other way to run a business than through lean principles,” Larry Culp, GE chairman and CEO, has said. “[It’s] more than a set of tools, it’s a way of life.”

A typical kaizen journey starts with a gemba walk. Gemba is another Japanese word, meaning “the real place.” The gemba walk allows employees to see how work is really done and where it can be improved. “If you’re looking for end usage leaks, you’ve got to walk it,” says Morey, the electrical and mechanical operations leader at the plant. “With an air leak, you don’t hear it until you get within two feet of it.”

Morey had an early lead thanks to Mike McGowan, the site mechanical engineer. McGowan reviewed data trends and located abnormally high air use in the southwest quadrant of the building. Something was purging 100 cubic feet per minute of air about once every half hour. After searching for four hours, Morey and his colleagues homed in on the culprit: A powerful air dryer removing moisture from a dessicant used to keep generator parts dry was malfunctioning.

By purging air at an abnormally high rate, it was causing an enormous waste of compressed air over time, as well as a significant waste of electricity. Morey’s team examined and immediately adjusted the regeneration cycle, reducing the usage, and consulted experts to replace controls and reprogram the unit. The team expects the repairs to the air dryer will lower the building’s energy usage by almost 230 megawatt-hours (MWh) over the course of a year, a savings of nearly $15,000. The Schenectady Facilities Operations (SFO) team also intends to install meters to monitor the air system and find leaks quickly. “Air leaks mean dollar signs to me now,” Morey says. 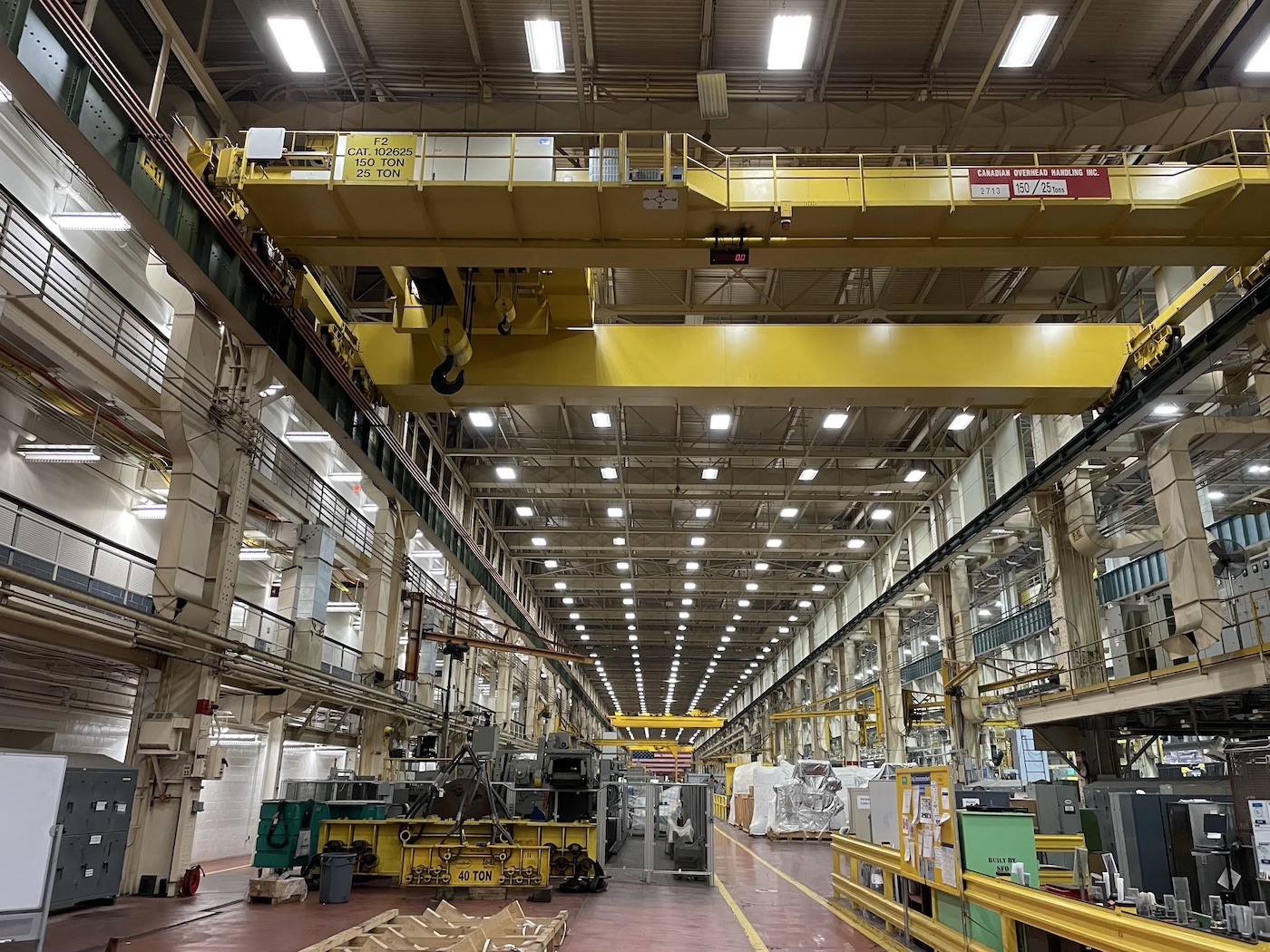 Finding the leaky dryer was just one result of a kaizen event the plant held from February 28 to March 4 to find waste that added to the factory’s energy bill. Employees from five different GE Power teams got together in Schenectady to find practical ways to cut energy costs and help with carbon emissions.

The exercise was part of a global kaizen that took place at GE Power factories around the world. GE’s pledge to achieve carbon neutrality in its own operations by 2030, including Scope 1 and Scope 2 emissions, along with rising energy costs and natural gas supply issues in Europe, gave the work extra urgency. “The goal is to get on the shop floor and make changes that we’ll feel the effect of this week, right after the kaizen event,” said Cameron Muhlenkamp, executive lean leader for GE Power’s manufacturing operations. Muhlenkamp says the business unit expects to spend millions more on energy this year in its global supply chain facilities than last year, primarily due to increases in natural gas and crude oil prices.

The idea for a kaizen focused on energy savings originated in a series of lean kaizen events that took place in late 2020 at Jebel Ali, GE Power’s service center in Dubai, United Arab Emirates. Muhlenkamp says the shop was the first to apply GE’s overarching goal of achieving carbon neutrality in its own operations by 2030 to utility costs. Ultimately, the team at Jebel Ali found ways to reduce annual energy consumption by 11%.

And that’s when a light bulb switched on. “The leadership team asked me, ‘Hey, can you do what you did in Jebel Ali globally?’” Muhlenkamp says.

He and his team got to work. They were aided by the fact that many of GE Power’s manufacturing plants had embarked on their own quests to save energy (what they call “energy treasure hunts”) in recent years, and the division had recently worked with an external company called Engie to find new ways to help with carbon emissions.

Muhlenkamp saw that by combining the lean kaizen approach and methods used by the team at Jebel Ali, he could launch a massive global energy treasure hunt: a weeklong kaizen staged simultaneously at 21 facilities around the world. He described the kaizen as “an event to take actions instead of making plans.” Ultimately, each site was looking for ways to help reduce consumption by 3% to 5% — a savings that translates to millions of kilowatt-hours (kWh) of energy, thousands of metric tons of CO2 and a boost for the bottom line. 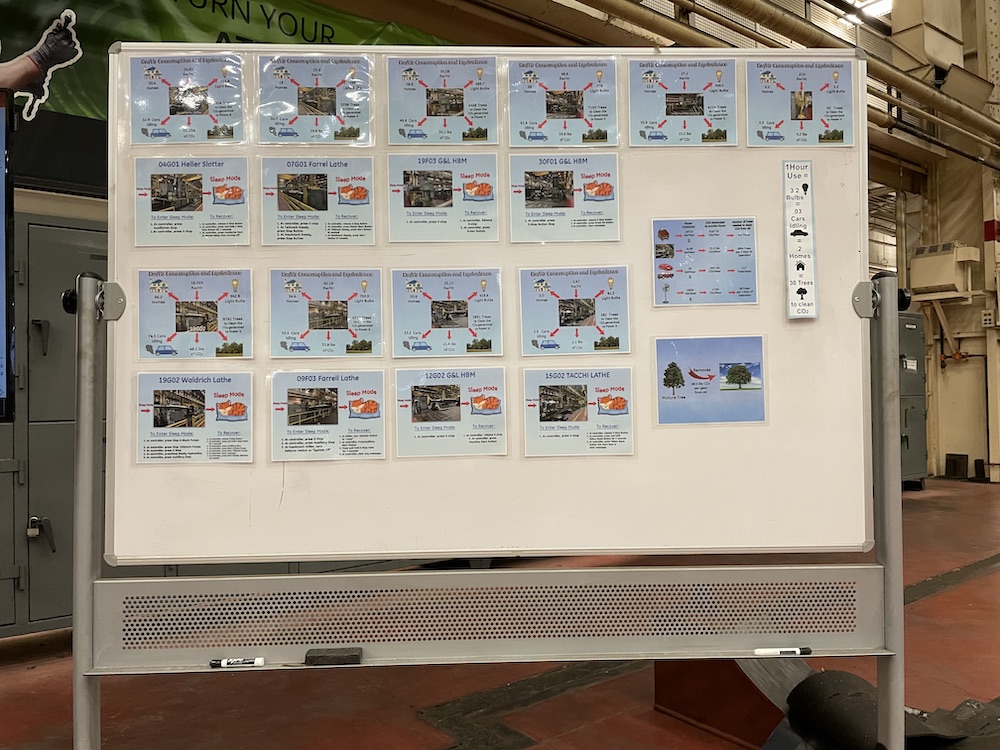 For the team in Schenectady, searching for energy savings was not new. Between 2015 and 2021, the site had achieved a 15% reduction in kilowatt-hours and a 50% reduction in fuel use. Nevertheless, the campus, which sprawls over 640 acres, uses 150,000 MWh a year, at an annual cost of millions of dollars. To find more places to trim energy, the SFO group would have to look harder for areas where equipment could be adjusted, replaced or simply turned off. “You run out of low-hanging fruit pretty fast,” Morey notes. “But that’s OK. You just climb higher up the tree.”

As the utilities operations leader and designated “Energy Champion” for the site, Dana Lovelace was confident the SFO group could make enough adjustments to lower its annual usage by 3%. But her objective was to find more than that. About six weeks before the kaizen took place, Lovelace gathered the SFO managers in a conference room to brainstorm a list of ideas, with the goal of forming four teams to pursue a two-pronged approach — half of the teams would focus on equipment and procedural changes that could be executed with immediate impact, while the other half would focus on behavioral changes and messaging. Lovelace worked to pair team leaders with complementary skill sets, matching technical expertise with project execution, and met with teams weekly to examine data and solutions while providing cross-functional support and maintaining scope.

A group designated Team 1, led by Morey and Mike McGowan, turned their attention to steam generation and compressed air, two energy sources that get piped all over the site. In addition to hunting down that compressed air leak in Building 273, the team made a variety of adjustments — some simple, others complex — that, all told, are expected to save the site more than 5,800 MWh and over $145,000, for an annual energy cost reduction of 3.77%.

For instance, in Building 265, where three boilers supply heat to the entire campus, they replaced the main air compressor. They also measured the efficiency of an existing energy saver: a condensing heat exchanger used during the winter months to preheat boiler feedwater and reduce gas consumption at the boiler. The heat exchanger procedures were changed to run year-round to further reduce energy; even in the summer, the temperature differential provided by the exchanger was enough to save an estimated 1,500 MWh a year. In Building 273, after conducting ultrasonic testing in the autoclave complex, they repaired the steam trap system, which removes water from the steam that is converted to heat. For the entire campus, they planned to turn down the heat 4.5 days earlier each year in April, which alone should save 399 MWh.

And like homeowners everywhere, they replaced 330 fluorescent lamps in one of the bays in Building 273 with LEDs. “We really do recover a lot of our energy in our steam and gas systems,” Lovelace says, “so to add that kind of savings on, I was surprised we found as much as we did.”

Another team, Team 2, focused on cooling and heating issues. Vince Vartulli, the facilities office and projects operations leader, described its efforts as the art of “chipping away,” because Schenectady’s previous energy-saving workouts had been so successful.

One of the biggest savings came from a simple question: Was there a need to run all five boilers in the summer in Building 40, which had recently been renovated with a new HVAC system? It turns out there wasn’t. Vartulli and his team decided to shut the boilers off from May to October, which is projected to save 5,795 MWh and more than $100,000. Combined with other changes in the works — such as programming the valve that regulates the flow of water they pull from the Mohawk River to cool the campus so that the water temperature is modulated automatically — they expect to shave off another 3.92% in energy costs. 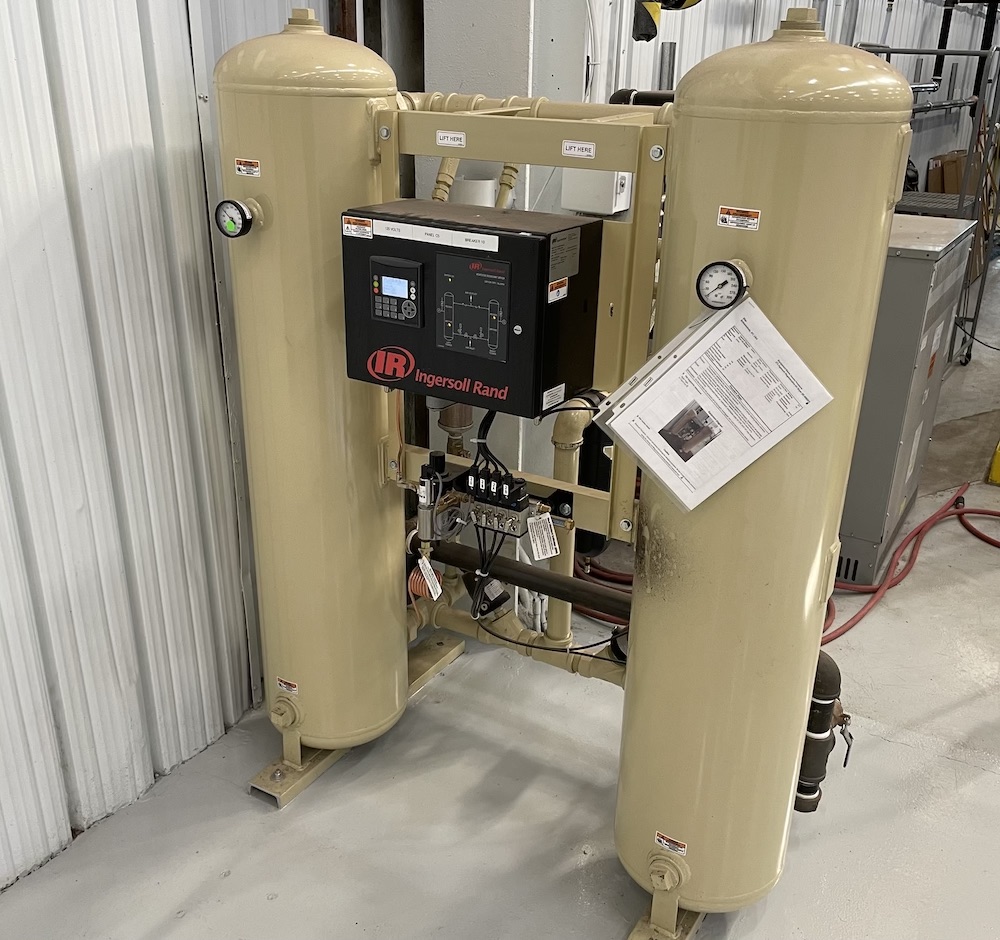 Both Team 3 and Team 4 focused on changing long-held behaviors. Chris Franchi, leader of the SFO’s center of excellence, and his colleagues on Team 3 plan to investigate how more consistent and targeted metering of power and equipment usage could help manage demand more efficiently going forward. Nick Willard and Mike Benson, co-leaders of Team 4, created visual impact statements to emphasize how shutting down idle machines could yield a big environmental gain. They focused on equipment in Building 273 that carries a “high idle load” when turned on but not in use — chilling units, hydraulic power supplies, critical path machines, even 481 standing fans, which in the aggregate equal one very large machine. (“I went through and counted every one of them,” says Benson, the facilities-equipment and steelworker operations leader.) Team 4 estimated the cost savings from simply turning off such machines could be roughly $36,000 a year.

But the broader message is meant to teach everyone who works on the shop floor that reducing energy consumption at work has a wider environmental impact in the community. Benson and Willard, the machine repair operations leader, summed it up as “What can we do today to save tomorrow?”

Similar work took place in the other 20 Gas Power facilities around the world. The result could deliver a projected annual energy reduction of 35 million kWh — the equivalent of 25,000 metric tons of CO2 — and cost savings of an estimated $3 million. Schenectady reported an annual energy reduction: 12,583 MWh, which equates to $320,000 in cost savings. They had lowered their annual usage by 8% — well above the original 3%-5% target.

There were many lessons that the SFO group took away from their work by the end of the kaizen week. To Lovelace, the biggest might be how her facilities group is taking ownership of the energy savings it achieved. “One of the things that I think sometimes we struggle with in SFO is raising our hand and going, ‘Yeah, we did that,’” says Lovelace. “We have a lot of engagement with our technicians, we generate ideas and solutions daily. The kaizen gave us the opportunity to turn our plans into action.”