The Greatest Program That Never Was: The US’s Answer To The Concorde Never Took Off — But It Helped Shape The Future Of Passenger Travel

First-time visitors arriving for a meeting at GE Aviation’s headquarters should give themselves a few extra minutes: Located in the Cincinnati suburb of Evendale, Ohio, the plant is huge, security is tight — and there are distractions everywhere. Perhaps the largest, a massive jet engine stretching some 27 feet long, collects dust along a wall inside Building 700. Too big to fit in the company’s museum, which is also located on the Evendale campus, the lone surviving GE4 turbojet is a stunning relic from an era when everything in commercial aviation seemed possible.

On New Year’s Day 1967, the U.S. government announced with great fanfare that the engine would power America’s first commercial supersonic transport (SST), the country’s answer to Europe’s Concorde and the Soviet Union’s Tupolev Tu-144. The engine, designed and built by GE workers, became a great engineering feat, and brought with it the promise of billions of dollars in revenues and thousands of jobs.

But it was not to be. Just five years later, Congress killed the enormous government-funded aviation project, and the Europeans went on to introduce supersonic passenger travel to the world with the Concorde.

Still, though it never entered production, the engine’s legacy lives on. Any crafty jet engine designer can tell you that futuristic engine developments advance the science and art of jet propulsion. This was certainly the case with the GE4. Its unique aerodynamics, high-temperature materials and intricate cooling schemes in the turbine section allowed it to become the most powerful jet engine of its era and a symbol of GE ingenuity.

It also gave GE engineers insights in designing efficient air-cooled jet engine turbines that thrust the company in the commercial aviation market. The breakthrough allowed GE Aviation, now a $30.6 billion (2018 revenues) global business, to build the first high-bypass jet engine, essentially the grandfather of the efficient engines that power the vast majority of today’s commercial jets, including the GE9X, the world’s largest and most powerful jet engine. 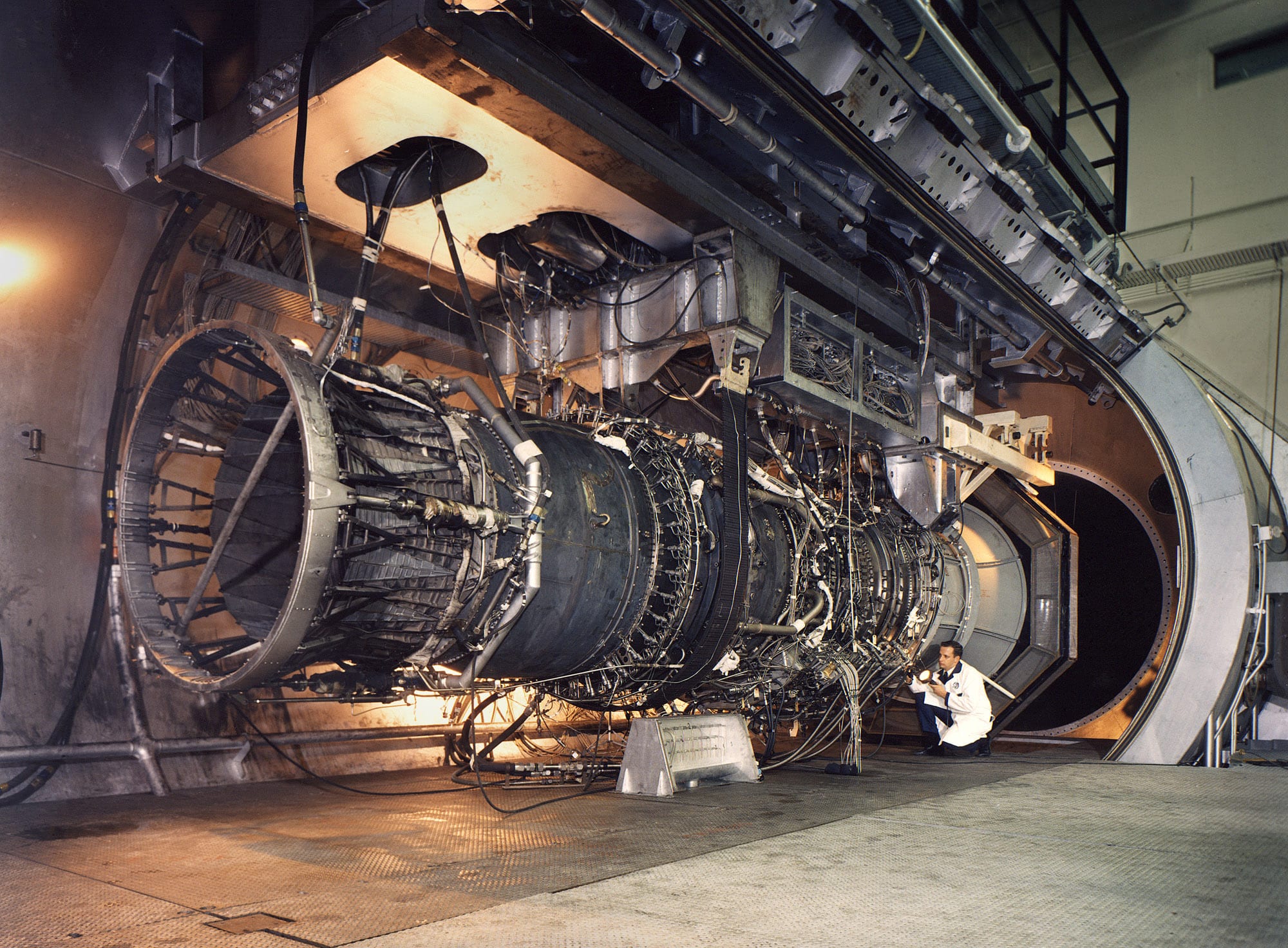 The GE4, designed for Boeing's 2707 supersonic jet, was 27 feet long. It was the only passenger jet engine with an afterburner. Top and above images credit: GE Aviation.


The SST saga in America unfolded in 1962 after the French and British governments formalized a joint technical team to develop a supersonic passenger jet called the Concorde. Not to be outdone, the Soviet Union announced its own supersonic transport, the Tupolev Tu-144. Unlike the Concorde, the Tu-144 program never fully took off and the plane ended up carrying mostly mail and cargo, and helping with supersonic research.

When the U.S. government launched a full-blown SST competition in 1964, it was only natural that Boeing and GE would work together — they’d teamed up previously on the U.S. Air Force’s high-speed XB-70 Valkyrie bomber. Boeing’s 2707 aircraft design called for “variable geometry” wings that are straight at takeoff and then move closer to the fuselage at higher speeds. The GE4 engine for the aircraft was based heavily on the J93 turbojet powering the XB-70.

Boeing and GE had an inside track. In 1965, the J93-powered XB-70 bomber achieved Mach 3, three times the speed of sound, after being airborne for 62 minutes at altitudes beyond 70,000 feet. An aircraft of this size and weight had never traveled so high and fast. The J93 turbine-cooling innovations were critical to the GE4 for the Boeing SST project.

When the Boeing 2707 and GE4 engine were selected for the SST program in 1967, newspapers called the program America’s largest airplane project ever. The four-engine 2707 was designed to carry 350 people at 1,800 miles per hour. Boeing forecast the aircraft’s entry into service by the 1970s and a 700-aircraft production run by 1990.  GE forecasted $4 billion to $7 billion in jet propulsion business over the next 20 years with hundreds of employees to be hired at Evendale.

The GE4 was also the world’s first large commercial jet engine with an afterburner. GE designed the engine for thrust levels beyond 60,000 pounds; it would be optimized to operate at Mach 2.7 cruise speeds at 60,000 to 70,000 feet. In short order, the GE4 became the world’s most powerful turbojet, producing 69,900 pounds of thrust during ground tests in Peebles, Ohio, GE Aviation’s “proving grounds” for jet engine. (The SST program led to the construction of Evendale’s unique dual-cell altitude test facility, which is used to this day.) 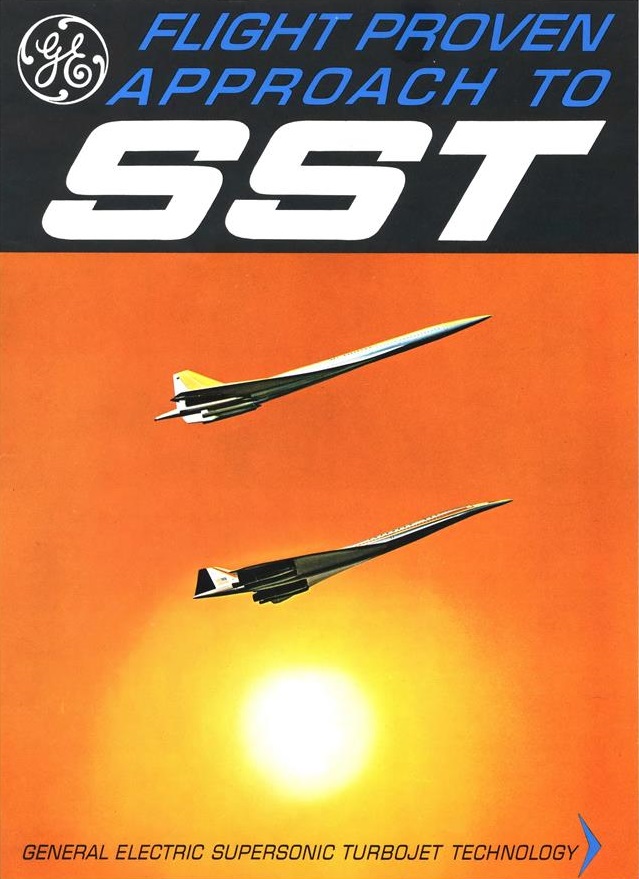 
However, trouble was looming. By mid-1968, Boeing pushed out the aircraft service entry to the 1980s. Some Congressional leaders also loudly objected to such high levels of government funding for a private commercial enterprise and questioned its economic and environmental viability.

GE and Boeing were able to keep the SST program going until March 1971, when Congress killed it. A leading Capitol Hill critic of the program distributed Champagne in plastic cups on the Senate floor after the program went down in a 51-46 roll call. While Proxmire cheered, GE promptly announced 1,500 layoffs in greater Cincinnati, a loss equivalent to $14 million annually for the local economy.

That May, a Congressional delegation moved to restart the SST program, but Boeing and GE demanded reimbursement of termination costs from the original program before proceeding. GE’s position was that the government should finance 100% of a new project, compared to 90% for the original one. With GE and Boeing standing firm on their demands, interest in restarting the program eroded on Capitol Hill.

Back-to-back cancellations of the XB-70 bomber and SST created great anxiety and pain at GE Aircraft Engines, the predecessor of GE Aviation. In 1971, GE’s aviation plants eliminated 7,000 workers, reducing overall employment from 27,000 to 20,000. “We had a damn good engine for the SST, and I was always unhappy that we didn’t have the opportunity to use it,” wrote the late GE Vice Chairman Jack Parker in his memoirs. Equally troubling, GE’s massive commitment to the SST led the company not to compete for a new four-engine jetliner being developed by Boeing. It was soon called the 747, with the nickname Queen of the Skies. Ouch. 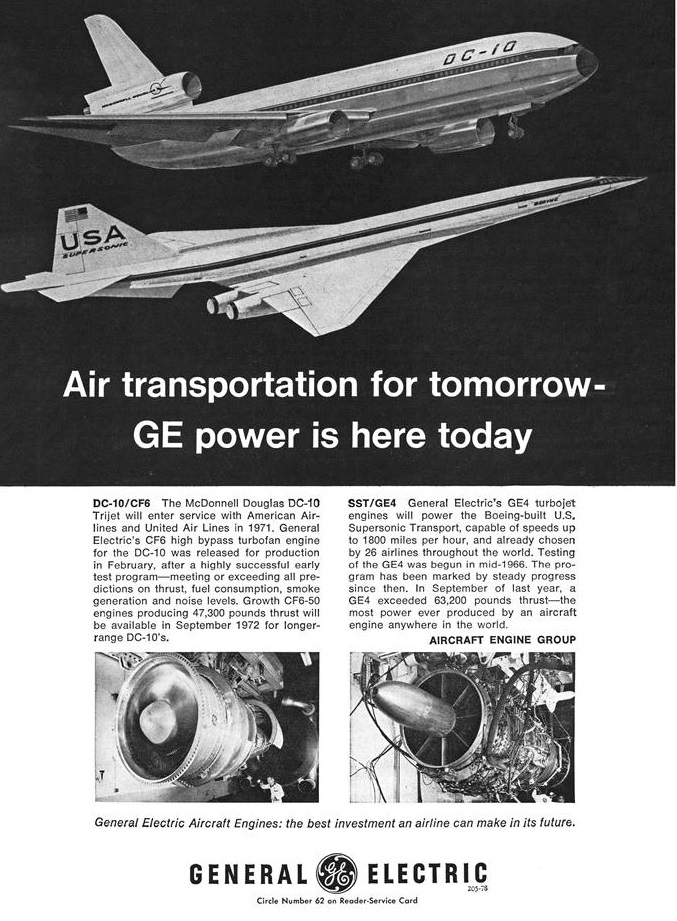 But despite the heartaches, GE Aviation proved remarkably resilient. The company’s CF6 commercial turbofan family, taking advantage of GE4 engineering breakthroughs, launched in 1968. It proved wildly successfully in the 1970s and 1980s on several twin-aisle jumbo jets, including subsequent versions of that same Boeing 747. Planes with later versions of that engine still carry passengers today. In 1972, GE Aviation’s operations in Lynn, Massachusetts, launched the T700 turboshaft engine with the U.S. Army. Powering Black Hawk and Apache choppers, it became the most popular helicopter engine in the western world for a half century.


And within months of the SST cancellation, GE Aviation head Gerhard Neumann forged a strong relationship with Rene Ravaud, the head of the French engine company Snecma, known today as Safran Aircraft Engines. In the next several years they would launch a joint engine company called CFM International, which went on to sell more jet engines than any company in aviation history. CFM’s latest product, the LEAP engine, powers the next generation of super-efficient single-aisle jets like Airbus A-320neo. CFM has received orders and commitments valued at more than $225 billion.

Passenger supersonic flight is also coming back, though for planes nowhere near the size of the 2707. Early in February, Boeing announced it would partner with Aerion Supersonic, a Nevada company that has spent the last two decades developing a supersonic business jet called the AS2. The plane, which is scheduled to fly for the first time in 2023, will carry as many as 12 passengers as fast as 1,000 miles per hour, or Mach 1.4. That’s 40 percent faster than the speed of sound and 70 percent faster than most of today’s business jets. The plane could cut a transatlantic flight by three hours, and a journey across the Pacific Ocean by five hours. GE Aviation is building the engine for the plane.

A version of this story originally appeared on GE Aviation's blog.