Where does the human end and the machine begin? In the era of neuroprosthetics, tiny electronic devices embedded in the body that stimulate the brain and other parts of the nervous system to improve their function, this question may soon get harder to answer.

Last week, for example, researchers at the Federal Institute of Technology in Lausanne, Switzerland, introduced a flexible neural implant that delivers electric and chemical pokes directly to the nervous system. In early trials, it allowed paralyzed rats to walk again with fewer side effects than other treatments.

The device, called e-Dura, is made from a material that mimics the dura matter, the thick membrane that protects the brain and the spinal cord. It could become the first long-term neuroprosthetic implant that could stay inside the human body for as long as 10 years. “This opens up new therapeutic possibilities for patients suffering from neurological trauma or disorders, particularly individuals who have become paralyzed following spinal cord injury,” says Stéphanie Lacour, the electrical engineer who led the work. The research was reported last week in the journal Science.

Lacour is not alone exploring the limits of neuroprosthetics. “I’m encouraged by the work of Lacour and the opportunities for material science to help enable long-term viability” of implants, says Jeff Ashe, electrical engineer at GE Global Research who is involved in GE’s brain research. “One of the keys to future success of brain-machine interfaces is the ability for such devices to be compatible with the human body for decades or more.”

Ashe is working with neuroscientist John Donoghue and his team at Brown University on decoding the signals used by the brain to control the body. “If you can understand the brain’s language, you’ll be able to understand the nature of how one particular disease has affected a certain function,” he says. 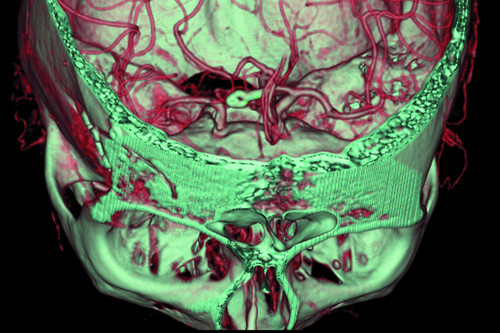 Implants could benefit patients with depression and neurological diseases such as Alzheimer’s or Parkinson’s. Image credit: GE Healthcare

The partners are developing tiny sensors that will be able to pickup electrical signals produced by individual neurons. He believes that scientists will soon know how groups of neurons work together to control brain function. “We want to take that outside the body via an external device that can mimic these signals and restore motor control,” Ashe told GE Reports.

The work is part of a broader push by GE to see the brain more clearly, which includes the company’s medical imaging as well as software and analytics businesses.

The global market for neuroprosthetics could reach $14 billion by 2020, growing at a compound annual rate of 15 percent, according to the data from Research and Markets. The fastest growing segments will include retinal implants, and devices helping patients manage symptoms of Parkinson’s, epilepsy and overactive bladder syndrome.

Research and Markets reported that a majority of patients with “debilitating” cognitive and psychological disorders were “unamenable to any form of treatment as first line (drug) and second line (invasive surgeries) treatments fail.” But neuroprosthetics offer a solution.