The Edge of Healthcare: Localized Computing Can Give Doctors Access To AI And Faster Diagnoses

Many doctors and industry experts agree that artificial intelligence-assisted medicine will change healthcare. They already use advanced algorithms to process reams of clinical data that help speed the diagnosis and treatment of conditions such as pneumothorax, cancer and even complications from COVID-19. The looming question is: How will AI roll out in the wider hospital setting?

The answer has been hard to come by, especially in a world accustomed to shuttling data over internet connections to distant supercomputers powerful enough to perform AI tasks. That doesn’t always work in the medical world, where doctors face thickets of privacy regulations or battle standardization issues rooted in disparities that may arise when analyzing data from different MRI scanners. And of course, every doctor is desperate for rapid real-time processing. The delays caused by network lag make centralized computer systems somewhat unworkable.

Enter “edge computing.” It involves installing more powerful computers on-site, close to whichever device is producing the data, and allowing those computers to tackle the most critical calculations. Putting computers as close as possible to patients and doctors, right at the point of care where exams and diagnoses take place, can increase the speed and security of the data being analyzed. They can still connect to networks of supercomputers elsewhere while putting the power of AI at doctors' fingertips, making advanced diagnostic aids as accessible as a weather app on a smartphone.

GE Healthcare launched its latest edge computing technology, a powerful server called Edison HealthLink, in October. Edison HealthLink can aggregate, correlate, analyze, display and share data from a network of clinical devices. And it gives its users a way to connect to GE Healthcare’s powerful Edison intelligence platform, host to dozens and dozens of applications that allow clinicians to perform tasks like analyzing hi-res images of the brain and measuring a patient’s aggregate radiation and iodine exposure.

An Edison HealthLink can host these Edison apps, allowing doctors and clinicians to customize it to fit their needs. They can also use this edge computer to connect imaging devices like MRI machines with other systems they already own — image archives and patient records, for example. Down the line, they will be able to use the edge computers to interface their clinical systems with new AI algorithms developed by both academics and for-profit companies. “More and more AI is getting embedded into systems like medical imaging and patient monitoring,” says Amit Phadnis, chief digital officer and vice president at GE Healthcare. 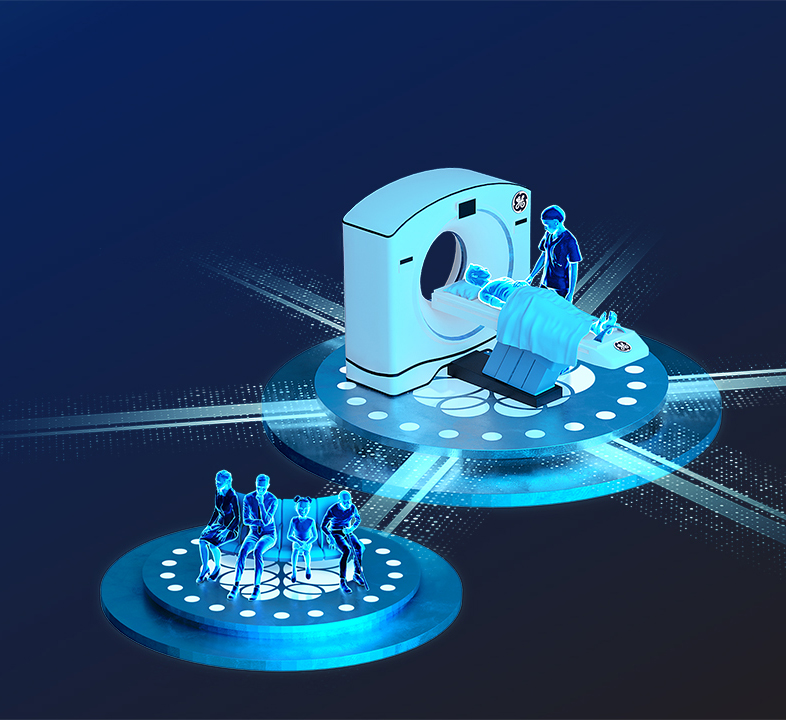 Keith Dreyer, chief data science officer at Boston’s Mass General Brigham and head of the organization’s Center for Clinical Data Science (CCDS), has been testing the Edison ecosystem as part of a collaboration with GE Healthcare. The hospital is currently using Edison HealthLink to develop new deep learning algorithms — a form of artificial intelligence in which a computer trains on archived data — such as reducing “noise” in scans from older MRI machines and producing clearer images. Running these algorithms requires tremendous computing power, which comes at a cost, but it allows the hospital to extend the life and improve the quality of their older MRI machines, Dreyer says.

Dreyer and his team are also hoping to use Edison HealthLink and the Edison platform, for example, to help doctors predict whether COVID-19 patients will take a turn for the worse. Some coronavirus patients can experience mild symptoms for a few days and then see a rapid decline in health. So Dreyer’s team is supporting the development of a deep learning model that can predict COVID deterioration in patients, by marrying imaging data like chest X-rays with clinical patient data — blood oxygenation levels, say, or factors like whether a patient is being ventilated or suffers from diabetes. Ultimately, the team hopes that Edison HealthLink can act as the bridge between the disparate data and software environments and look for patterns that emerge from the entire data set.

Writing software that doctors need is another important part of the puzzle. Here, just as the iPhone app store led developers outside of Apple to build software for an Apple device, the Edison platform allows third parties to build AI tools for doctors. In fact, the company has released a software development kit — the Edison Developer Program — says Priya Achaibar, a senior program manager with GE Healthcare.

Taking an MRI and adding in the results of patient blood work or pathology samples and demographic data using AI can create a much richer picture than simply applying the technology to one mode of diagnosis such as imaging, says Dreyer. “That’s where the real algorithmic power lies.”