The future’s going to be great, according to some of the coolest scientific advances this week: Robot fish will have their own circulatory systems, we’ll wear gravity-defying boots inspired by the adhesive properties of snails, and robotic limbs will be controlled by brain waves — no implants required. Read on for more about this intriguing new world.

Making A Mesh Of It

3-D meshes are designed to be lightweight and conformable, similar to fabric and textiles. Image and caption credits: M. Scott Brauer/MIT News.


What is it? At MIT, engineers have designed 3D-printed mesh materials for medical applications “whose flexibility and toughness they can tune to emulate and support softer tissues such as muscles and tendons.”

Why does it matter? 3D printing is already used to make customizable devices for specific patients, like prosthetic limbs and hearing aids. Most 3D-printed parts, though, are made from inflexible materials. The mesh is meant for cases where a little give is desired, like knee and ankle braces, and even internal implants like hernia meshes. “This work is new in that it focuses on the mechanical properties and geometries required to support soft tissues,” said Sebastian Pattinson, an MIT postdoc who’s now on the faculty of Cambridge University, and who is the lead author of a paper in Advanced Functional Materials.

How does it work? Pattinson and colleagues were inspired by two things: collagen, the structural proteins that make up bodily soft tissue, and textiles — particularly, the ways that they bend and conform. Taking cues from collagen’s molecular structure, Pattinson “designed wavy patterns, which he 3D-printed using thermoplastic polyurethane as the printing material,” according to MIT. “He then fabricated a mesh configuration to resemble stretchy yet tough, pliable fabric.” The team tested the material as an ankle brace, a knee brace and a glove whose surface was replaced by 3D mesh that “conforms to a wearer’s knuckles, providing resistance against involuntary clenching that can occur following a stroke.”

What is it? Scientists at Penn Engineering have developed an adhesive substance that can be, essentially, turned on and off: It sticks to a surface, releases from it and can be reused.

Why does it matter? As Penn points out in a release, one drawback common to most adhesives is that they’re single-use: You can’t reseal an envelope. With the new substance, though — described in PNAS — you might be able to. It could also be used to hang (and re-hang) pictures and posters, in industrial applications like car assembly, and even in futuristic uses like “gravity-defying boots.”

How does it work? The Penn engineers were inspired by snails, which can cement themselves to a spot, stay awhile, then let go and move on. (If only it were always that easy ...) They landed on a polymer called polyhydroxyethylmethacrylate, or PHEMA. When wet, the substance conforms to the grooves or ridges of whatever object it’s attached to. When it dries, unlike other substances, it doesn’t shrink or contract — it hardens as is, fastening itself to the cavities. That’s similar to how the snail’s epiphragm works: It hardens itself to a surface during the day, when it’s sunny and dry; at night, when it’s moister, the substance releases the snail to move about. “When it’s conformal and rigid, it’s like super glue,” Penn Engineering professor Shu Yang said about the PHEMA adhesive. “But, magically, you can rewet it, and it slips off effortlessly.” 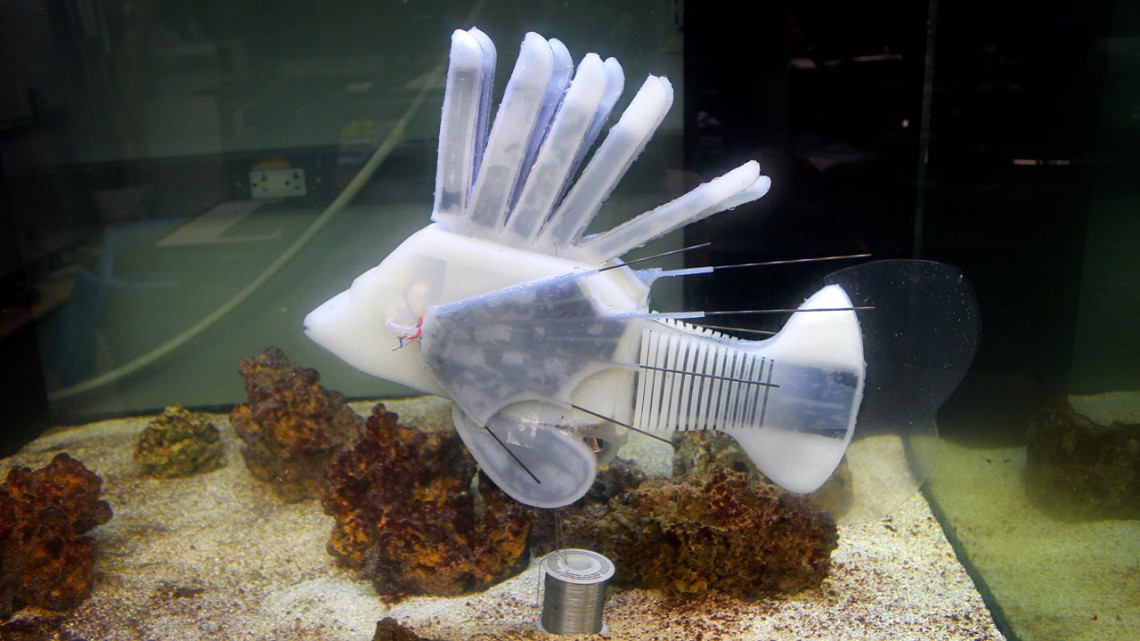 
What is it? Researchers from Cornell and the University of Pennsylvania have invented a soft robot fish that uses synthetic blood — pumped through an artificial circulatory system — and can swim for up to 36 hours.

Why does it matter? Scientists have long been interested in robots whose functionality mimics that of human bodies, but one limitation they’ve come up against is that the various systems within human bodies — circulatory, respiratory, and so on — are intricately integrated with one another. That’s a bit harder to achieve in robots, and the fact that their batteries are often housed in different places than their motors, for instance, can affect their longevity. Rob Shepherd, head of Cornell’s Organic Robotics Lab and senior author of a paper describing the technology, said, “In nature we see how long organisms can operate while doing sophisticated tasks. Robots can’t perform similar feats for very long. Our bio-inspired approach can dramatically increase the system’s energy density while allowing soft robots to remain mobile for far longer.”

How does it work? In the robot fish, inspired by a lionfish, various systems collaborate with one another. According to Cornell, the device relies on “a synthetic vascular system capable of pumping an energy-dense hydraulic liquid” — that’s the all-important “blood” that’s at the heart of this achievement; it “stores energy, transmits force, operates appendages and provides structure, all in an integrated design.”


What is it? Working with colleagues at the University of Minnesota, researchers at Carnegie Mellon University have developed a technology for people to control robotic limbs with their brains — without the requirement of implants.

Why does it matter? Robotic limbs controlled via brain-computer interfaces, or BCIs, are a promising subject of medical pursuit: They could allow paralyzed people, for instance, to perform routine daily tasks. But so far BCIs have required risky, costly invasive surgery to actually implant sensors in the brain. Bin He, head of biomedical engineering at Carnegie Mellon, said, “There have been major advances in mind-controlled robotic devices using brain implants. It’s excellent science. But noninvasive is the ultimate goal.” But so far noninvasive devices have had other hurdles to jump: namely, that from outside the brain, they’re not able to get a clear enough signal.

How does it work? By eliminating the static, basically: He and his colleagues found a way to use noninvasive neuroimaging and machine learning to separate the signal from the noise, achieving “a high resolution of control over a robotic arm.” The team demonstrated its technology by having a mind-controlled robotic arm follow an on-screen computer cursor. It’s been successfully tested on 68 able-bodied subjects, and researchers plan to begin clinical trials “in the near future.” The technology is described in Science Robotics.

Sunlight Is the Best Desalinator 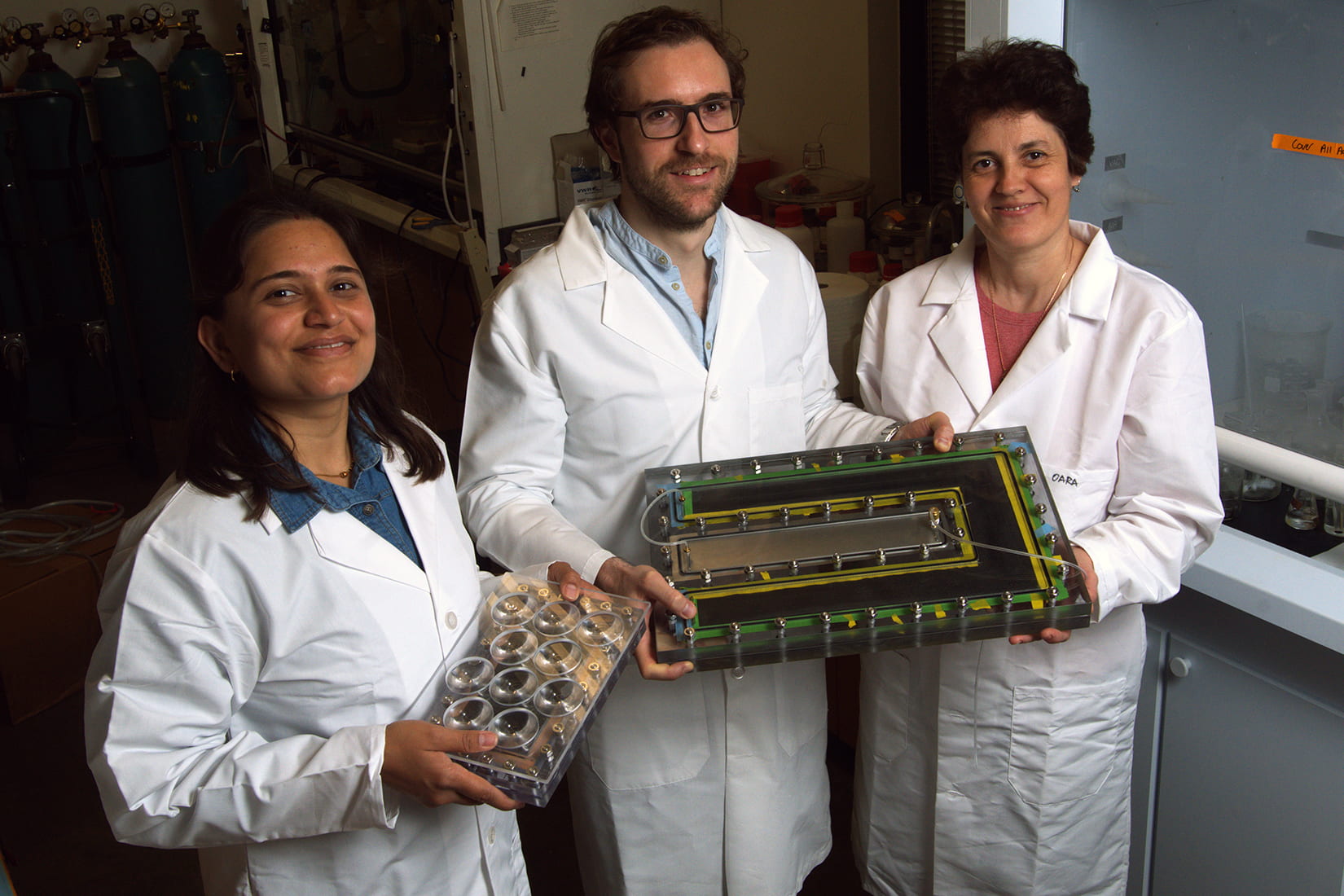 What is it? Scientists at Rice University’s Laboratory for Nanophotonics found that they could increase the efficiency of a solar-powered desalination system by 50% by using cheap plastic lenses to concentrate the sunlight.


Why does it matter? It’s not news that there’s a limited supply of freshwater on the planet: A new story in SingularityHub highlights the fact that Cape Town, South Africa, came “dangerously close to being the world’s first major city to run out of water” in 2018. Given that the problem will only get worse as the world’s population climbs — and so do global temperatures — it would be quite helpful if we could rely more on liquid that’s not currently easy to drink: seawater. Current desalination technologies are costly and require a lot of energy, though; hence the pursuit of a method that’s cheap and efficient.

How does it work? One promising avenue in desalination research, SingularityHub reports, is solar power, including the technique designed by the Rice researchers. They build off an existing method, membrane distillation — where hot salty water flows across one side of a membrane, cool filtered water flows on the other side, and the temperature difference forces the saltwater through to the other side, thereby filtering it. The Rice scientists call their method nanophotonics-enabled solar membrane distillation: They coat the membrane with inexpensive light-absorbing nanoparticles that can convert more than 80% of solar energy into heat. That concentrates sunlight into “hot spots” on the membrane, increasing the vapor pressure that forces water through the filter — and thus the efficiency of the system. Read more about it in PNAS.