Scientists unlocked an elusive wavelength, got a good look at the structure of a key influenza protein, and found that room-temperature superconductors — a physics holy grail — might be closer than we thought. Everything is revealed in this week’s roundup of scientific discoveries — or, at least, five cool things are.

Skin In The Game 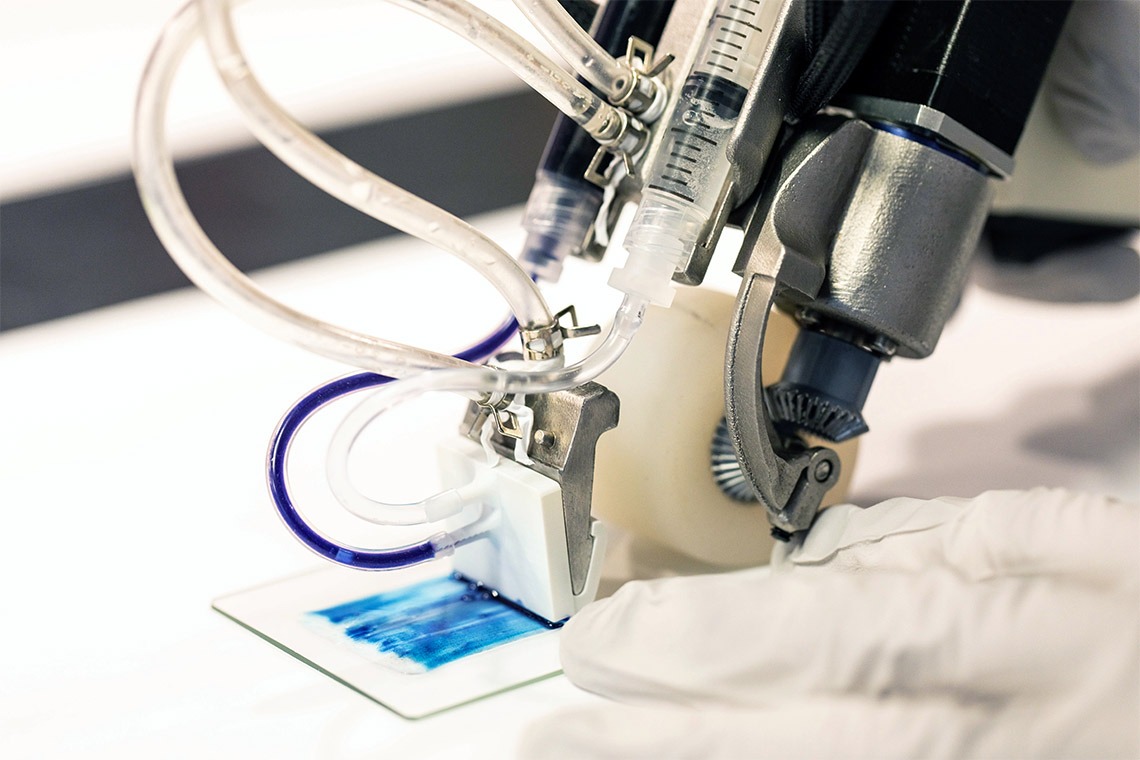 The handheld 3D skin printer developed by U of T Engineering researchers works like a paint roller, covering an area with a uniform sheet of skin, stripe by stripe. Blue dye is added here for visibility purposes. Image  and caption credit: Daria Perevezentsev/University of Toronto.


What is it? A handheld 3D printer developed by Canadian researchers can “print” skin cells directly onto the wounds of burn victims.

Why does it matter? Skin grafts — where doctors replace burned skin with healthy tissue taken from another area of the body — are the standard treatment for severe burns. But they’re of limited use when a patient has suffered extensive burns, explained the University of Toronto’s Axel Günther, the senior author of a new paper in Biofabrication: “In cases where a patient has extensive full-thickness burns — which destroy both the upper and lower layers of the skin — there is not always sufficient healthy skin left to use.”

How does it work? The 3D printer produces “skin sheets” that incorporate a bio-ink of fibrin, a protein associated with blood clotting, infused with mesenchymal stromal cells, which encourage cell growth and support the immune system’s response. The researchers tested the device on pigs, whose wounds healed well. Günther said, “We’ve shown that the device offers a user-friendly method for safe cell and biomaterial delivery. Further study is required, but the signs are promising and the potential clinical applications for the device extend well beyond full-thickness burn injuries.” 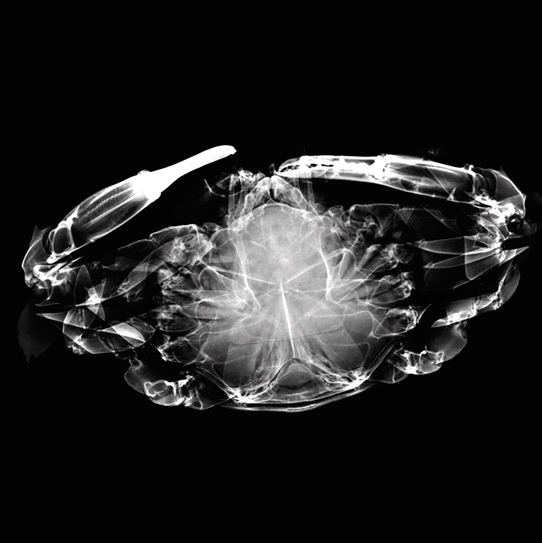 
What is it? An international team of researchers created a device that “will unlock the elusive terahertz wavelengths and make revolutionary new technologies possible.”

Why does it matter? “Elusive terahertz wavelengths” refers to a long-running problem called the terahertz gap: waves on the light frequency spectrum between microwave and infrared that scientists haven’t been able to take advantage of because of their low energy. If THz radiation could be accessed, it could be put to good use, as a 2007 article in Chemistry World explained: “THz radiation is non-ionizing, so it’s safe to use on humans, yet it can penetrate many visually opaque materials. This makes it potentially useful in security scanning for concealed weapons, explosives or biological agents such as anthrax. It interacts strongly with water but passes through a few millimeters of biological tissue, so can also be used for medical imaging, or to study the fundamentals of cellular and molecular biology.”

How does it work? Indeed, a device to amplify THz waves could open a “new era of medical, communications, satellite, cosmological and other technologies,” according to Loughborough University, one of the institutions involved in the research. Scientists developed an optical transistor that uses layers of graphene and a high-temperature semiconductor to amplify THz waves; it’s described further in a new paper that will be published in Physical Review Letters (PDF). 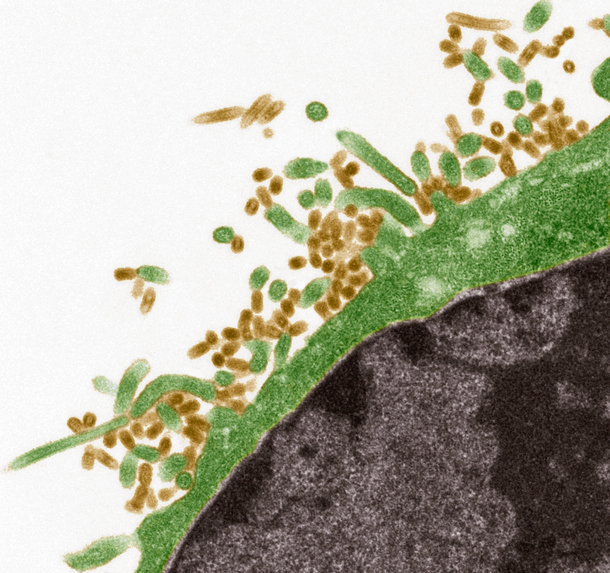 A new protein could help researchers understand how strains of the flu virus differ, and develop drugs to combat them. Image credit: Getty Images.


What is it? Chemists at the Massachusetts Institute of Technology “discovered the structure of a key influenza protein” called BM2.

Why does it matter? There are three classes of flu virus — A, B and C — with A usually being the most common, especially early in flu season. This year, though, influenza B has predominated, accounting for about two-thirds of reported cases in the U.S. Each class of flu virus is associated with a different kind of M2 protein, and getting a snapshot of its structure in flu B — which is what the MIT team focused on, using nuclear magnetic resonance spectroscopy — could help researchers understand how the virus strains differ, and develop drugs to combat them.

How does it work? BM2 is a “proton channel that controls acidity within the virus,” per MIT, helping it release genetic materials into infected cells. Mei Hong, an MIT chemistry professor and senior author of a new paper in Nature Structural & Molecular Biology, said, “If you can block this proton channel, you have a way to inhibit influenza infection. Having the atomic-resolution structure for this protein is exactly what medicinal chemists and pharmaceutical scientists need to start designing small molecules that can block it.” 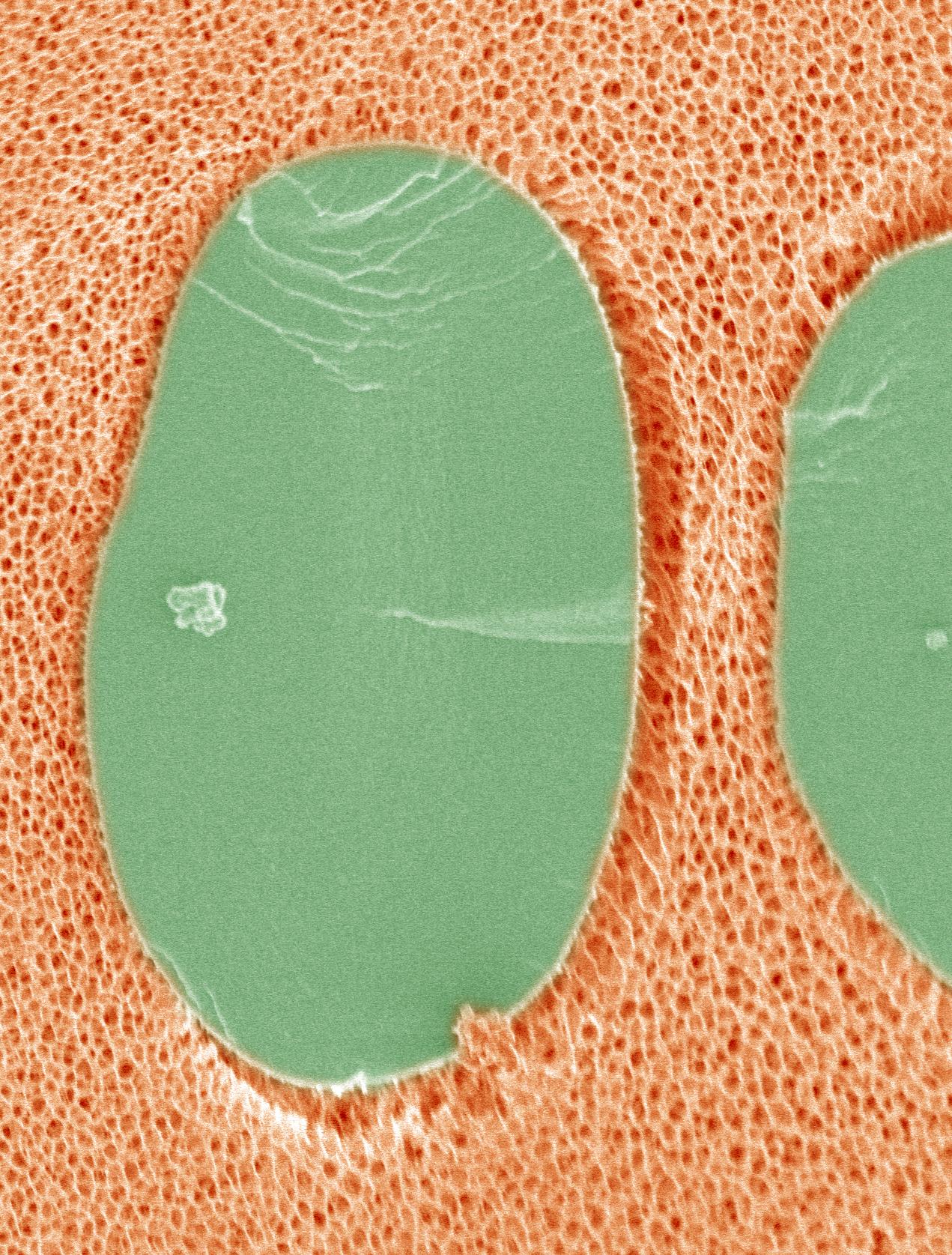 
What is it? Two scientists from the University of Chicago created a skinlike synthetic tissue that can “stretch, heal and defend itself.”

Why does it matter? As U. of C. writer Louise Lerner notes in a news release, synthetic tissue is usually only able to mimic “one or two of biological tissue’s characteristics: malleability but not strength, or strength but not self-healing.” The new synthetic material is both strong and malleable and “can defend itself by reorganizing its internal structures”; it could have uses in soft robotics, medical implants and even food packaging. The tissue is described in the journal Matter.

How does it work? Like many great ideas, this one started with noodles — specifically, the resilient hand-pulled noodles of Xi’an, the city in China where chemistry professor Bozhi Tian is from, and which gave Tian and his colleague Yin Fang an idea. The key ingredient for making those noodles strong and elastic, starch, turned out to be just the thing in synthetic tissue: The pair found that “granules of common starch can be the missing ingredient for a composite that mimics many of the properties of tissue.” They embedded the starch in a gel matrix to create a material that was not just strong and flexible but also had a kind of memory, acting the way that muscle does after it’s stretched: “This ‘memory effect’ in particular is extremely difficult to replicate synthetically,” Tian said.

A Holy Grail of Physics 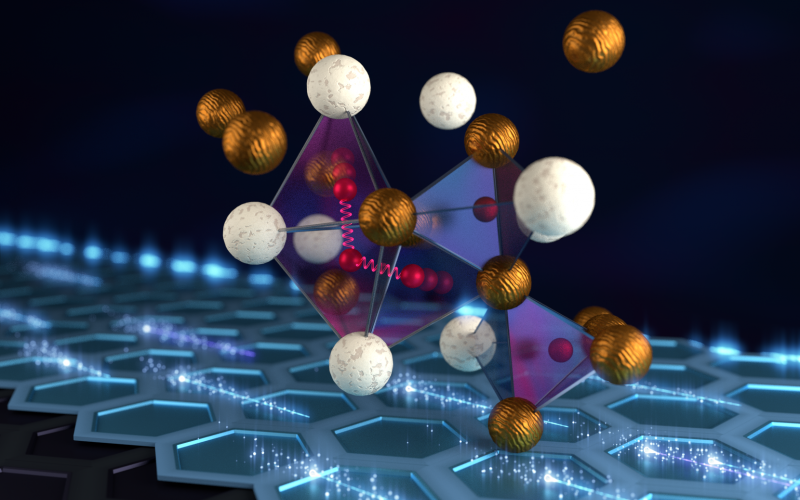 
What is it? Researchers from the U.S., Poland and Switzerland took advantage of blazing-fast computing power to determine that “the hydrogen atoms in a metal hydride material are much more tightly spaced than had been predicted for decades.” That might lead the way to superconductors that operate at or near room temperature and pressure: an energy breakthrough.

Why does it matter? Superconductors carry current without any loss of energy due to resistance; they’d be an extremely efficient means of transmitting electricity and could store energy pretty much indefinitely. But with today’s technologies, they’ll operate only under extreme conditions. The “current highest-temperature superconductor,” which operates at around 8 degrees Fahrenheit, requires pressures up to 22 million pounds per square inch, according to Oak Ridge National Laboratory (ORNL) — that’s almost 1,400 times more pressure than is found at the deepest part of the ocean. “For decades, a ‘holy grail’ for scientists has been to find or make a material that superconducts at room temperature and atmospheric pressure, which would allow engineers to design it into conventional electrical systems and devices,” said University of Illinois at Chicago professor Russell J. Hemley, a professor at the University of Illinois at Chicago and co-author of a new paper in PNAS.

How does it work? With a little help from Titan, one of the world’s fastest supercomputers, housed at Oak Ridge. Timmy Ramirez-Cuesta, who leads the institution’s chemical spectroscopy team, explained, “ORNL is the only place in the world that boasts both a world-leading neutron source and one of the world’s fastest supercomputers. ... It took an ensemble of 3,200 individual simulations, a massive task that occupied around 17% of Titan’s immense processing capacity for nearly a week — something a conventional computer would have required 10 to 20 years to do.”