That’s Hot: This Lung-Inspired 3D-Printed Part For Cooling CO2 Could Take Power Generation To The Next Level

When Charles Parsons invented the steam turbine in 1884, it was a monumental advance. More than a century later, engineers are still relying on steam to operate the turbines that generate much of the world’s power. Perhaps it’s about time to take the technology to the next level.

One way to do that is to draw inspiration from the human body. That’s exactly what Peter deBock and his colleagues at GE Research in Niskayuna, New York, did: They devised a heat exchanger — an essential component of the cooling system of a power turbine — that mimics human lungs.

Heat exchangers are used in power plants to move energy from the hot exhaust that flows out of the primary gas turbine and transfer it to a secondary turbine power loop, or bottoming cycle, to generate more electricity. This process essentially cools the primary turbine exhaust flow with a “working fluid,” like the antifreeze of a car.

Most bottoming cycles use steam as the working fluid. Conventional alloys and manufacturing methods, however, limit operating temperatures to less than 1,200 degrees Fahrenheit.

But what if there were another way? By using other alloys, additive manufacturing (commonly known as 3D printing), and a different working fluid for the bottoming cycle, engineers hope to raise the operating temperature and increase thermal efficiency. Higher temperatures and pressures allow them to pack more punch into a smaller area and extract more energy from it.

One promising working fluid candidate is supercritical carbon dioxide, the same gas that makes soda fizzy. When temperature and pressure hit the right conditions, CO2 becomes supercritical — it acquires the density of liquid but flows more like a gas, and holds an enormous amount of heat energy. As a result, a power generator using it as a medium can be 10 times smaller and more efficient than one that uses steam, and also requires fewer parts. (GE Research is involved in a project led by Gas Technology Institute and partnering with Southwest Research Institute to build a $122 million, CO2 demonstration plant capable of generating of 10-megawatts of electricity (MWe).) 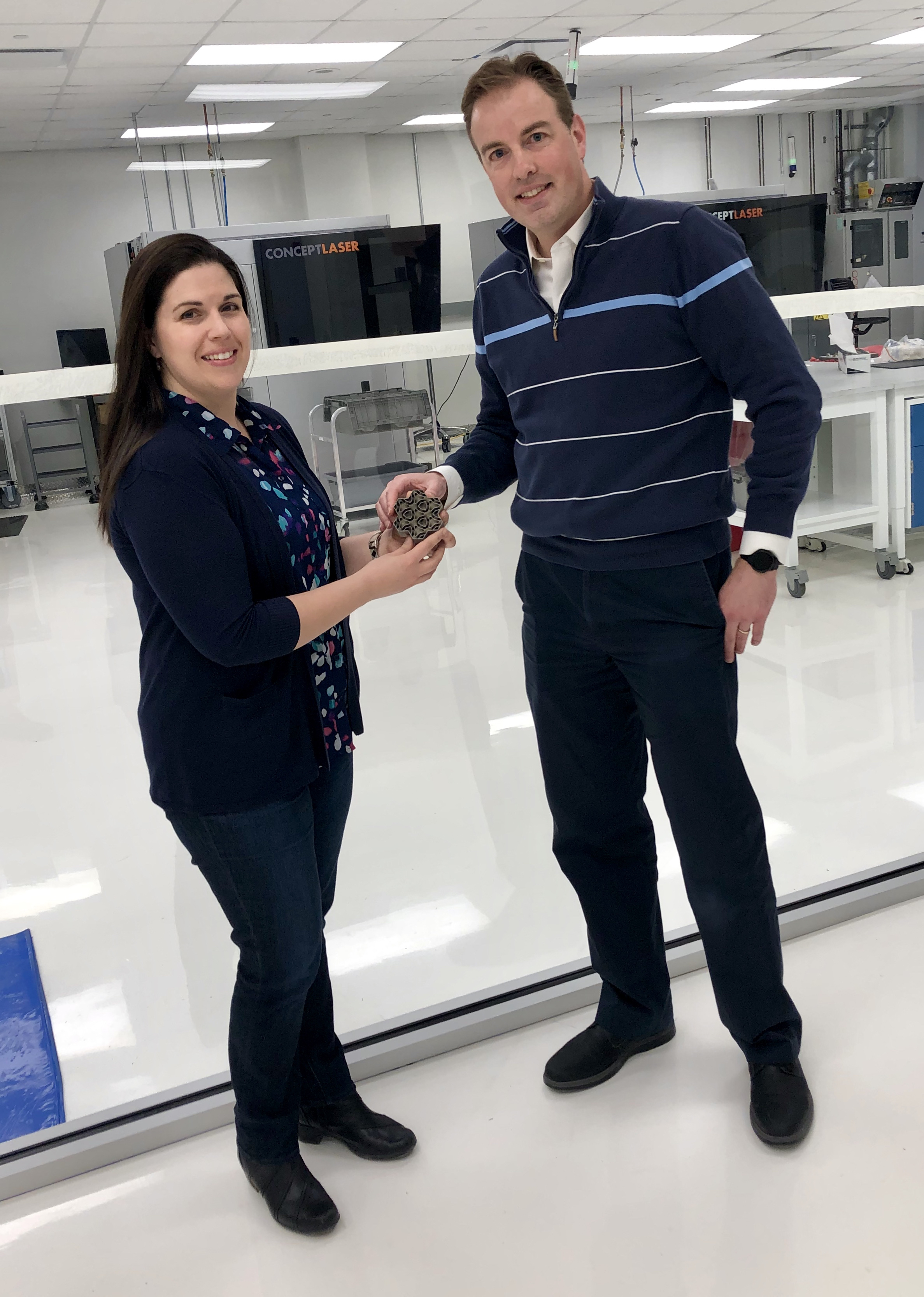 Top image: Combining deep expertise in high temperature metal materials, thermal management and additive manufacturing, GE Research Senior Engineer and Metallurgist, Laura Dial, and Peter deBock, a Principal Engineer and specialist in Thermal Management, will work with a team of GE specialists to design an ultra-performing heat exchanger that improves the efficiency profile for both power generation and advanced aerospace applications. Not pictured but also supporting this development are Bill Gerstler, a Principal Engineer in Thermal Management, and Dan Erno, an additive design specialist. Above: A prototype of a 3D printed heat exchanger designed by GE researchers Dan Erno and Bill Gerstler at GE’s Research campus in Niskayuna, NY. This heat exchanger was designed to have a tri-furcating structure where both fluids split in three directions and recombine continuously throughout the device, mimicking bio-inspired natural concepts like the human lungs to improve thermal efficiency. Images credit: GE Research.


Supercritical CO2 is a big priority for ARPA-E, the U.S. Department of Energy’s advanced research arm. Recently, ARPA-E put out a call for a new kind of heat exchanger that could help these advanced power plants handle temperatures of 1,650 degrees F — more than 450 degrees higher than current heat exchangers that use steam — at pressures of more than 3,600 pounds per square inch. (Atmospheric pressure at sea level is 14.69 psi.)

When deBock and his colleagues heard these requirements, their minds went to two advances simmering at GE Research’s labs in Niskayuna: “extreme design skills and extreme metallurgy skills,” deBock says.

Laura Dial, a senior researcher from the metallurgy team, worked to develop an advanced nickel superalloy for use in jet engine parts. The metal is capable of retaining sufficient strength at extreme high temperatures and is also suited for additive manufacturing, a relatively new technology in which a computer-controlled machine fuses together thin layers of material, including high-end metal, to build a part. Objects built by 3D printing can have much more intricate shapes than those made with conventional manufacturing techniques. “With 3D printing,” says deBock, “we can build design architectures that were previously impossible.”

3D printing paved the way for some radical thinking about how to design a heat exchanger for high temperatures and pressures. DeBock’s team took inspiration from human lungs, which play an important role in helping cool the body to about 98 degrees F. ”Lungs,” says deBock, “are the ultimate heat exchanger.”

The lung accomplishes its heat-exchange function with a network of capillaries, which split the flow of blood into small streams to maximize their exposure to the cooler air coming in from the outside, releasing heat and absorbing oxygen. The GE heat exchanger, designed by scientist Dan Erno, does something similar. It takes hot airflow that comes out of the gas turbine and splits and recombines it continuously into a trifurcating network of ducts, each less than 2.5 millimeters in diameter, that are interlaced with another network of channels filled with the colder working fluid (in this case, supercritical CO2) that runs in the opposite direction. The hot air and the working fluid are kept physically separate, but their close proximity allows for efficient heat exchange.

In April, ARPA-E awarded GE a $2.5 million, 2.5-year grant to develop a 50-kilowatt demonstration heat exchanger using its new design. GE’s partners in the project include Oak Ridge National Laboratory, which will contribute expertise in corrosion science to test and validate the material’s long-term performance, and the University of Maryland, which will aid with heat exchanger design and optimization expertise.