That’s Cool: GE and Quirky Release the First Ever Smart AC on Amazon

When Garthen Leslie worked at the Department of Energy, his job was to conserve resources. But at home, his air conditioner was wasting them. “I was tired of choosing between wasting energy or suffering through the stuffy summer heat.” His summertime dilemma got him thinking about developing a smart AC that he could control from his office.

Leslie came up with a sleek design and pitched the idea to Quirky, an online community of some 2,000 designers. Quirky and GE, which provided AC engineering know-know, helped him improve and finish the machine in just a few of months. Called Aros, it will be available for sale to everyone on Amazon, starting today.

The 8,000 BTU unit is connected to the Internet. Owners can control it with their smartphones over Quirky’s Wink app.

Aros gets smarter over time, learning from users’ schedules, habits, location, weather information and past usage. They can also choose an operating setting based on their budget. 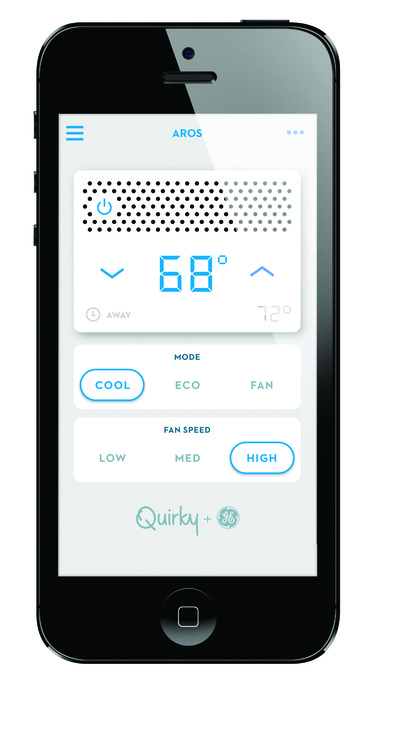 Quirky and GE partnered last year to develop a line of co-branded connected devices. GE opened its patent vault to the community and contributed electrical and mechanical engineering expertise. Consider, for example, that the company has been making air conditioners for 80 years.

GE is also helping bring Aros to market. Its appliances factory is helping lower the unit’s cost. The AC is expected to retail for $300.

“After receiving the submission for this invention, it was clear that this was a product that absolutely needed to exist, but [also] a challenge that most companies would shy away from,“ said Ben Kaufman, Quirky founder and CEO. “With the support of GE’s technology expertise, scale, and supply chain, we were able to focus our efforts on leveraging our community’s ideas into a beautifully designed product where every aspect of the product’s interaction was attended to.”

Kevin Nolan, vice president of technology for GE Appliances, said that Aros was "a great example of how by working together, GE and Quirky can re-invent an entire category quickly and at scale.”