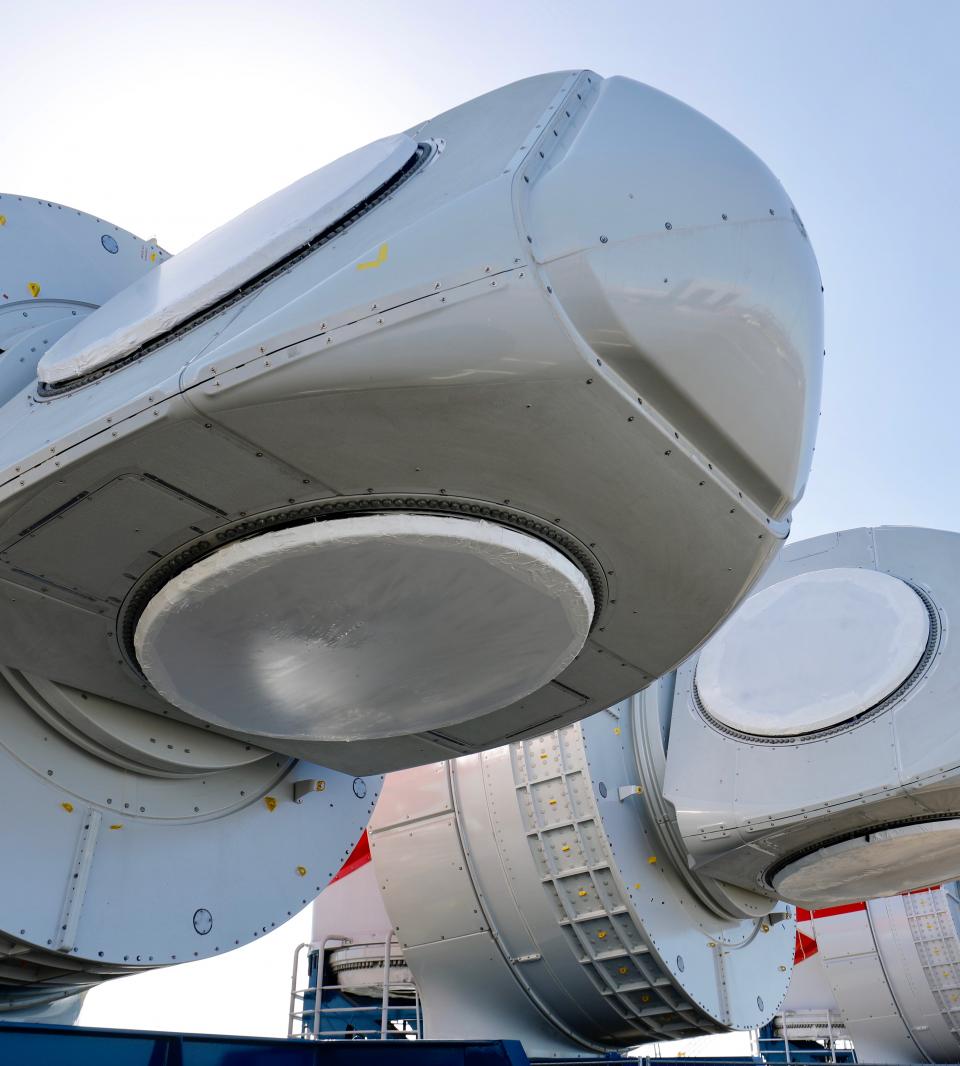 From a distance, the large blacktop parking lot behind GE’s wind turbine factory in Saint-Nazaire, France, looks like the Galactic Empire’s base for AT-AT walkers. Over the last few months, the field has been slowly filling up with rows of massive gray-and-red behemoths rising 10 meters from the ground.

But don’t get too excited. This is not a set for a new “Star Wars” movie. Unlike their doppelgangers on the frozen planet of Hoth, these steel giants will fight the elements in the stormy North Sea, some 28 miles from the sandy beaches of Germany’s Borkum Island. Perched 100 meters above the choppy waters, the turbines will power Merkur, a new 400-megawatt offshore wind farm. When it comes online in the second half of 2018, the farm will supply nearly half a million German homes with renewable electricity. Germany aims to generate 80 percent of all electricity from renewable sources by 2050, and the offshore wind farm is part of this transition.

GE is a relative newcomer to offshore wind. The company explored the field a decade ago and returned to the industry in 2015, when it acquired the energy assets of Alstom, and built its first wind farm in Long Island Sound near Block Island, Rhode Island, last year. As the inaugural offshore wind farm in the United States, the project made a splash even though it holds just five turbines. But Merkur, which will have 66 turbines, is a much bigger beast. “This one is special,” says Pascal Girault, who runs the Saint-Nazaire plant. “Everything is big.”

Girault spent the early part of his career managing supply chains for the car industry, but ramping up production for Merkur is no Sunday drive. Workers in Saint-Nazaire make generators and assemble nacelles for the 6-megawatt GE Haliade turbine. The nacelle is the casing on top of the tower that shelters the generator and other equipment. It includes some 30,000 components.

Adding to the task’s complexity, the composite blades for the machines’ 150-meter-diameter rotors come from GE’s LM Wind Power factory in Spain. The steel segments for the tower are being made in Germany and China. U.S. and European companies supply electronics and mechanical components for the converter and generator. “The scale and the speed of the project are challenging,” Girault says.

No kidding. Merkur has faced strong headwinds since its inception five years ago. The original developer of the project backed out, and so did the company picked to make the turbines. The project’s managers then turned to GE to help secure new financing for the wind farm and supply much of the technology that will produce power and move it onshore.

Girault started assembling the first nacelle for Merkur at the end of last year — and he had to get cracking quickly. At that time, the factory’s 170 workers had produced a grand total of 11 turbines, including the five for Block Island. “The whole scale just exploded,” says Michael Peffermann, GE’s project manager for Merkur.

Peffermann is hardly a stranger to large undertakings. Before joining GE, he built offshore rigs and bridges, including the Oresund Bridge, which connects Denmark and Sweden. He and Girault had to hire and train hundreds of new workers and managers, a competitive task in Saint-Nazaire. The port of 68,000 people is also home to a massive STX shipyard, which has produced some of the world’s largest cruise ships, including the Queen Mary 2. An Airbus factory visible from the GE lot makes parts for passenger jets, including the A380 double-decker.

Girault’s human resources department looked for technical talent and swift learners who could quickly grasp new skills. Many of the new recruits were women, who today make up a quarter of the GE plant’s workforce, often donning helmets, carabiners and other climbing gear required to scale the towering turbines moving along the assembly line.

Running on a parallel track, Natasa Maussion, the plant’s supply chain manager, started linking together a global network of suppliers for the 66 Merkur machines, as well as three more turbines for a wind project in China. Maussion, an engineer by training, came to GE from the German industrial giant ThyssenKrupp. She and Girault asked suppliers to deploy a “firewall” around their factories to make sure that faulty parts would not “pollute the work in progress” on their assembly line. “For the suppliers it’s an expensive process, but we need to make sure they fix any problems inside while we ramp up,” Girault says. “If you have even a 1 percent defect rate on each of our components, you’ll wait for a decade to get the Haliade out.”

Besides helping secure the supply chain, Maussion also works with the engineering team to implement design tweaks based on new insights from turbines already working in the field. Peffermann says that since the first Haliade was installed two and a half years ago, analysis has yielded more than 90 improvements. In order to accommodate the changes, the plant has switched to digital drawings and has started testing bar codes and radio-frequency identification sensors to track parts. Workers are also experimenting with augmented-reality glasses and other “brilliant factory” tools.

“We need to move fast,” Maussion says. “The goal for me is to go digital and help people find parts more easily and understand what happened.” Adds Girault: “Everything has to be in good order — the quality of our labor, but also of the tools and components coming in. Otherwise the process will break down.”

While Maussion and Peffermann must keep moving fast in Saint-Nazaire, they also have to make sure that the factories around the world making parts for the tower and the blades are not falling behind. That’s because the installation, which will begin early next year, will require its own complex dance.

GE will keep the nacelles in the “parking lot” in Saint-Nazaire until the fall, when it will ship them from the nearby port to a “marshaling harbor” in Eemshaven, Netherlands. In Holland, the nacelles will meet with towers and blades and head out to sea for installation in spring 2018.

Peffermann says that GE was able to shrink the net installation time considerably by doing “as much work as possible” onshore. The company also designed a frame that will allow workers to weld the 400-ton tower — twice as tall as the Statue of Liberty — in port and ship it in one piece. Says Peffermann: “We need this constant improvement, and maintaining it is a delicate balance.”