Start Me Up: These Huge Turbines Are Ready To Boost Brazil’s Smallest State

In the popular imagination, Brazil is an eternal carnival of sun, samba and soccer on the sand in Rio de Janeiro. Yet many Brazilians claim that the real Brazil is actually the country’s sprawling northeast region, which is a long way from the golden beaches of Copacabana and Ipanema. The Northeast is the home of capoeira, the hypnotic Afro-Brazilian martial art; the sertão, the country’s semi-mythical scrubby outback; and forró, the folk music that farmers sang in hope of bumper harvests of corn, sugarcane and coffee.

While the Northeast may be rich in spirit and culture, it is also the poorest of Brazil’s five regions. The area has nearly 30% of Brazil’s population of 60 million people, but it generates just a little over 13% of the country’s GDP. And all the capoeiristas notwithstanding, it also needs more energy. The Northeast has produced just 10-15% of the country’s power in recent years.

But there is good news on the horizon: A huge power plant boasting the world’s most efficient gas turbines is set to transform the region into a beacon of Brazil’s energy industry.

The Porto de Sergipe plant, in the tiny coastal state of Sergipe, successfully underwent first fire on Dec. 6 and first synchronization on Dec. 16, critical tests where engineers ignited and connected one of the three mighty 7HA.02 gas turbines built by GE to the grid for the first time in Brazil. “We are very proud of this milestone and to know that we are generating reliable power to the Brazilian people, ” says Luciano Silva, a project director at GE Gas Power. The three turbines, together with a giant steam turbine and three heat recovery steam generators (HRSG), are capable of generating a whopping 1.5 GW, or around 15% of the Northeast region’s power needs. Porto de Sergipe will now be the largest combined-cycle, gas-fired power plant in South America.

But Porto de Sergipe is not just a boon for the Northeast. The world’s fifth-largest nation, Brazil has an interconnected power grid, meaning the electricity generated by the plant can be shipped almost anywhere in the country, from the scorching semideserts of the northeast to the cool grassy plains of the south. And the project is important beyond the raw electricity it’ll provide — the GE technology used by the plant gives Brazil extra flexibility to manage its renewable-rich grid. 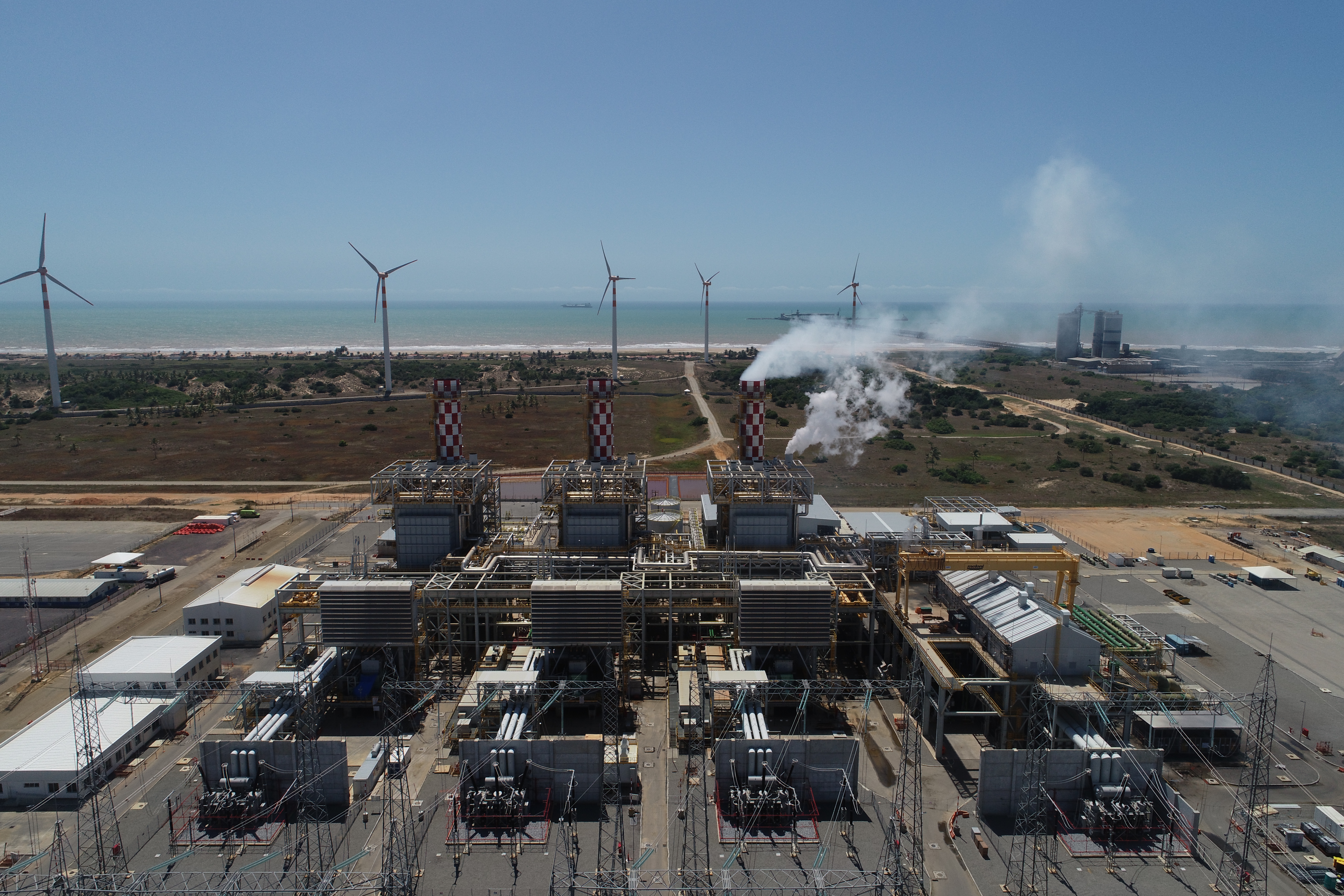 Brazil is reliant on hydropower for around 75% of its electricity and the rule of thumb is that the more it rains, the less Brazil needs to burn coal, oil and gas — and vice versa. So when the giant reservoirs in Brazil’s southeast and central-western regions threaten to run dry, as happened frequently in the 2011-2015 period, fossil fuels step into the breach.

That is why drought sends Brazil’s power sector scrambling to import liquefied natural gas (LNG), which is natural gas that has been chilled to a temperature of −265°F (−160°C), reducing its volume by a factor of approximately 600. In recent years, supercooled supplies of the fuel have arrived in Brazil in the hulls of huge ships exported from the United States, the Caribbean and West Africa. Once the LNG arrives at one of Brazil’s three terminals in Rio de Janeiro and the northeast states of Bahia and Ceara, it is regasified and piped to various generators that have purchased part of the cargo.

The system is not always perfect: Since the country is at the mercy of the elements and cannot always project its long-term LNG demand, it has often paid a higher price on the spot market for near-term delivery of the fuel, rather enter into long-term agreements for cheaper cargoes that it might not need.

But Porto de Sergipe, which is an integrated LNG-to-power project built on the coast, is slightly different. Centrais Elétricas de Sergipe (CELSE), the project operator, has a 25-year agreement to import up to 1.3 million tons of LNG from Ocean LNG, an affiliate of Qatar Petroleum, the world’s largest producer of the liquid fuel. CELSE will store the LNG in a floating storage and regasification unit (FRSU), a giant vessel moored a few kilometers off Aracaju, Sergipe’s capital. If CELSE orders a new cargo to top up the floating unit, Ocean LNG has a commitment to deliver within two months. The setup gives the operator a secure, exclusive supply of competitively priced LNG, and plenty of flexibility. “They can play around with power dispatch according to reservoir levels,” Silva says. 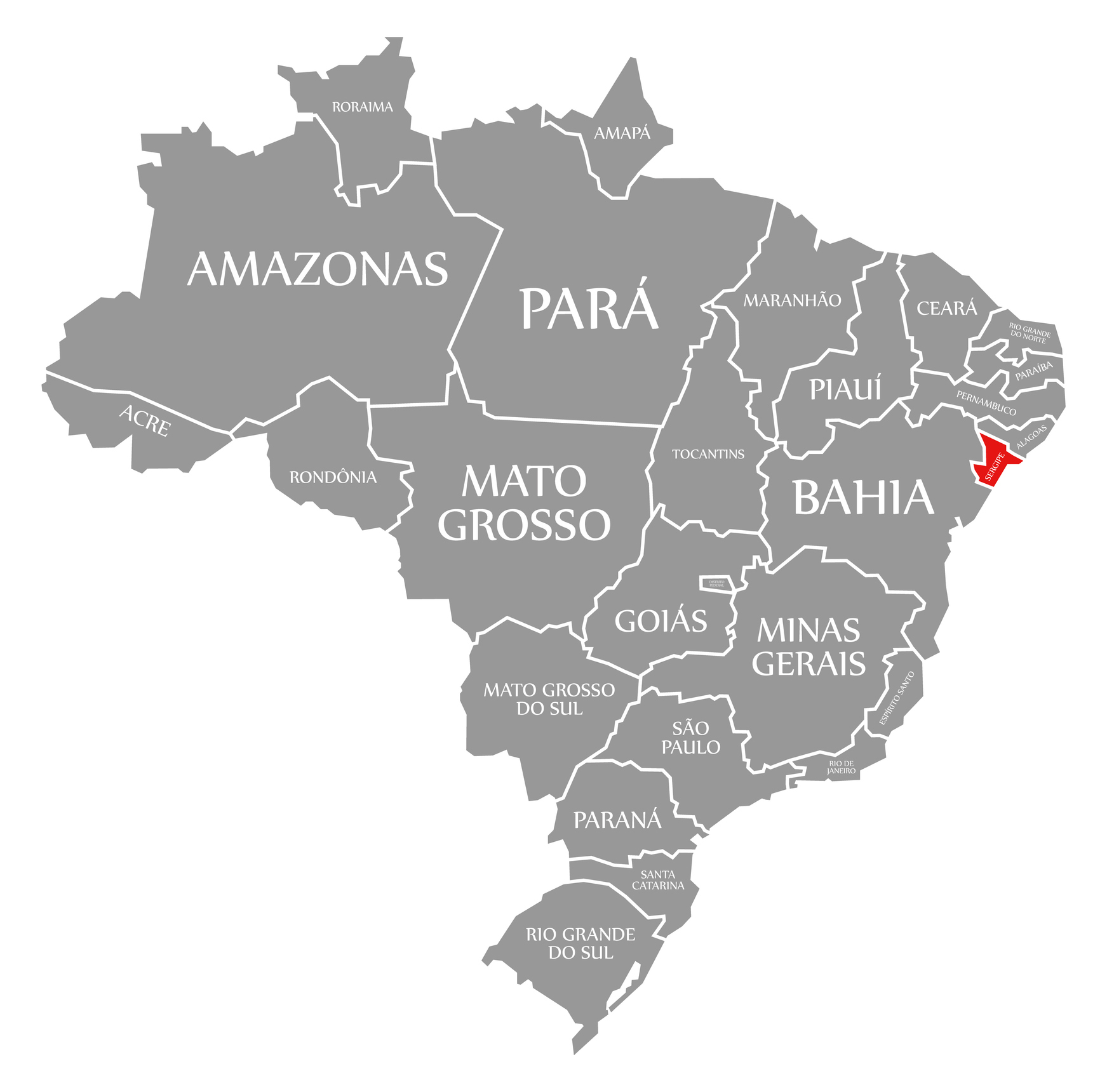 Fortunately, the power plant is an agile customer despite its size. Silva says it can go from offline to maximum power in just a few hours. “It’s like a car: Just put in your gas and it’s ready to run.”

If, during a drought, Porto de Sergipe is running at full load, the project could burn its way through as many as 20 LNG cargoes per year. This means an LNG ship could sail into Sergipe every two or three weeks, says Silva. But if Brazil enjoys a wet summer season, the plant could need far fewer deliveries and rely on the floating reservoir instead.

Whatever the weather, Silva says the electricity from Porto de Sergipe will be competitively priced compared to other forms of fossil fuel power generation in Brazil. The price of the LNG has not been disclosed, but long-term agreements for the fuel generally command lower prices because it cuts supplier risk. There was also strong competition to supply gas to the Sergipe project back in 2015, when CELSE won a key auction for power capacity. Porto de Sergipe will be able to ship power to the grid for around $200-250 Brazilian reals per megawatt hour ($49.13-61.41/MWh), which Silva says is approximately four times cheaper than generation from the thermoelectric sector in recent years. “Around 90% of the price is made up of fuel costs,” he says.

But Brazilians can also thank Porto de Sergipe’s record-breaking turbines for their lower electricity bills. The 7HA.02 turbine, part of a platform that’s been recognized for powering the world’s most efficient power plants in France and Japan, will allow it to conserve those precious stocks of LNG. Over several years, Porto de Sergipe’s three turbines will save tens of millions of dollars in fuel costs compared to its peers. “This flexibility, efficiency and low dispatch costs is the reason our national grid operator likes Sergipe,” says Silva. 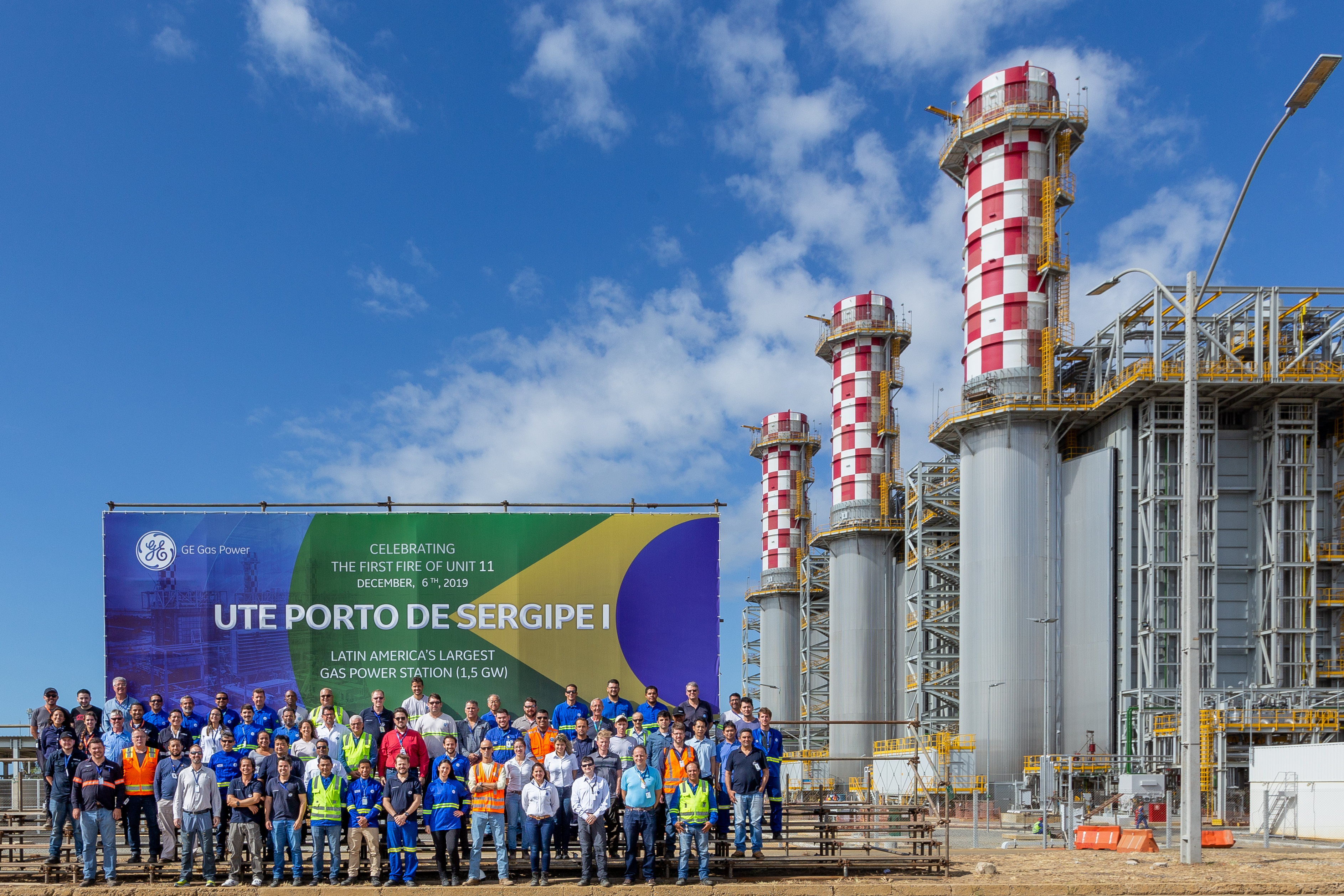 The Porto de Sergipe plant successfully underwent first fire on Dec. 6 and first synchronization on Dec. 16, critical tests where engineers ignited and connected one of the three mighty 7HA.02 gas turbines built by GE to the grid for the first time in Brazil.

But the project is more than three mighty gas turbines. The combined-cycle system of the power plant means that the heat from the exhaust of the turbines is not wasted, but fed into a steam generator where it boils water. The steam then spins another turbine connected to a separate generator. Combining these two thermodynamic cycles — gas and steam — improves the plant’s overall efficiency and reduces fuel costs. Each gas turbine can generate around 320 MW of electricity, with all three operating in parallel yielding nearly 1 GW. The steam turbine has a maximum output of 500 MW. “That total 1,500 MW is huge,” Silva says. “It is in the range of a nuclear power plant.”

Porto de Sergipe can generate enough power to supply the entire Central American country of Nicaragua, and still have over 100 MW in reserve. It will almost certainly wean the northeast off electricity imports from Brazil’s neighboring Northern and Southeastern regions, which currently help keep the lights on in the large cities of Recife, Fortaleza and Salvador.

Silva says the scope and nature of the project were also extraordinary for GE, which built not just the power plant but also the infrastructure needed to ferry the electricity onto the country’s grid: the 34 kilometers of overhead power lines and the 500kv substation that steps up the power into high voltages for long-distance transmission. Usually GE supplies equipment to power projects and provides technical advice, but in Sergipe, Silva says the company procured, engineered and built every single last nut and bolt of the power plant, overhead transmission lines and substation.

The project required engagement with a wide range of stakeholders: thousands of local workers, community leaders, local businesses and government. “We needed to make this beneficial for everyone,” says Silva. A special point of pride? Ensuring that the 3,000-strong labor force, up to 60% of whom were locals, extracted maximum benefit from the power plant’s construction. Silva says GE set up social programs and training centers where workers could learn on the job, and obtain certificates that would serve them well beyond first fire: “For example, we needed qualified welders, so we taught them the trade.”