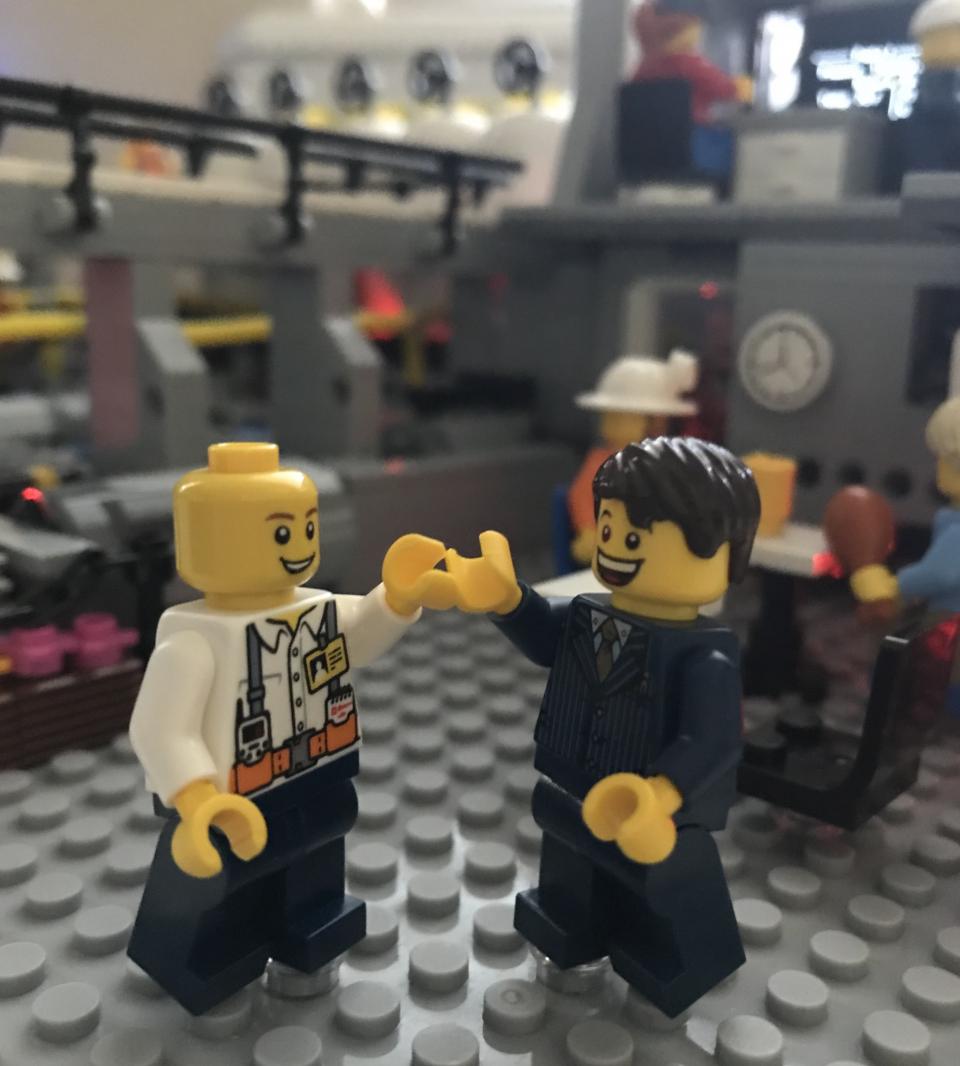 Not long ago, two GE engineers had an idea for a sales pitch — of sorts. Akos Jancsik and Patrick Bean work out of Florida and North Carolina, respectively, and often collaborate to tailor GE software to industrial clients in industries like water treatment and food and beverage manufacturing. The common thread is that most of those factories use similar equipment: pumps, motors, compressors and valves. That equipment yields data that can be harnessed to make plants run more efficiently, but the challenge was explaining how — “data” can be a bit abstract. Jancsik and Bean were seeking a vivid way to make their case.

A full-color brochure? A flashy PowerPoint? Don Draper’s famous “Carousel” monologue? Nope. To think big, the duo went in the opposite direction: Jancsik had a crazy idea — to use Legos, the tiny but iconic Danish building blocks, to create a scale model of the plant, complete with workers and typical data systems. “If you’re not an extremely technical person, you’re not a data scientist, some of it can become a bit mundane. It’s easy to lose the customer,” says Bean. “There’s nothing like a Lego set that’s running, actually turning pumps, to liven that up.”

The toys may be small, but the stakes aren’t. Just like the everyday internet of things can have your fridge alert your phone when the milk is low, the industrial internet of things (IIoT) relies on algorithms to track data points from sensors installed throughout a given factory. Crunching the numbers on things like vibrations, temperature and pressure, IIoT software can find patterns and predict when a part might fail or make recommendations on how to tweak a process so that it’s more efficient. A connected factory can increase efficiency by 20% or speed up new product design.

As a result, machine learning algorithms are becoming the nervous system in many of the world’s factories, treatment plants and energy infrastructure. Jancsik and Bean knew they could help factories operate more efficiently if they could only talk them into upgrading their plants to the IIoT. “These are customers who’ve been looking at the same automation and [human-machine interface] screens for 25 years,” says Bean. “It just sounds very foreign.”

To demonstrate how IIoT software can interpret real-time data and recognize when something isn’t working as it should be, GE already had a scaled-down version of a compressed air plant — essentially a giant pump encased in glass — that had been equipped with sensors and a mechanism for simulating a multitude of potential issues and solutions. But it was housed at GE Digital’s headquarters in San Ramon, California, and, at 250 pounds, wasn’t particularly portable: Customers had to fly to the Bay Area to see it. 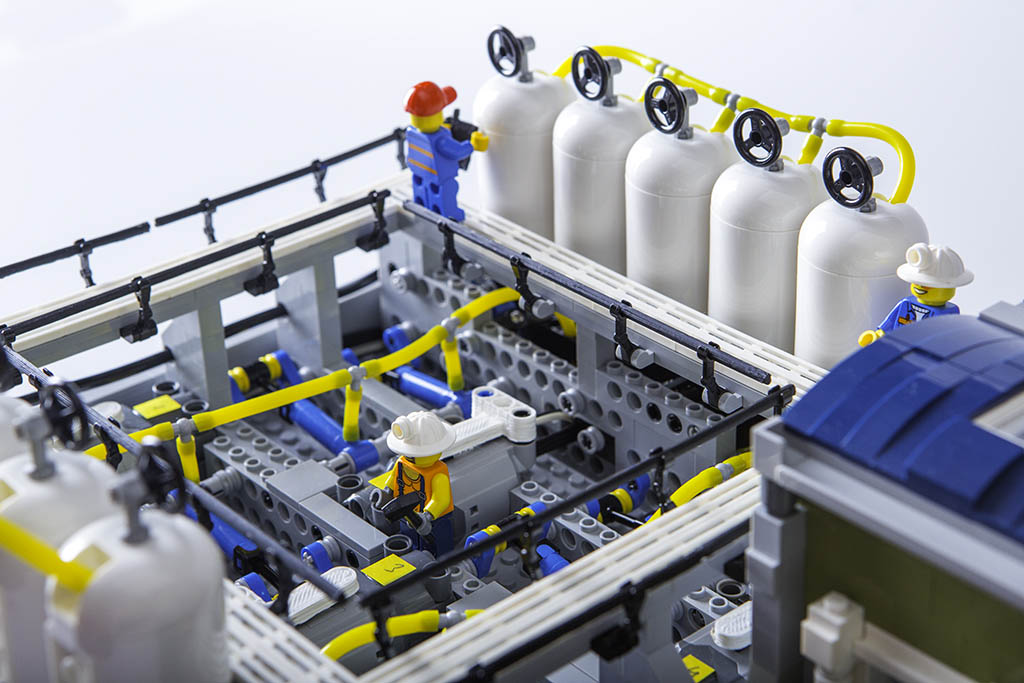 With a Lego replica, though, Jancsik and Bean could take the show on the road. Jancsik, who was born in Hungary and has been with GE for 23 years, recalls wanting to build a humanlike robot at the age of 9, a quest that led him to study mechanical and electrical engineering and computer science. Drawing on his love of Legos, he scoured kits to get the parts he needed and used cheap, off-the-shelf electronic sensors that measure current, revolutions, temperature and pressure to monitor his mini factory.

To get the data into GE’s industrial software, he built a software controller — something any factory that’s measuring its operations would have in place already, but which didn’t exist for his Lego creation. Perhaps the toughest step was building a digital display to simulate what typical factory and plant managers see in their control rooms. It required Jancsik to write software code to translate the sensor data into a series of blinking LED lights.

Small enough to fit on a lunch tray, the finished product nonetheless captures the pumps’ cycles, the motors’ temperature and the air tanks’ pressure. The model, for example, simulates a bearing failure — where corrosion, heat or friction have worn down a key component — by having a small Lego piece act as a brake on the motor. The data coming out displays on the control dashboard in the Lego factory itself, as well as on Jancsik’s and Bean’s laptops, where they show customers how GE’s software interprets the failure in terms of numbers that can be applied going forward to warn that a failure might be coming. “I wanted to make sure we have real hardware that we can run and real instruments, real data with noise,” says Jancsik.

In fact, after building a half-dozen copies of the miniature plant, Bean and Jancsik found that their Lego models performed ever so slightly differently in various GE and client offices due to minute variations in air pressure and other environmental factors. Those variations were large enough to force GE’s IIoT software to relearn how to make predictions based on the ambient environment — which itself provided an illustration to industrial owners of how the algorithms in GE’s software can scale across different operations within one company.

Customers loved it. Before the pandemic restricted business travel, the Legos were a hit at IIoT trade shows, where attendees would snap photos and videos for their kids and then inevitably stick around to learn more about how the analytics work. Jancsik and Bean gave each of their Lego characters in the factory a real-world role so potential customers could make a clear connection to how their job would be affected. It worked so well that one visitor pointed at a character and told Jancsik: “This one’s me.” 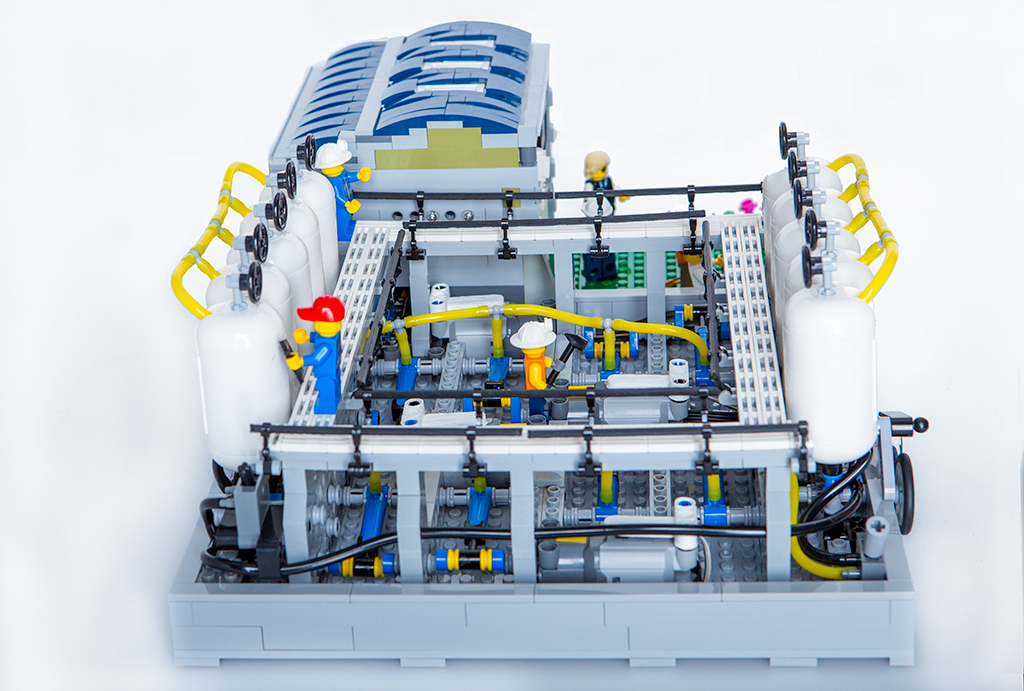 After the success of the pumped air plant, Jancsik and Bean decided to create an even more intricate Lego factory, this one simulating a consumer goods operation like food or beverage packaging with a Rube Goldberg-style apparatus that sorts tiny balls by color and drops them into buckets. Their Lego creations now reside at GE offices in Shanghai, Paris and other major cities around the world, available for video conferences and, when travel resumes, for visits to potential customers’ offices.

Today, Jancsik and Bean have redirected their focus to a new initiative within GE — applied analytic solutions — where they focus on seeking out common, high-value pain points and challenges across their customer base to solve with repeatable solutions using a standard product, and then taking those solutions to market. They say the Lego factories they’re building are the perfect medium to show just how those applied analytic solutions will run in the customer’s production setting.

Bean says seeing the data coming out of the Legos overcame the biggest barrier he’s faced when selling the benefits of IIoT to plant operators: communicating just how powerful the software can be in identifying errors and improving efficiency.

“It’s like sitting in front of a math teacher who’s describing the solution” to a problem, says Bean. “Until you get to solve the first problem on your own, it doesn’t really set in.”