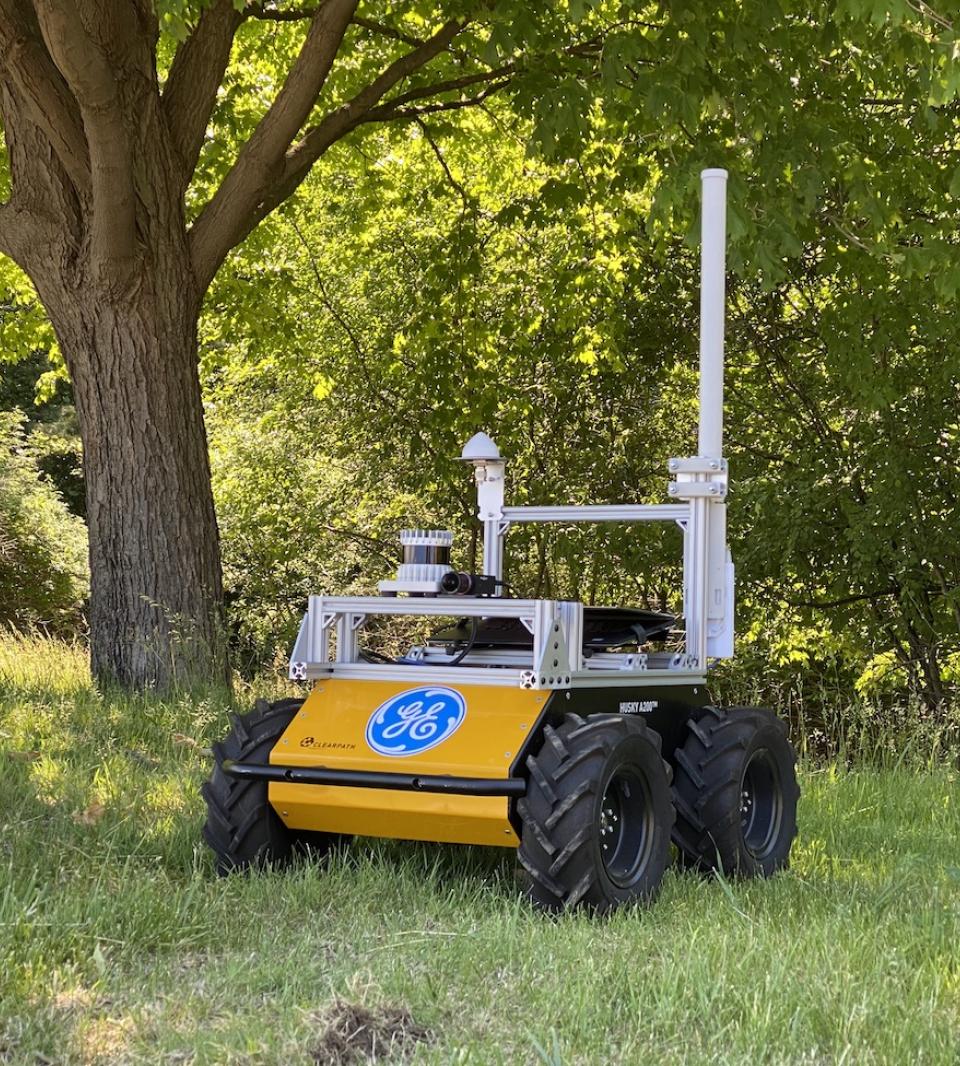 A curious creature crawls steadily through the underbrush in a remote forest. It’s not a badger or bobcat but an autonomous vehicle (AV), an unmanned four-wheeled contraption that looks a bit like a miniature moon buggy. Then the movement halts suddenly, as if the AV has paused for thought. Hidden in the foliage is an impassable obstacle: a fallen oak tree. After a couple of minutes of recalibration, the AV skirts the massive trunk and pushes on.

The self-driving robotic vehicle is the result of a collaboration between the Robotics and Autonomous Systems team at GE Research, in Niskayuna, New York, and the U.S. Army. The partners teamed up a year ago to develop a risk-aware robot that can navigate safely through complex off-road terrain. The machine, which is nicknamed “ATVer,” has become an expert at avoiding jeopardy because it harnesses “humble” artificial intelligence, a set of algorithms developed by GE that allow a machine to exercise caution in unfamiliar situations.

Back to our fallen tree in the middle of the forest: “Humble AI technology allows ATVer to avoid the log, because it doesn’t have enough information about it,” says Shiraj Sen, a senior robotics scientist at GE Research. Circumventing the log is a wise decision. “If it tried to climb over,” he adds, “it might get stuck or tip over.”

Sen knows a thing or two about rugged landscapes. Before joining GE in 2014, he worked with NASA to develop robots that could one day build habitat modules and other infrastructure on the moon or Mars, in advance of human missions. His designs won second place in NASA’s prestigious Space Robotics Challenge. “We showed a system that can perform many of these tasks with very limited human guidance,” he says.

These days, Sen is fully focused on developing unmanned vehicles for use back on Earth. Over the past seven years at GE, he’s worked on an array of drones and robots that inspect energy industry assets, such as pipelines, turbines and exhaust stacks.

The U.S. Department of Defense (DoD) has long been interested in unmanned machines that can ease the burden on soldiers. The Army deployed thousands of unmanned ground vehicles in Iraq to defuse improvised explosive devices. And in 2004 the DoD launched the DARPA Grand Challenge, a competition for AVs held in the Mojave Desert along a 150-mile stretch of Interstate 15.

Most of the AVs in that inaugural Grand Challenge relied on radar, lidar, sonar and global positioning systems (GPS) to plot a path along the dusty road. Although none of them made it across that first finish line, AV technology has made huge strides over the past 17 years. Engineers have beefed up the sensing and satellite systems in AV computers with sophisticated AI algorithms, giving AVs high-level understanding of their environment through digital imagery. These advances in AI allowed Waymo, a subsidiary of Alphabet, Google’s parent company, to roll out the world’s first robotaxi service in Phoenix in October 2020, which continues to operate successfully, despite low ridership so far.

But because of the rough terrain the military often traverses, it has to adapt, rather than just adopt, that state-of-the-art commercial AV technology. Commercial technology often relies on “well-structured” environments, Sen explains, that harness high-definition maps and mountains of data about infrastructure such as roads, traffic signs and buildings. Sometimes “there are no roads where the military go,” he adds. “They tend to operate in unstructured environments.”

GE Research’s project, which is called the Scalable Adaptive Resilient Autonomy Program (SARA), aims to solve this problem. Just like commercial AV technology, the ATVer is designed to harness computer vision and machine learning, with engineers training it to recognize objects it’s likely to encounter — such as trees and bushes, instead of roads and buildings.

When it’s out on a mission, ATVer compares obstacles in its path with tens of thousands of examples in its memory. “It’s seeing if it can justify identifying the object as a tree, bush or grass based on what it has already seen,” explains Sen. If ATVer can identify grass with high certainty, then its neural networks — the systems that allow it to act — will make a decision: Plow ahead.

But if ATVer “can’t recognize the object based on its prior data, then it won’t take a risk,” says Sen. Instead, it stops in its tracks to gather more data. If the new information is still insufficient to breach the predetermined threshold of recognizability, it kicks into the “humble” mode — executing a low-risk action, or alerting a human that it needs help. Bingo: a roving robot that exercises an abundance of humility and caution, just like a soldier out on patrol.

This doesn’t mean that ATVer is programmed to be timid; the robot just avoids reckless gambles. “We need to build a system that is aware of the effects of its actions,” says Sen. “If its prediction is wrong, it can be catastrophic.”

GE Research engineers have been programming humility into AI for a while. They are exploring humble AI applications for wind and gas turbines, researching ways to enable algorithms to ask for help and new data to make decisions whenever they’re stretched beyond their realm of competency. Sen can see the U.S. Army deploying AVs on reconnaissance missions and requesting human assistance only if in potential jeopardy. “Either way, the information can be used later for learning, so the robot gets better and better over time,” he says.

Sen adds, “We haven’t completely solved the problem of fully autonomous systems in unstructured environments. But this project is a step forward towards one day deploying these systems.”