The Rise Of The Hybrids: This Plant Combines Wind And Solar Power To Keep Renewable Electricity Flowing

Dan Juhl was building a wind farm in Woodstock, Minnesota, back in 1998, and he’d hit a snag. He needed to supply electricity to a small office building for the farm’s engineers and operators, but he couldn’t afford the local utility’s fees for hooking the building up to the grid. He could tap the wind turbines, but then how would he keep the lights on through the summer doldrums, when the wind dies down for days or weeks at a time? The solution seemed obvious: use solar panels to complement the wind. “I installed the solar and the wind together with some battery storage to power my building,” Juhl says. “Over the years, I could see that with low-pressure [weather] systems the wind was doing its best, and with high-pressure systems the sun was shining. I was never without power in my building.”

Twenty years later, Juhl is now helping turn that makeshift arrangement into a potential blueprint for renewable power plants in the Midwest and beyond. Juhl Energy Inc., the firm he has run for 35 years, is building what may be the first commercial power plant that integrates wind and solar power to provide a continuous supply of electricity. The plant will generate only 5 megawatts, enough to supply fewer than 4,000 homes. But that small size may be the plant’s biggest asset.

In rural areas, the cost of transmitting power from a big plant to consumers far and wide is relatively high. A small plant, on the other hand, doesn’t cover as much land area and can be more easily placed close to the consumers it serves. Since small plants can be distributed across a large area, they may also be more robust than central power plants in extreme weather. “This is a compact way to produce renewable energy and deliver it to the power system,” Juhl says. 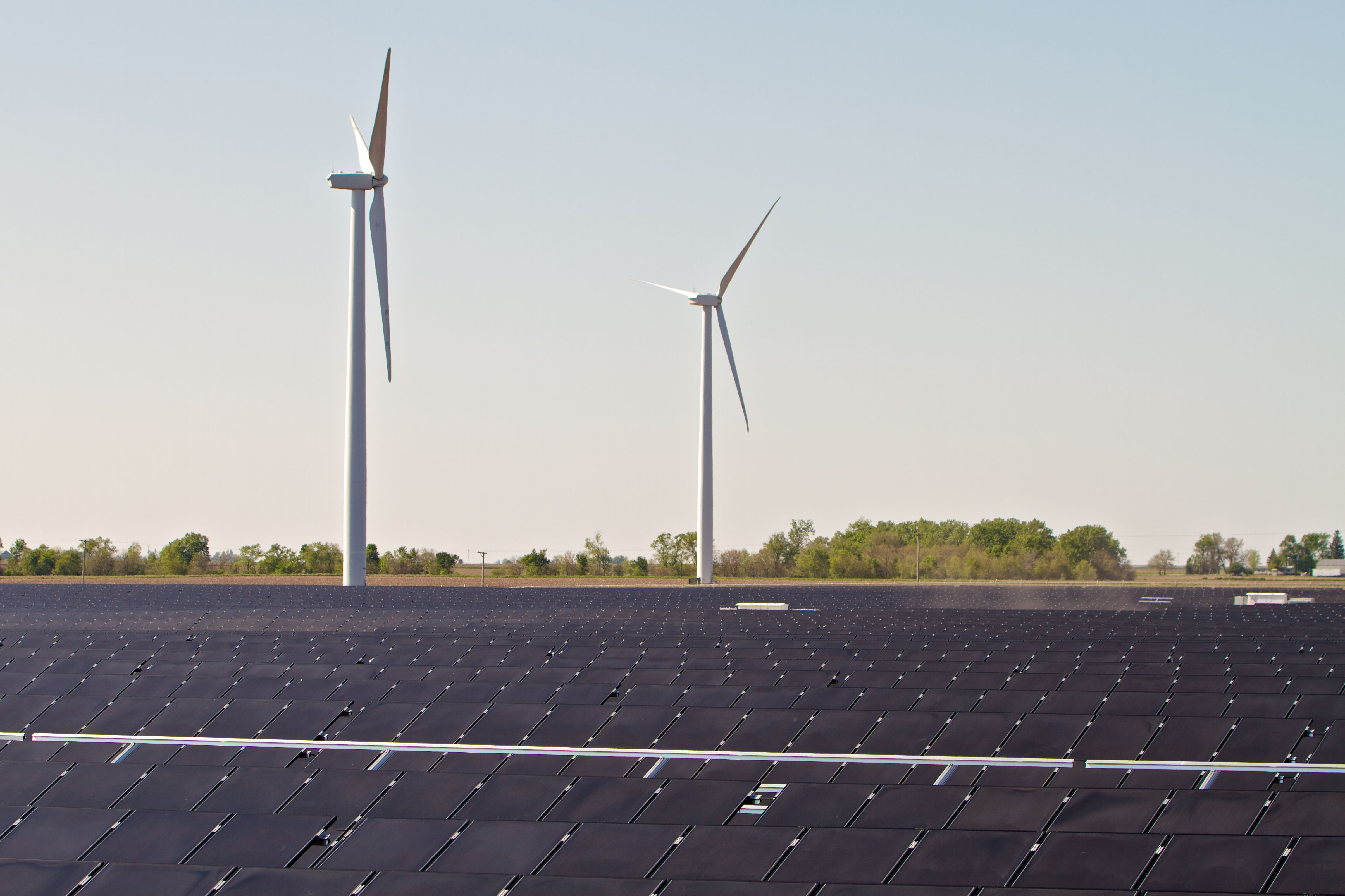 “This is a compact way to produce renewable energy and deliver it to the power system,” says Juhl Energy founder Dan Juhl. Top and above images credit: GE Renewable Energy.


Here’s how it works: When Juhl rigged up his wind-solar combination 20 years ago, he had to include circuitry — mainly convertors that modify direct-current voltage — to merge electrical current from the wind turbines and the solar panels, which tend to have wide swings in voltage due to variability in the amount of sunlight. GE designed a technology called WiSE, for Wind Integrated Solar Energy, expressly for power plants that combine wind with solar. The team created a new interface that can accommodate the direct current directly from solar panels without having to convert it first. The solar panels plug directly into the DC circuitry of the turbines, reducing the equipment needed to integrate solar and wind.

“With GE’s WiSE technology, we eliminated the need for a solar inverter by utilizing the wind turbine’s convertor, so the solar plant routes [power] through the existing transformer, cabling and substation that have been sized for the wind farm,” says explained Amelie Wulff, hybrid sales leader for GE Renewable Energy. She said this set up was “an effective way to use the existing wind infrastructure already in place, to generate firm energy production from solar at a very marginal incremental cost.”

Wind-solar hybrid plants don’t have to be small. Big ones could offer advantages in rapidly growing nations such as India, where power grids are notoriously unreliable and demand exceeds supply in many areas. GE is developing plans for wind-solar hybrids large enough to supply cities.

For example, the company recently completed a proposal for a 175-acre pilot plant that integrates seven GE 2.3-megawatt wind turbines and 25 megawatts of solar panels. The vision is ultimately to build a 1-gigawatt wind-solar hybrid that could serve the burgeoning demand for power in the region around Bangalore. The global market for hybrid power is estimated to reach $1.47 billion by 2024.

“In developing markets like India or the Middle East, we can build a lot of large renewable energy infrastructure, but that comes with long and expensive transmission lines, so we have to make the best use out of it by connecting the most efficient hybridplants to this grid,” Robert says.

Combining wind, solar and storage systems mitigates one of the biggest drawbacks of renewable power: its variability. “Wind is a very good source of power at nighttime,” Tiwari says, while “the sun shines all day. They are very complementary.”