Standing at the windswept mouth of the Port of Rotterdam on Maasvlakte 2, an enormous artificial peninsula that juts like a giant lobster claw into the choppy North Sea, Alex Saldana couldn’t be further away from the throngs of tourists strolling past Holland’s picturesque canals and visiting its renowned museums. But that doesn’t mean he doesn’t have to worry about crowd management.

“It seems like everybody is coming to see us,” Saldana says. “Obviously, you can’t hide what we are doing here.” Not anymore, anyways. Until recently, the land that’s now Maasvlakte 2, which covers an area nearly six times bigger than New York’s Central Park, was off the map. For good reason: It was underwater.

But in 2013, after five years of dredging, Dutch civil engineers opened what is now one of the world’s most modern deepwater shipping terminals. Still, even the giant vessels that regularly load and unload their cargo at the port seem toylike compared to Maasvlakte 2’s latest attraction, which completes this area’s transformation from coastal shelf to soaring engineering achievement: the first Haliade-X, the world’s most powerful offshore wind turbine. The machine’s rotor and 12-megawatt (MW) generator can capture and convert enough wind into electricity to supply 16,000 European homes. “This is the first one, but we hope to see hundreds of them very soon,” says Saldana, the GE engineer in charge of commissioning and testing the prototype. “Being here to see the turbine’s first steps has been very rewarding.”

GE Renewable Energy completed the turbine in the fall, and today the company signed an agreement to sell the electricity generated by the prototype to the sustainable energy company Eneco, which will supply it to customers. The news comes on the heels of a new wind world record: Last week, the Haliade-X became the first wind turbine to produce 262 megawatt-hours of energy in 24 hours. That's  enough energy to power 30,000 households in the area.

The Eneco deal is another big milestone for a machine that just a few years ago existed only on the drawing board. It’s also another notch in the belt for the engineers and workers who designed and built the turbine, which last month made Time magazine’s Best Inventions 2019 list.

The turbine features the world’s largest wind generator, assembled at GE’s plant in Saint-Nazaire, France. GE subsidiary LM Wind Power, the largest maker of wind turbine blades on the planet, built a brand-new factory in Cherbourg, France, to construct the blades for the Haliade-X. At 107 meters each, they’re the world’s longest turbine blades — too big, in fact, to be transported by road. So the LM Wind Power plant is located right next to the Cherbourg port.

The prototype started producing its first electrons in November, and Saldana and his team will spend the next seven months powering through tests to obtain a so-called type certificate, a permit that will allow GE to start supplying the machine to customers in 2021. 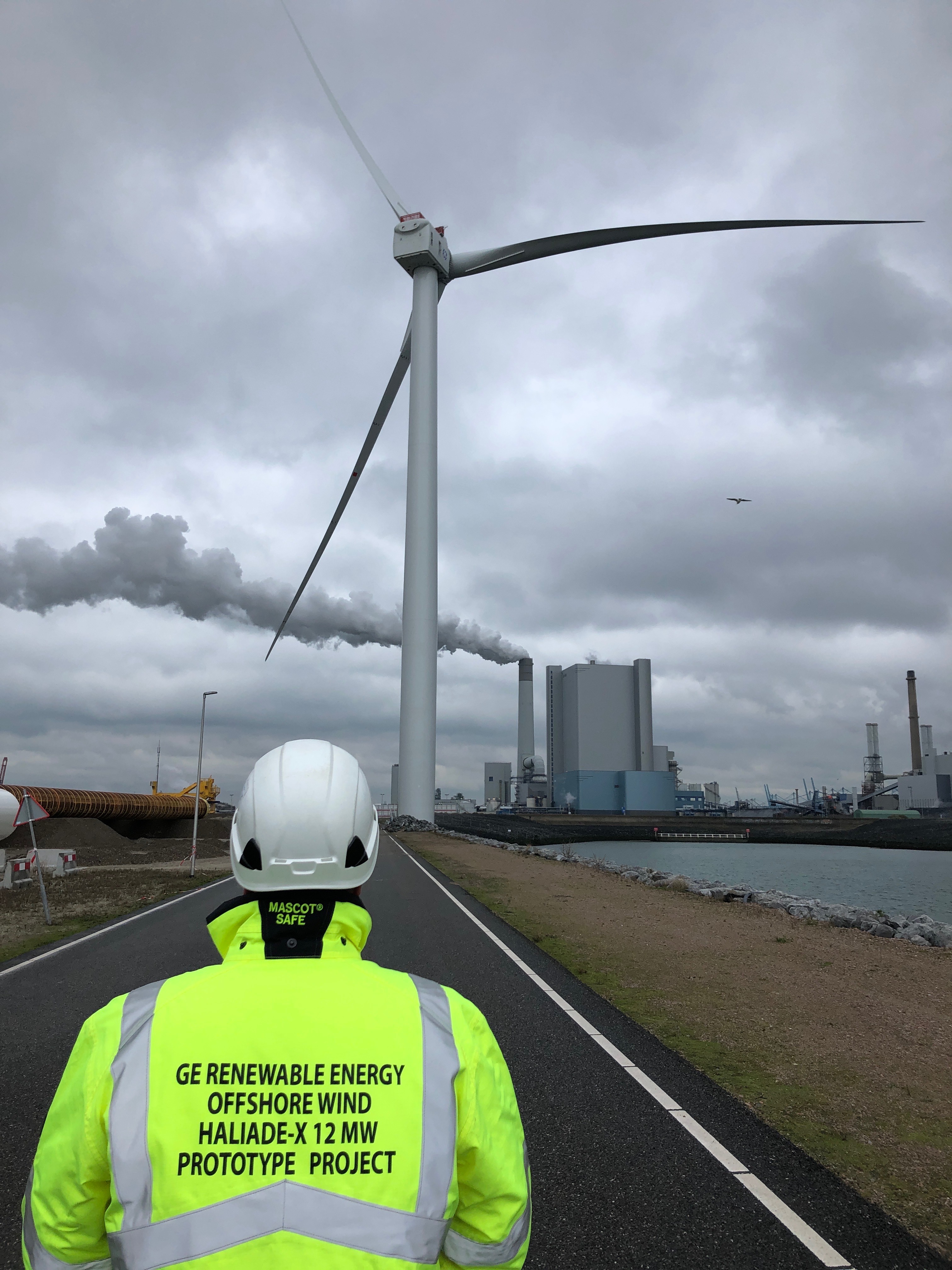 Top: “It seems like everybody is coming to see us,” says GE's Alex Saldana. “Obviously, you can’t hide what we are doing here.”  Above: Last week, the Haliade-X became the first wind turbine to generate electricity at 12 MW for 24 consecutive hours, effectively generating 288 megawatt-hours in a single day. Images credit: Tomas Kellner for GE Reports.

On a recent windy November morning, a minibus filled with customers from an Asian utility pulled up near Saldana’s prefabricated office building a short walk from the turbine’s tower. They watched the machine stir to life, as operators on the ground first pivoted the nacelle holding the generator atop the 150-meter tower into wind along its vertical axis, and then turned the blades to capture the brisk breeze. Saldana and his team were testing a crucial system that controls the pitch of the blades and turns them out of wind to stop the turbine from spinning. “There’s no brake in the wind turbine,” he says. “The blade is like the wing of an airplane, and you have to be able to rotate it out of wind. That’s the safest position.”

Other items on his list include systems that manage the quality of the power the turbine generates, and others that communicate with the grid and monitor conditions on the power network. “We have to make sure that our turbine can detect a voltage drop on the grid and, if it’s not too deep, continue to produce until the conditions on the grid stabilize,” Saldana says. “There are so many wind farms in the North Sea that, if they stopped, you could shut down the north of Germany.”

Saldana and his team are effectively testing the turbine’s operating manual to make sure customers can start generating power as soon as possible. “Unlike a TV manual, the manual we received with the first turbine has some pages blank and some pages written in pencil,” Saldana says. “As we collect information from sensors on the turbine, we sit down with the engineering team, fill out the blanks, update the existing instructions and write the turbine’s story. You need the most experienced people from the company on the team, because this turbine is the first of its kind. We aren’t just following the process — we are making it. That’s why it’s so exciting.”

When it comes to experience, Saldana certainly earned his place on the team. In 2018, he was part of a group that built and commissioned Merkur, a 400-MW wind farm off the coast of Germany that comprises 66 GE Haliade 150-6MW wind turbines. “When we worked on Merkur, what mattered was speed,” he says. “Obviously, you start with safety, but you have a schedule, you have a budget and you go, go, go as fast as you can. Here we need to learn every step we make. Every time we hit a milestone, we need to record the process and collect all the information. If there are any surprises, we go back to engineering, learn from it and improve the product.”

Right now, Saldana’s work may be deliberately slow, but that’s only so the company can go fast in the future. The Global Wind Energy Council projects the offshore wind market to grow from just over 20 GW today to 190 GW in 2030. The International Energy Agency has projected that the total investment in offshore wind could top $1 trillion by 2040.

Says John Lavelle, CEO of Offshore Wind at GE Renewable Energy: “The testing that the prototype will undergo is one part of a multifaceted testing process that will enable us to commercialize the Haliade-X by 2021, just in time for the strong growth uptick we are seeing in offshore wind worldwide.”