About three years ago, Dr. Beth Ripley had a patient in denial. Though Ripley and several other radiologists identified a tumor growing on the woman’s kidney, she refused to believe it — mainly because the treatment, a surgery involving removing her entire kidney, sounded terrifying.

The patient and doctors were at a standstill until a surgeon presented the woman with a model of the cancerous organ Ripley made from a medical scan on a 3D printer. Not only did she instantly grasp her situation, but the surgeon had an epiphany of his own. “He was able to see that he could take out the tumor without removing the entire kidney,” Ripley says.

Now Ripley is bringing such light-bulb moments to the largest medical provider in the United States — Veterans Affairs hospitals. She leads the VA Center for Innovation’s 3D Printing Network Program, which is deploying the technology to VA Puget Sound hospitals in Seattle, San Francisco, Minneapolis, Cleveland and Salt Lake City. The medical provider recently partnered with GE Healthcare to speed up the use of 3D printing in patient care.

Products made by 3D printing, also known as additive manufacturing, are rapidly transforming how doctors approach surgery and other avenues of treatment. According to the Society of Manufacturing Engineering, 96 percent of medical professionals expect to use more additive products down the road, with nearly one quarter of them anticipating 20 percent growth in 2018. They recognize that these products get to the heart of what good medical care is all about: helping doctors communicate clearly to meet their patients’ individual needs. 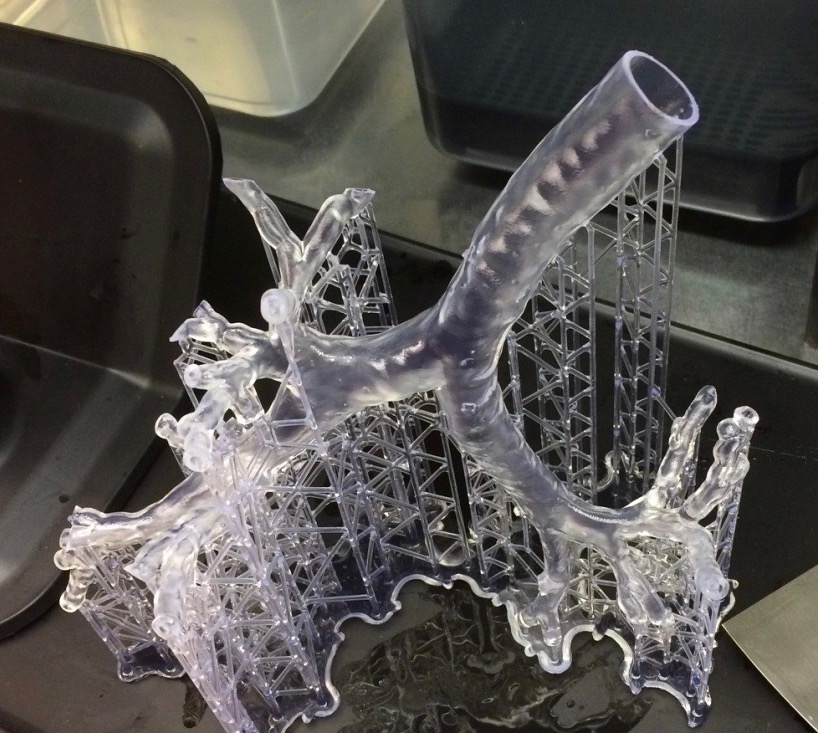 Top: Preparing to 3D print a fistula. Above: 3D-printed models of vessels and other parts of the vascular system. Images credit: GE Healthcare.


This additive revolution reaches beyond the OR. Jimmie Beacham, chief engineer at GE Healthcare in Waukesha, Wisconsin, says that in the future, as much as 70 percent of components for GE Healthcare machines will involve 3D printing in some shape or form.

Back at the hospital, weeks before a patient even arrives in the operating room, surgeons and radiologists get together to map out each step of the surgery. Since much of the outcome depends on how well radiologists explain the patients’ pathology to the surgeons, this is a crucial conversation. “No matter how eloquent you are with words, taking thousands of images and distilling them down into a 300-word report is a real challenge,” Ripley says. When words fail her, she can place a tangible model into the surgeon’s hands. “They can read with their fingers and their eyes and process the information so much faster,” she says.

When patients sit down with doctors to review their diagnoses, medical models act as universal interpreters, like C-3PO in “Star Wars,” and help them visualize what’s wrong. That’s crucial for patients grappling with complicated, life-threatening conditions like brain tumors.

The “printing” of your brain begins with an image from a CT scan. First, a radiologist will comb through the scan to specify what anatomy should be printed. Those edited images are uploaded into a special format, such as STL — short for stereolithography — that calculates surface area so that flat images pop into a third dimension. Finally, the doctor feeds the STL file into the 3D printer that will build your brain layer by layer from plastic feedstock.

Radiologists like Ripley typically make their own additive products on-site. This cottage-industry approach allows sprawling medical organizations to tailor products to each patient, even when the 3D-printing application extends beyond their body parts. They can create customized aids for patients, like when the VA in Richmond, Virginia, helped a veteran whose brain injury made it hard for him to play pool — by creating a device that prevented his stick from shaking when he cued up. Doctors also have the freedom to create models to perfect their personal innovations.

Advocates like Ripley want to expand 3D printing even further into medical practices. They are working closely with organizations like the Food and Drug Administration and the Radiological Society of North America to hammer out production standards and best practices. They are also developing training programs to create a field of 3D-printing professionals. Ripley, who majored in art history before she went on to become a radiologist, says the perfect candidate for a career in 3D printing would be someone “drawn to medicine and beautiful design.” And, in her case, nothing is more beautiful than seeing additive medicine give her patients the care they deserve.