For most people, a half-second delay is something to shrug off. For Steve Reed and Trent Lester, a blip that small might raise a red flag in their safety-focused industry. They work at the Subaru factory in Lafayette, Indiana, the company’s only facility outside of Japan and one of the world’s most advanced automobile plants, where each year more than 6,000 people produce up to 400,000 Legacy, Outback, Impreza, and Ascent models. Reed and Lester collect thousands of data points every second, from the status of air compressors to the amount of antifreeze that’s dispensed into each vehicle. When a vehicle on the line isn’t where it should be, the electric motors that shuttle everything along 17 miles of conveyor belts are smart enough to automatically pause, sometimes so briefly that even the workers monitoring the activity won’t notice it.

But the sensors that Reed and Lester manage will. Even a half-second slowdown will show up as a small bump on a readout graph that the pair carefully scrutinize.

Data is central to Subaru’s success at streamlining a complex process of inventory, assembly, and quality control. And underlying that massive data collection effort is a suite of industrial software developed by GE Digital and designed to enable smarter factories and plants — from auto assembly to pharmaceutical production to food packaging. Even utilities that provide drinking water and treat waste use GE Digital’s software, as does GE’s own aircraft engines business. How GE customers use the information they collect and the actions they take as a result are transforming manufacturing and taking it into the future. 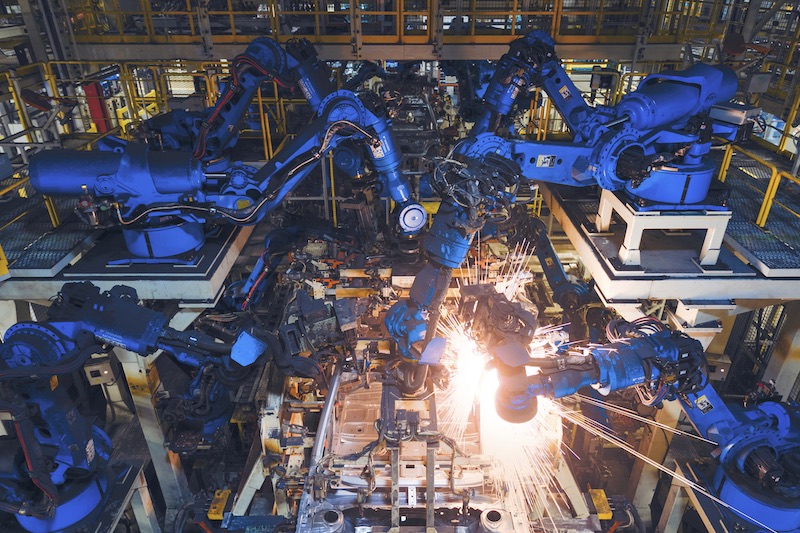 The transformation is often called Industry 4.0, and it refers to the increasingly common practice of embedding sensors in machines that can talk to central software systems. Coupled with cloud computing, data analytics, and artificial intelligence, companies are starting to use the industrial internet of things (IIoT) to target greenhouse gas emissions, for example, or create instantly available records of every part and process that went into making a product, so that service technicians operating years in the future can see exactly what they’re working on.

At Subaru, maintenance, engineering, and environmental teams use the data that Reed and Lester collect to continuously improve production by finding inefficiencies, cutting waste, and ensuring compliance with pollution regulations. In one case, for example, the analysis helped workers streamline production by spotting and resolving an otherwise invisible bottleneck involving installation of the tire-iron-and-jack tool kit destined for each vehicle’s trunk.

GE Digital got its start in 2015, when GE brought together software teams from its many business units that were building applications for the IIoT. In the years since, the group has continued to embed GE Digital products in many industries. Its software serves the world’s electricity grids, helps airlines manage their operations, and provides insights that help utilities reduce greenhouse gas emissions.

Starting in 2024, GE Digital is set to begin a new chapter as part of GE Vernova, one of three companies that will form the next chapter of GE.

The shift comes at a critical time for the world’s manufacturers. Many were still in the process of digitizing their sprawling operations when COVID-19 tangled supply chains just as demand for products as different as cars and cardboard boxes surged. Adding to the challenge: Like their counterparts in the aviation and energy industries, manufacturers now must also reduce their greenhouse gas emissions and help the world decarbonize.

GE’s history digitizing factories goes back many decades. In the 1950s, computer pioneers like Arnold Spielberg, father of the Hollywood director, built for GE some of the first commercial computers, which steel mills, paper mills, and other businesses used to monitor their operations. “I walked through rooms that were so bright, I recall it hurting my eyes,” Steven Spielberg said, sharing with GE Reports a memory about visiting the factory where his father worked. “Dad explained how his computer was expected to perform, but the language of computer science in those days was like Greek to me. It all seemed very exciting, but it was very much out of my reach until the 1980s, when I realized what pioneers like my dad had created were now the things I could not live without.”

Arnold Spielberg told GE Reports that the first computers he built were data acquisition systems whose job was to monitor defects. “They were a wire-programmed system, which means that they were uniquely designed to do just that job,” he said. “Another computer called GE-312 monitored a turbine for Southern California Edison. We didn’t dare to control it because that required stops and starts, which could have endangered the machine’s life. The function then was just to make sure that it stayed within specified temperature ranges and that all the contacts were opened or closed as prescribed.”

But Moore’s Law, the observation that computer power doubles roughly every two years, also applies to industrial systems, and they evolved with the rest of the field. Donna Izzo, who started with GE 37 years ago as a college intern majoring in computer science and math, recalls factories that were controlled by people monitoring dials. Later, manufacturers collected digital data, but often they just stored it away, maybe to look at later. Now factories can use that data in real time to adjust how production happens.

Izzo, who now oversees business operations for GE Digital’s manufacturing practice, says that over the years GE shifted from producing custom hardware and software to a more off-the-shelf suite of software products, targeted at specific industries like automobiles. She says that GE Digital’s customers also want to use data to predict problems and trends before they occur. “I think the point we’re at now is, ‘How do we use data to predict, how do we use it to improve?’” Izzo says. “We’re using it to be more proactive than reactive.”

Using software to identify opportunities to reduce emissions and use of water, gas, electricity, and steam is one example. Prasad Pai, who works with GE Digital customers in his role as senior director of product management, says that sensors on factory equipment can monitor how many resources they use. GE’s software is designed to analyze that information to look at usage over time and across sites, says Pai. This could be used by a beer brewer that wanted to see how water and electricity consumption compared for the same product brewed in different seasons at different sites within the company.

One pharmaceutical customer, says Pai, used GE’s predictive Proficy CSense software to figure out that, based on a certain ambient temperature in the plant, they could cut their use of hot water by a quarter during summer months without impacting the yield or quality of the drugs being made. That, in turn, meant using less gas or steam to heat the water and less carbon emitted.

GE knows the benefits of data firsthand. GE Aviation, the world’s largest maker of aircraft engines, avionics, and other systems, is using GE Digital software in its factories. This also shows the breadth of GE’s software portfolios. Many of the processes for making cars and drugs are automated. Jet engines, by contrast, can hold hundreds of thousands of parts and are assembled largely by skilled humans, one part at a time. “It's probably one of the most complex assemblies on planet Earth that’s made on a production line,” says Stuart Thomson, senior director of program management at GE Aviation.

That’s also where an MES, or manufacturing execution system, comes in. Think of an MES as the software equivalent of an Ikea instruction pamphlet that tells the builder what parts they should have, how to assemble the product, and what it should look like at the end. Thomson’s role is to implement and run MES at GE Aviation’s more than 80 facilities worldwide.

That work includes digitizing and standardizing GE Aviation’s so-called “build books,” the written genealogies of everything that went into an assembled aircraft engine and its component modules. Today, while GE Aviation’s build books are digital, they don’t contain the entire history of each part across GE’s vast supply chain all in one place, says Thomson. Creating that “digital thread” will allow workers to trace engine or part history much more efficiently — where and when it was built, any prior work on it, and whether performance metrics have differed from similar ones over time.

That’s particularly valuable because GE doesn’t just build engines but services them for many years. For example, a GE plant in Huntsville, Alabama, makes a strong and lightweight high-tech ceramic material that workers in Asheville, North Carolina, turn into shrouds. The shrouds are fitted onto CFM International’s latest LEAP engines, which power many single-aisle airliners. GE engineers want to be able to look up an engine job and trace the shroud all the way back to where it was made in an instant, says Thomson.

GE Digital’s Richard Kenedi hears similar things from customers all the time, whether they’re still grappling with spreadsheets and paper logs or surprised by what their own data tells them. Many are hiring a new generation of plant worker that expects technology to deliver the information they want instantly.

“There’s just a tremendous amount of pressure on manufacturers today,” says Kenedi, whether it’s to minimize downtime, reduce greenhouse gas emissions or digitize the remaining analog processes. “The beauty of it is that our software is right in the center of it all.”