Oshkosh…B’Gosh? This Fourth-Generation Pilot Is Carrying Special Cargo To The World’s Largest Airshow

Ashley Ringer is not just an early bird, she is a human lark. She gets up just after five, leaves the house less than an hour later and is normally the first person in the office at 6.30 a.m. As a lead engineer in GE Aviation’s Business & General Aviation (B&GA) division in Dayton, Ohio, Ringer likes to start work early. But the dawn starts were a way of life for Ringer long before she began at GE. “The wind is best at that time of the morning, so the flying is good.”

Ringer would know. She is a fourth-generation pilot from a family that has enough aviation stories for an epic American novel. Last Friday, she rose well before sunrise as usual. But this time, she didn’t drive to her office on the banks of the Great Miami River. She headed for her local airport, the starting point for her annual pilgrimage to EAA AirVenture Oshkosh, Wisconsin’s legendary airshow.

True to form, Ringer was thinking ahead and drawing up her flight plan to Oshkosh. She planned to arc around the southern shores of Lake Michigan in her trusty two-seater Cessna 140 before heading north toward Lake Winnebago. “Watch the headwind, get high, let it cruise for good fuel efficiency, make a beeline for Chicago, then head straight for Oshkosh.”

Ringer has lost count of the times she has been to Oshkosh — “it’s either eight or nine” — and she has flown in on her own plane on five occasions. But this will be the first time that she has landed at Oshkosh with special cargo: a baby on board. That’s right: Ringer is five months pregnant, and her due date is Nov. 11. And in case you’re wondering, the bump does not present any cockpit issues. “I’m not sticking out that far yet, so I don’t have to turn sideways,” she laughs. 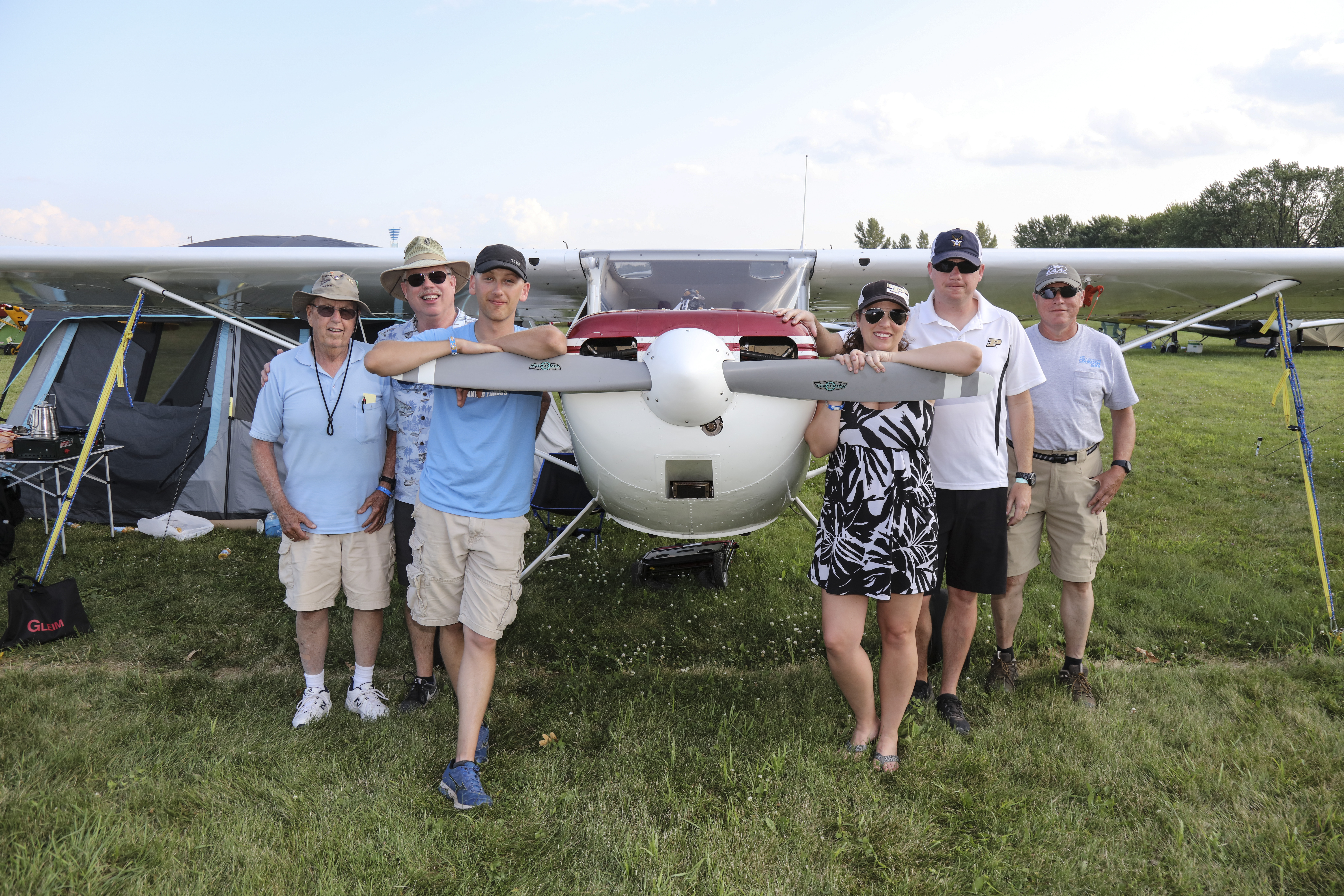 Above: Ashley Ringer, inside her Cessna 140, has lost count of the times she has been to Oshkosh. Top: Ringer, her husband, Trevor, (leaning against the propeller),  and her family in Oshkosh. Images credit: Rob Butler for GE Reports.


She knows that she is expecting a girl, but Ringer did not find that out in the traditional way. After the all-important ultrasound appointment, Ringer passed the results on to her friend in a sealed envelope and headed to the local airport with her husband, Trevor. They were there to watch a fly-past with a twist.

“My friend, who is a pilot, flipped the exhaust and it left a pink trail,” Ringer says. “I was shocked — I thought it was going to be a boy!” So, the key question: Will Ringer’s daughter be the first in a fifth generation of pilots? “She’ll have no choice.”

You could say the same about Ringer, given how steeped her family is in aviation lore. For starters, at least three generations of her family have flown at Oshkosh: Ringer, her father and her grandfather. It might even be four. “I’ve heard that there might be a great-grandfather too, but I need to look into that,” she says.

But there is less doubt about the two grandfathers on her father’s side, who were both flying aces. Her grandpa John flew PBYs, those iconic American seaplanes, in World War II, before he became an engineer. “He designed all kinds of cool gadgets and made stuff, including sensors for the C-130,” she says, referring to the legendary C-130 Hercules, the world’s longest continuously produced military aircraft.

Grandpa Roland, stepdad to Ringer’s father, obtained his license in 1949. He also turned out to be brilliant: He won awards from the Federal Aviation Administration and became a flying instructor. “My dad learned from him,” says Ringer.

Recently Ringer, who’s now five months pregnant, gave a sealed envelope with ultrasound results to a fellow pilot, who let her in on the news via a pink exhaust trail behind his plane: It’s a girl! GIF credit: Ashley Ringer.


With this kind of pedigree, it’s no surprise that Pop ended up an aviator. Ringer’s father now works as an instructor for the Boeing 737 at Southwest Airlines after a long career as a maintenance instructor at United Airlines. However, he began his career as a mechanic and still gives maintenance classes.

“We haven’t even got to my uncles,” jokes the younger Ringer. (One uncle was a superstar Black Hawk pilot; another is currently restoring a Cessna 152.)

Ringer caught the flying bug. She remembers her father lovingly restoring the Cessna 140, the single-engine, light aircraft that has served as her family’s training vehicle for decades. “He rebuilt everything: wings, fabric, instrument panel — I played in it with my brother Shawn when we were kids.”

It is clear that Shawn Noyes, who is 17 months her senior and is now a distinguished pilot with the Air National Guard, has become something of an idol to his sister. “He’s the best damn pilot you will ever meet, but don’t tell him that.” Shawn won every prize going at school and graduated at the top of his class.

But there is also a whiff of healthy sibling rivalry along with the inspiration. Ashley Ringer began flight training at Northwest Regional Airport in Texas at the age of 16 and obtained her private pilot’s license two years later. “I was a little delayed compared to Shawn, but that was only because I took a trip to France,” she laughs. She has now clocked around 250 hours of flying time.

As a child, Ringer also dreamed of being a commercial airline pilot like her dad but changed her mind in her early teens. “I saw United go through a rough time after 9/11,” she says. A career in her family’s other great talent, engineering, began to look more attractive.

She combined her two passions and at Purdue University, Indiana, earning a bachelor’s degree there, as well as a master’s degree in aeronautical and aerospace management. The school is something of a pilot’s paradise. Purdue established the country’s first four-year bachelor's degree in aeronautical engineering technology — which has become a seriously competitive program — and also boasts its own airport. The school earned a reputation for being the “Cradle of Astronauts” in the mid-20th century: Both the first and last people to walk on the moon — Neil Armstrong and Eugene Cernan — are Purdue alumni. 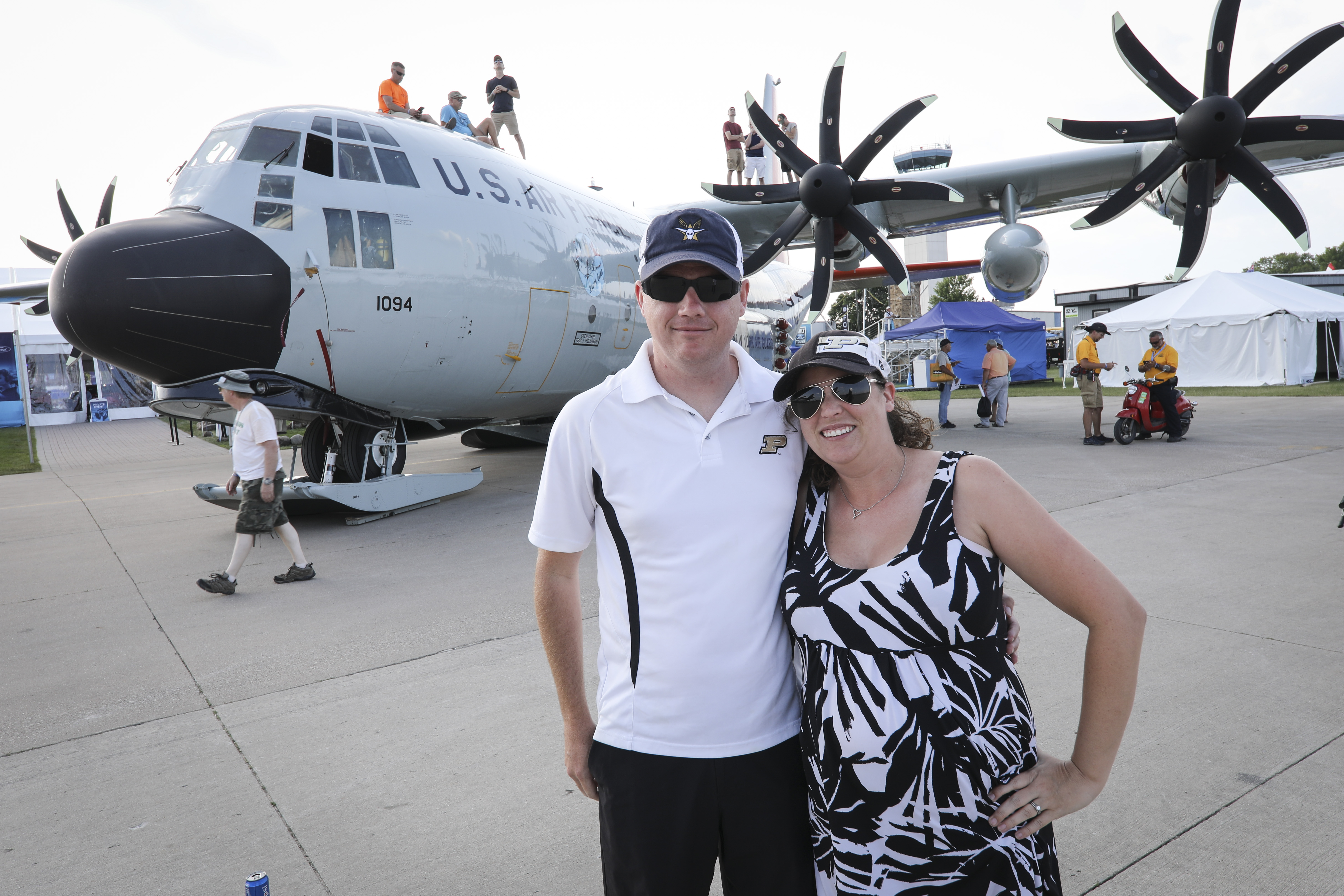 
After a five-year career at Caterpillar, Ringer moved to GE, where she now oversees the design and manufacture of generators, the airborne power plants that use the plane’s jet engines to produce mile-high electricity. Ringer gives GE Reports a fluent 101 on aircraft generation, explaining how alternators convert mechanical energy to the electrical energy that powers everything from an aircraft’s avionics and essential control systems to the coffee machines and entertainment systems.

She then reels off a list of planes that use generators made at her plant: They include the Boeing 777X, the new wide-body passenger jet with the sleek, raptorlike wings, and, yes, the C-130. “Shawn now actually flies C-130s,” says Ringer. “He always says that ‘as long as you designed it, I would test fly it!’ ”

Ringer, who has been with GE for four years, is optimistic about the future. “They’re doing a great job of retaining female engineers, such as giving you the time away that you need for maternity leave.” She and her husband are well prepared for their growing family. She recently flew the Cessna 140 over a plot of land where the couple are building a new home. “Right now, it looks like a giant mud pit, but it should be completed in a month.”

In fact, the two-seater plane seems to be a major character in all the key events of Ringer’s life. She remembers her first date with her husband. “I flew us to and from the restaurant, but he paid for dinner.” It also goes without saying that Ringer flew into her own wedding. She will soon be able to share flying duties with her husband, who begins training this year.

Ringer still flies almost every weekend and sometimes manages some hours before work, even if it is just landing practice. She characterizes herself as a methodical, scientific pilot. “I’m very precise with my flying — my dad always said that he knew exactly how I’d carry out every maneuver,” she says. Shawn Ringer, on the other hand, is more of an artist, explains his sister. “You never knew what he was going to do.”

She is happiest on longer cross-country flights that require some planning. Flying after a winter storm one year is a particularly vivid memory. “I looked down and everywhere was covered in snow — it was beautiful.”

Ringer is looking forward to the four-hour trip to Oshkosh and spending a week among fellow flying junkies. “It’s great when all the crowds leave and only the pilots are left — it’s a really friendly atmosphere.”

But her fondest memory of Oshkosh is not actually about flying, but family. “I remember I was up with Dad,” she says. “He reached his arm around me and gave a hug.”