Mix It Up: Renewable Power Is Rising And This Tech Will Help It Shine

Many countries have set ambitious goals for getting their electricity from renewable sources. Germany, for example, wants to generate 65% of its energy from renewables by 2030. Sweden wants to achieve 100% renewable energy by 2040. Canada, which already gets 67% of its power from renewables thanks to plentiful hydropower, is striving to do the same by 2050.

But hitting those goals isn’t easy — and involves a lot more than just building new wind and solar farms. It also requires building power transmission systems to transport electricity efficiently from remote areas like the North Sea, and storage systems to capture solar power for use at night. And it requires more conventional energy sources, like gas-powered plants, to make sure the lights stay on even when the sun stops shining and the wind stops blowing. GE has been in the power business ever since Thomas Edison helped found the company in 1892, and it remains at the forefront of energy technology today. Here are some examples of how the company is wiring up the renewable age: 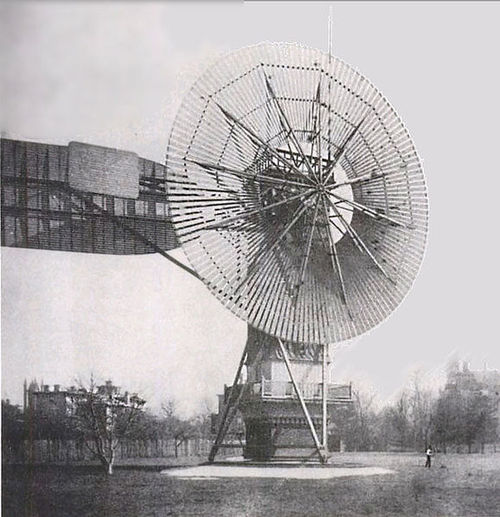 The world’s first wind turbine generated just 12 kilowatts of electricity. Charles Brush built it behind his mansion, in the middle of a 5-acre backyard running along Cleveland’s fashionable Euclid Avenue.

“When the end of the world comes, I want to be in Cincinnati,” Mark Twain once might have quipped, “because it’s always 20 years behind the times.” If it was the future he wanted, Twain might’ve looked to another Ohio city: Cleveland, the home of the world’s first power-generating wind turbine, built by Charles Brush all the way back in 1887. A 4-ton, 60-foot monster with 144 blades and a long, cometlike tail, Brush’s machine generated just 12 kilowatts of electricity — a mere fraction of what today’s turbines are capable of, but a herald of what was to come. You’ve got to start somewhere. Brush merged the electric company with Edison’s business ventures and they later became founding partners of GE. 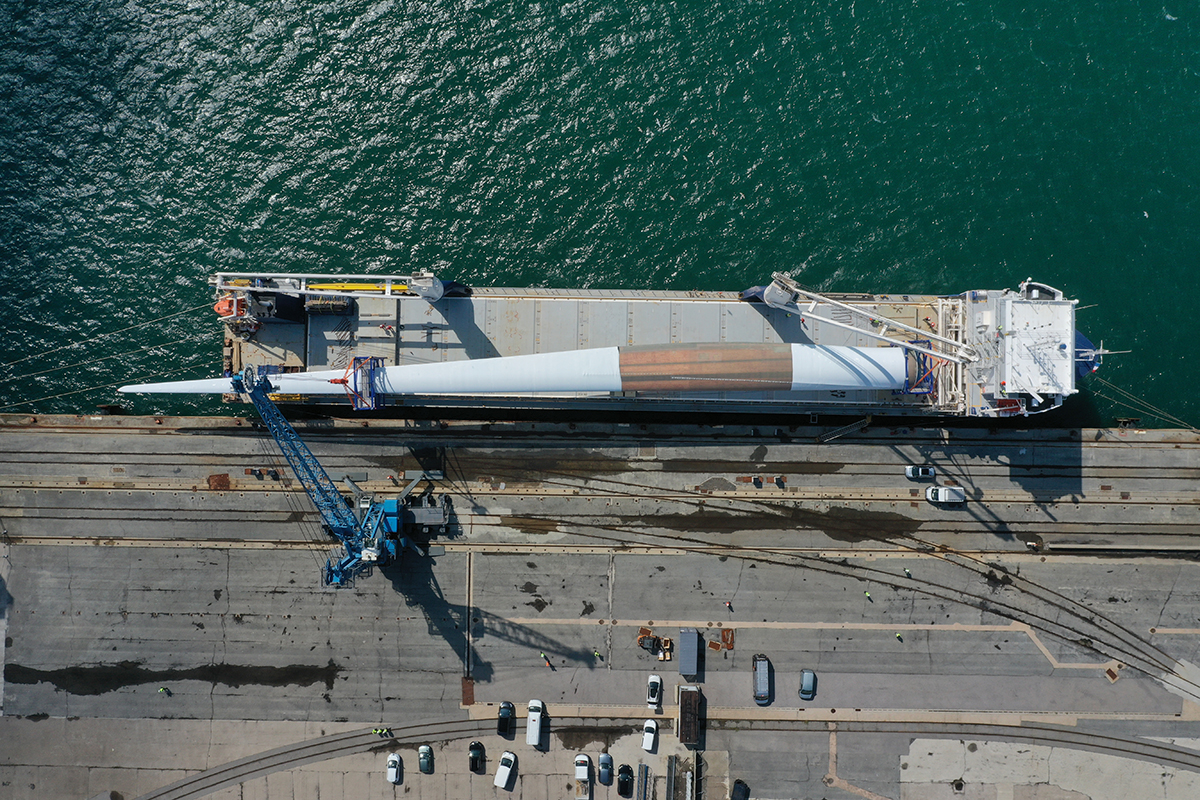 The state of the art of today’s wind turbines is just a bit bigger: GE Renewable Energy’s Haliade-X 12 MW, for instance, achieves its status as the world’s most powerful offshore wind turbine with the help of blades that, at 107 meters, are longer than a professional soccer pitch. The Haliade-X 12 MW is making waves in Europe — where a single machine is capable of generating enough electricity for 16,000 homes — and in the U.S., where the turbine has just been selected for two ambitious new offshore wind projects. The Danish company Ørsted announced it’ll use the Haliade-X 12 MW in a wind farm off the coast of New Jersey: Ocean Wind, which will be capable of generating 1,100 megawatts, the equivalent of an average American nuclear reactor. And Ørsted also has plans for that same turbine off the coast of Maryland, at the Skipjack wind farm, after the deal is finalized. There might be more work on the horizon, too: In the U.S., seven East Coast states have committed to building a total of 20 gigawatts of offshore wind capacity by 2035.

Dry land is fertile soil for planting a wind turbine, too — and GE Renewable Energy also boasts a massive onshore wind turbine. Called the Cypress, the first prototype of this machine put down roots in Holland earlier this year, with a rotor diameter about the length of a midsize New York skyscraper: 158 meters. In July GE Renewable Energy received an order for 27 Cypress wind turbines from the Turkish renewable-energy operator Borusan EnBW Enerji; it’s the first order for the machine in Turkey, where it’ll provide enough capacity to power the equivalent of 190,000 homes. The Cypress’ massive size makes it good for capturing wind, but it’s attractive to power producers for other reasons too: Its three revolutionary blades can be transported and assembled from two pieces, easing installation in areas where space is limited.


When Maintenance Is A Breeze 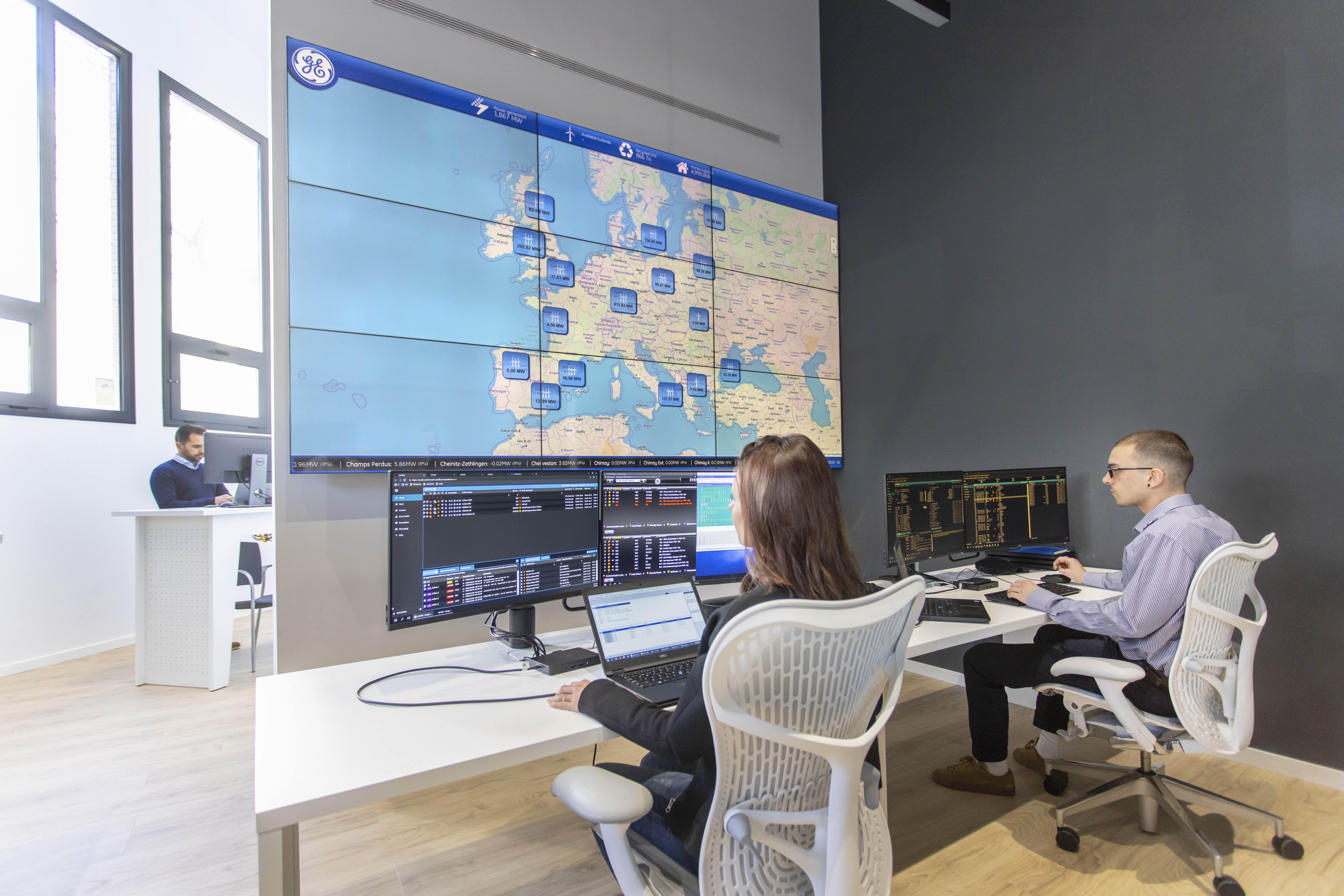 If a turbine spins in an open field and nobody sees it, is it really generating electricity? Well — yes. But it’s still a good idea for somebody to keep an eye on things, not just to stay abreast of minor maintenance issues that can be fixed before they become major maintenance issues, but also to track performance over time and squeeze efficiencies out of every last machine. It’s an even better idea if that monitoring could be done from a central location, where technicians can track many turbines at once. That’s the job of employees at four remote operations centers, or ROCs, that GE Renewable Energy has set up around the globe. At the ROC in Barcelona, for instance, technicians keep tabs on more than 2,000 wind turbines in Spain, France, Italy, Portugal and Greece, continually fine-tuning their operations. The ROCs can solve 80% of wind turbine issues in under 10 minutes; worldwide, they’ve been able to increase the productivity of the energy assets they monitor — including 15,000 offshore and onshore wind turbines, all together — by 20%.


Store It When The Sun Don’t Shine 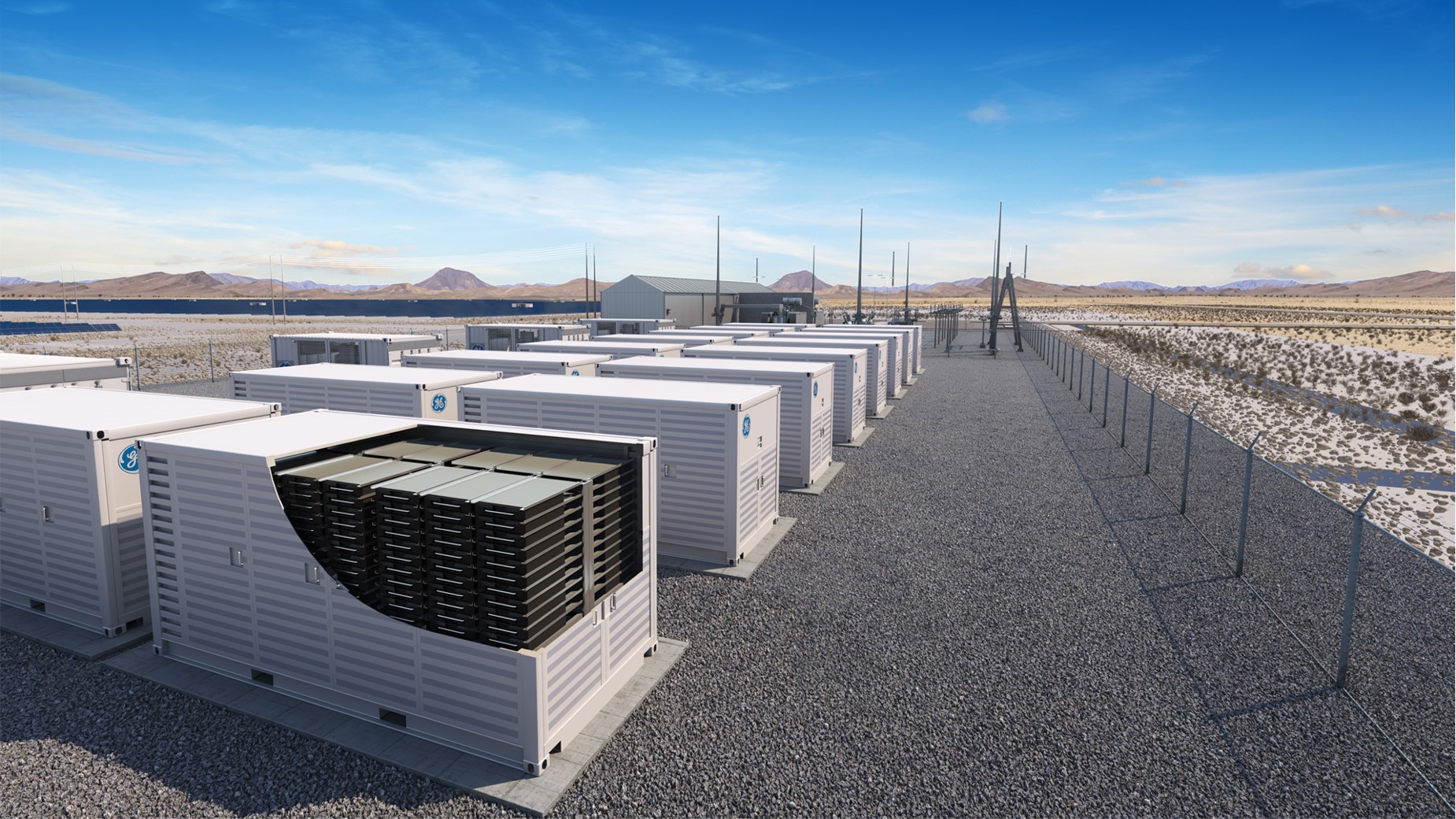 GE’s Renewable Hybrids will link systems like the Reservoir battery, which can store enough to power 145 U.S. homes for a day, to wind and solar technology and the electrical grids they feed into. Image credit: GE Renewable Energy.

A critical part of the rise in renewables is technology that can store power generated when sun and wind are at their peak, and release it later when they’re not — and that means hybrid systems that integrate the generating and storage elements. Recognizing which way the wind is blowing, GE Renewable Energy recently announced the creation of its new business, Renewable Hybrids. This new venture will work with utilities and developers to create these hybrid power networks, which combine renewable energy sources, efficient storage systems like GE’s grid-scale Reservoir battery, and a third key piece: software to make sure that all parties are playing well together. 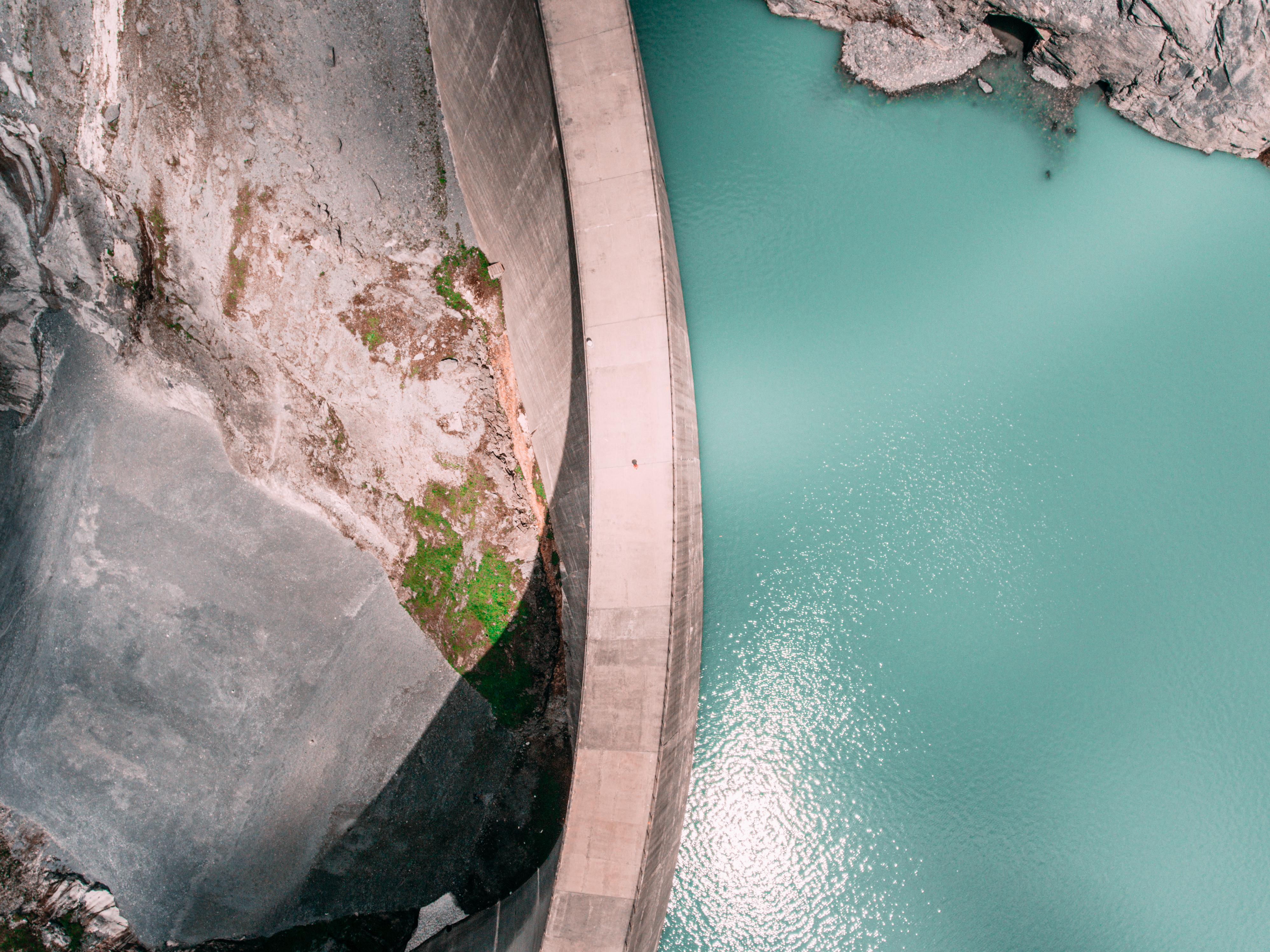 Hydro storage is essentially a giant battery in the shape of a dam. Pumped storage hydroelectric plants require two reservoirs located at two different elevations, linked by tunnels that move water between them. When solar panels and wind turbines are generating electricity to spare, grid operators can use some of that juice to pump water uphill to a high reservoir. Images credit: GE Renewable Energy.

Pumped storage hydropower, or PSH, is elegant in its simplicity — and though it’s not new, it’s freshly relevant as the world seeks new solutions in energy storage. The concept, which is being discussed this week at the WaterPower Canada conference in Montreal, is essentially a giant battery in the shape of a dam, requiring two reservoirs located at different elevations. When solar panels and wind turbines are generating electricity to spare, some of it is used to pump water uphill to the high reservoir. Later, when demand for energy jumps but renewable generation wanes, utility operators can release the water to flow downhill through hydroelectric turbines. The technology is a natural fit for hydroelectric-happy countries like Uruguay, and its expansion in other parts of the world is being explored too: The U.S. Department of Energy recently awarded a $1.25 million grant to a project team from GE Research and GE Energy Consulting to dig deeper into the promise of hydro storage in this country.

Power At A Moment’s Notice

GE’s HA gas turbines have been recognized for powering the world’s most efficient power plants in both the 50- and 60-hertz energy segments. They boast a simpler configuration compared with other gas turbines, meaning they can be installed significantly faster. And they are among the fastest turbines in the energy industry to get to work, reaching full load just 10 minutes after being turned on. Image credit: GE Power.

Water and batteries can help alleviate some of the challenges with solar and wind, but so can gas — specifically gas turbines that ramp up quickly to level out fluctuations in renewable generation. Recently in Ohio, the privately held producer Caithness Energy announced plans to open a 1,875-megawatt power plant that will provide electricity to up to 1.5 million homes using GE Power’s 7HA.02 gas turbines, which — in addition to setting records for efficiency and being relatively quick to install — can reach full load just 10 minutes after being turned on. That kind of nimble operation will be important as gas turbines help ease the integration of wind and solar onto the grid; such is this industry’s promise, in fact, that more than 1,500 GW of operating capacity is expected to be added worldwide by 2040. If this year is any indication, GE Power will have a role to play: The company has inked several deals for its HA turbine in 2019, including in Israel and Taiwan, and earned recognition as a leader in the field by McCoy Power Reports. 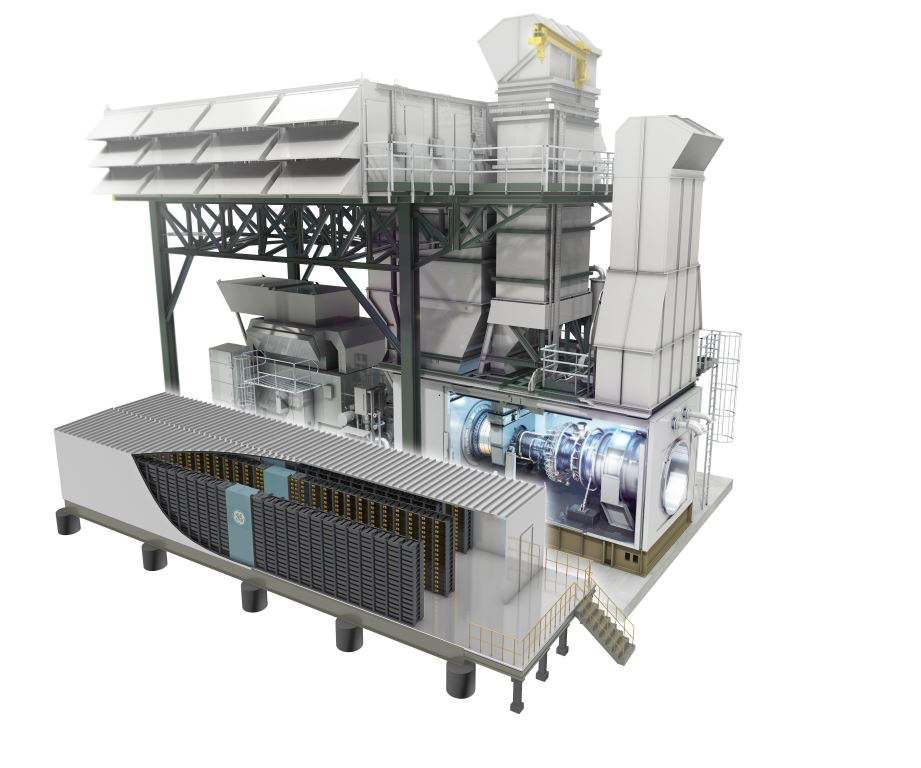 “It’s a hybrid of both worlds,” says Mirko Molinari, general manager for digital grid at Grid Solutions from GE Energy Connections. “The battery is quick and clean, and the turbine is giving you the power you need. It’s reliable power because it’s always there, and you also get the environmental benefits.” Image credit: GE Reports/GE Energy Connections.

Utilities found  another solution to the problem of wind and solar fluctuations: They installed small natural gas turbines called “peakers” next to their renewable arrays and fired them up as needed. But peakers needed time to ramp up, while electricity was needed immediately. So operators kept their peakers running at minimum load at all times — burning fossil fuels in the process. A couple years ago, though, Southern California Edison deployed a different solution. Working with Grid Solutions and Power Services units, it created the world’s first hybrid power plant in Los Angeles, which comprised two parts: gas turbines that could be turned fully off when not in use, and batteries that could jump into action when electricity was needed immediately. The system includes a 10-MW GE battery system that can feed electricity into the grid for 30 minutes, and GE’s LM6000 peaker gas turbine — which can reach 50 MW in about five minutes. It’s a system akin to a hybrid car, where the battery charges off the gas engine and then the two alternate so smoothly that the driver never knows which power source is propelling it down the street. And it’s steering a course toward electricity’s future.


Toward The Renewable Future 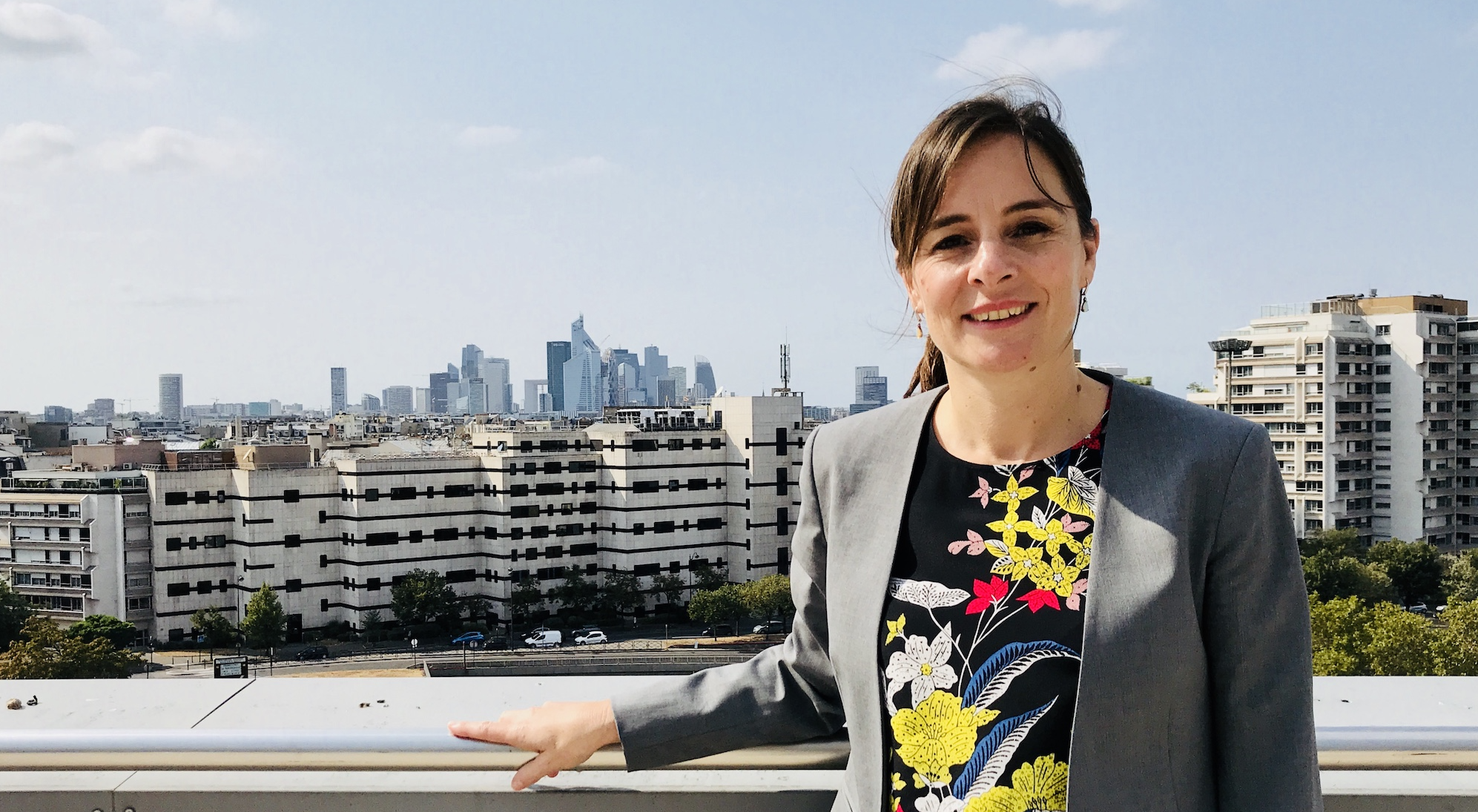 Also steering a course toward electricity’s future? Vera Silva, chief technology officer at GE Grid Solutions, which is now part of GE Renewable Energy. Silva and her team are looking — energetically, you might say — for ways to make the power supply steady, robust and secure, and smoothing the transition of renewable sources onto the world’s electrical grids. Not long ago she sat down with GE Reports to bring us up to speed.

One part of this picture is the path that electricity takes from the generation site — say, a wind turbine in Europe’s North Sea — to a city hundreds of miles away where people want to charge their phones and vacuum the carpet. Showing particular promise is high-voltage direct current, or HVDC — a mode of power transmission discarded early on for technical challenges that have, these days, been addressed. Now, a modern HVDC link can transmit three times as much power over the same transmission line corridor as alternating current. GE Reports visited the facilities in Stafford, England, where Grid Solutions designs, tests and builds some of the most advanced HVDC systems. If the vehicle we’re taking to the renewable future is made of renewable sources and advanced storage technologies, HVDC could be the highway itself. Buckle up.