The mind has a language of its own, and Jeff Ashe is trying to figure out what exactly it is saying.

Ashe and his team at GE Global Research in upstate New York are working with scientists, engineers, and physicians at Brown University to better understand the electrical signals generated by the brain’s neurons. The research could one day yield miniscule implants that could help patients regain lost body functions caused by traumatic brain injury, spinal cord injury, and disease.

“We’re looking at trying to decode the signals the brain sends and receives in controlling limb movement,” Ashe says. “If you can understand the brain’s language, you’ll be able to understand the nature of how one particular disease has affected a certain function.”

Worldwide, there are over 450 million people living with neuropsychiatric and neurodegenerative illnesses. The costs of caring for 14 million Alzheimer’s victims will likely exceed $1 trillion in the US annually over the next 40 years.

Ashe, an electrical engineer, reached out to Brown because of the university’s decades-long experience with brain implants. His team is contributing expertise in microelectronics and non-invasive, wearable and wireless medical devices. “Our sensor designs will be tiny, and they will be able to record the electrical signals coming from the individual neurons,” Ashe says. “Being able to record and separate the signals from the individual neurons, we can then interpret the information the neurons are creating and the functions their circuits should be producing.” 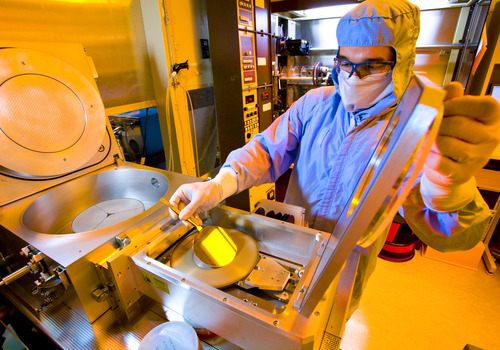 A scientist works with a microelectromechanical systems (MEMS) wafer in the cleanroom at GE Global Research in upstate N.Y.  GE innovations in micro-electronic design and fabrication has led to the development of tiny switches that could be a key component of implantable devices for the brain. Implants could benefit patients suffering from neurodegenerative disease as well as Alzheimer’s, Parkinson’s, and even depression. Image Credit: GE Global Research

Ashe believes that scientists are on the cusp of understanding how groups of neurons work together to control brain function. “We know a lot about individual neurons, how they function and how they carry electrical and chemical signals, but we don’t know how they are all interconnected,” Ashe says.

The team will develop sensors that will allow scientists to record more neurons from more parts of the brain than ever before. They strive to develop a more complete understanding of how the brain communicates and, ultimately, devise improved ways to correct lost function. “We want to take that outside the body via an external device that can mimic these signals and restore motor control,” Ashe says.

GE has been working with universities, hospitals as well as the National Football League to better understand the brain.

For example, GE and the Icahn School of Medicine at Mount Sinai are developing technologies that blend neuroscience with new biomarkers and bio signatures. The objective is to eventually detect underlying cellular changes that lead to degenerative diseases like Alzheimer’s, so diagnoses happen earlier and treatments can be developed more effectively.

In March 2013, GE, the NFL and Under Armour launched a $40 million drive to speed diagnosis and improve treatment for mild traumatic brain injuries. It set aside as much as $20 million for two open innovation challenges. The winners of the first challenge, which looked at improving the diagnosis and prognosis of traumatic brain injuries, were announced in the January 2014. The  winners of the second challenge, who were exploring innovative ways for identifying and preventing brain injury, were announced last month.