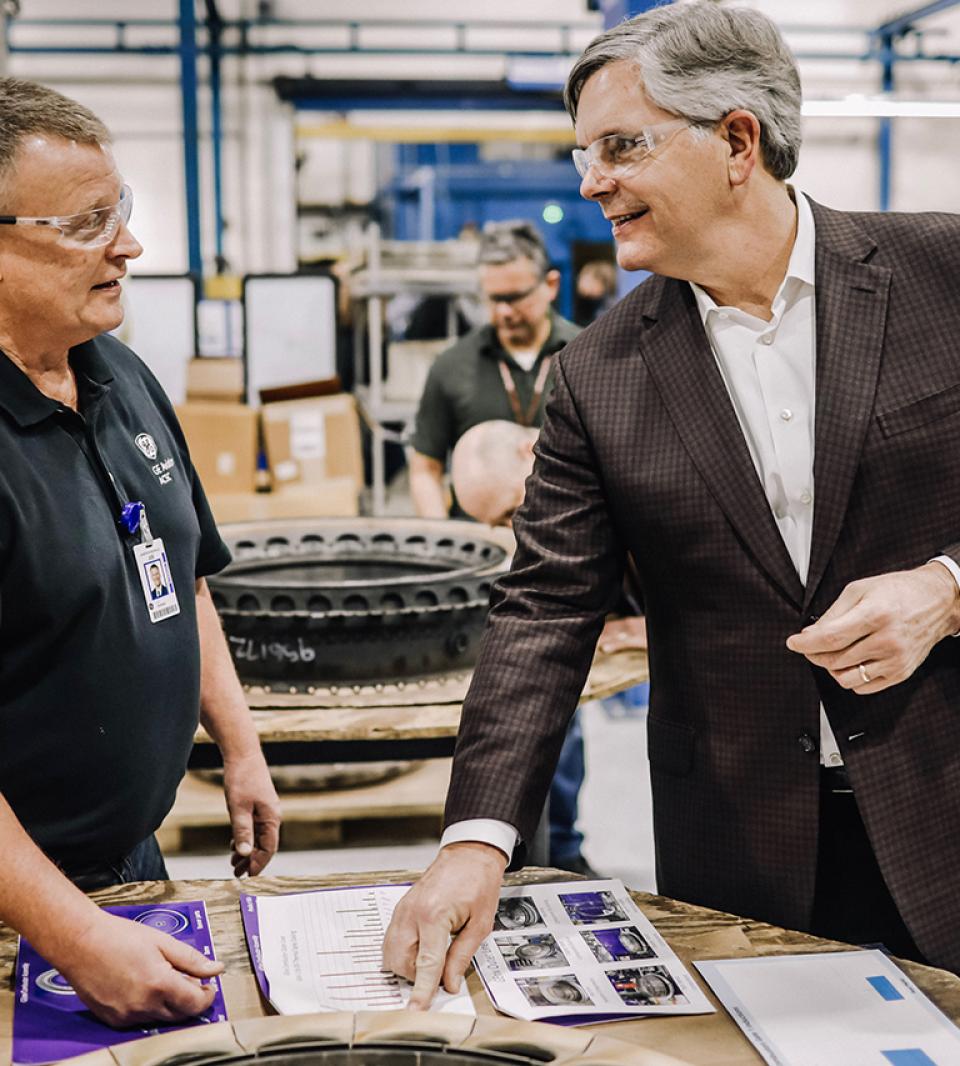 Perhaps the most important initiative Larry Culp announced when he joined GE as chairman and CEO was introducing the concept of lean management and putting it into action. Shortly following his second anniversary in the job, Culp delivered an update on lean, bringing his colleagues and select members of the media up to speed on how GE’s adoption of the management approach has progressed so far. From the get-go, he’s seen lean as a natural fit for GE. “I know of no other way to run a business than through lean principles,” he said.

Like a lot of business management philosophies, lean comes with its own special glossary of terms and ideas, but it can be synthesized into the mother of all principles: continuous improvement. The Japanese word for it is kaizen, and it’s a concept that’s as applicable in an accounting office as it is on the shop floor —work to get better every day. Lean, Culp said, is “more than a set of tools, it’s a way of life.”

Culp first encountered lean in business school three decades ago. But as he started learning it and applying it in his professional career, he realized that he had already experienced many of lean’s important lessons throughout his life. “A lot of the core lean philosophical underpinnings weren’t altogether different from what I remember my junior high school basketball coach telling me: You either get better, or you get worse,” Culp said. “That was his admonition to practice. But it captures pretty well the philosophy of kaizen — continuous improvement. And that’s part of what we want to unleash at GE.”

But rather than presenting lean as a shiny new thing — it is not, it’s been around for several decades — he and his team are rolling lean out in a systematic way. “Some of these words can be overused to the point of being trite,” he said. “What we really want to do is operationalize these ideas so that everyone, from those in the boardroom here in Boston throughout our organization, understands how to put the lean principles to work.”

During his presentation, Culp introduced two lean management experts from within GE to show exactly that. Angie Norman, now senior lean leader for finance at GE Corporate, delivered a crash course on eliminating waste in a GE Aviation production facility in the U.K., where she was stationed until this fall. Some of the lean concepts she described, like “value stream mapping,” are commonly used throughout the company; others, like the lean concept of “pull” — that is, working at the rate of customer demand — are still fairly new. But the proof of the power of lean came in the amount of wasted time and effort her team was able to root out and remedy — reductions in inventory size, cycle time and travel time, as well as a substantial increase in labor productivity. As Norman put it, “Lean is not a short-term fix; it is a long-term journey.”

Betsy Bingham, lean and operations leader with GE Digital, talked in-depth about the importance of what the Japanese call gemba — getting out from behind your desk and walking through a process, whether on the factory floor or on an office whiteboard, to see how production works and where it is breaking down. The key to improvement, she said, is finding the root cause of the problem, coming up with countermeasures to fix the problem, and then rolling out those changes to the process to “standardize and sustain” the fix. Otherwise, you’ll be fixing the same problem over and over again. Bingham noted that by using value stream mapping — a tool that identifies individual steps in the business process and determines whether they add value — and employing new metrics, this helped improve the contribution margin of the Digital Grid unit within GE Digital by 30% from 2019 to 2020.

The questions Culp got from industry reporters ran the gamut: How can lean be applied to innovation? How widely is it being used throughout the company? What challenges lie ahead? And, of course, when can customers and shareholders expect to see lean-derived benefits in GE’s financial statements?

“In the spirit of continuous improvement, what I’ve learned over time and what I’ve seen at GE is, progress allows you to see the next field of opportunity,” Culp said. “When we get on the other side of COVID, when we’re in a more normal operating environment, there’s no doubt in my mind that GE will be a stronger, better performer for our customers and for our investors.”

He went on to add: “When I look at these businesses and the leading technical positions we enjoy around the world — the large, service footprint which represents nearly half of our revenue — there’s no reason we can’t deliver in my view a high single-digit cash yield on this business. That’s not going to happen here in the third quarter, it won’t happen in 2021. But the cumulative effect of what Angie and Betsy have shared with you has that very much within reach. We just need the time to do the work and ultimately prove that out to you and others. And we will.”

Top image: GE CEO Larry Culp during a factory visit. The picture was taken before the pandemic. Image credit: GE