Holding Down The Fort: This Plucky Platoon Has Kept Water Flowing in Algeria During COVID-19

The North African country of Algeria is blessed with natural resources, including 12.2 billion barrels of oil and 4.2 trillion cubic meters of natural gas, most of which are buried deep beneath the broiling sands of the nation’s southern regions. What this mostly desert country is not blessed with, though, is an abundance of water. Like several of its North African and Middle Eastern neighbors, Algeria is always seeking to preserve those scarce reserves.

The new coronavirus, which has brought several of Algeria’s regions to a standstill, is not making that job any easier. One of the country’s biggest fears is an outbreak of the virus among the essential workers who oversee the wells, reservoirs, treatment plants and pumping stations that make up its water distribution system.

But Algerians can count on one cornerstone of their water supply: The Beni-Haroun raw water pumping station, which is located on the south bank of the Beni Haroun reservoir close to Mila, a town that lies 50 kilometers inland from the country’s Mediterranean coast. A skeleton crew of 23 workers have confined themselves to the facility since March 21 and since then, kept its two giant pumps running glitch-free. Their sacrifice will guarantee that 15% of Algeria’s population receives an uninterrupted supply of water for drinking and irrigation throughout the crisis and beyond.

Fodhil Charef, a project director at GE Renewable Energy, which oversees the operations and maintenance (O&M) of the Beni-Haroun station, is proud of his team’s resilience. “These volunteers have stayed on-site, respecting all the procedures such as social distancing to prevent COVID-19 from spreading,” he says. “So far everything is running as per our O&M contract, and nobody on the site is sick.”

Most of the hydro-related project sites in Africa are temporarily closed as a result of COVID-19, but Charef says that they needed to keep Beni-Haroun open. “It provides the equivalent of 6 million people with water on the calculation that everybody consumes 80 liters per day.” That is why GE management, who were tracking the progress of the epidemic through the Mediterranean, moved early to shut the station to the outside world, and minimize the risk of infection. “In mid-March, we saw what was happening in Europe, and we took action,” Charef says.

Forty-eight people normally work at the station; supervisors asked for volunteers who were willing to stay on, and ultimately picked 23. The other staff members left, meaning that the pumping station was officially contained a couple of days before March 22, when Algerian authorities announced widespread lockdown measures in the country.  Nobody has entered or left the Beni-Haroun site since then.

The 23 remaining workers include the site manager, machine operators, supervisors, mechanics, electricians, and security and housekeeping staff among their ranks. Apart from two expatriates, all the workers hail from the local region. Fortunately, says Charef, this skeleton crew is also an elite squad: “Some of the operators and electricians who have stayed behind have many years of experience on this kind of site.” 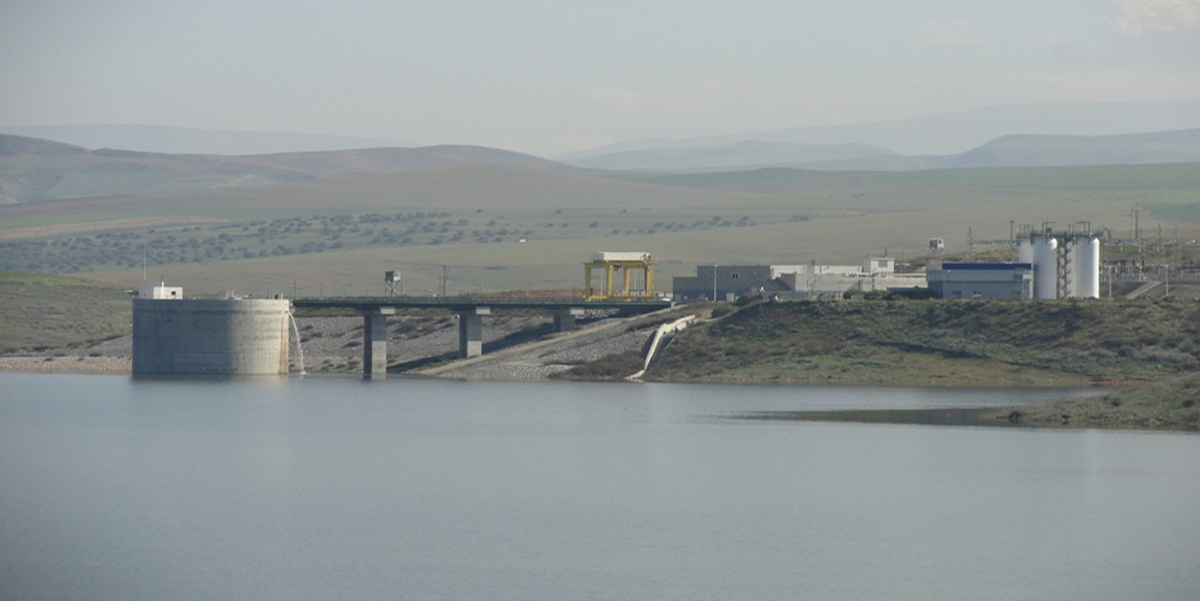 Top: The Beni-Haroun Dam is located at the El-Kebir River, about 19 kilometers downstream from the Beni-Haroun raw water pumping station (above). The pumping station supplies the water to the dam, which reaches the six provinces in Algeria’s eastern region. Image credits: GE Renewable Energy.

Millions of Algerians are depending on those veterans. Without a fully operational pumping station, Charef says, several billion liters of water in the Beni-Haroun dam, which lies 19 kilometers downstream of the pumping station, would never reach the six provinces in Algeria’s eastern regions that depend on the supply. Right now, the priority is drinking water, but the region’s crops will also require irrigation during the long, hot, dry summer months. “It’s a region that produces plenty of wheat as well as olives and vegetables,” adds the project manager.

The Beni-Haroun dam, which has a capacity of 1 trillion liters, impounds water from three rivers in its reservoir. The pumping station has two main parts: an engine room, which consists of two giant electric motors on dry land, and two centrifugal pumps, whose rotors are submerged in the water and gradually pulls water from the reservoir made by the dam. Those rotors create subaquatic tornados that suck up massive volumes of water. In fact, each pump can inhale and expel 11.5 cubic meters of water per second, meaning that the Beni-Haroun station can fill an Olympic-sized swimming pool in well under two minutes.

This workhorse pumps up to 1 billion liters of water per day approximately 800 meters uphill through a specially bored tunnel, where it gushes into a giant mountain-top reservoir. Then, gravity takes over. The water trickles and rushes down from the reservoir in water channels towards the lowland regions. Charef says the water travels up to 160 kilometers to consumption centers.

“In fact, the whole thing works similar to a pumped storage hydro power plant, but only in pumping mode,” explains Thomas Ochs, a lead project manager at GE Renewables, referring to the practice of pumping water to a higher elevation reservoir and then allowing it to rush downhill through giant turbines to generate renewable power. “Instead of the pumps lifting water to generate electricity, the station is consuming power from the grid to pump the water away to the regions,” he says. Ochs explains that each motor uses 90 megawatts (MW) of power, meaning that the total power demand of the pump station is 180 MW, which is similar to the installed capacity of a large hydropower plant.

The setup means that any operational glitches at Beni-Haroun are likely to be related to tripped circuit breakers or defective sensors. The substation steps down high voltages from Algeria’s transmission grid to lower voltages that can safely power the facility’s giant motors. Fortunately, it has been all quiet on the glitch front since March 21. “So far, everything is running smoothly,” says Charef.

The workers might be temporarily shut off from the outside world, but they are living and working comfortably at Beni-Haroun. “We have a camp just inside the enclosure of the pumping station with a canteen, rooms and offices that are regularly cleaned,” says Charef. “They have internet, electricity and food supplied every week, which is left at the entrance to the site.”

Despite the odd creature comfort, Charef is aware that the Beni-Haroun crew are making big sacrifices. Algeria’s lockdown measures are set to stay in place until at least the second week of May. The holy fasting month of Ramadan also began in late April, which is normally a time for spiritual reflection, prayer, and spending time with family and friends. But very soon, the heroes will return.