Hold the Salt: Help Find A Better Way to Drink From the Ocean

Nothing could be more ironic than a giant fresh water aquifer underneath the Sahara desert. Unless, of course, you live in northern Africa. As a result, Algeria and other African countries have started slaking their thirst with desalinated sea water. Other arid nations in the Arab world and Australia have also embraced the technology.

This solution is effective, but it’s also power hungry. Desalination works by pushing salt water pressurized up to 1,000 pounds per square inch through a superfine membrane, which stops the larger salt molecules and lets fresh water through. Because of all that pressure and pumping, energy consumption adds up to 70 percent of the cost of desalination. The process gobbles up globally 75 terawatts of electricity, enough to power almost 7 million homes.

That’s why GE, which has built desalination plants around the world, and Saudi Arabia’s Saudi Aramco, launched a new open innovation challenge to improve the energy efficiency of water desalination. 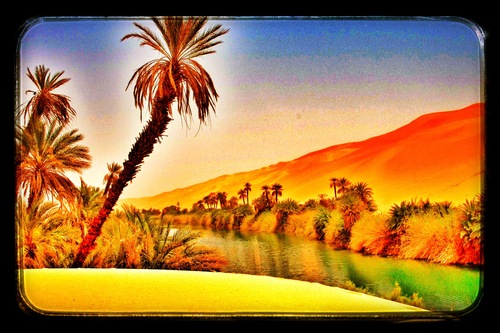 Four winners of the $200,000 challenge will receive $50,000 each and possible further investment to make their ideas commercial. “We hope to inspire scientists, engineers, entrepreneurs and innovators from around the world to bring their talents,“ said Deb Frodl, GE’s global executive director for ecomagination.

The deadline for submissions is July 16. You can find out more at the desalination challenge website.

Top image: If Earth’s water were drained into a single drop, it would measure about 950 miles in diameter. Roughly three percent of that amount is fresh water, and just one-third of that is easily accessible. The GIF was created by Julian Glander. It is based on data from Woods Hole Oceanographic Institution.