The name Spielberg brings to mind a movie magician whose blockbusters changed storytelling forever. But Steven Spielberg isn’t the first disruptor in the family. His father, Arnold, who turns 100 on Monday, helped mold computing — a field whose rise and dominance over all areas of life has no peer in the history of mankind.

Arnold used to design groundbreaking computers for GE in the 1960s. In 2006, he received the IEEE Computer Pioneer Award — one of the industry’s top honors.

Arnold has been interested in machines, radio and electricity ever since he was a boy growing up in Cincinnati, Ohio. He served as a communications chief in a B-25 squadron in World War II and later established himself as an expert in early computer systems. Coming to work at GE in the 1950s, he helped revolutionize computing when he designed the GE-225 mainframe computer. The machine enabled computer researchers at Dartmouth University to develop the BASIC programming language, an easy-to-use coding tool that quickly spread and ushered in the era of personal computers as well as movies driven by computer graphics — a tool mastered by his son.

Last year, we visited with Arnold for a one-on-one interview. Surrounded by photographs with President Barack Obama, Hollywood actors and directors, family and framed patent certificates — he received 12 patents in total — he talked about computers, his love for science fiction and his work on Hollywood blockbusters such as Christopher Nolan’s “Interstellar.” What follows is an edited version of our discussion.

GE Reports: When you started designing computers back in the 1950s, the technology was still very new. How did you choose that line of work?

Arnold Spielberg: I was always interested in electricity. I liked working with magnets, and I liked working with radios. I knew about Edison and Tesla, but not in detail. I got my first crystal radio set when I was 9. It’s basically a diode that can detect radio waves, and I played around with it. But I never could get it working until a radio repairman who lived next door helped me set it up.

GER: What else were you building?

AS: Once I saw an Erector Set in a hardware store. I went inside and asked the owner if I could use it to make a steam shovel and put it in the shop window so they could sell more Erector Sets. He grudgingly agreed and I sat in the back every day after school until it was finished. Later, I brought my mom over and showed her what I built. Sure enough, I got the construction set for Hanukkah. But I was also influenced by science fiction. There were twins in our neighborhood who read one of the first sci-fi magazines, called Astounding Stories of Science and Fact. They gave me one copy, and when I brought it home, I was hooked. The magazine is now called Analog Science Fiction and Fact, and I still get it. 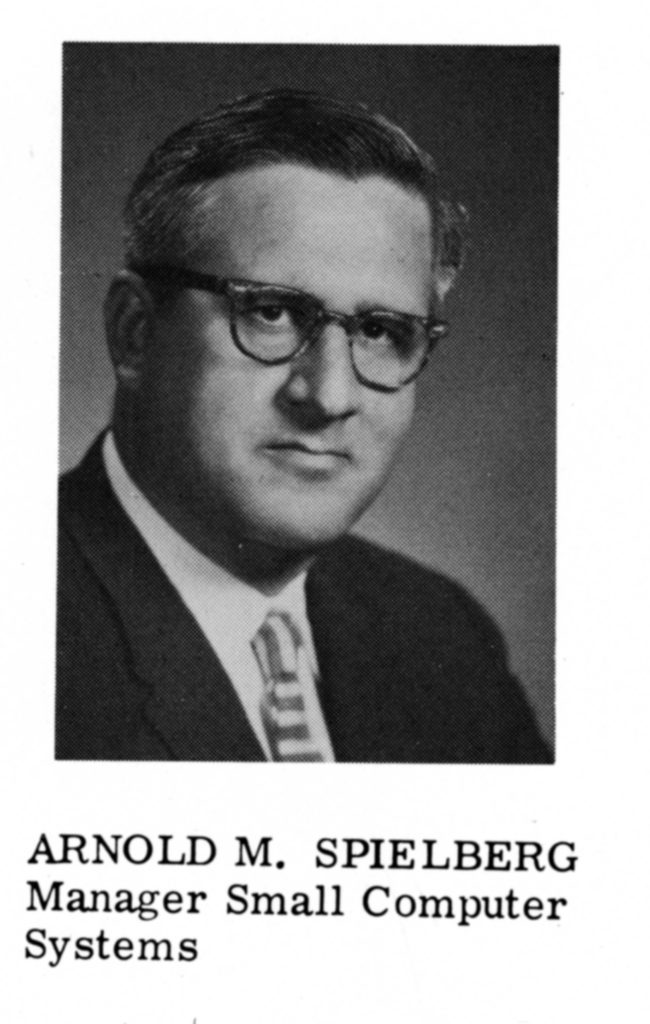 Arnold Spielberg in 1961, when he worked as the manager of GER's Small Computer Systems business. Image credit: Museum of Innovation and Science Schenectady

GER: How did you end up in GE?

AS: I studied electrical engineering at the University of Cincinnati, and I got my degree in 1949. The first job I had was with RCA. I was designing electronic circuits for missile systems. When they started working on computers, I joined that group. After that, I moved to GE.

I joined GE’s computer department in Schenectady, New York, in 1955. My first job was designing circuits for the first computer process controls. The department was just starting. I stayed at the YMCA and visited my family, which was still back in New Jersey, on the weekends.

GER: Who were the computers for?

AS: The first ones were used for the industrial market. Our customers were paper mills and steel mills like Jones and Laughlin Steel Company in Pittsburgh, Youngstown Sheet and Tube in Ohio, and McLouth Steel in Michigan. They were the first customers ever to have a control system for a hot strip mill.

GER: What did the computers do?

AS: The first computers I built were data-acquisition systems. Their job was to monitor defects. They were a wire-programmed system, which means that they were uniquely designed to do just that job. Another computer called GE-312 monitored a turbine for Southern California Edison. We didn’t dare to control it because that required stops and starts, which could have endangered the machine’s life. The function then was just to make sure that it stayed within specified temperature ranges and that all the contacts were opened or closed as prescribed.

GER: Tell me about the computer Dartmouth used to write BASIC.

AS: Unlike the previous computers, the GE-225 — as it was called — was a business computer. It stored its own software, handling the input and output of data. We relocated the factory to Phoenix and sold it within GE as well as to the external market. GE used them for general business applications and some scientific work, but mostly to do business processing. I was in charge of the small-computer-systems group, whose job it was to design the circuits, design the logic, plan the system and put it all together.

GER: How small was this small computer?

AS: The computer consisted of three racks of equipment. Each rack was 2 feet wide and 7 feet tall. There was air conditioning at the bottom of each rack to cool it off because the circuits ran pretty warm. The memory could range from 8,000 to 16,000 20-bit words. It had an auxiliary memory that could go to 32,000 20-bit words. The computer interfaced with magnetic tapes, with punch cards and punch tapes, among other things.

One of our colleagues, Bill Bridge, designed a computer interface for Dartmouth that could transfer information from the computer to dumb terminals. They had no memory and no capability of doing computation. These were just input and output devices with keyboards. People could connect between 15 to 20 terminals to one computer and use that for time sharing. GE was one of the first companies to do time sharing and allow multiple terminals to talk to a computer.

Dartmouth had one of our computers, and they programmed it to develop the computer language BASIC. It allowed people to use the system to solve problems and handle data coming in out of the computer. Steve Wozniak may have used one such remote terminal to write software for Macs. 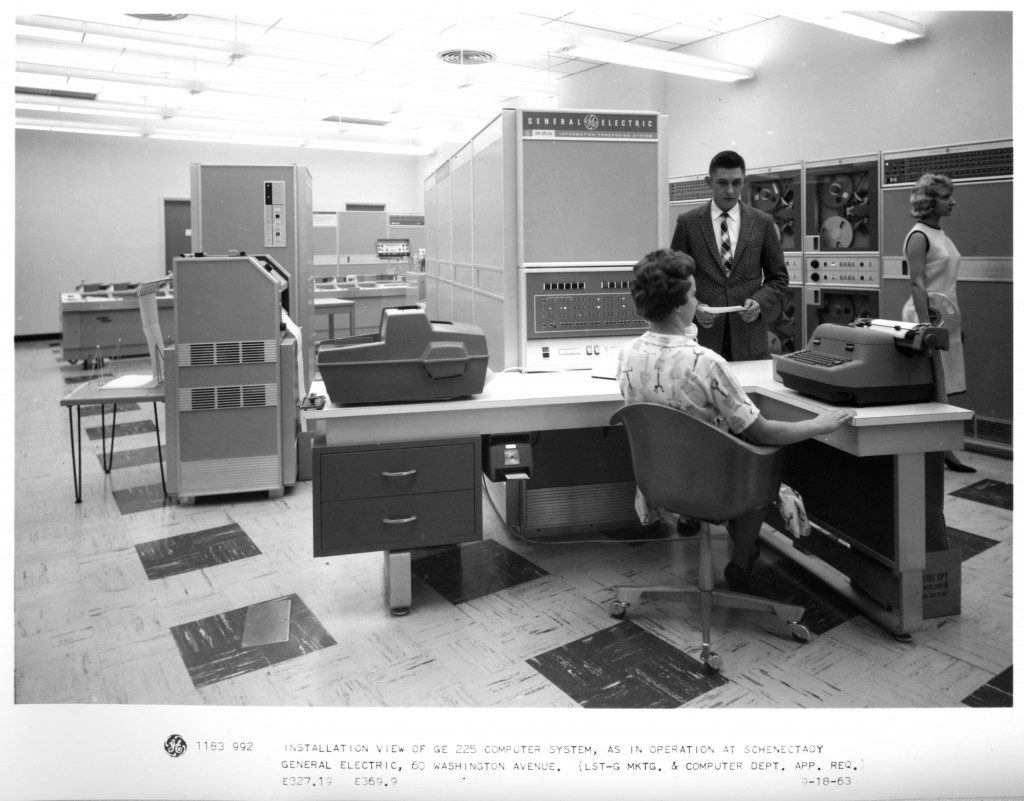 "Dartmouth had one of our computers, and they programmed it to develop the computer language BASIC," Spielberg says. Image credit: Museum of Innovation and Science Schenectady

GER: Did your friends or family understand what you were doing?

AS: Back then I didn’t have that many friends who were interested in computers. It was like a big mystery to them. My son Steven came to visit once, and I showed him the factory and the engineering floor. I tried to get him interested in engineering, but his heart was in movies. At first I was disappointed, but then I saw how good he was in moviemaking.

GER: You were also involved in movies.

AS: I went to Caltech, and met with the astrophysicists Kip Thorne and Lisa Randall and several other scientists, and we sat there and brainstormed ideas about black holes for the movie “Interstellar.” It was a lot of fun because we kicked around all kinds of ideas about the size of black holes and how feasible they are and how likely there actually may be one.

GER: You didn’t turn Steven into an engineer, but he turned you into a moviemaker.

AS: It’s in the family now.