Handled With Care: A 529-Ton Odyssey Through Closed Down Europe Will Help Germany Keep Its Energy Transition In Motion

Like much of Europe and the U.S., Munich was under lockdown in late March. That didn’t stop local residents from opening their windows and taking a closer look at a colossal cargo festooned with a lengthy banner bearing a GE logo and inching its way through the Bavarian metropolis. “Hello, Munich – I am the new turbine, and I am driving the energy transition forward,” the banner said in German, referencing the country’s Energiewende, a project seeking to supply Europe’s largest economy with electricity coming chiefly from renewable sources by 2050.

Getting to that goal won’t be easy. In the absence of grid-scale batteries, Germany and other countries taking a similar journey are relying on power plants to burn cleaner natural gas as a powerful tool to keep the lights on when the wind dies down and the sun stops shining. That’s where the Munich shipment — a gas turbine dispatched by GE Gas Power from Belfort, France, to a power plant near the city’s popular Flaucher Park — comes in.

The turbine — GE calls it 9EMax — can squeeze out up to 15 more megawatts and needs up to 3% less fuel than its predecessors at the Stadtwerke München power station. This upgrade will extend the life of the Munich power plant and enable it to operate while generating less CO2 and nitrous oxide. The turbine and a second just like it, due to arrive in Munich later this month, will form the heart of the plant, providing locals with electricity and heating. They will also allow the plant to take two older turbines offline.

But for the plant to enjoy these benefits, GE had to bring it to them. It’s never an easy task to move a 215-ton machine over 300 miles aboard a 529-ton transport vehicle as long as a football field. The COVID-19 pandemic made that job harder.

For starters, GE had to ensure the safety of the workers and the transport who were making the delivery and still get the turbine to the power plant on time. “Hats off to the team in our Belfort manufacturing facility for maintaining the deadlines, working and prioritizing,” says Robert Colwell, senior product manager with GE Gas Power, “and making sure our deliveries are made on time,” while maintaining a safe working environment and applying social distancing guidelines.

The convoy that departed France was massive, and every step of the journey had to fit together perfectly. “We needed to have the agreement of the civil authorities, and that was hugely complicated,” says Jérôme Romanet, GE’s logistics project manager who oversaw the project. It took the team six months to make sure all local and regional authorities signed off on the transport.

The journey began early in the morning on March 3. Alarming news was already coming out of Italy, but the rest of Europe was still operating largely status quo. The team in Belfort had loaded the gas turbine onto two flatbed trailers with a truck pulling and pushing at each end. The setup gave the transport enough leeway to clear tight corners. Its 42 axles could distribute the weight so that no axle supported more than 12 tons. Any greater load could damage some of the roads and bridges the behemoth had to cross. 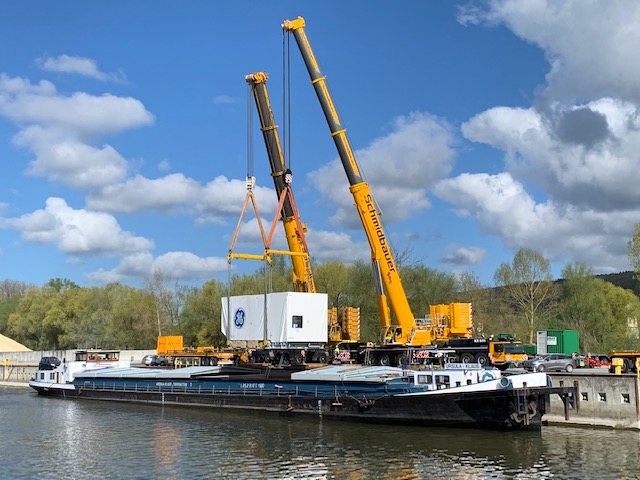 Top image: It took two days to cover a city route in Munich that a car would normally drive in under an hour, as the turbine transport for the GE 9EMax never moved faster than walking speed. Above image: The second unit of the 9EMax is not far behind. It was unloaded this week at Port of Kelheim in Germany on the Danube River. Image credits: GE Gas Power.

By nighttime on its first day of travel, the turbine arrived at the French port of Strasbourg, on the German border, where the team moved it off the trucks and onto a barge. In the following days, it sailed through 48 locks up the Rhine and Main rivers and down the Main-Danube canal toward Munich. The boat ride had to be precisely timed because the Danube closes for shipping channel maintenance every March. Near Munich, the team loaded the turbine back on wheels to take it to its final destination.

That was when the really hard part began. The turbine reached the northern edge of Munich on Wednesday, March 18. By then the city was on lockdown. The original plan was to pass through the city center and cover the last seven miles at night — and the stay-at-home order made that part of the trip easier. Still, Romanet had to quickly solve another challenge: Keep workers at least six feet apart at every possible turn to ensure their safety and comply with the COVID-19 preventive guidelines. 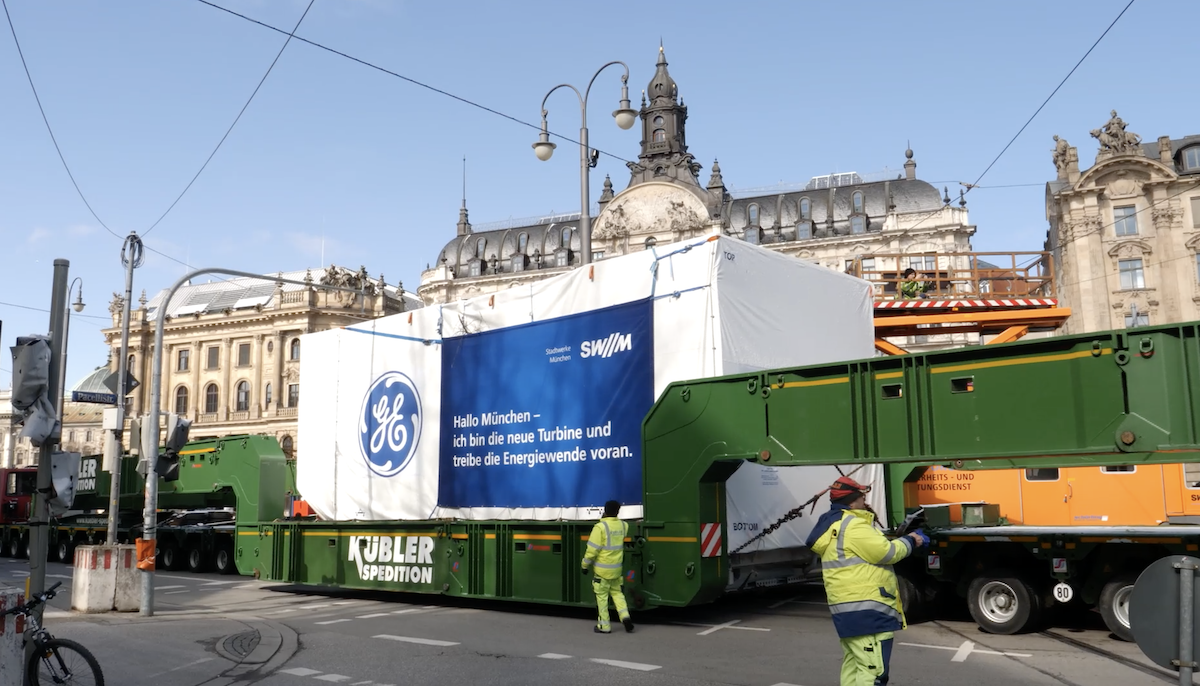 It took two days to cover a route that a car would normally drive in under an hour, as the turbine transport never moved faster than walking speed. The turbine was also accompanied by an escort of a half-dozen police cars in addition to security guards and a surveyor, who helped check out and prepare for every new roadway, intersection and bridge it encountered. The convoy slowed to its most glacial crawl in a narrow 1,000-foot-long highway tunnel just west of the turbine’s final resting spot.

“There was not a lot of space to spare,” Romanet says. “It was very tight.”

When the transport finally reached the power plant, there was no ceremony or celebration. “Due to COVID-19, that was not possible,” Romanet says. Two large cranes removed the turbine from its carrier and began preparing its installation. Because the 9EMax occupies the same footprint as its predecessor, the operator can swap it in without expanding the plant’s building. This was especially important in Munich as the power station is close to the city center.

The second turbine and transport are already on its way, Colwell points out. Right on schedule.