The Blade Runners: This Factory Is 3D Printing Turbine Parts For The World's Largest Jet Engine

The Northern Italian town of Cameri could be easily mistaken for a quiet farming commune. But take a short ride through the rolling fields of the fertile Po Valley that surround it and you’ll discover a startling contrast.
Cameri is the home of the only final assembly plant outside the United States for Lockheed Martin’s F-35B Joint Strike Fighter, a stealthy jet that can take off and land vertically. And just across from the plant’s runway stands another futuristic manufacturing gem: Avio Aero’s 3D-printing factory making sleek turbine blades for the GE9X, the world’s largest jet engine, which took its maiden flight last week.

GE Aviation acquired Avio Aero in 2013 and developed the GE9X engine for Boeing’s next-generation 777X jets. The 3D-printed blades spin inside the engine at 2,500 times per minute and face searing heat and titanic forces. “These are big blades,” says Giorgio Abrate, general manager for engineering at Avio Aero. “We ran a lot of experiments to get the job right.”

The 3D printing factory, which looks like a blue and gray jewel box of steel and glass from the outside, holds 20 black, wardrobe-sized 3D printers, made by Arcam. A single machine can simultaneously print six turbine blades directly from a computer file by using a powerful 3-kilowatt electron beam. The beam “grows” the blades, which are 40 centimeters long, by welding together thin layers of titanium aluminide powder, one after another.

Jet engine designers love this strong, heat-resistant wonder material, also known as TiAl.  It weighs 50 percent less than the metal alloys typically used in aviation. But  TiAl is also very brittle. Until 3D printing came along, the only way to shape it involved molding, a somewhat dirty process that requires expensive tools. “This factory has helped us understand what the art of the possible is with additive manufacturing,” said David Joyce, president and CEO of GE Aviation.

Avio Aero started exploring 3D printing more than a decade ago. At the time, word got out that GE Aviation had used TiAl blades inside the GEnx jet engine it was developing for Boeing’s Dreamliner. “For us to step up and bet the engine on this technology is a big deal,” Robert Schafrik, then GE Aviation’s materials and process engineering general manager, told FlightGlobal. “If it has only 50 percent of the weight of the nickel alloys you’ve got to believe this is here to stay.”

GE cast the blades in a foundry, but Avio Aero, which wanted to go after the emerging TiAl market, bet on 3D printing. “We could see how difficult it was to make these blades,” Abrate says. “But we had positive experiences with 3D printing on a military project.”

The company decided to take advantage of the nearby Joint Strike Fighter assembly plant and set up its additive manufacturing shop nearby. “The location was part of our strategy,” Abrate says. “The Lockheed plant made the town become very visible among aerospace companies. We wanted to promote 3D printing to potential customers and they were all coming here.”

That gamble required access to 3D printers, which Avio Aero obtained by partnering with ProtoCast, an Italian 3D-printing pioneer based in a workshop a short drive from Cameri. “It was really a garage,” Abrate recalls. “We called it ‘the submarine’ because it was so narrow you couldn’t walk past the people working with the machines.”

But early runs with ProtoCast’s laser-powered printers failed. The blades were cracking when Abrate and the team tried to separate them from the platform on which they were printed. The submarine, however, had a secret weapon: a powerful Arcam printer that print parts from TiAl powder. Abrate reached out to Arcam to tweak the machine’s design, make the powder layer thicker and speed up the printing process. Running more experiments, he also learned that preheating the powder before printing removed much of the residual stress from the finished parts. “At that point, we knew what to do,” Abrate says. 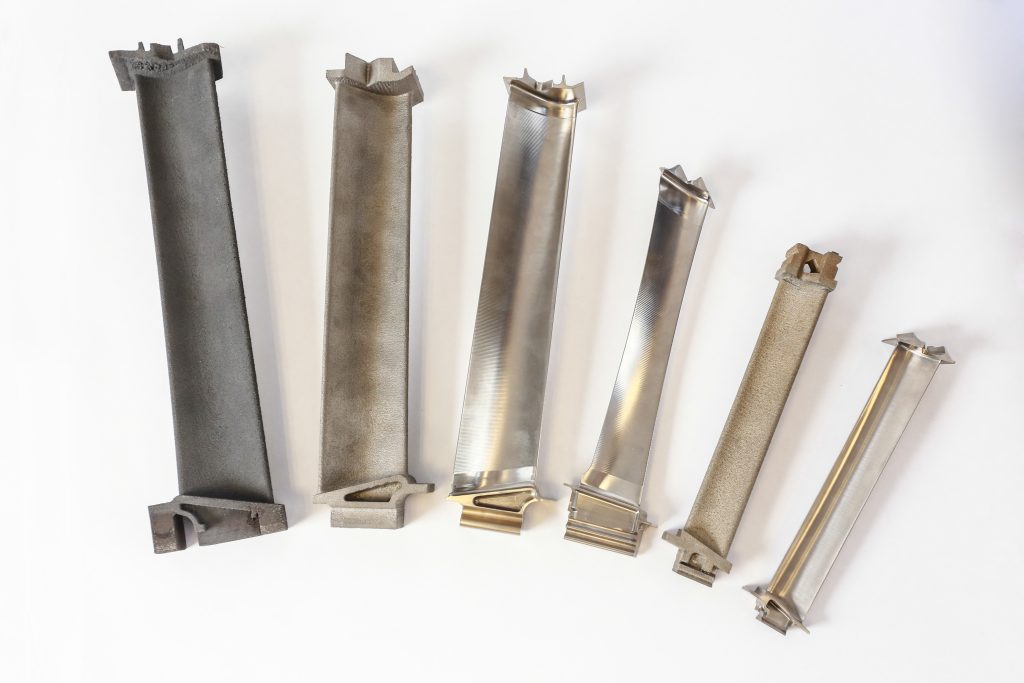 When Avio Aero showed GE what it was doing with the wonder metal, the American company quickly grasped the magnitude of the breakthrough. By then, Avio Aero bought ProtoCast and signed an exclusive agreement with Arcam to acquire a set number of the modified machines. GE Aviation was developing its own 3D printing program near its headquarters in Cincinnati. It was developing a 3D printed fuel nozzle for a new jet engine called the LEAP and working with Greg Morris, the founder of Morris Technologies and another leading light in the additive movement. “They were already convinced,” Abrate says. He says that when GE acquired Avio Aero in 2013, “it was really fortunate because everything accelerated after that.”

The blades from Cameri are already working inside the first GE9X engines, which GE started testing last year. These and other new materials and technologies will help make the engine 10 percent more fuel-efficient than its predecessor, the GE90. That’s a big deal given that fuel accounts for about 19 percent of an airline’s operating costs.

The Cameri plant employs eight specialized hourly workers feeding the machines with powder, removing and cleaning the printed parts, and doing maintenance. There are also nine manufacturing engineers, who keep improving the production process. Says one of the engineers, Dario Mantegazza, about 3D printing: “You have the ultimate manufacturing freedom.”