Full Fathom Five Thy Factory Lies: Machines Are Rising from the Seafloor

GE machines are working deep underground, on the International Space Station, and even in the interstellar space. Now the sea floor is opening up to underwater factories designed to recover oil and natural gas deposits that used to be out of reach.

“This is an emerging technology,” says Alisdair McDonald, business leader of subsea power and processing at GE Oil & Gas, which is building these advanced systems. Pumps, motors, compressors, water-treatment technology and other machines are all going overboard. 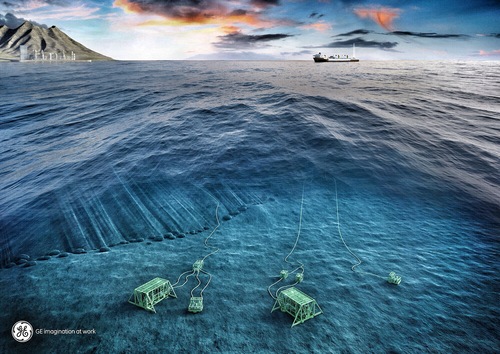 The idea is to take much of the machinery currently mounted on floating platforms and bolt them to the seafloor. “You could imagine doing all the operations you previously would have done topside on the seafloor,” McDonald says. “This would essentially do away with having a floating platform, the capital and operating costs of running it and the risks of having a manned platform out at sea.”

So far, two steps in the petroleum recovery process have landed on the sea bottom. The first one, called subsea separation, isolates oil, gas, and water from raw petroleum coming out of the oilfield into different streams.

The other, called boosting, is helping to push petroleum deposits to the surface.

GE built the first subsea separation and boosting units for the Norwegian oil and gas company Statoil. They operate in 1,115 feet of water about 50 miles off the coast of Norway.