The future of flight is an ever-evolving topic ranging from new supersonic passenger jets to hybrid helicopter-like aircraft that fly more like a plane.

One recent example of such a flying machine is Airbus’ RACER. Short for “rapid and cost-effective rotorcraft,” it combines the versatility of a helicopter — it can hover, and take off and land vertically — with speed and distance capabilities more commonly associated with airplanes. Airbus says the RACER will achieve cruising speed topping 400 kilometers per hour, which would make it one of the world’s fastest helicopters.

The RACER is the flagship concept aircraft for Clean Sky 2, a European Union project seeking ways to reduce aviation’s impact on the environment. Under the Clean Sky aviation banner, more than 600 entities in 27 countries are working together to develop “environmentally benign” aircraft tech, with the goal of reducing fuel consumption and carbon dioxide emissions by 50 percent, nitrous oxide emissions by 80 percent and external noise by 50 percent, compared to 2000 levels.

While some of those fixes can be realized by tweaking a traditional aircraft’s taxiing, landing and takeoff times, Clean Sky is setting its sights higher, focusing on improved wing aerodynamics and other cutting-edge technologies to make a real, sustained and sustainable difference.

That’s where the RACER comes in. Aviation engineers have long sought a flight “unicorn” that’s simultaneously cost-effective, fast and agile, and the RACER meets all those criteria. “The RACER is 50 percent faster than a traditional helicopter, but has lower costs, and brings together several new technologies,” says Tomasz Krysinski, head of research and innovation at Airbus Helicopters. 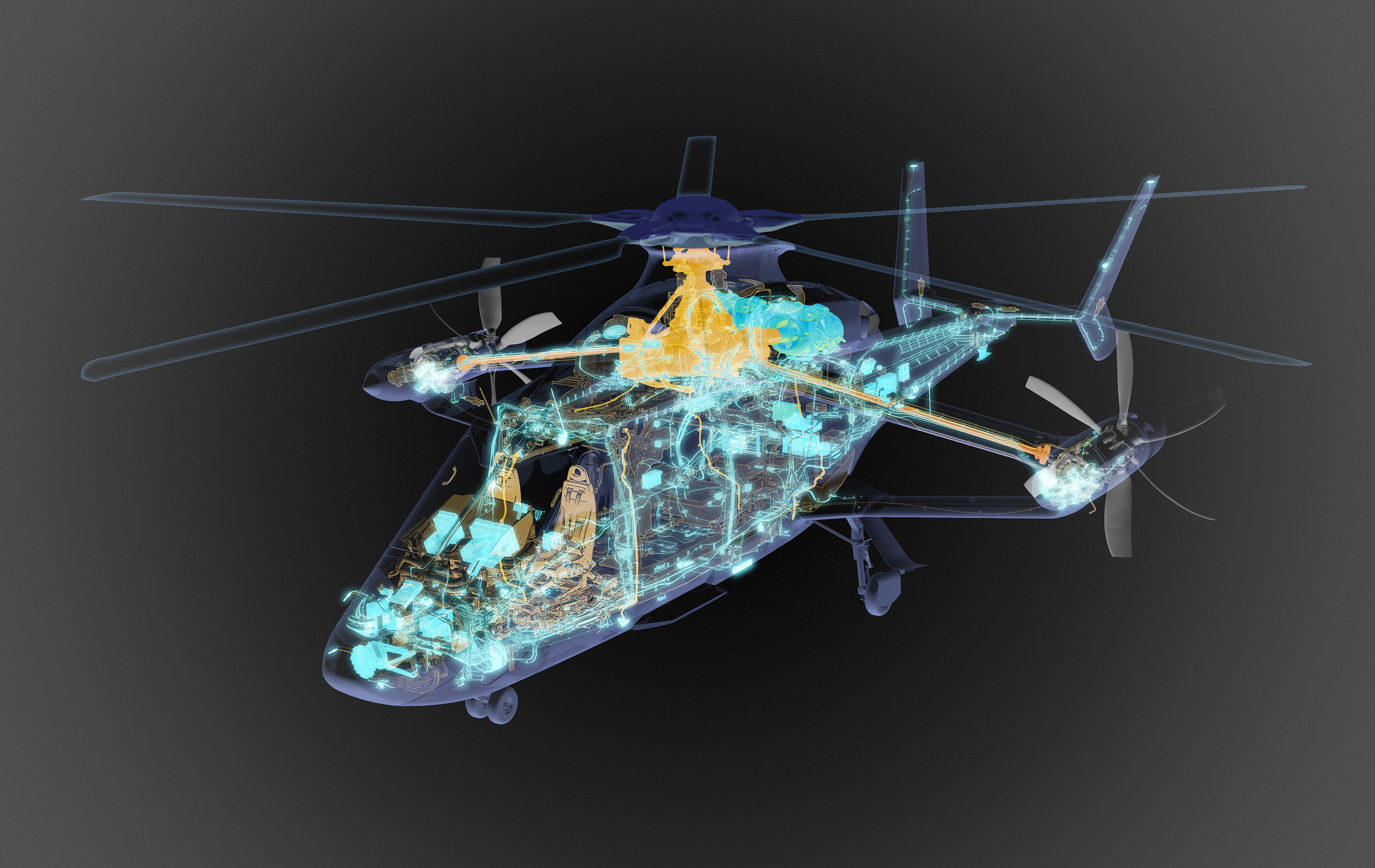 Aviation engineers have long sought a flight “unicorn” that’s simultaneously cost-effective, fast and agile, and the RACER meets all those criteria. Top and above mages credit: Airbus.


The body of the aircraft is shaped like a helicopter. Like a chopper, it has a large rotor on top, but it has no tail rotor. Instead, it has two skeletal “wings.” Each has a propeller that faces backwards, with one moving clockwise and the other counterclockwise. These propellers, combined with the low-drag wings, help the RACER maintain lift while picking up speed.

Some of the technical expertise required to get the RACER off the ground comes courtesy of GE Aviation Integrated Systems, based in Hamble, England, and Avio Aero, a GE Aviation company based in Turin, Italy. They are working on the RACER’s subsystems and components, including the transmission system for both the rotor and wing’s propellers. Engineers in Hamble, for instance, completely redesigned the aircraft’s cradles, the part that connects the wings to the gearboxes. In the past, those cradles were put together with several heavy, premade parts, an approach that wasn’t particularly weight- or cost-effective.

The RACER’s cradles, by contrast, will be made of a lightweight material using 3D-printed casting molds to reduce weight, part count and cost. “This is the first time we’ve ever designed such a complex cast component,” says Paul Mandry, engineering program leader for GE Aviation. In addition to the money saved in construction, the RACER’s lighter weight means significant savings on fuel costs over the lifetime of the aircraft (and a significantly gentler impact on the environment).

Airbus plans to start assembling the first RACER prototype this year. The maiden flight should take place in 2020.

A version of this story originally appeared on GE Aviation's blog The Bike Shop.