Engineering The Future: This GE Tech Will Help Shape The World Of Tomorrow

When a Boeing 787 Dreamliner operated by Air Tahiti Nui took off from the Faa’a International Airport on the Pacific Island of Tahiti last May, the pilots weren’t planning on setting world records; they were flying home French nationals who got stranded there due to international travel bans caused by COVID-19. But when they touched down in Paris 15 hours and 45 minutes and 9,765 miles later, they just happened to complete the longest reported commercial nonstop flight. In 2019, another Dreamliner operated by Qantas and enlisted for a research project flew even further — a 10,000-mile journey between New York and Sydney.

Both planes had something in common. They were powered by GEnx jet engines, which get their edge in part from fan blades made from carbon fiber composites and other technologies GE spent years developing to make them lighter and more efficient. The engines are just one example of the tech the company is working on to help take industries like aviation, renewable energy, and healthcare into the future. Take a look at our list of the most recent innovations. 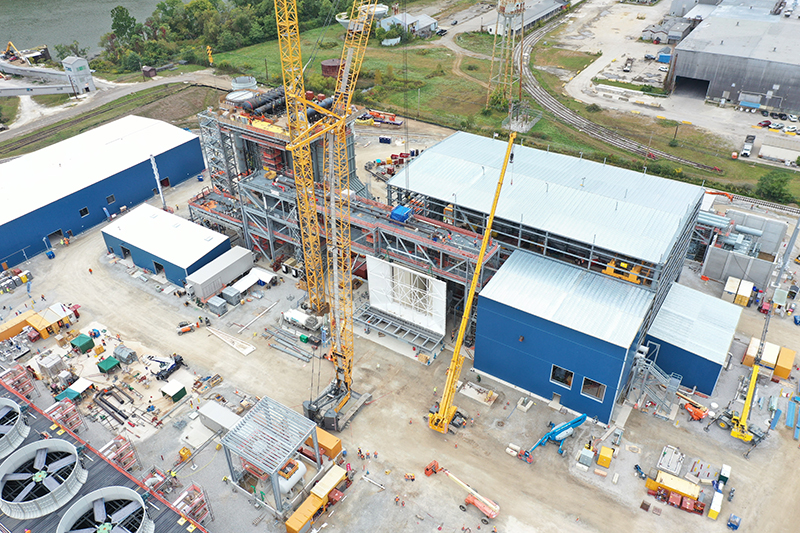 Last fall GE released a report detailing how natural gas can power a low-carbon future: With the output of renewables like wind and solar linked to the weather, gas turbines can step in quickly to keep the electric grid in balance. But natural gas isn’t the only fuel those turbines can process. They can also run on hydrogen, the universe’s most abundant element, which can drastically reduce CO2 emissions at the plant site. And they can also run on a mixture of gas and hydrogen. Now a proof of that concept is rising on the banks of the Ohio River. GE is working on the first purpose-built power plant in the U.S. where a turbine from the company’s most advanced turbine fleet — the HA — will start burning a blend of natural gas and hydrogen and aims to transition to 100% hydrogen by 2030.

Elementally powerful: Scheduled to come online this fall, the 485-megawatt plant in Hannibal, Ohio — operated by Long Ridge Energy Terminal — will have enough capacity to light the equivalent of 400,000 U.S. homes. The technology is something GE has experience with: More than 75 GE gas turbines have already racked up over 6 million operating hours running on hydrogen or hydrogen-like fuels. “It’s something we can do today,” said GE Gas Power’s Brian Gutknecht. At first, hydrogen will constitute 15% of the overall fuel mix going into the turbine in the Hannibal plant, which aims to increase that proportion over time — which would eliminate approximately up to 1.6 million tons of CO2 emissions annually. 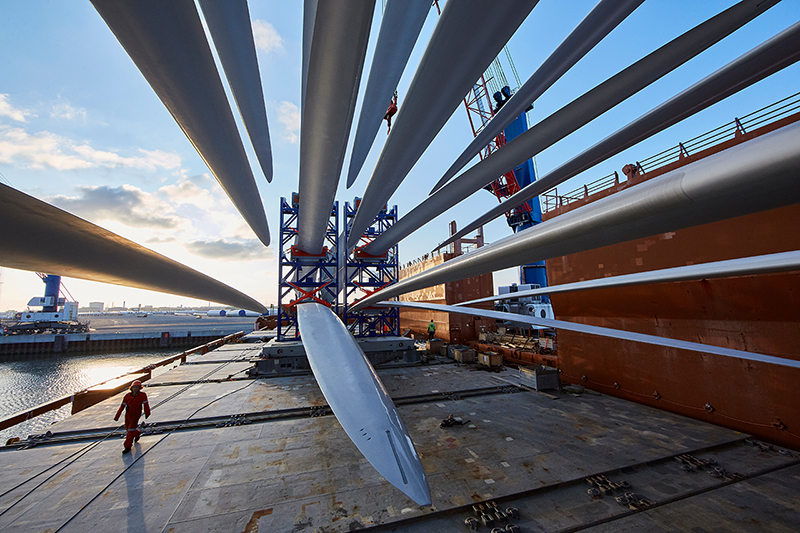 GE has used 3D printing to make parts for jet engines and gas turbines. It now wants to apply additive manufacturing to the way wind turbine blades are made. GE Renewable Energy and the U.S. Department of Energy set up a partnership last month that will 3D-print turbine blade tips that could be lighter and stiffer compared to current designs, and even recyclable.

Fit to print: In a vigorous wind, the last 10 to 15 meters of a spinning wind turbine blade can approach one-quarter of the speed of sound. These sections also capture as much as 40% of the wind energy that spins the generator. That’s why they are the focus of this 25-month, $6.7 million project. GE and its partners will print a full-size blade tip assembled from a 3D-printed, skeleton-like structure, and covered with thermoplastic skin. The GE team and its partners, the Oak Ridge National Laboratory and the National Renewable Energy Laboratory, will test the structural properties of one tip in a lab and install another three tips on a wind turbine. GE Renewable Energy’s subsidiary LM Wind Power, which makes blades for onshore and offshore turbines, eventually may be able to use the technology on an industrial scale. 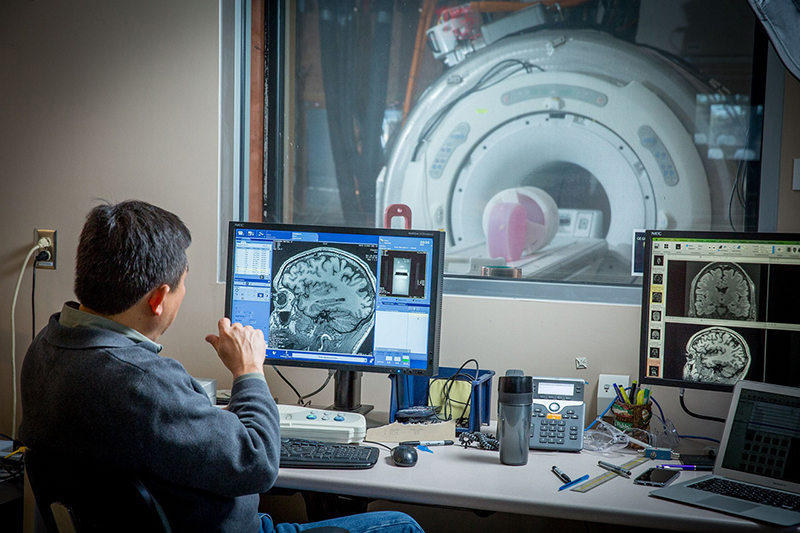 A discovery made in the coldest cold more than a century ago is heating up GE’s wind turbine research. In 1911, Dutch physicist Heike Kamerlingh Onnes found that electrons, which usually lose energy as they careen around an electrical conductor, met no resistance in a mercury wire cooled near absolute zero — the lowest possible temperature of minus 459.67 degrees Fahrenheit. That phenomenon, known as superconductivity, is influential in a host of applications such as speedy computer chips and magnetic resonance imaging (MRI). Now superconductivity may be paving the way to more efficient generators for powerful offshore wind turbines.

How cool is this: Backed by a $20.3 million contract from the Department of Energy, the GE researchers are looking for ways superconducting generators can help lower wind energy costs, simplify the turbine manufacturing supply chain and support the DOE’s goal of nearly tripling wind power’s share of U.S. energy production to 20% over the next decade.

In 1919, GE engineer Sanford Moss tested out a biplane equipped with a turbosupercharger, an engine contraption that enables planes to maintain their power at high altitudes. The technology helped launch the jet age, and it also launched GE Aviation, which celebrates a century of progress by focusing on what’s ahead — way ahead. Moss’s present-day colleagues are working on an engine for the next generation of civilian supersonic jets, which will get passengers from New York to London in just three hours. That’s astonishing technology for the 21st century, but the discerning traveler looking a little further in the future might also prefer the option of hypersonic travel: planes that fly at Mach 5, or faster than 3,500 miles an hour. At that speed, three hours get you from New York to Sydney.

Hyper(sonic) man: Recently GE Reports caught up with Narendra Joshi, advanced technology leader at GE Research, who told us his job is to “imagine what the future could be 100 years from now and to then make it possible.” He said the hypersonic age will require five key elements: “high-temperature materials, heat management technologies, engine design, advanced vehicle controls and technologies controlling emissions.” On the materials front, GE has already got a leg up with the ceramic matrix composites that figure into the advanced jet engines the company sells today. Lightweight and able to withstand high engine temperatures, CMCs might be one of the things that help engineers realize the sci-fi dream of hypersonic travel. It’s these and other advanced materials in GE’s portfolio, Joshi said, “that have us believing it’s not a question of if, but when it will happen.” 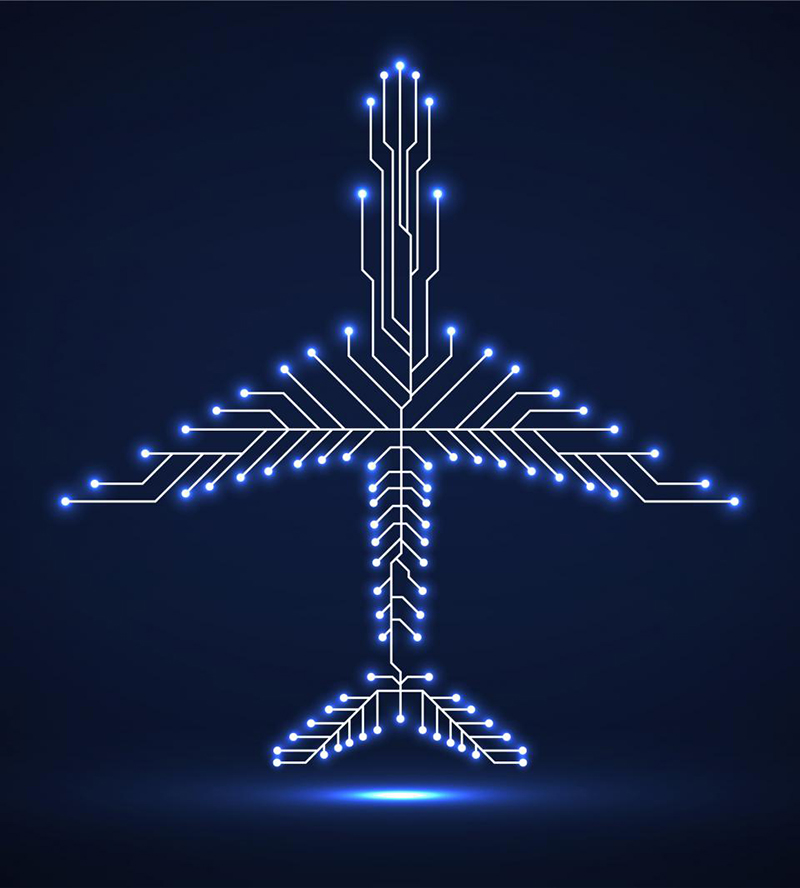 But speed is not the only goal in aviation. In terms of fuel efficiency, commercial aviation has also come a long way: The amount of fuel used per passenger has dropped 80% since 1960. Still, those savings have been offset by the skyrocketing growth of passenger aviation in the same period, leading aircraft and engine designers to search for new ways to reduce aviation’s impact on the environment in the decades to come. “We need something fundamentally different to take the next leap,” said John Yagielski, senior principal engineer at GE’s Global Research Center in Niskayuna, New York. Yagielski and his colleagues are at work on something fundamentally different indeed: an electrically driven propulsion system powerful and light enough to keep aloft a 175,000-pound commercial airliner and its 175 passengers.

2050 vision: That goal is being backed up by $4.8 million in new research grants from the U.S. Department of Energy’s Advanced Research Projects Agency-Energy (ARPA-E) — and it will be no small feat. The challenge is figuring out how to convert a cleaner-burning biofuel into megawatts of electricity, and then how to turn that electrical energy into enough thrust to fly a Boeing 737-class jet. But that challenge is also an invitation for the GE engineers to reimagine what an aircraft engine looks like, drawing up new designs that might be more efficient for flight than the traditional model of engines beneath each wing. “It’s about proving the feasibility of a number of these technologies and convincing ARPA-E to invest in building a complete prototype and testing it,” Yagielski said. “This is for aircraft in the 2050s.

In 1895, the German physicist — and future Nobel laureate — Wilhelm Röntgen was experimenting with an electrified glass vacuum tube when he noticed that it produced mysterious rays that could pass through solid objects. He called them X-rays and launched the field of radiology. Soon Elihu Thomson, GE’s co-founder and first chief scientist, took up Röntgen’s work, designing an X-ray machine that could diagnose bone fractures. And Thomson pushed GE to open the research labs where another scientist, William Coolidge, would advance the field even further — toward technology like computed tomography, or CT. Now engineers at GE Research have helped add another powerful tool to the radiological toolbox — a technological breakthrough that can vastly expand CT’s already impressive imaging abilities and signals a new way to peer into the body.

A new way of seeing: Alongside colleagues at the Swedish startup Prismatic Sensors AB and GE Healthcare, GE researchers invented a new way to capture and analyze the X-rays passing through the body and render them into minutely detailed images. They say their method — which uses a technique called photon counting — could enable doctors to see deep inside the body with greater clarity and specificity, while exposing patients to less radiation than traditional CT scans. Bruno De Man, who leads GE Research’s radiation imaging team, said the technology could help doctors determine whether lung nodules are malignant or benign, obtain details of plaque to accurately diagnose cardiovascular diseases, or image bone microstructure to understand risks to osteoporosis patients. “Those are just three examples of applications that may benefit from this technology,” De Man said.

GE’s first acquisition under Culp: Scientists and engineers have been trying to perfect photon-counting CT for decades. Detectors made from silicon were particularly promising, but they also presented daunting technical challenges. Then a chance encounter in 2015 between GE scientists and Mats Danielsson, CEO of Prismatic Sensors, led to a breakthrough. With his colleagues, Danielsson had figured out the “Deep Silicon” technology that is at the heart of the new photon-counting detector. In an indication of how momentous the promise of this technology is, GE Healthcare announced plans last fall to acquire Prismatic — GE’s first acquisition since Larry Culp became the company’s chairman and CEO in 2018. “We believe this technology has the potential to be a substantial step forward for CT imaging that will benefit millions of patients worldwide,” said Kieran Murphy, president and CEO of GE Healthcare.