“Did you serve in the military?”

It was one of the first things Marissa Helton was asked mere minutes after walking into a holistic doctor’s office. The tip-off? The doctor’s dog had immediately sidled up to Helton, who spent the rest of the visit petting him. As the doctor eventually explained, her dog was trained to work with veterans suffering from post-traumatic stress disorder, or PTSD.

“This was before I told her I was in the Navy,” says Helton, who joined that branch of the armed forces in 1998, at 17, and served three tours aboard the aircraft carrier USS Dwight D. Eisenhower. “Her dog just had a calming effect on me. I don’t know how to explain it. There was a peace.”

Which is exactly what she was seeking. Helton, who is a buyer in GE Aerospace’s supply chain division, had sought out the doctor after suffering a series of panic attacks, each one worse than the previous. The first occurred on Father’s Day in 2011, at a restaurant close by the Ohio River in downtown Cincinnati. The trigger was seemingly innocuous: a large coal barge outside the bay windows, slowly motoring up the river. Seeing the barge, and then being overwhelmed by the rising level of commotion inside the busy restaurant, she was suddenly thrust back to the Eisenhower’s flight deck, where she directed F-14 Tomcats and F/A-18 Hornets during takeoff. She began to shake. She couldn’t breathe. “It felt like I was having a heart attack,” she says.

Because Helton couldn’t move on her own, her husband, himself a veteran, commandeered a wheelchair from the restaurant and took her straight to the emergency room. Over time, her doctors deduced that Helton suffered from the after-effects of her time in the military, in which unspeakable experiences can sometimes become routine.

“I served when we were in conflict in Kosovo,” she recalls. “There are a lot of things that happen around you [in high-stress situations] that are not explained. You’re out in the middle of the sea and you’re 18 years old and one of three females [on your team], so you don’t want to ask a lot of questions. You just want to do your job and fit in. And then something happens that’s just not natural. It’s not natural to pull people from helicopters that are injured or decapitated or whatever it may be. And once it’s done, everything goes back to ‘normal.’ Nobody ever talks about it.” 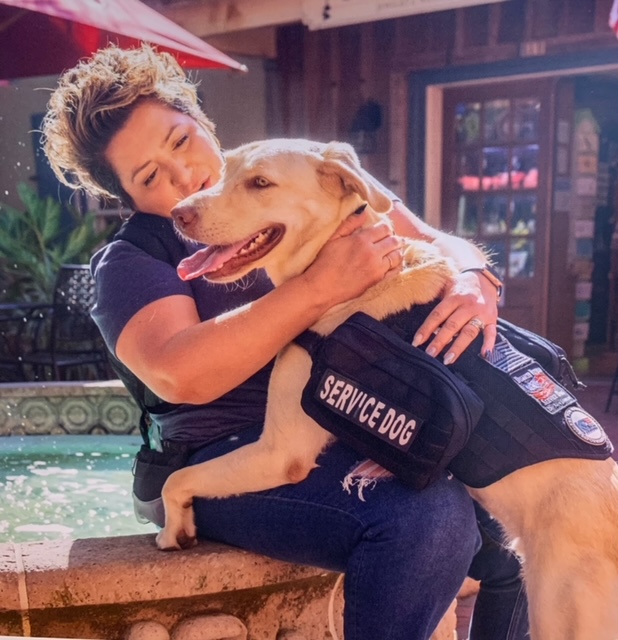 Being diagnosed with PTSD helped Helton acclimate to life after the Navy. But nearly 20 years later, she found herself grappling with two significant changes — a position in GE Aerospace’s supply chain operation and the arrival of her new, highly trained service dog.

Service animals are not simply pets; they are partners that accompany their humans everywhere, helping them to navigate the world by minimizing stressful situations. Helton was on a waiting list for more than three years before she was paired with a yellow Lab named Andy through an organization called K9s for Warriors, based in Jacksonville, Florida. Andy went through nine months of intensive training before he ever set eyes on Helton. When they finally did meet, she had to complete three weeks of on-site training to learn the ins and outs of working with a service dog and to make sure Andy could meet her needs. “They picked him for me,” she notes.

PTSD is, in fact, a disability. But as Helton found out, GE had no problem helping her build a day-to-day plan with Andy. Her supervisor connected her with Steve Prieto, human resources manager in Sourcing, who immediately began working out the logistics. “Steve was very open,” Helton recalls. “He said, ‘We’ve never done this before, but we’re going to go ahead and create a process and figure it out.’”

Now Andy is like another member on Helton’s team. He lies next to her desk. He attends meetings. Wherever she needs to go on the Evendale campus, he goes. Andy has the ability to react to what’s happening and anticipate what’s going to happen next. He has even offered his services to a colleague of Helton’s who was going through a hard time.

“It’s the best thing that has ever happened to me,” Helton says. “He knows when I’m stressed out. He knows when something is too difficult for me. He will jump up on my lap. He starts nibbling at my arm and licking my face.”

Andy centers her, she says. “I know that when he does that, even though I don’t feel like I’m going to have a panic attack, he knows that it’s coming. And so it gives me time to work on my breathing techniques and kind of calm myself down.”

Helton counsels that not all veterans are as open about their need for a service dog as she is, and that’s as it should be. They’re dealing with trauma, after all, so it’s best to let that sleeping dog lie. “Unless they’re willing to share,” she says, “don’t ask.”

For Helton, Andy has become an integral — and very public — member of her family. He knows that when his special service dog vest is on, it’s time to work. And when it’s off, it’s playtime. “I wish I could read his mind and see what he thinks,” she says. “We started this journey together.” And they aim to finish it together, too.