General anesthesia, basically a reversible, medically induced coma, is one of the marvels of modern medicine. Carefully calibrated drugs, ventilators and other technology keep patients breathing and comfortable during their most vulnerable moments — and gratefully unable to recall what transpired on the surgical table. From their perspective, it’s simple: Breathe in, breathe out, wake up in a recovery bed. But for the healthcare providers, it’s a delicate art as well as a science. “Every day I see my patients, we tell them that anesthesia is safer than getting behind the wheel of a car,” says Erica Harris, certified registered nurse anesthetist at Duke University Hospital. “What we don’t tell them is that getting on a plane is safer than going under anesthesia.”

Harris and her colleague Dr. Christopher Young, an anesthesiologist and critical care physician at Duke, have spent the last decade trying to improve and standardize care during anesthesia, developing a reputation as “ventilator whisperers,” Young says. “We all know that variability in care is really not good, unless that variability is a direct response to the individualized needs of the patient,” Harris says. In February, the pair arrived in snowy Waukesha, Wisconsin, to speak to more than 70 GE Healthcare executives and engineers attending GAS III, a meeting organized by GE Healthcare’s Anesthesia and Respiratory Care business, the world’s largest maker of anesthesia machines. They were there to discuss how physicians and technologists can work together to make anesthesia delivery better, safer and more efficient.

One of the key topics they covered was anesthesia’s effects on the lungs. According to Harris and Young, complications linked to lung ventilation during anesthesia in the operating room are second only to skin and soft-tissue infections. “We know that 30 percent of all post-operative complications are pulmonary in nature,” Harris said. Young added that “25 percent of the deaths that occur within a week of surgery are due to pulmonary causes.”

The clinicians would have been hard-pressed to find a keener audience that day in Wisconsin. “Their presentation was incredibly insightful,” says Brandon Henak, global product marketing director for GE Healthcare’s Anesthesia and Respiratory Care business. “We want to help doctors improve care and reduce variability that could lead to negative outcomes.”

Over the last several years, the GE Healthcare Anesthesia and Respiratory Care business has developed a new line of advanced anesthesia machines that help doctors deliver high-quality patient care while also gathering oodles of detailed data about what’s happening with the device and the patient during surgery. The business has recently started using that data to build an analytics platform that gives clinicians a new understanding of their trade that they can use to improve care. The end products are the Aisys CS2, a fully digital anesthesia machine, and Carestation Insights, a suite of applications that crunch data the machine generates. Combined, these tools help clinicians deliver the right levels of anesthetic gas for their patients, more safely and efficiently.

Although the digital platform is still in its relative infancy, early results show it is beneficial for patient care and hospital economics alike, says Matti E. Lehtonen, the engineer who runs GE Healthcare’s Anesthesia and Respiratory Care business. “Building a digital ecosystem complete with cloud-based applications for anesthesia” faced many obstacles, Lehtonen says. “It was a bit daunting, but we strongly believed in the potential. Now everybody talks about it as a total game changer, which I believe it is.” 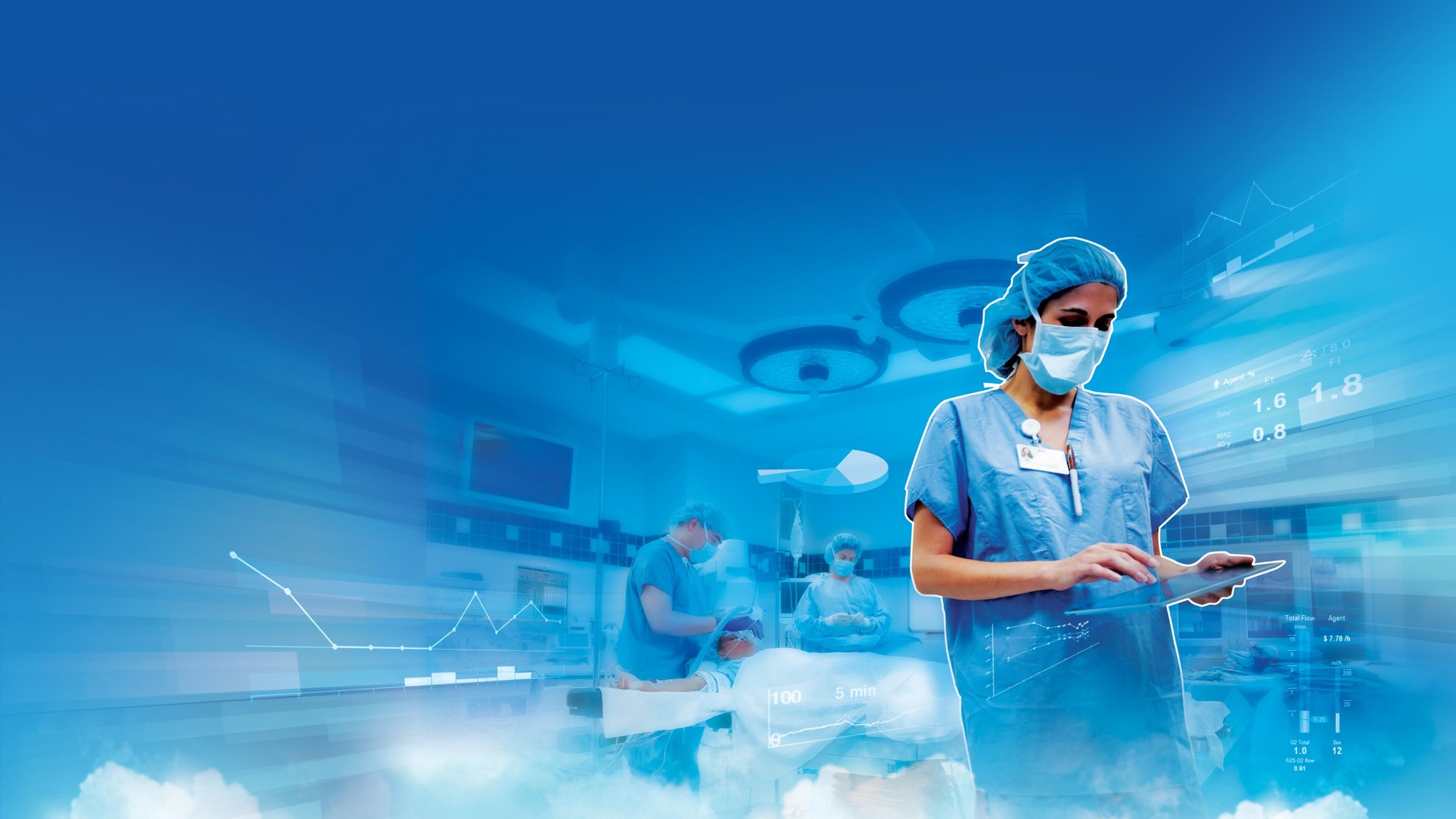 Top and above: GE Healthcare's Anesthesia and Respiratory Care business has developed a new line of advanced anesthesia machines that help doctors deliver high-quality patient care while also gathering oodles of detailed data about what’s happening with the device and the patient during surgery. The business has recently started using that data to build an analytics platform that gives clinicians a new understanding of their trade that they can use to improve care. Images credit: GE Healthcare.


For most of history, surgery was generally a painful proposition. The term “anesthesia” — derived from Greek and meaning “insensibility” — appeared in its medical sense for the first time in 1846, when the American polymath and poet Oliver Wendell Holmes Sr. suggested it to William T.G. Morton, the dentist who performed the first public tooth extraction using anesthesia in Boston the same year. GE Healthcare‘s own Anesthesia and Respiratory Care unit traces its roots back more than a century. Today its anesthesia machines and other technology are used in more than 150 countries, and the business had double-digit growth in 2018. On average, a patient undergoes anesthesia on a GE Healthcare anesthesia machine every 0.2 seconds somewhere in the world.

But now, like GE’s gas turbines and jet engines, the business is going digital. To build the first two apps, Lehtonen and his team enlisted two pioneering anesthesiologists working at the Christchurch Hospital in New Zealand. Dr. Ross Kennedy and Dr. Richard French, whose departments were equipped with the Aisys CS2, had been developing protocols to reduce gas use at the Christchurch institution for more than a decade and were already running a tight ship. But they wanted to mop up any remaining waste.

Not only are anesthetic agents among the biggest expenses incurred by anesthesia departments, they also contain potent greenhouse gases like chlorofluorocarbons. A busy midsize hospital, for example, can generate annual greenhouse emissions equivalent to 1,200 cars.

The team’s very first app, Agent Cost Dashboard, helps hospitals monitor the use of anesthetic gas and the flow rate at which it is administered. “If your goal is to fill a glass with milk right to the top, you can either do it by very, very slowly filling the glass — which is quite painstaking — or you can just keep pouring the milk until it’s flooding over the top and going across the counter,” French told GE Reports. “Either way, the glass doesn’t get any fuller.” The app helps clinicians minimize waste and deliver the right amount of gas to the patient. The second app, Checkout Dashboard, keeps an eye on the anesthesia machines to track daily equipment checks, which help ensure that unready devices don’t delay planned surgeries.

To build the apps, the team needed data. It came from GE Healthcare’s Aisys CS2, which can collect as many as 300 different data points and feed them to the apps for analysis and insights. “All those ventilation modes, all those clinically advanced capabilities that we have on the machine, most people don’t leverage them enough in their busy practice,” Lehtonen says.

The apps allowed the New Zealander anesthesiologists to unlock the machine’s full power. Already a “low-flow” institution, the Christchurch hospital was able to reduce its usage of “fresh gas” — a mixture of oxygen, nitrous oxide and other gases — and the amount of expensive general anesthetic agents, like desflurane, by 12 percent. The apps also revealed that the hospital was still using too much gas when beginning to administer anesthesia to patients and clinicians were able to quickly implement a change. “That’s what data gives you — it spurs you to go looking for the solution to your problems,” French told GE Reports. “If you don’t have the data, you’ll never know to go and look.” 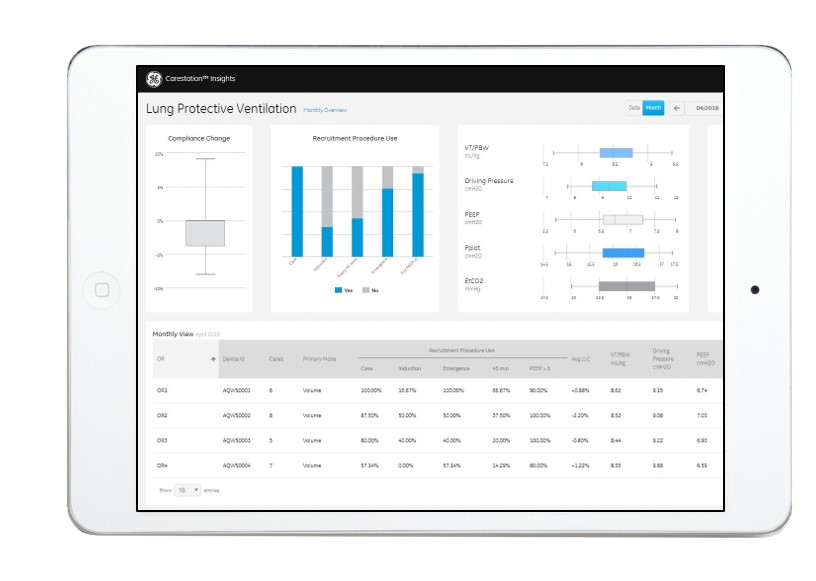 The Lung Protective Ventilation app is designed to "give physicians visibility into their own behavior that they’ve never had before, which will help drive change in clinical practice and may improve patient outcomes,” says Sarah Zhu, global product marketing manager for anesthesia at GE Healthcare. Image credit: GE Healthcare.


Encouraged by early success, the GE Healthcare team moved on to build an app focusing on the problems Harris and Young were trying to solve, specifically protecting patients’ lungs from damage caused by improper ventilation during surgery. When it comes to anesthesia, Lehtonen laments, “the operating room is like Las Vegas. It’s not gambling, but what happens there stays there.” He says that if complications appear during the first 30 days after the surgery, they can be related to anesthesia. But it’s difficult to know for sure “because less data is available,” he says.

Lehtonen says that incorrect mechanical ventilation — supplying too much gas with every single breath, for example — can cause trauma to the lungs and lead to inflammation that can later spread through the body, possibly leading to sepsis. His team’s newest Carestation Insights app, called Lung Protective Ventilation, is designed to help doctors shine new light on the problem. The app analyzes anonymized patient and device data from past procedures, such as the air pressure that remains in the lungs after exhalation — doctors call it PEEP, for positive end-expiratory pressure — and lung compliance, which measures how stiff the lung is. The idea is that the insights from past cases will help doctors adjust ventilation to achieve the best outcomes in the future. “It will give physicians visibility into their own behavior that they’ve never had before, which will help drive change in clinical practice and may improve patient outcomes,” says Sarah Zhu, global product marketing manager for anesthesia at GE Healthcare.

Another set of insights relates to a procedure called a recruitment maneuver, which involves increasing the pressure of the gas supplied by the anesthesia machine and using it to open up the lung to better absorb oxygen. Looking at data, the app can help doctors see how often they used recruitment maneuvers, observe which ventilator settings were used and see how the patient’s lung compliance changed throughout the case. “They can connect the two and understand what they need to do next time,” Lehtonen says. “By creating that visibility, you can also improve adherence to the lung protective strategies the institution has defined. Then you can measure how well those strategies are working.”

Carestation Insights apps, which are available on an annual subscription basis, are already in use in hospitals in Canada, South Africa and Europe, as well as in New Zealand. GE Healthcare is currently in the process of deploying the software at several U.S. hospitals. Lehtonen expects to quadruple the number of operating rooms using the apps by mid-2019.

But the first apps and the digital machine they run on, which GE Healthcare manufactures in Madison, Wisconsin, are just the beginning. One day, real-time data and machine learning could make the apps even more powerful. “We need to do the right thing at the right time for every patient,” says Jack Page, product manager for Carestation Insights. “By seeing what has been done in the past and what effect it had, we can keep striving for this goal.”

But this goal won’t be one that GE Healthcare will accomplish alone. “In the future we want to enable a collaborative ecosystem, one that allows researchers and developers to come up with apps we’ve never dreamed about,” Page says. “We want hospitals to use the technology to solve their problems. We need to provide comprehensive solutions tied to outcomes — an ecosystem, not a single product.”