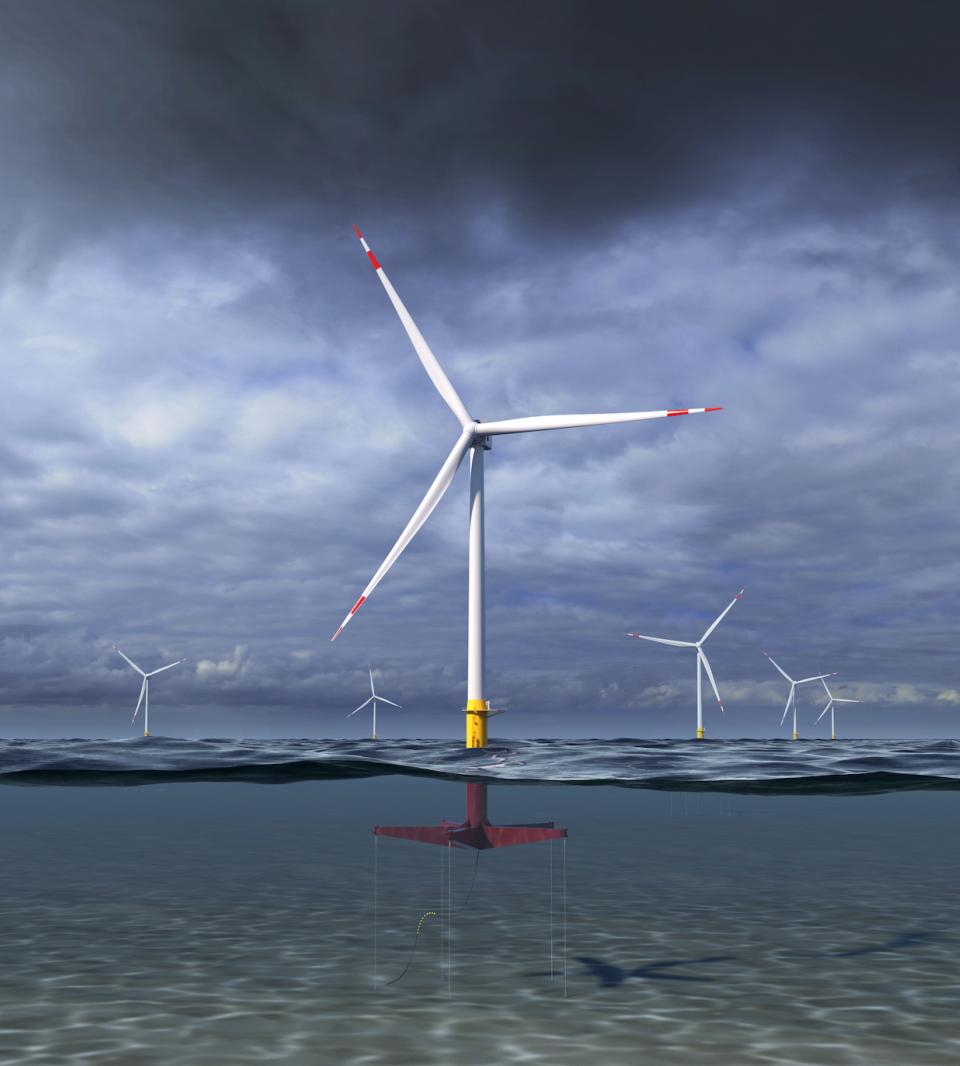 Over the past 20 years, wind power has become an important component in America’s renewables mix. Wind farms have sprouted in many parts of the country, and now they are starting to move offshore. Just two weeks ago, for example, the U.S. Department of the Interior Bureau of Ocean Energy Management gave the final approval to Vineyard Wind 1, America’s first commercial-scale offshore wind farm, near Martha’s Vineyard, which is projected to generate 800 megawatts (MW).

But the sea isn’t the same everywhere. Operators know how to build wind farms in relatively shallow waters like those along the Eastern Seaboard or Northern Europe. But it’s an entirely different story on the West Coast, where the continental shelf quickly drops off.

Rogier Blom, senior principal engineer for controls and optimization at GE Global Research in Niskayuna, New York, is keenly aware of this. That’s what makes the floating wind turbine project he’s working on so timely. “If you travel across America, you can see that wind energy has had an undeniable impact on our country,” he says. “But how can we bring clean wind energy closer to the metropolitan areas along the East and West coasts that have the largest electricity need?”

One solution would be floating wind turbines. And now, Blom and his colleagues have designed a 12-megawatt floating version of the Haliade-X, the most powerful offshore wind turbine in operation today. The concept calls for 853-foot-tall turbines with a rotor diameter of 720 feet that can each generate 67 gigawatt-hours of electricity a year. (Artist's rendering shown above.) Just one of the machines could produce enough electricity to power the equivalent of 16,000 American households. The proposal comes with advanced controls that could allow it to be installed in deep coastal waters.

The U.S. Department of Energy’s Advanced Research Projects Agency-Energy (ARPA-E) ATLANTIS program is sponsoring the concept, which GE developed in partnership with Glosten, one of the leading marine industry innovators.

According to projections of the National Renewable Energy Laboratory (NREL), the total potential production capacity of American offshore wind farms is nearly double the country’s total annual power consumption of 4,000 terawatt-hours (TWh) per year. Of that,  42% could come from traditional fixed-base offshore turbines that can be installed at depths of less than 60 meters. But the remaining 58% of the total potential is locked in deep-water ocean areas with powerful, consistent winds where fixed-base turbines are technically difficult to install and not economically viable.

Making such massive machines float is no simple task. For starters, the team had to put the turbines on floating platforms, the so-called floaters that carry the turbines’ tremendous weight and respond to the constant motion of the seas and wind, explains Blom. “Building a floating wind turbine is like putting a bus on a tall pole and keeping it upright, floating and steady no matter what conditions it faces,” he says. “That’s why the coupled platform dynamics and turbine dynamics must be considered in the design.”

The oil and gas industry has long employed offshore floating platforms, and the common practice is to design the platform and what goes on top of it independent of each other. This, however, leads to heavy platform designs driving up the cost of floating offshore wind.

Blom’s plan instead calls for the 12-MW Haliade-X wind turbine to stand on a “lightweight three-legged, actuated tension leg platform” designed with Glosten. “Active tendons” keep the platform safely secured to the seafloor, while allowing it to ride big waves and reduce the magnitude of the overall mechanical load.

GE’s concept is based on what’s called control co-design, in which the entire system — the turbine and platform, as well as the control algorithms — are designed in conjunction. This in turn makes it possible to avoid putting additional mass into the system to withstand high winds and waves, resulting in a lower levelized cost of energy (LCOE), which is the effective price of electricity generated with the resulting floating offshore wind technology.

A floating armada of offshore wind farms supplying power to American cities is still years away, but the technology represents a potentially abundant new renewable source for electricity. “If you really want to hit your decarbonization goals and use wind, and particularly offshore wind,” says Blom, “floating wind is going to become a key enabler to do that.”