Cooking Up a Business: Local Motors Made the World's 1st Open-Source Car. It's Now Bringing Co-creation to GE

Jay Rogers, a former marine with an MBA from Harvard, and his friend Jeff Jones were still in business school when they hit upon an idea that could one day remake American manufacturing. In 2008, they started an online car company where people could collaborate on design and build their vehicles in a network of local “microfactories.” They called it Local Motors.

The next year, Local Motors produced the world’s first open-source car, the Rally Fighter. The business has since evolved into a “vehicle” company and developed a motorbike, skateboards, motorcycle helmets and other products.

“Today we manage a global community of engineers, consumers and designers that co-creates the product with us,” says Rogers, CEO of Local Motors. “Co-creation is about sharing ideas and working through the same problem together.”

More goods are coming soon. Local Motors just partnered with GE to bring co-creation and micro-manufacturing to the appliances business. 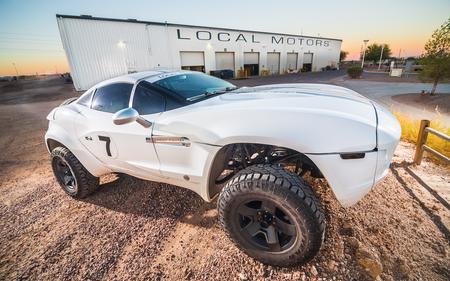 The Rally Fighter is the world’s first open-source car.

Their open collaboration platform, called FirstBuild, will launch next summer. “This is going to be a brand new community of engineers, fabricators, designers and enthusiasts,” Rogers says. “GE is already full of experts and they will meet the community half way. The co-creative process is all about building consumer-connected machines. That’s where the big change happens.”

The idea is that FirstBuild will solve engineering challenges, come up with innovation breakthroughs, and find new market opportunities.

The platform will start by focusing on major kitchen appliances chosen by GE. They will be made at a new microfactory, a specialized facility designed for developing, prototyping and producing a small batch of products at a fast pace.

The partners expect the first products to be available to U.S. consumers by late 2014. GE is also thinking about applying the new approach to other business units.