Catalyze This: GE Teams Up With DARPA To Build Mobile System For Making DNA And RNA-Based Vaccines

Standing in a lab on the GE Research campus in Niskayuna, New York, John Nelson holds up a sample of synthetic DNA inside a vial that is small enough to fit comfortably between his thumb and forefinger. Nelson, who has worked as a senior principal scientist at GE Research for the last 24 years, says there’s enough synthetic DNA inside that half-gram vile to produce an estimated 5,000 vaccines. “It took us under a day to produce this,” he says.

Now Nelson and his team are using their expertise in producing industrial amounts of synthetic DNA to take on a new challenge: finding a way to more easily and quickly mass-produce vaccines globally.

In March, GE Research and its partners were awarded an up to $41 million, five-year project by the Defense Advanced Research Projects Agency (DARPA) to help develop a mobile medical manufacturing platform that will be able to produce DNA and RNA-based vaccines in under three days. This proposed production system is part of a new DARPA program managed by Dr. Amy Jenkins in the Biological Technologies Office called Nucleic Acids On-Demand Worldwide (NOW). The program is funding new technologies to improve the preparedness of deployed troops against bio-threat attacks and emerging infectious diseases.

The GE system could be used by the military to more quickly distribute vaccines and therapeutics, such as some of the recently approved COVID-19 vaccines, as part of humanitarian operations. “What our engineers like to say is that we're taking an entire pharmaceutical processing plant and shrinking it down to fit within a 6-foot by 6-foot by 6-foot framework,” Nelson says.

Of course, anyone who follows the news knows that producing enough vaccines for the entire population during a crisis and doing it quickly is a massive challenge. Mass production of DNA and RNA, the building blocks of many modern-day vaccines, typically takes weeks. The strands have to be assembled from oligonucleotides — short DNA molecules that have to be assembled into the DNA sequence, in much the same way that a puzzle is put together from a bunch of smaller pieces. Typically the material needs to be grown in a lab using living cells before it is used to formulate a vaccine and injected into recipients’ arms.

Nelson, who holds 65 U.S. patents, invented a synthetic method for making DNA in a shorter time and requiring less space and equipment. “If you need a gallon of DNA to vaccinate Albany, that DNA is going to take multiple 500-liter fermenters of bacteria doing it the old way,” Nelson says. “What we've developed is a synthetic method to do that enzymatically” using a much smaller container. 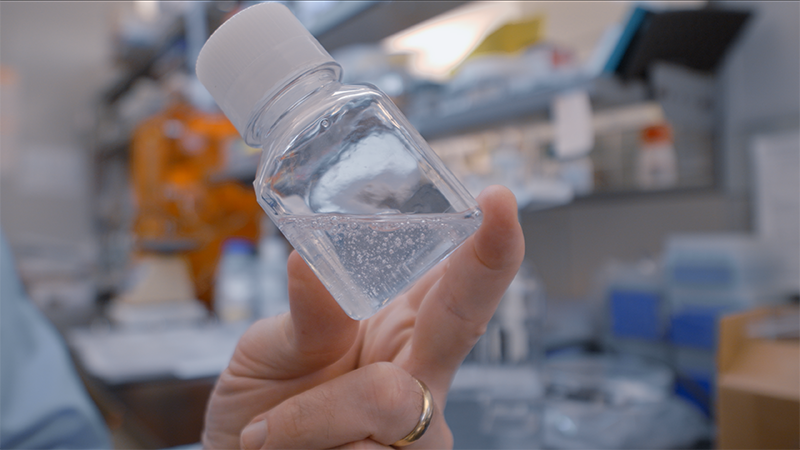 They are using enzymes — proteins that catalyze biochemical reactions — to assemble the DNA and RNA. Unlike bacteria, Nelson and his team don’t need to feed the enzymes and clean up after them. Nelson says the process is like printing the same page of a cookbook and mass-producing a recipe. “We've put the master copy in, we put all of our ingredients in, and we stick it in an incubator,” he says. “When we come back in roughly 10 hours, there are grams of pure DNA there, so we’ve eliminated fermenters growing bacteria and breaking that bacteria open to get the DNA from them.”

The project couldn’t be more timely amid the pandemic. The approach has the potential to be compatible with mRNA vaccines, which are the basis of COVID-19 jabs from Pfizer and Moderna. Those vaccines use messenger mRNA molecules to teach a person’s immune system how to make antibodies to keep a person from becoming sick if they come in contact with the virus.

Nelson along with his colleagues Weston Griffon, Erik Kvam and Brian Davis will oversee this DARPA research with a small, multidisciplinary team at GE Research known as RUN FAST (Rapid Universal Nucleic Acids using Fieldable Automated Synthesis Technology), some of whom have been working for two decades on a faster method for making larger quantities of DNA-based vaccine doses. By combining their expertise in chemistry, molecular biology and engineering with the talents of their partners at the Broad Institute, DNA Script, MedInstill, Molecular Assemblies and the University of Washington, the GE Research team believes it should be possible to integrate all of the steps needed to create a mobile vaccine production platform.

The final assembly, when it is ready, could fit inside a walk-in closet. “Think of this generic box we’re making like a typewriter and a photocopy machine, but for vaccines,” he says. “We first print out the master version, then copy it over and over. Ultimately, what we will have to demonstrate with our box is that we have all the ink that we will need — we have all the tools within there for making these DNA copies — and that the copies that get made will have exactly the right sequence.”

Nelson has worked on many scientific and technological breakthroughs throughout his career at GE Research, including projects to amplify DNA from trace amounts in forensic samples, individual microbes and circulating tumor cells. With RUN FAST, he says he’s most excited about creating something for DARPA that could possibly go on to deliver tangible medical help to people on a large scale.

“I've done a lot of things that are considered novel, but this is a huge project that is trying to hook together a variety of really unique technologies in a completely automated way,” Nelson says. “It's really exciting to know that we're doing something that has never been done before; automating the production of pharmaceutical-grade DNA from scratch."