Brine Science: How Salt and Ingenuity Purify Water for Thousands inAsia and Africa

Early last summer, Sister Mary Ethel Parrot dropped by the office of WaterStep, a Louisville charity fighting waterborne disease around the world, and picked up a pair of tote bags filled with tubing, clamps and other plastic parts. The nun took them on a plane to Uganda, where she had set up a boarding school for girls.

In Africa, Sister Mary Ethel, who is also a trained physicist, helped assemble the kits into a pair of ingenious mini water-treatment systems that look like a cross between a tea kettle and a bicycle pump. The devices use ordinary salt and electricity from a car battery to produce chlorine gas that kills germs in water for 600 African students and nuns at the Sisters of Notre Dame School and convent in rural Uganda. “In Uganda they can get their hands on salt, but not much more,” says Steve Froelicher, an engineer at GE Appliances in Louisville who helped design the system. “With salt, a car battery and some solar panels you could be making clean water for years.”

Froelicher and his colleague Sam DuPlessis led a group of GE volunteers who together with WaterStep designed the device last year. The system runs electric current between two electrodes through a water solution of sodium chloride, a.k.a. table salt. The electrolysis breaks up the salt molecules and frees bubbles of chlorine gas from the brine.

Since its launch at Louisville’s IdeaFestival last September, WaterStep shipped 165 units to Pakistan, India, Kenya and elsewhere. DuPlessis says that the devices are already purifying water for over 127,000 people. They include neighbors of Wesley Korir, winner of the 2012 Boston Marathon, who brought the device to his hometown Kitali, Kenya.

But the Louisville the team is far from finished. DuPlessis and Froelicher are working to reduce the system’s power demand below 30 watts and use solar panels instead of a car battery as the source of electricity. “This lower power level will allow us to use a solar cell alone or with a much smaller battery,” Froelicher says. “We can also eliminate some expensive components while making the system easier and faster to set up.” The GE Foundation has made a grant to WaterStep to manufacture new tooling and lower production costs. Froelicher says that plastic injection molds would make manufacturing simpler, cut costs per unit by $40, and reduce overhead and logistics associated with moving parts for machining.

In Uganda, the devices are already catching and purifying water from large steel barrels that collect rain water running off roofs. They also providing a hands-on chemistry lesson. The nuns in Uganda are using the chlorine generators to teach their students how electrolysis works. 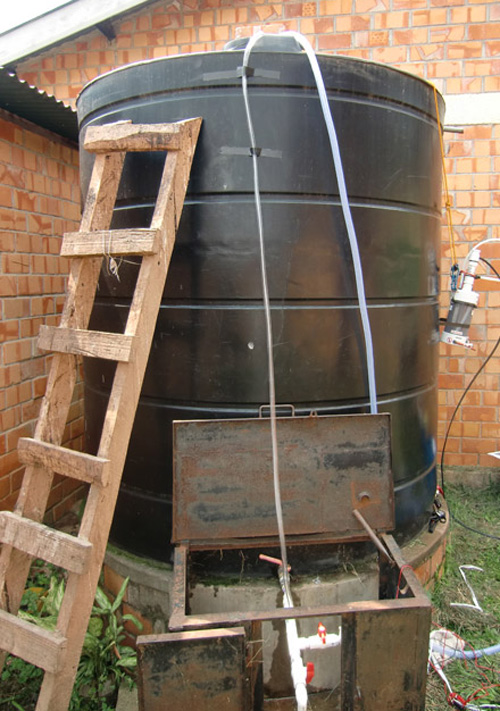