When doctors prescribe drugs for people with chronic diseases, they do so knowing that unwanted side effects on the body can occur. In some cases, it's a matter of risk versus benefit. “When someone gives you a pill,” says Victoria Cotero, a molecular biologist at GE Research, “not all of it goes to work on your disease.”

But what if you could devise a treatment as effective as a drug but with less risk of collateral damage? That question spawned the field of bioelectronic medicine, which combines neuroscience, molecular biology and bioengineering to tap into the nervous system to treat disease and injury without pharmaceuticals. The goal, in essence, is to mimic the action of drugs by applying some form of energy to the nervous system near affected organs — to the spleen, say, to treat inflammation due to sepsis, or to the liver to lower blood sugar in diabetics.

So far, most of this work has involved exposing nerves to small electrical currents. The current acts on molecules on the lining of nerve cells, called receptors, in the same way that a drug molecule would, starting a beneficial chain reaction in the cell. The results are promising, but the approach requires surgery to implant electrodes, which carries a risk of infection.

Fortunately, electrical current isn’t the only form of energy that does the trick. In the last few years, Cotero, part of GE Research’s bioelectronic medicine team, along with scientists from the Feinstein Institute for Medical Research and other GE researchers, have demonstrated that ultrasound may one day provide an alternative to drugs and electrodes. In tests on pre-clinical models, the researchers have used ultrasound to achieve effects similar to drugs on the spleen and the liver, without side effects or surgery. The sound waves exert pressure on the nerve cell receptors, causing them to signal. The team published the research in the journal Nature Communications earlier this year. 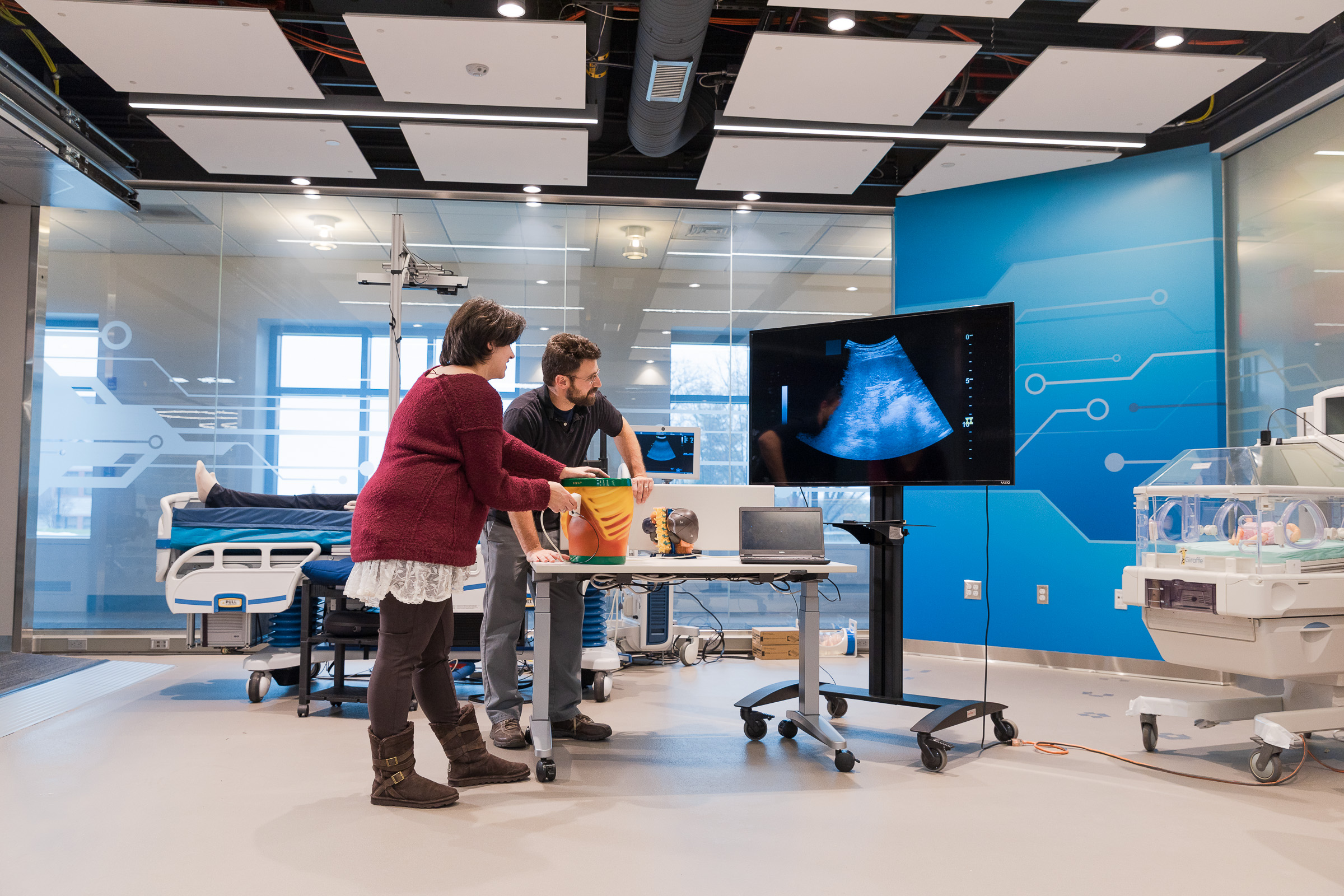 GE's Victoria Cotero and Chris Puleo were part of a team exploring bioelectronic medicine. Their goal is to mimic the action of drugs by applying some form of energy to the nervous system near affected organs. Images credit: GE Research.

Although the work is in the early stages, it suggests that ultrasound is a promising avenue for conditions such as diabetes and sepsis. Because ultrasound has a proven track record of safety — it’s routinely used to check the health of pregnant women and fetuses, for instance — it’s a good candidate for further research.

The GE researchers started doing ultrasound tests on the spleen in 2016. Electrical implants had shown dramatic effects on inflammation on lab rats with sepsis, a condition in which the animal’s reaction to infection causes inflammation throughout the body. The researchers modeled their experiment on this work but with two key differences: They didn’t use implants and, rather than focusing their ultrasound on nerve “trunks” far upstream of the affected organs, they trained their beams on nerves within the organs themselves.

Getting close to the organs yields more dramatic results. That’s because the nerves within organs have more plentiful and accessible receptors — protein molecules that can trigger a beneficial cascade of electrochemical reactions in the organ — than nerves farther upstream. Ultrasound also allows researchers to deliver energy to receptors spread over a wide area, which is common for nerves closer to an organ.

Cotero and her colleagues have also shown in lab rats that hitting nerves near the liver with ultrasound can lower blood glucose levels. The next step is to figure out exactly how the ultrasound works; at some point, it may be appropriate to test its effect on patients. “We have a proof of concept,” Cotero says.

Cotero came to GE in 2010 from SUNY Albany, where she studied how Alzheimer’s disease affects the way the body handles glucose, insulin and other aspects of human metabolism. In the future, with more research and testing, it may be possible to use ultrasound as a treatment option, Cotero says.

“Instead of having to take a bunch of pills, you might not need any drugs,” she says. “Or maybe you take fewer drugs at lower doses, which is easier on the body. You might even be able to administer the ultrasound yourself with a home device. ”