It was around 2 a.m. in early December 2018, and the final day of her anthropological analysis, when Marzena Ożarek-Szilke looked at the X-ray images of a mummy that was believed to be a male priest and made a stunning discovery: the mummy’s belly contained a fetus.

Ożarek-Szilke is an anthropologist, archaeologist and co-director of the Warsaw Mummy Project, a team of archaeologists who are thoroughly examining a collection of Egyptian mummies at the National Museum in Warsaw. She was using GE Healthcare’s mobile RTG X-ray machine to take additional measurements of the “male priest” mummy’s pelvis and bones when she recalls seeing “something light” on a scan.

“I was very tired, and I thought it was impossible that I was looking at a pregnant mummy,” she says. “I asked my Egyptologist husband to come and look. He also saw the fetus, and later we identified a skull and other body parts.”

It is the first known case of a preserved pregnant mummy, according to the researchers, who published their discovery in April in the Journal of Archaeological Science. The ancient Egyptians were known to eviscerate bodies during mummification and bury internal organs in jars near the mummy or return them to the body. The question is, what were they doing when a woman died during pregnancy? It makes this discovery more remarkable since it raises new questions regarding ancient Egyptian religious beliefs. 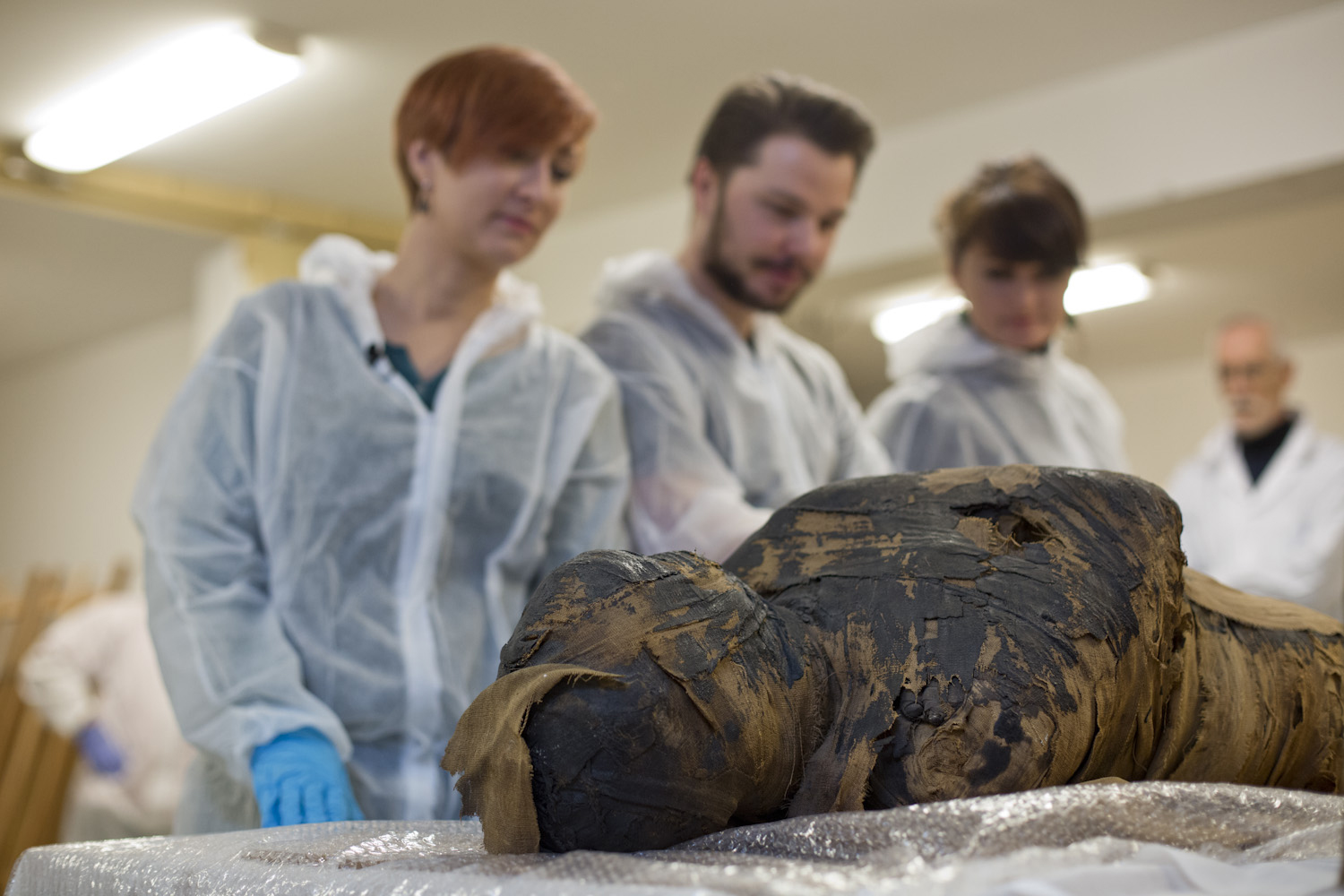 When the pregnant mummy first arrived in Warsaw in 1826, the inscription on the coffin had the name of a male priest. While there were previous radiological examinations over the years, the use of GE equipment for noninvasive imaging allowed the team to determine that it was not a male mummy.

Using CT and GE’s portable imaging technology, they were able to enhance the visualization of the fetus in utero and the surrounding internal organs, which had been mummified separately, bandaged and placed back into the body. The technology allowed the team to study the mummy from various angles, without having to move the fragile artifact. Previous imaging was often distorted, but GE’s software compensated by providing a series of real-time scans that could be stacked, producing a single panoramic image.

Based on the size of the baby’s skull, they estimated that the fetus was 7 months old. The expectant mother, who lived in first-century B.C., was likely between 20 and 30 years old. [1]

Imaging technology is helping to unlock the mysteries of the past; however, there is a long history of X-rays being used on mummies. In 1896, Walter König was the first person to do so, a year after the technology was discovered by German scientist Wilhelm Conrad Röntgen. [2]

“During the first tests of X-ray machines, you had to spend a few hours in the machine to get pictures. It was too long [for living subjects to stay still], so mummies were an ideal use case,” says Wojciech Ejsmond, co-director of the Warsaw Mummy Project and an expert in the archaeology of ancient Egypt.

The researchers say the noninvasive digital techniques are giving them a never-before-seen look at a “time capsule” from the past.

“Sometimes the mummies are marvelously preserved. You can recognize faces, nails are often well preserved, the hairdo — it’s basically a time capsule,” Ejsmond says. “Although we need to remember some of the internal organs were removed, but other things, including the heart, were left as they were.” 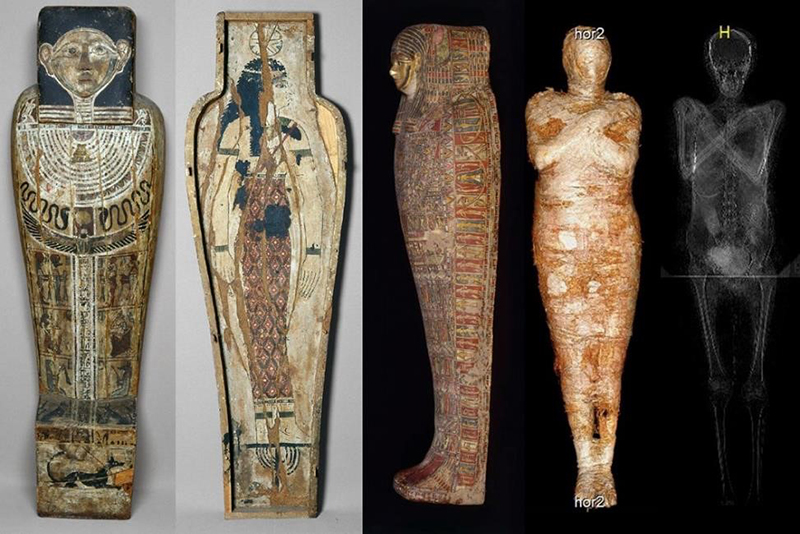 Since the launch of the Warsaw Mummy Project in 2015, the team has used both CT scans and X-rays to examine mummies at the museum. The two technologies are complementary and reveal different information about the mummy, including everything from the person’s age and health to their childhood nutrition, facial features and clues about the society where they lived.

For instance, CT scans can show amulets, the charms and ornaments the dead were buried with, which can help researchers date a mummy and determine the area where the person lived. X-rays can show growth arrest lines on bones, also known as Harris lines, which can indicate periods of poor nutrition or trauma as a child. [3]

The technology can also help detect whether a mummy might be an archaeological forgery. In one case, Ożarek-Szilke examined a mummy at the National Museum that was initially written off as a forgery from the 19th century but seems to be a genuine ancient Egyptian artifact embellished in the 19th century.

“In that mummy, the X-ray image was better than a CT scan,” she says. “When I examined the contents, there were human bones and ancient Egyptian amulets that proved it’s not a forgery. It was just some kind of very unusual mummy. It was a unique case. Previous researchers who were examining similar mummies were labeling them as fakes.”

The technology also serves a practical purpose, since the researchers no longer have to move the delicate mummies and risk damaging them.

“It was very convenient for us because the mummies are in different rooms. Instead of bringing mummies to the equipment, we could bring the equipment to the mummies,” Ejsmond says. “It’s very important because every move is dangerous for the structure of the mummy.”

The first phase of the project, involving radiological examination and analysis of the X-rays and CT scans, is now complete. Moving forward, the researchers say they have big plans to lean on GE Healthcare’s technology, while working in collaboration with GE, to help them learn more about mummies, including everything from what types of viruses they may have suffered from during their lifetimes to creating 3D-prints of their bones and amulets.

“We would also like to take microsamples from the mummies from the inside and the outside to date mummies and learn more about their health and living conditions. We can take blood samples, but we need to work on the methods for such research,” Ożarek-Szilke says. “This is just the beginning.”

A version of this article originally appeared on Insights, GE Healthcare’s newsroom.

[1] Journal of Archaeological Research: A Pregnant Egyptian Mummy from the 1st Century B.C.

[2] American Association for Anatomy: The Use of Conventional X-rays in Mummy Studies

[3] Cambridge University Press: The Ancient Population of the Kharga Oasis