A Good Scrub: GE Mobile Gas Turbines Can Now Meet Some of the Most Stringent CO and NOx Emissions Regulations

The first two decades of this century haven’t been kind to Californians. The ongoing megadrought that is now in its 22nd year is the most severe since the year 800, leaving huge swaths vulnerable to record-setting wildfires. The drought has also left California’s reservoirs, and thus its hydropower supply, at alarmingly low levels. Anticipating a supply shortage if hydropower runs dry, the state’s Department of Water Resources (DWR) acted as procurement agent, commissioning four of GE’s quick-start TM2500 aeroderivative gas turbines to help keep customers’ lights on when natural disasters strike and when hydropower and other renewables can’t produce enough power alone to meet demand.

The four natural-gas-powered turbines, with a combined capacity of 136 megawatts — enough to power the equivalent of approximately 130,000 U.S. homes — were installed by Kiewit Power Constructors at plants in Roseville and Yuba City, north of Sacramento. The units can be started and provide their full power to support the grid within five minutes, at the direction of the California Independent System Operator or the Western Area Power Authority.

In their standard configuration, the mobile turbines, typically used for emergency use, already meet World Bank emissions standards. California, which has among the most stringent emissions regulations in the world, requires even lower nitrogen oxide (NOx) and carbon monoxide (CO) emissions, so GE and its partners needed to develop a solution for its mobile gas turbine.

Carbon monoxide contributes to climate change indirectly by transforming in the atmosphere into ozone (a.k.a. smog) and methane, the second and third most impactful greenhouse gases after carbon dioxide. Nitrogen oxides (primarily NO and NO2, collectively called NOx), meanwhile, can have a great impact on human health. 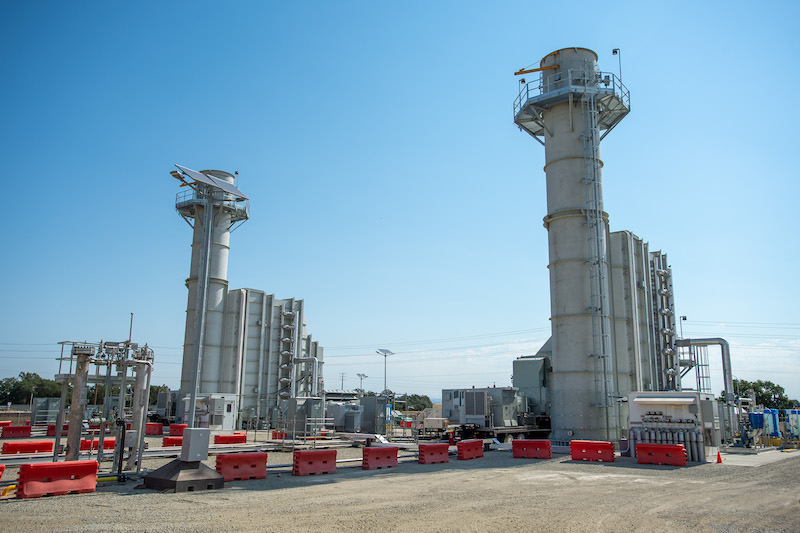 To face this emissions challenge, this June GE worked with DWR to develop a solution for its mobile gas turbines using selective catalytic reduction technology, or SCR. Essentially a catalytic converter like the one on a car’s tailpipe but with a stack that’s 70 feet (22 meters) high, the SCR can cut CO and NOx down by as much as 90%.

One of the virtues of the TM2500 — an aeroderivative turbine, i.e. a reconfigured jet engine — is that it can be mounted on a trailer, towed to a site, and set up quickly, supporting grid operators and power providers facing a grid emergency. 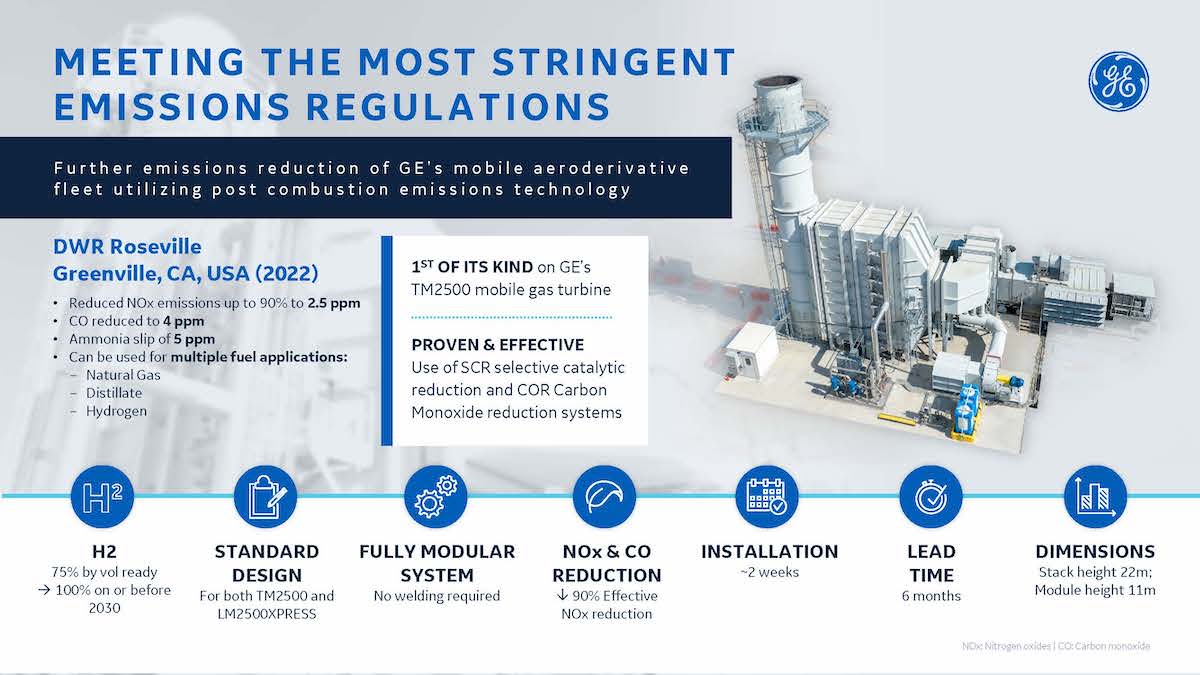 “The TM2500 unit can be installed in just about two weeks,” says Patrick Maher, commercialization leader for aeroderivative power projects at GE Gas Power, who oversaw the SCR project. “We wanted to create a solution for the SCR that can be installed at almost the same speed. It took only a few weeks to put this unit together, thanks to its preassembled modular components.” The quicker installation time translates to lower costs for the customer.

How does it work? “A catalyst is kind of like a honeycomb — very small squares that the exhaust gas from the gas turbine will pass through,” Maher explains. “As the exhaust gas passes through this catalyst, the CO oxidizes to CO2, effectively removing the CO from the exhaust stream.” To reduce NOx requires a second catalyst. The turbine exhaust is blended with vaporized ammonia and then passes through the second catalyst. The reaction converts the NOx into nitrogen and water vapor.

There are more than 300 TM2500s deployed worldwide, with over 6 million operating hours. One recent customer is Switzerland’s Federal Office of Energy, which is installing eight of the turbines at a power plant near Zurich to help meet a possible shortfall of electricity this winter. Now countries like Switzerland and other more advanced nations with stringent CO and NOx requirements have the flexibility to further reduce their emissions as needed using GE mobile gas turbines.

In the future, the holy grail is the ability to operate these turbines with zero- or low-carbon fuels such as green hydrogen. Today these machines are already capable of burning 75% hydrogen, and as the hydrogen (H2) economy grows, GE will be further developing the ability for the TM2500 to burn 100% H2 in its mobile gas turbines, eliminating CO2 emissions during operation. This will eventually give power plant operators the benefit of not only using the quick-start/peaking solutions but also having a dispatchable net-zero carbon-emissions power generation solution that can be used across the globe.

GE is already working to test blends of hydrogen and natural gas. An example is the recent test with the New York Power Authority on a GE LM6000 aeroderivative gas turbine that showed a clear correlation between more hydrogen and lower CO2 emissions, where rates were reduced by approximately 14% at 35% by volume hydrogen cofiring, while NOx, CO, and ammonia levels were also kept below regulatory limits. Still, while CO2 and CO would disappear in a hydrogen-driven world, NOx would remain and solutions like what GE has developed in California will work to keep NOx emissions low.

As with any complex problem, keeping greenhouse gases and other emissions out of the air requires a series of complementary strategies. The flexibility of GE’s aeroderivative gas turbine technology with machines like the TM2500 represents a key tool in the energy mix, given its ability to complement renewable power with fast start times. “It’s a nice add,” Maher says. “Due to its modularity, it’s a cost-effective option, it’s got a low maintenance cost, and it has a lower impact on the environment than prior options.”